Many of the Senior officers, warrant officers and NCOs had come from the 92 Field Regiment, mostly with promotion.  Many of the Junior officers came from the ranks of the Honourable Artillery Company and the Gunners were part of the surge of recruits who volunteered or were conscripted into for the T.A. after the 1938 Munich crisis.

The Regiment was based in South London.  It comprised about seven hundred men and support staff, divided into RHQ and two Batteries numbered ‘366’ and ‘367’.

366 Battery was based in Clapham and undertook its initial training at St Gerard’s Roman Catholic School, 63 Clapham Common South Side, a girls’ school.  The battery also used the nearby open parkland at Clapham Common.  It later used the T.A. Drill Hall on Kennington Road, near to the Oval cricket ground. 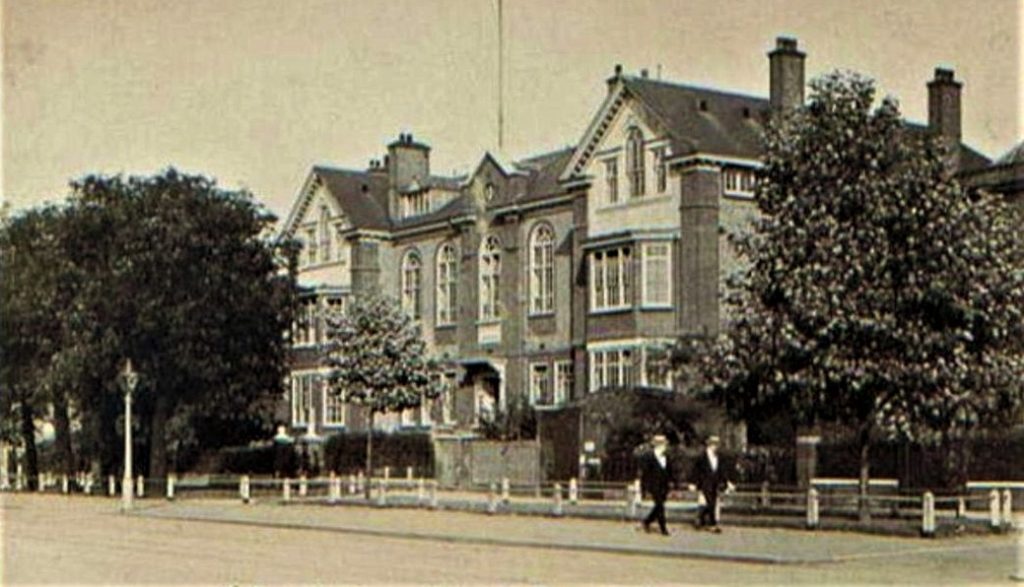 367 Battery was based in Woolwich and used the Drill Hall on Beresford Street, adjacent to the Woolwich Armoury.

The two Batteries subsequently trained together and were sometimes informally referred to as  ‘Clapham‘ or ‘Woolwich‘ men.

The new recruits were mainly young men from the generation born at the end of the 1914-18 Great War.  Some, like my father Eric West, who joined the Regiment on 20th October 1939, had been called up under the terms of the Military Training Act of May 1939, which conscripted men age 20-21 for a six month period of military training and then transfer to the Reserve.  Others were recruited after the outbreak of hostilities.  The result was a Territorial Regiment of young men in their late teenage years and early twenties who mainly lived in the suburbs of London and the Home Counties.

The senior Officers, by contrast, had mostly been born in Victorian and Edwardian England.  They were men in their forties and early fifties who had often seen service as Artillerymen in the Great War, and a few were decorated veterans of that conflict.

This being a Territorial unit, virtually all of the Officers came from a professional background that included undergraduates, a schoolteacher, a solicitor, a barrister, a stockbroker, a journalist, an architect, a surveyor, a civil servant, a bank manager, a research chemist, three members of Lloyd’s and several businessmen.

It is obvious from ‘Grand Party‘ that the Officers and men had a good relationship based on mutual respect and that the Regiment remained a cohesive force, whatever the circumstances.  Brooks describes his role as being a ‘father, nursemaid and friend‘ to his men, as well as a ‘teacher and guide’.

The lessons of the Great War, which of course had taken place only twenty years previously, were etched onto the consciousness of the Regiment.   Lt-Colonel Brook’s account in ‘Grand Party’ mentions visits to the Somme battlefield sites and British Cemeteries that were eerily familiar to the Officers, and over which the Regiment undertook its pre-battle training prior to the German invasion of Belgium on the 10th May 1940.

Many of the Regiment’s Officers had served in the Honourable Artillery Company (HAC) which, to this day, has its headquarters in the City of London.  It is the oldest regiment in the British Army and the second most senior unit of the Army Reserve. 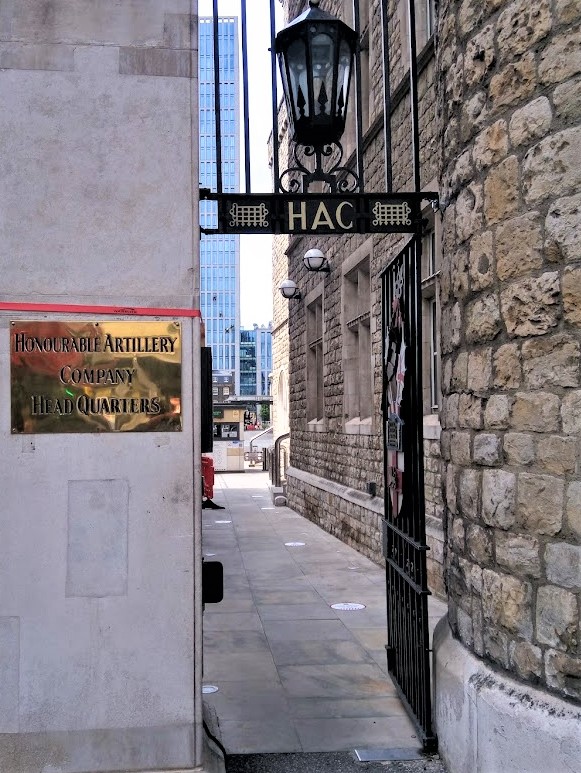 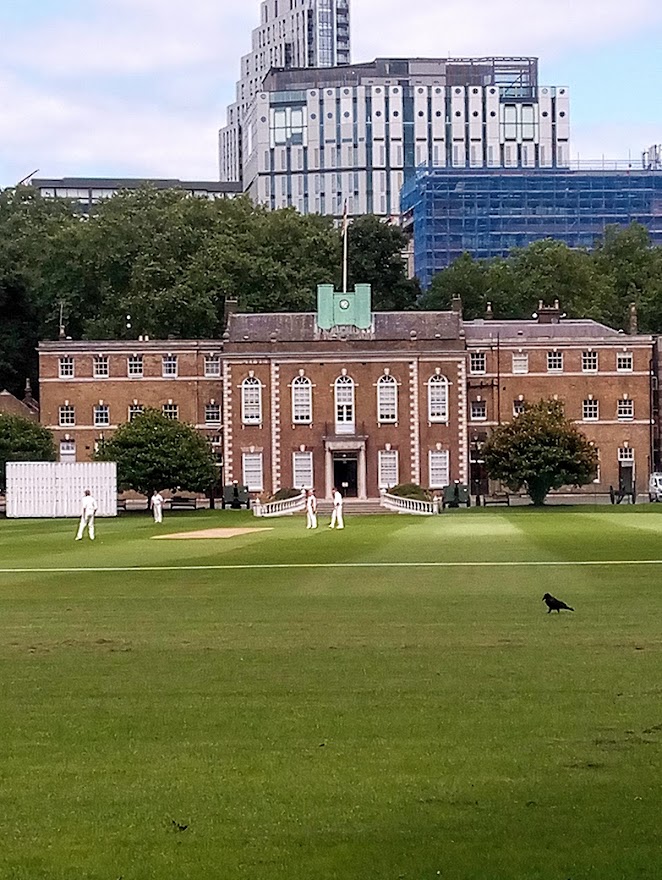 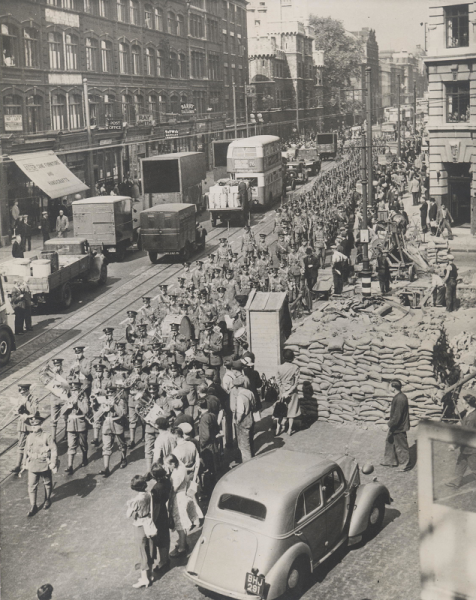 Men of the HAC Infantry brigade marching from the Artillery Garden to City Road, London, 5th September 1939. From https://hac.org.uk/

Biographies and Order of Battle

With assistance from Helen Hood and Martin Felstead, I have obtained biographical details of a small number of the Officers and men of 140th Regiment (**see ‘Introduction’ section).

The ‘Order of Battle‘ of the Regiment and allocation of Officers into each individual Battery and Troop, as far as is known, is set out at the end of this page. 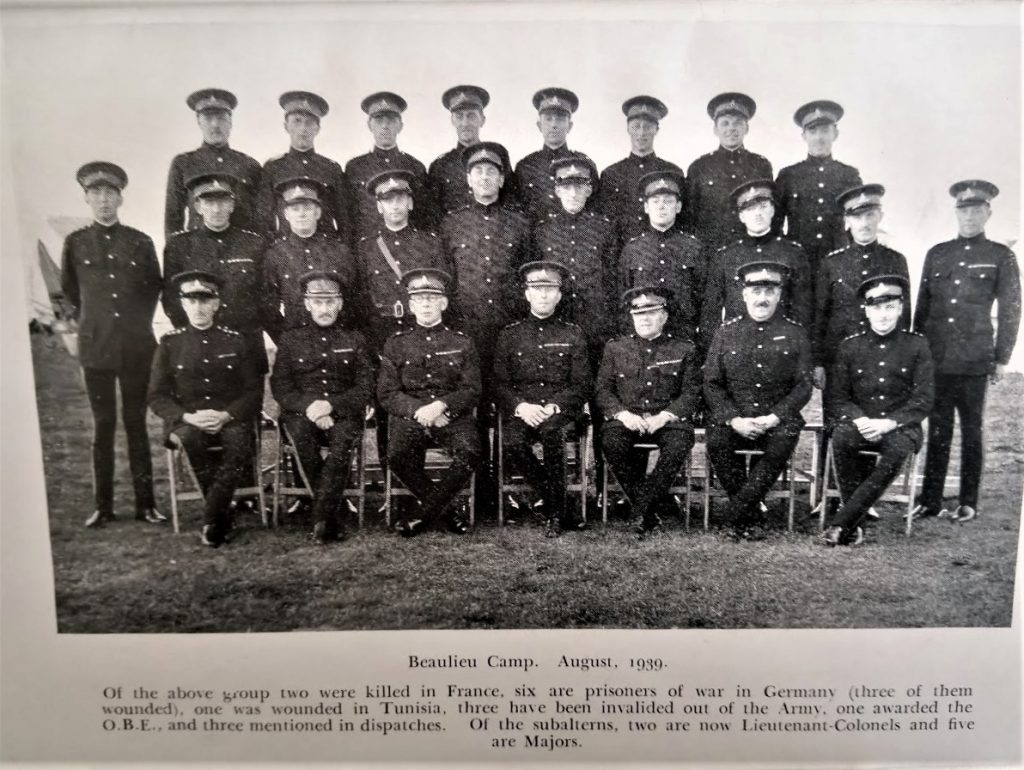 Officers of the 140th Field Regiment at Beaulieu, August 1939

In the early weeks of the Regiments’ formation, basic training took place using mock weapons and the officers often supplied their own private vehicles and bicycles for transport. The two Batteries of the Regiment were each equipped with 18-pounder Field Guns.

The 18-pounder was a quick-firing field gun with the shell and cartridge fixed together.  It was based on a World War One weapon that had been modernised and was mounted on a Mark II carriage with large rubber tyres.  The arrangement tended to make the gun top heavy under tow.  The gun barrel was nickel-steel with a single-motion screw breech incorporating a cartridge extractor.  The sights were on the right of the gun and incorporated a telescope and clinometer for indirect firing in an arc.  The effective range of the weapon could be 3-5 miles, although in the last days of the Battle of Cassel some of the firing was done over ‘open sights‘ directly at German tanks only a few yards distant. 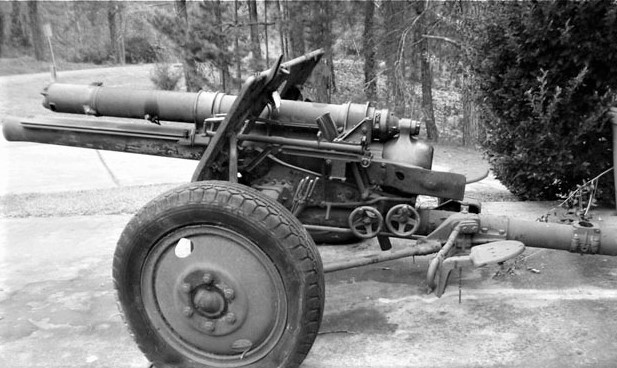 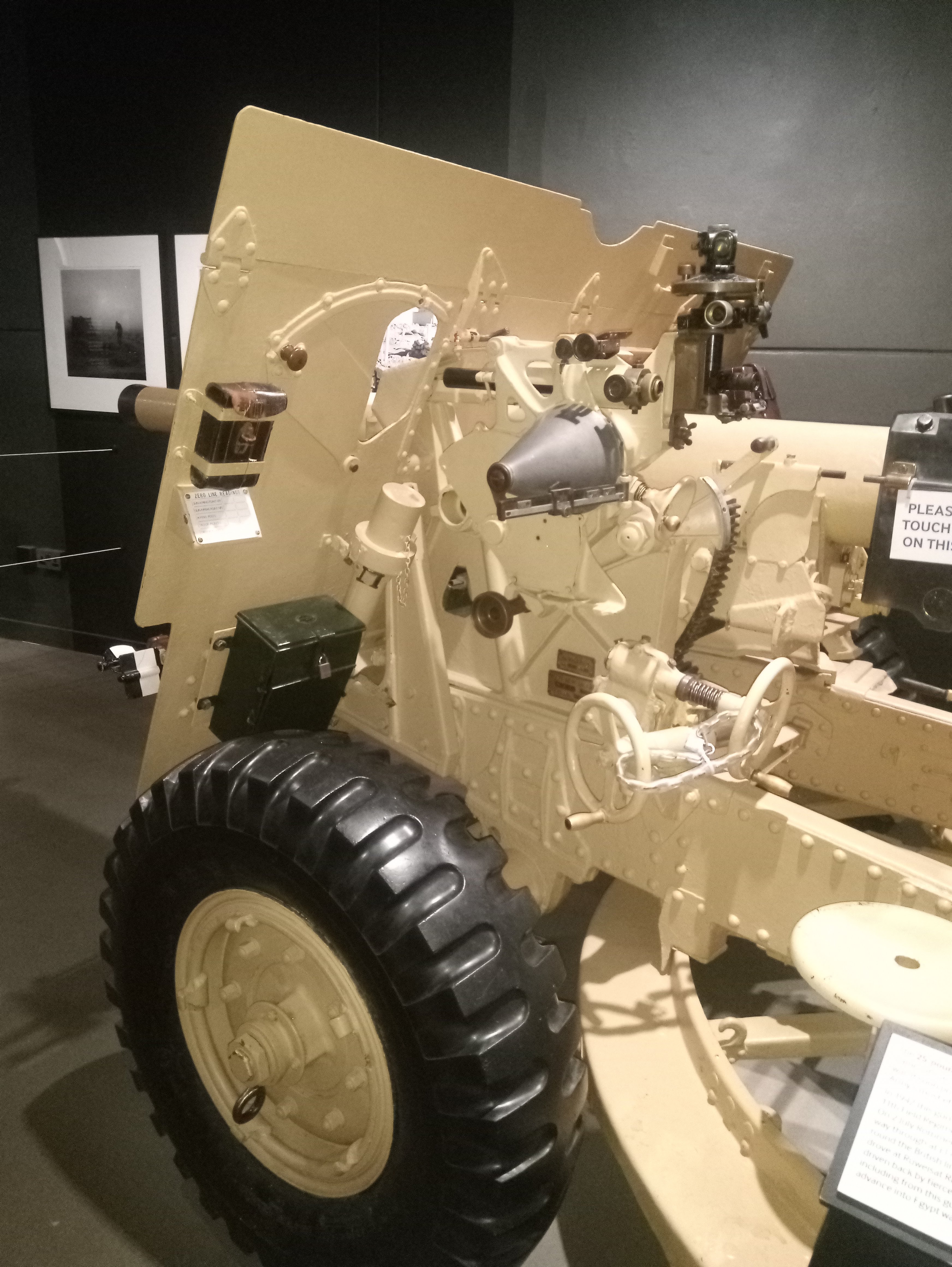 Field gun on permanent display at the Imperial War Museum, London.  Although this example is a later adaption 25-pounder in desert camouflage, it shares many of the 18-pounder features including the sight apparatus, elevation controls, shield and chassis.

The British Army in 1940 (unlike the German Infantry) was fully motorised under a mechanisation initiative and each 18-pounder gun was towed behind a Tractor unit (mainly Morris or Guy ‘Quads’) with an ammunition trailer positioned between the tractor and gun.  The Regiment’s vehicles were identified by a number ’10’ in white on a red and blue background.  These units could manage speeds of nearly 20-30 mph on open roads. 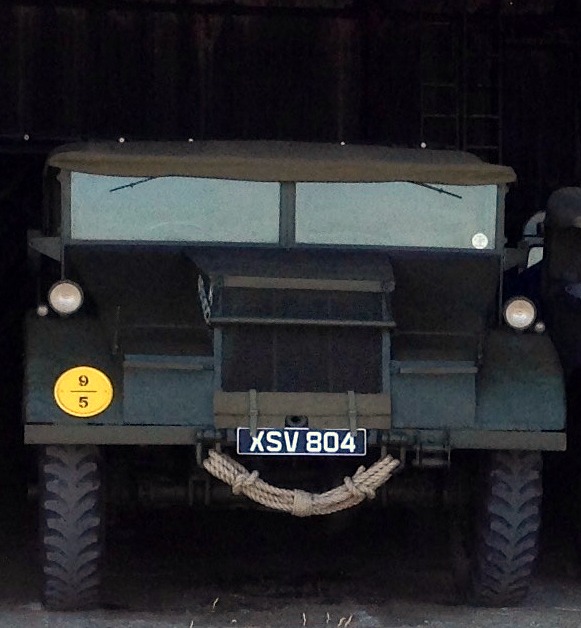 A rare example of a roadworthy Guy Quad, 2019. With thanks to Darren Holmberg 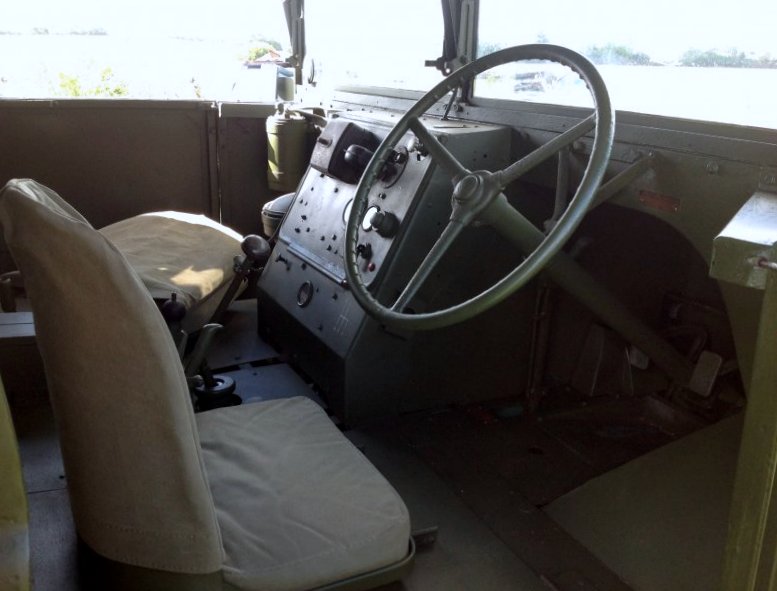 The interior of a Guy Quad gun tractor unit showing driver’s position, with thanks Darren Holmberg.

Royal Artillery as a Fighting Force

The Royal Artillery was extremely successful in World War 2 as it developed through the years with better equipment and organisation.  It was an enormous organisation making up about 25% of the total strength of the army by the end of the war.  It was the primary arm of the military responsible for most of the killing of the enemy and the destruction of his equipment and morale.  Many sources claim the British artillery to have been the best of any nation at this time, and this is primarily because of their communications.

British Field Artillery tactics were organised so as to provide groups of gun strong points, usually camouflaged by trees and supported by communication tracks to supplies and ammunition at the rear and with forward observation posts linked by telegraph wires.

In 1939-40, a Battery was sub-divided into a 12-gun, three Troop arrangement with each Troop sharing radio and communications.  Each gun would have been crewed by six men, a sergeant, in overall charge, the No.3 who was his right hand man, a Lance Bombardier who laid and fired the gun, numbers 2 and 4 loaded and rammed and numbers 5 and 6 fetched and carried the ammunition. 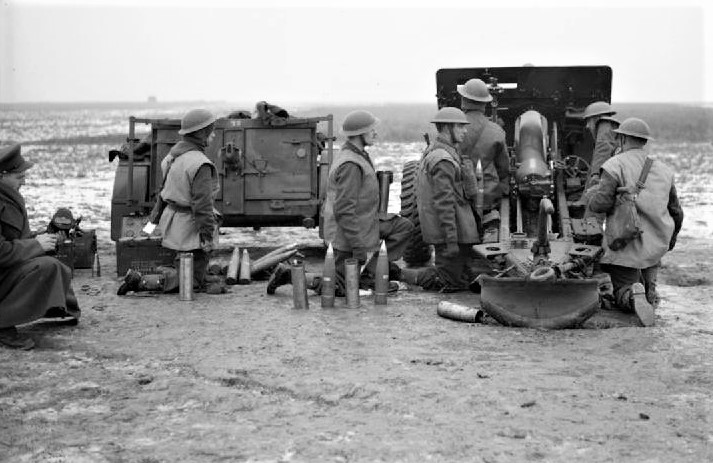 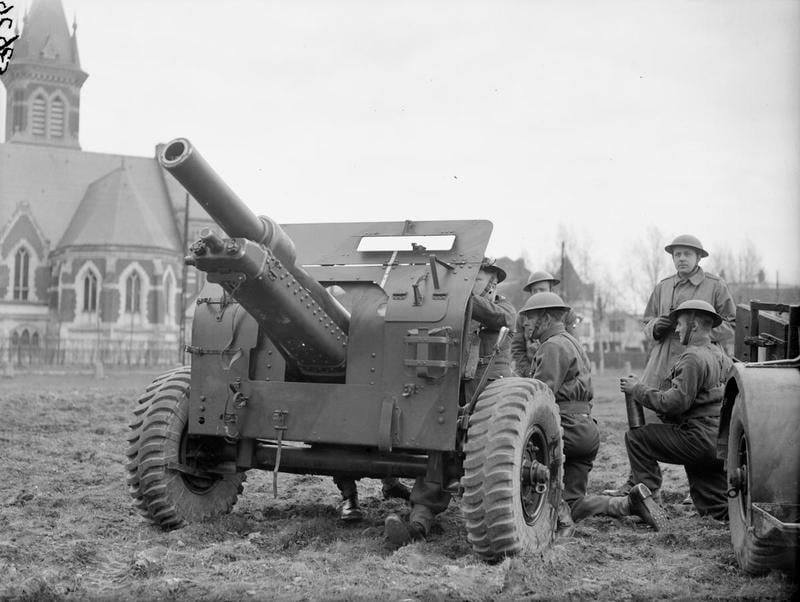 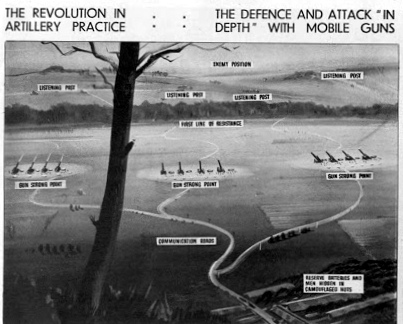 The six Troops were lettered consecutively through the Regiment and named A, B, C (Ack, Beer, Charlie) in 366 Battery and D, E, F (Dog, Easy, Fox) in 367 Battery.

Each Troop had four guns and each gun was known as a Sub-Section, with two guns being a Section.

In action, the empty limber trailers would be swapped and the empties taken back to the battery or regimental dump for replenishment and cycled back. Of course, if the guns were in position for an extended period, and their forthcoming action likely to be static, a supply of ammunition would be built up at the gun position.

Each Troop had three Commissioned Officers, usually a Captain and two subalterns (Lieutenants or 2nd Lieutenants). These filled the three jobs of Troop Commander, Gun Position Officer and Troop Leader (not to be confused with Commander). If the Troop was in action independently their roles were –

Troop Commander (TC)– Having seen the guns into their chosen site, he was to be situated at a Troop Observation Post (OP). From there his job was to personally direct the fire of the guns onto the targets. His “ Fire Orders” were relayed to the gun position by voice (if close enough), Field Telephone (the usual), Morse over the phone or radio, Morse using a single flag or heliograph, or semaphore (2 flags). The Troop Signals Section was responsible for this, including the laying and maintenance of the telephone line. There would always be at least one Signaller with the OP.

Gun Position Officer (GPO) – situated with the guns and responsible for overseeing the receipt of the Fire Orders and ensuring that guns were correctly aimed. This would involve various calculations considering – range, bearing, magnetic bearing variation, height difference between gun position and target and meteorological conditions, all of which affected the flight of the shell from gun to target. Setting the shell fuses correctly and generally making sure that the guns were operating efficiently.

Troop Leader (TL)– usually the most junior of the three officers. His job was to lead the Troop into the gun position once it had been selected. The Troop Commander and GPO would likely have gone on ahead to reconnoitre suitable locations. Once the guns and limbers etc were in position he would take the surplus Troop Transport, the Quads and other vehicles, to a place of safety away from the guns and remain there. The Quads with spare ammunition would be under his command and sent in as required.

The above is the theoretical set up. In more usual practice the Troop would normally be directly under command of the Battery Commander.  In addition to Troop’s OPs the Battery could have one or more of their own meaning that a battery could have several OPs. As a target presented to one of them, the information was relayed to Battery and the Battery Commander would decide what would happen.  It could very well be that all three Troops be given that particular target and for that shoot would then come under direction of the officer at that particular OP, so that he was actually controlling the fire of all 12 guns.

All artillery officers should have been trained to perform all of these functions, as would the Senior NCOs. This enabled men to be swapped around in these roles, and across Troops and Batteries, as the need arose.

Once equipped, 140 Regiment was assigned to join the B.E.F. (British Expeditionary Force) in November 1939.  It was not allocated to a particular Division but was under the control of GHQ and was allocated to individual forces depending on operational need to provide extra firepower to formations that required it.

The two Batteries were in operation together as a single fighting unit until May 23rd 1940 and ‘Grand Party‘ asserts that they were the first B.E.F. Artillery unit to engage the Germans during the Belgian invasion, on the 14th May 1940.

140th Regiment in action in Flanders 10th-31st May 1940 The Route This journey almost follows the Eurostar route from Brussels to London.  As your train departs the suburbs of Brussels and arcs into France, the sites of the B.E.F.'s heroic fighting retreat will flash by your window- Enghein, Tournai, Lille, Hazebrouk, Cassel- and...