This journey almost follows the Eurostar route from Brussels to London.  As your train departs the suburbs of Brussels and arcs into France, the sites of the B.E.F.’s heroic fighting retreat will flash by your window- Enghein, Tournai, Lille, Hazebrouk, Cassel- and as the train slows down to enter the Channel Tunnel, in the far distance, the watchtower at Dunkirk can be seen. 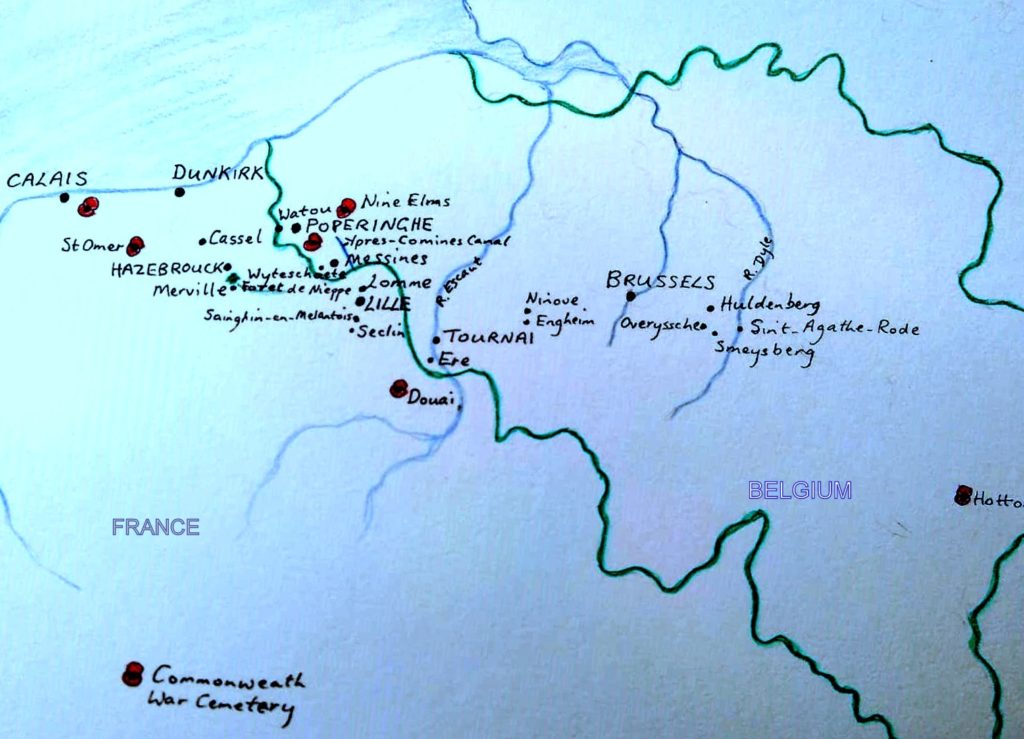 The most easterly point of the B.E.F. advance into Belgium was the Dyle line near the village of Sint-Agathe-Rode; the 140th Regiment’s first wartime action (and the B.E.F’s first combat artillery firing in Belgium) was on 10-16th May 1940 in wooded ground between the villages of Huldenberg and Overyssche facing the River Dyle line.  Some  of 366 Battery’s field guns were positioned slightly to the South in the hamlet of Smeysberg.

Later in the war, Overyssche was to become the site of Europe’s largest POW camp for German solders captured during the Allied liberation of Europe in 1944-45.

The German advance to the South

As the B.E.F was in danger of being out-flanked to the South, the Regiment withdrew from the Dyle on 16th May 1940 through the suburbs of Brussels via Ninove, Enghein to Tournai.

The Regiment’s next major actions, between 19th-23rd May 1940, were at two sites near Wannahein on the Franco-Belgian border (Ere in Belgium and Sainghin-en-Melantois in France) supporting the B.E.F’s new defensive position along the River Escaut (or Scheldt).

On 23rd May the Regiment’s two Battery’s were ordered to separate- 366 Battery was relocated to the village of Seclin, France and then to the Lille suburb of Lomme before crossing back into Belgium for their final action on the Messines ridge near Wytschaete as part of the 5th Division’s defence of the Eastern corridor to Dunkirk.

Many of 366 Battery’s men subsequently escaped via Poperinghe to the Dunkirk beachhead.

On 26th-29th May, 367 Battery saw its final and desperate action as part of the ‘Somerforce‘ garrison at Cassel.

The majority of its men were captured at Cassel or near the Belgian frontier town of Watou while attempting to break out towards Dunkirk on 30th May 1940.

I’ve visited all these combat sites, and the Royal Artillery Regimental flag features in some of the images.

The main Commonwealth War Grave Commission (CWG)  Cemeteries where the 140th Regiment 1940 casualties are buried are in Hotton and Nine Elms in Belgium and Cassel, Douai,  St Omer, Calais, Lille and Dunkirk in France.

I’ve attempted to visit all these Cemeteries and some of the 140th Regiment’s graves and family inscriptions have been photographed in the pages that follow.  It has not been generally possible to locate those family members and so I apologise for any distress these images may cause.