On 24th May, 366 Battery, now separated from the 140th Regiment, heard a BBC radio broadcast by King George VI which appeared to support rumours that the B.E.F’s situation was deteriorating.  An abandoned N.A.A.F.I. store in Lille had replenished supplies which included copious bottles of Cointreau.  The men were able to combine this with their supply of cigars from the Dyle line.  Their guns were in action for most of 24th May, with heavy return fire from the German positions, now directly to their South as the Escaut line had by now been breached.

On the evening of the 24th May, there was news that the Germans had taken Carnin, a town 12 miles to the South-west.  The Battery was ordered to face them by relocating about 7 miles to the South-west astride a ‘river’ in the small town of  Seclin, to cover a 5-mile front under the command of a ‘Mossy’ Marshall  (I suspect the ‘river‘ and site referred to in ‘Grand Party‘ is actually the Canal de Seclin in the area of  the Parc de la Deule).  Observation posts were set up in Fort de Seclin (now a military museum) and Fort Vendeville, both on the D952 road. 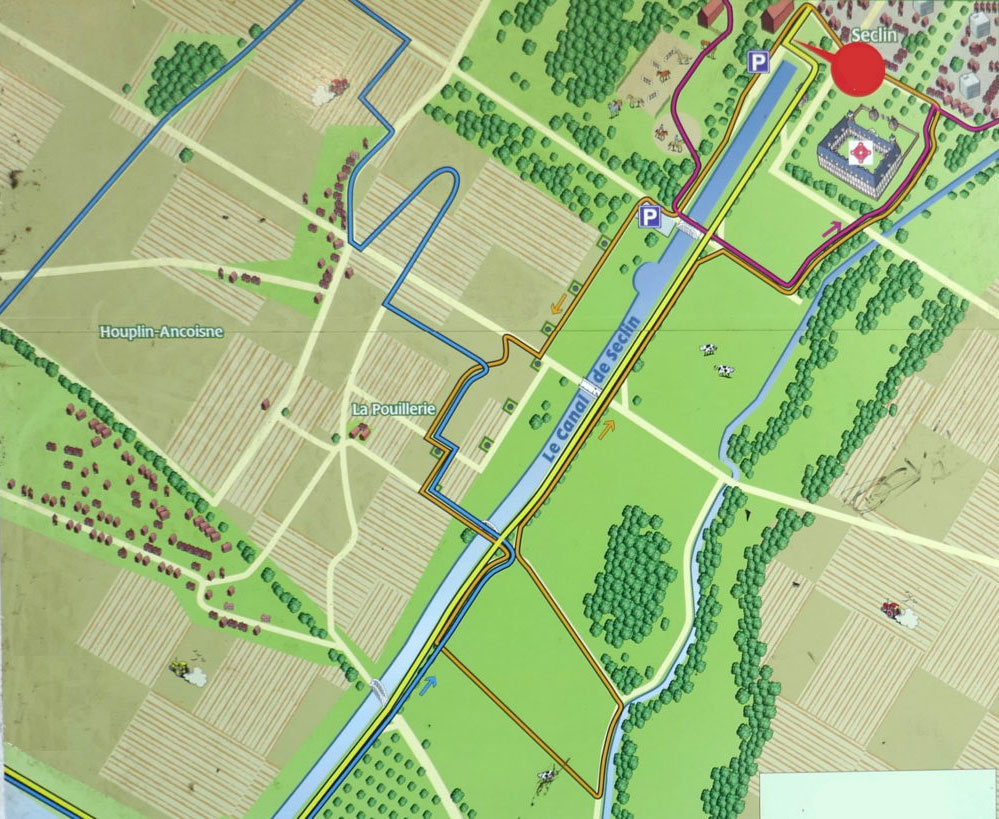 The Canal de Seclin line, 366 Battery’s guns were positioned along the left bank of the canal in this image 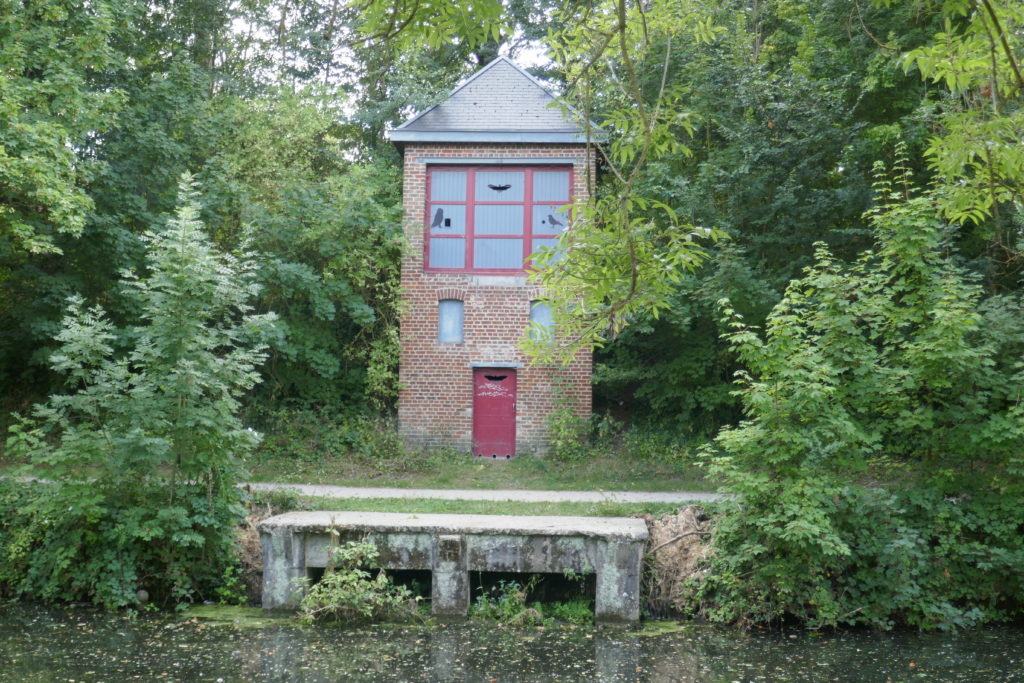 The Canal de Seclin looking towards the German advance 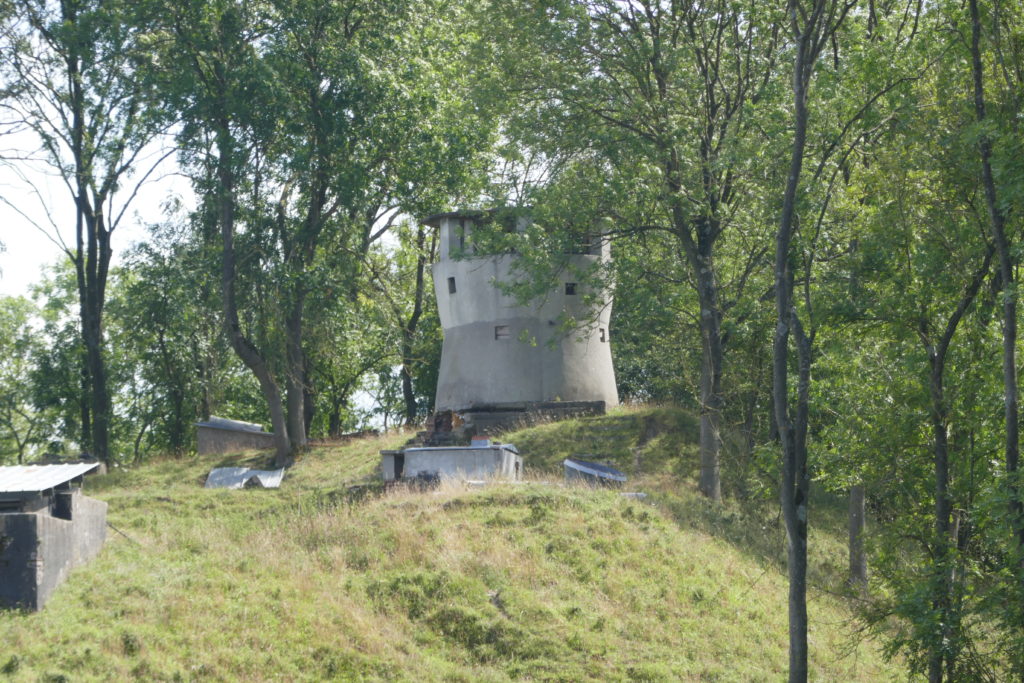 Seclin came under heavy air attack, as the Germans mistakenly thought French HQ was there, and during the battle Sergeant Bartley was shot in the back by a sniper near Fort Vendeville.

On the evening of the 25th May, Lt. Col Brooks was sent for by Brigadier G.W. Sutton, Commander of one of the Infantry Brigades, who ordered a re-location to Lomme, at that time a prosperous tree-lined suburb of Northern Lille about seven miles to the North of their position at Seclin.  On arrival at Lomme, the Battery was billeted in a girls’ school, which reminded the men of their 1939 training days in Clapham.  The intention was to protect a line along the River Lys, but before the guns had been positioned, another order arrived to proceed to Ploegstreet, about seven miles to the North across the Belgian frontier.  The Battery was now to join the British 5th Division under the command of Brigadier John Barry, R.A., based at British HQ in Ploegsteert. 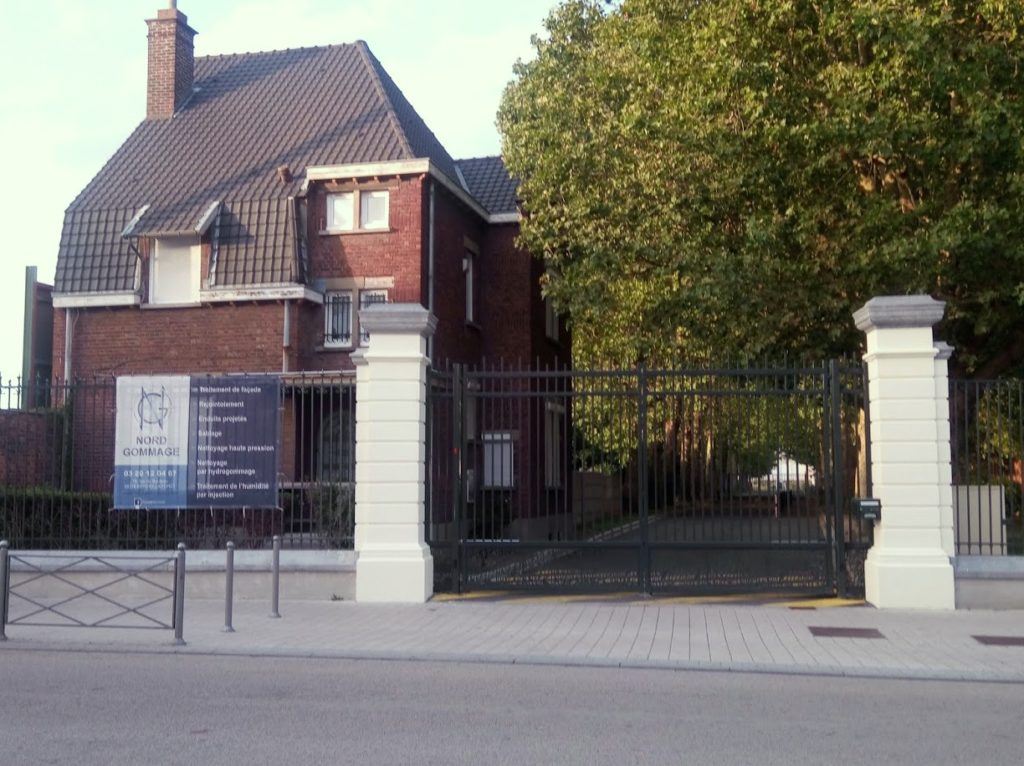 They were to protect the Eastern sector of the Dunkirk escape corridor.  The line comprised the disused Ypres-Comines canal that runs from North to South and is overlooked to the West by the higher ground that comprises Messines ridge, the scene of fierce fighting in the Great War.

The retreat of the Belgian Army in the North, and the French to the South, had created large gaps through which the Germans were able to attack the British flanks.  This left the B.E.F. trapped in a pocket under severe pressure on three sides.  As a result, on 25th May Lord Gort decided to evacuate the entire B.E.F. via Dunkirk.  However, if his troops were to reach Dunkirk, Lord Gort realised that he had to hold an escape corridor to the port.  British troops were therefore re-deployed to defend the Dunkirk corridor.  The base of the pocket was held by the French.  The 5th Division, protecting the Eastern corridor, was in position by 26th May.  Meanwhile, the Western corridor was to be held via a series of defended strong points (including Cassel, where 367 Battery was to be engaged).

The Ypres-Comines canal was unsuccessful as a waterway and had been abandoned in the inter-war period.  It was merely a reedy depression, bordered by a low embankment, and was not a formidable obstacle.  The 5th Division was outnumbered by three-to-one and so defending the canal line was going to be an enormous challenge.  However, 5th Division had one major advantage as six field regiments of Royal Artillery, including the nine guns of 366 Battery, plus five medium regiments, had been strategically positioned above the canal on the Messines Ridge. 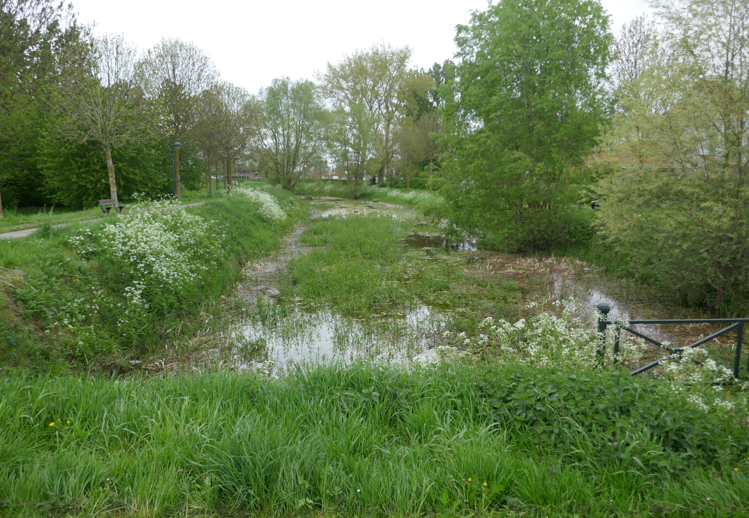 The Ypres-Comines Canal at Comines in 2019 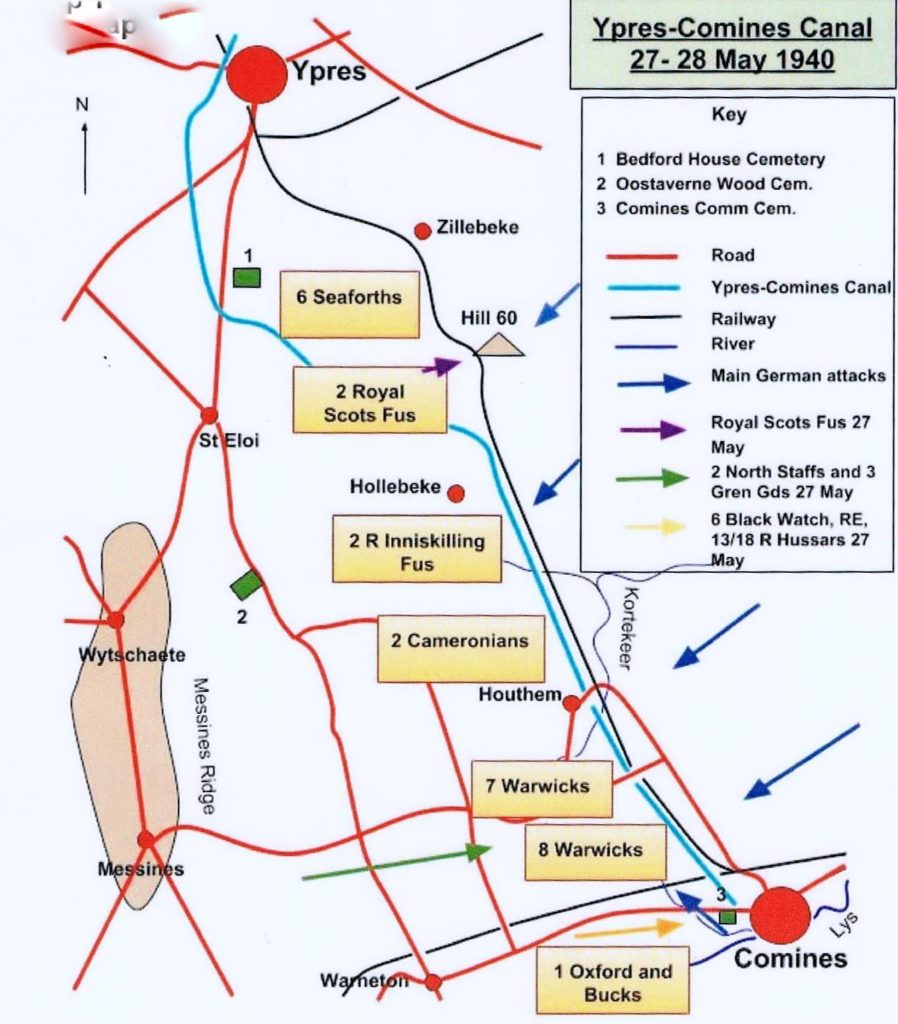 The Ypres-Comines canal line, courtesy of Guided Battlefield Tours Ltd. 366 Battery was positioned alongside other RA units on the Messines Ridge.

The Artillery, by taking advantage of the excellent observation from the ridge, were able to break up many German attacks.  Ironically the British artillery found itself in almost exactly the same position as the German front line artillery that had faced to the West in the great Ypres battles of 1917.

The Germans began probing attacks on 26th May and launched a full scale attack on 27th May.  All along the line the Germans made breaches in the British defences.  A crisis developed by the afternoon of 27th May, and a German breakthrough here would have threatened the corridor along which the B.E.F. was streaming towards Dunkirk. 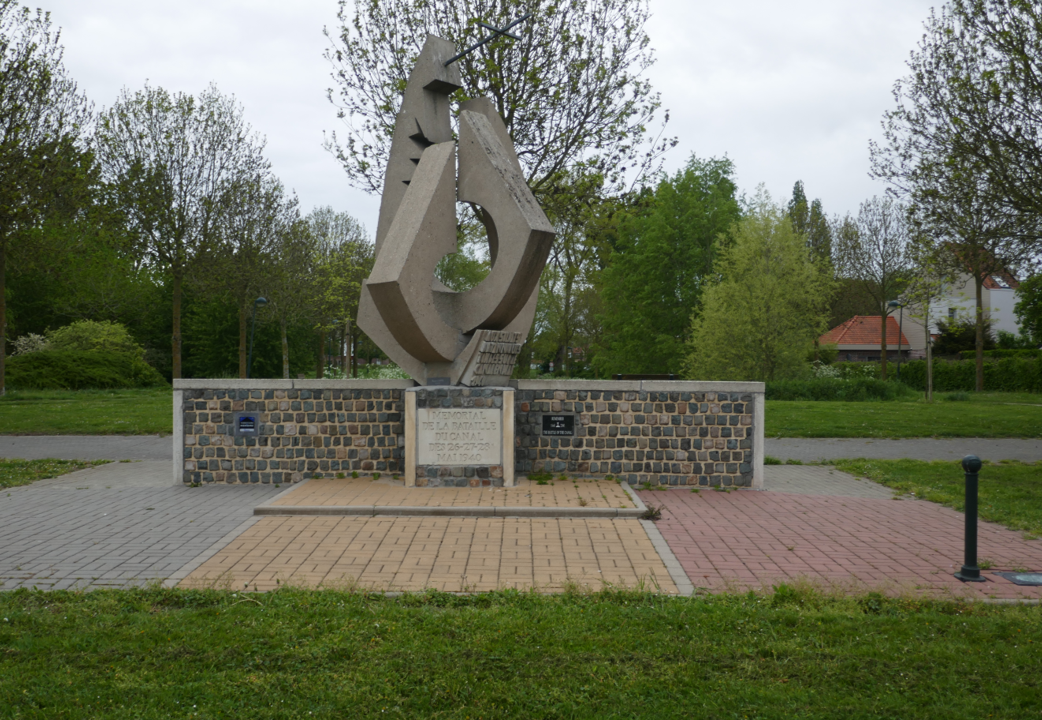 ‘Grand Party’ describes the Battery in action in the Bois L’Enfer off the N365 road between the villages of Messines and Wytschaete (see map below).  Command HQ was established in a small cottage off the Wytschaete Road.  To the right of the Battery was a troop of 25-pounders under the command of Col Tom Hardy.

Both Battery’s were actively firing throughout the day and night of 27th May  and until the evening of 28th May supporting the counter-attack to the canal line by the Inniskillings and Guards.  Telephone cables to the front line were constantly cut by shelling and low-level Luftwaffe attacks.  Gunner Bruckland disappeared while repairing a cable and was later reported as a POW. 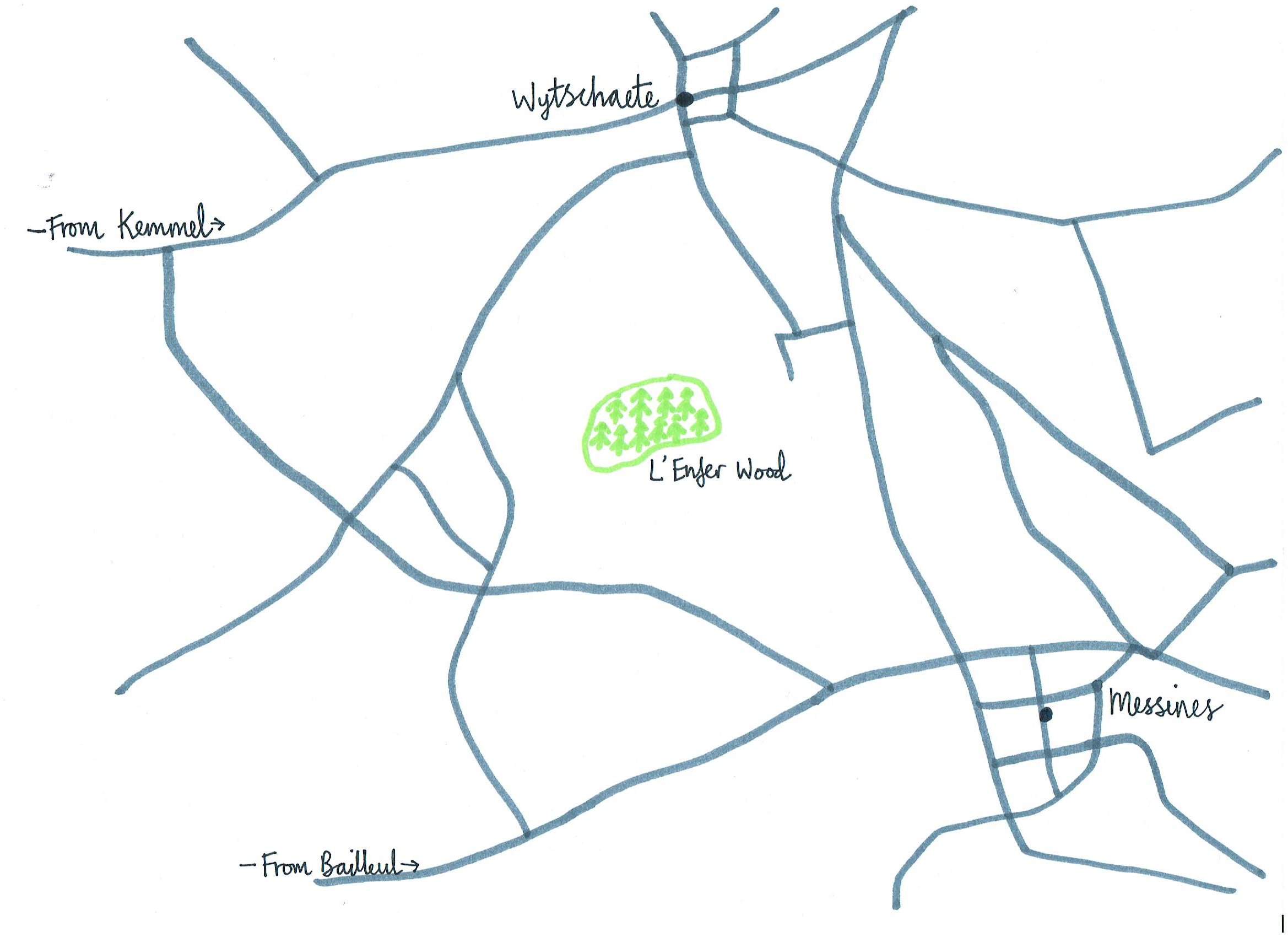 Sketch map showing position of L’Enfer Wood, on Messines ridge between Wytschaete and Messines. Most of the forest has now been replaced by agricultural land. 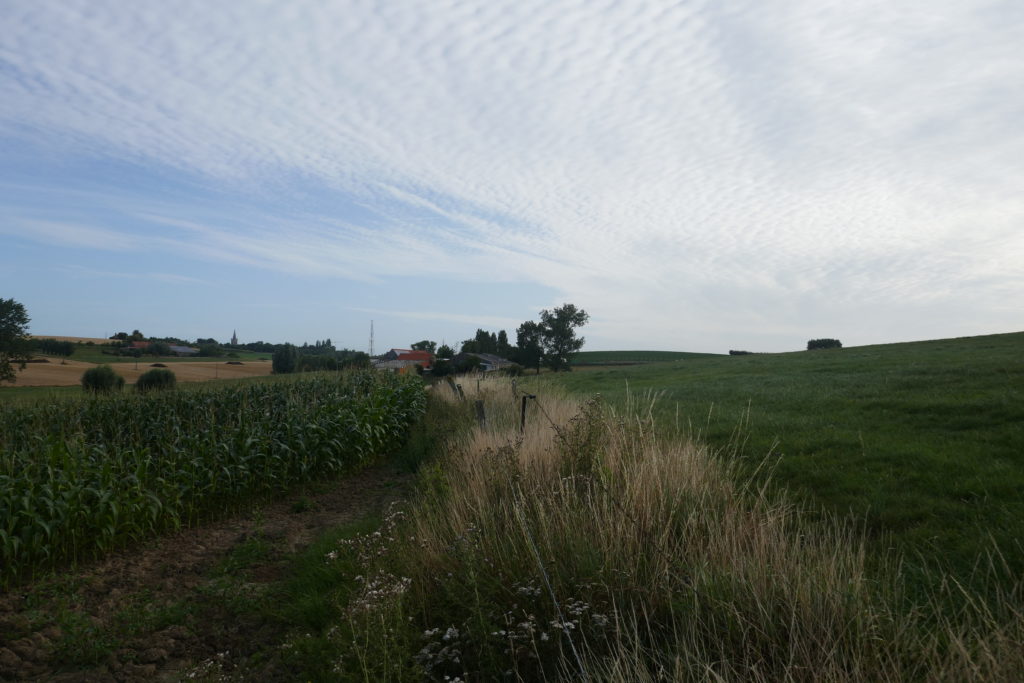 366 Battery’s position in the Bois d’Enfer, Messines.  Looking East towards the threatened German advance (over the horizon). 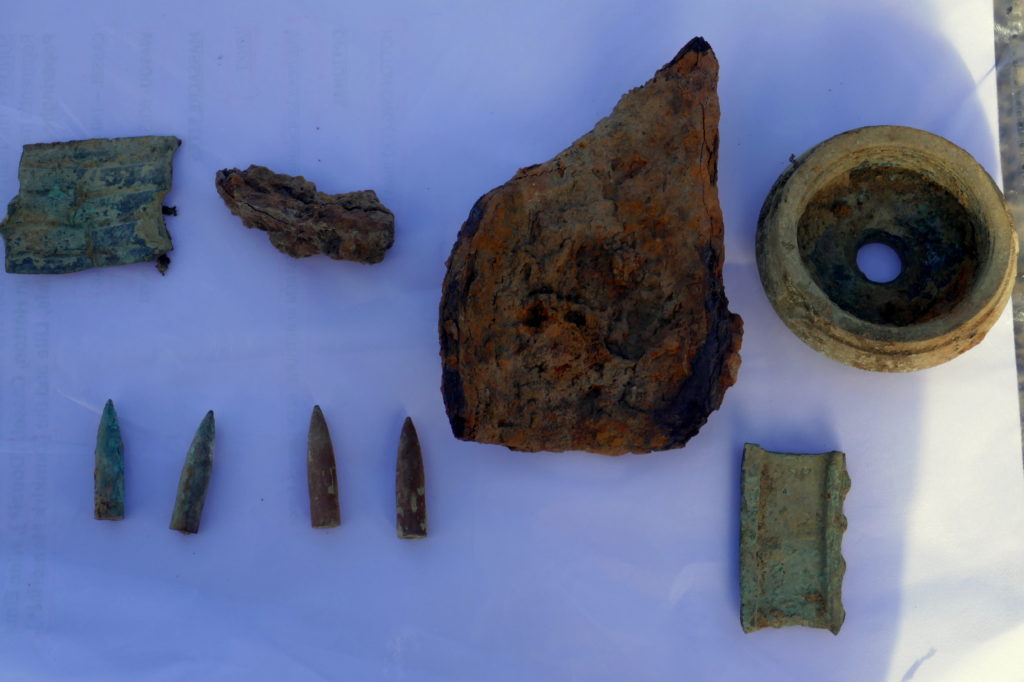 Some of our ‘finds’ at Bois l’Enfer in 2019, including an intact fuse assembly and shell firing rings.

After heroic hand-to-hand fighting, the Germans were driven back to the canal and the line was stabilised.  However, on the evening of 28th May, the British units on Messines received the order to withdraw and head for Dunkirk.  Lt Col Brooks received his order from Brigadier Barry, together with the ‘flabbergasting‘ news about the proposed evacuation of the entire B.E.F.  The Battery were ordered to deplete their ammunition by firing in a gradually reducing pattern and then to destroy the guns and equipment.  All heavy equipment was abandoned and, under the cover of darkness, the men boarded a convoy of their remaining lorries including Lt. Col Brook’s wireless-equipped Humber Snipe.

Thereafter the Battery retreated North towards the Dunkirk beaches, a journey of approximately 30 miles.  The precise route taken by the convoy was described as through the towns of Wytschate–Wulverghem–Dranoutre–Locre–Wesoutre–Reninghelst–Poperinghe–Rousbrugge–Bergues to Dunkirk.  That journey took 10 hours to complete, including a two-hour standstill caused by refugees and fleeing Belgian soldiers at Locre.

Beyond Locre, the narrowness of the B.E.F.’s remaining escape corridor was brought home to the Battery as they could see German flares being fired from both their left and right into the night sky.  The Battery arrived in Poperinghe as daylight was breaking on 29th May and where there was another considerable hold-up.  When they reached the canal line that marked the Dunkirk perimeter, the Battery found many of the bridges had already destroyed and so they had to disable their vehicles there, some were driven into the canal.  Brooks emptied his revolver into the petrol tank.  They then marched the remaining 6 miles to Dunkirk.  Although the men were under continuous air attack and had had little sleep for 24 hours, they remained a cohesive force and morale was preserved.

At the Dunkirk beaches, ‘Grand Party‘ describes scenes consistent with all the other historical accounts.  Interestingly, Lt. Col Brooks starts to describe some of his men by their Christian names at this stage in his book.  A ‘Gunner B’ wanted to leave the beach to go into Dunkirk town (which was ablaze) in search of female company, but was dissuaded.

2nd Lt Robert (‘Boots’) Crighton-Brown demonstrated particular heroism under fire on the beach, ensuring the men stayed together and were embarked on dinghy’s in good order.  ‘Boots’ was later Mentioned in Dispatches and recommended for a Military Cross.

MC Citation– ‘After showing personal courage and regard for his men throughout the operations, this young officer rendered valuable service on the beach at DUNKIRK. When no organisation was available, and no troops had been embarked on his beach throughout the night of 29th May, and enemy planes were bombing at intervals he made contact with the Navy and took the leading part in organising the embarkation of large bodies of men with the only boats available. For 12 hours he stood up to his waist in the sea, controlling the allotment and loading of boats and by his personal example and patience was responsible for the quiet evacuation of mean of all arms.‘

After evacuation, most of the men were disembarked from Royal Navy destroyers at Dover and then taken by train to Kemble, Gloucestershire, close to the town of Dursley from where the Regiment had set out for France three months previously.  It appears that the majority of 366 Battery was successfully evacuated, although precise numbers are not available.  There is an account of 14 officers and nearly 300 men from the Regiment (out of 700) who were able to report for active service in England in June 1940.

Lt. Col Brooks describes how he himself reached the beach near De Panne and spent a long period in the sea awaiting rescue by a small craft and ensuring that his men were in good order.  On his return to England, Brooks developed pleurisy which resulted in his invalidity and retirement from the Army.  Graham Brooks died, aged 51 years, in 1946.

There are 140th Regiment casualties buried in Commonwealth War Cemeteries on this route, including two men buried at Nine Elms Cemetery, near Poperinghe.

Gunner Albert Smith, age 21 and from Dagenham, Essex died on the 29th May and Bombardier William Wills, a married man age 25 from Bexleyheath, Kent died between 28th May and 16th June 1940.