The majority of enlisted men from the Regiment captured during the breakout from Cassel and prior actions were eventually transferred to Stalag VIIIB Lamsdorf in Silesia.  According to the Geneva Convention, men below the rank of Sergeant deemed fit were required to work for ‘non-war work’ and were scattered into various working parties throughout South Eastern Germany and occupied Poland and Czechoslovakia.

My father, Lance Bombardier Eric West, was captured near Watou on 31st May 1940; he was then transferred to Stalag VIB, which was on the Dutch/German border, before being transported to Stalag VIIIB, Lamsdorf  in Silesia. 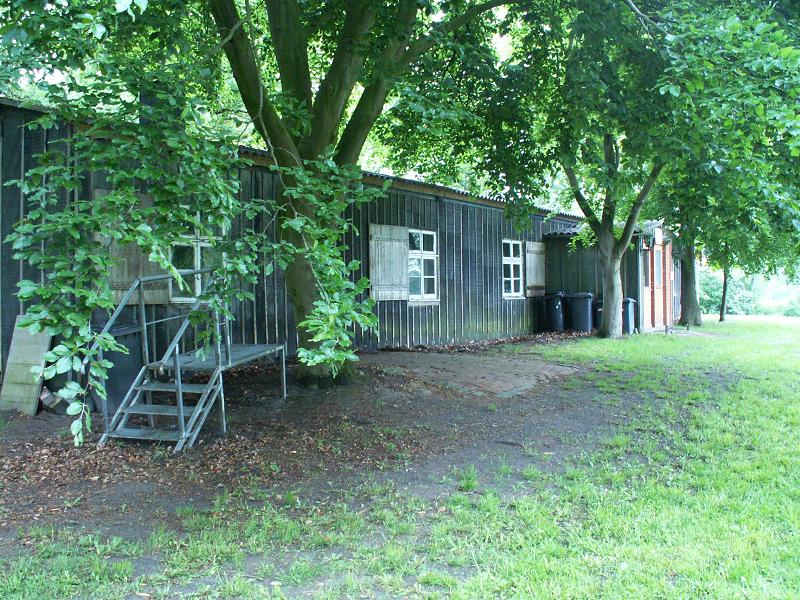 For the majority of his time in captivity he was assigned to the E72 Arbeitskommando (work camp), a coal mine complex in Bytom, Silesia (now Poland).

Gunner Eric Johnson was captured at Watou on 30th May 1940, like my father he was initially taken to Stalag VIB.  Gunner Johnson also spent the rest of the war based at Stalag VIIIB and also some years at the E72 Arbeitskommando work camp alongside my father.

Along with many British soldiers captured at Dunkirk in 1940, my father was transported to Stalag VIIIB, Lamsdorf.   The accounts of this journey suggest it was a combination of long forced marches with little food or water, followed by interminable train journeys across Germany, the whole process taking several weeks.

Lamsdorf was a large complex of POW camps that dated back to the Napoleonic and Great Wars, situated in the modern Polish town of Lambinowice in the far Southeast corner of Silesia about 70 miles east of Krakow.

My Father’s Liberation Questionnaire that was completed on 30th April 1945, suggests he was only held in Stalag VIIIB for a few weeks.  In September 1940 he was transferred to the Bytom industrial complex in Silesia, known as Arbeitskommando E72.  This was a large, industrialised coal mine complex where he spent the remainder of his captivity until the camp was evacuated in January 1945. 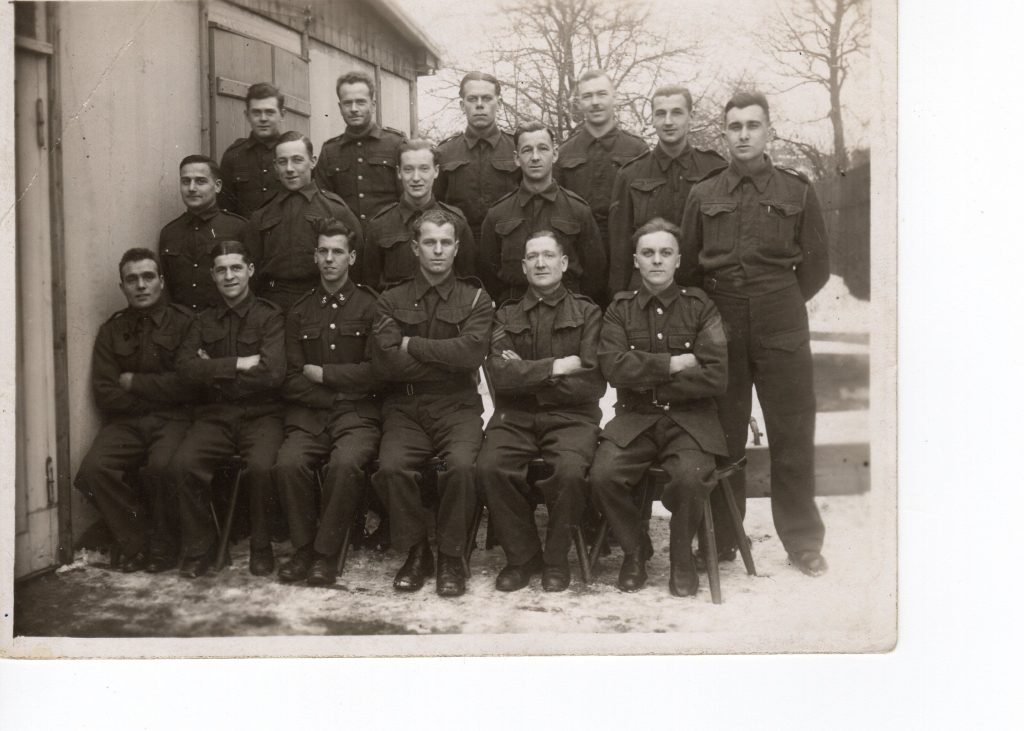 Group photograph at E72 coal mine. Taken in the winter of 1941. My father Eric West is standing first on the right 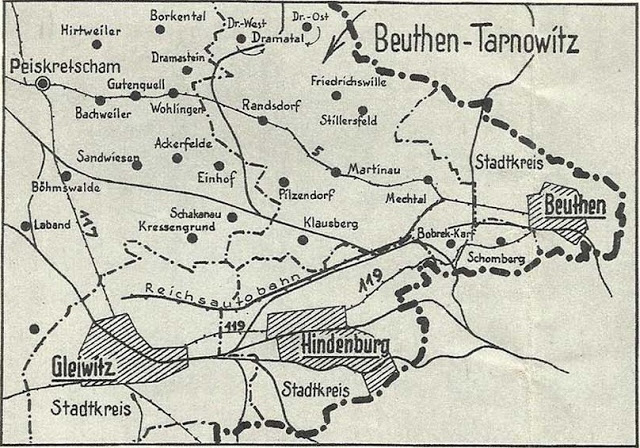 Pre-war map of German Silesia showing construction route of the new Reichs-autobahn linking the Silesian mining towns to Berlin. The E72 camp was between Beuthen and Schomberg. 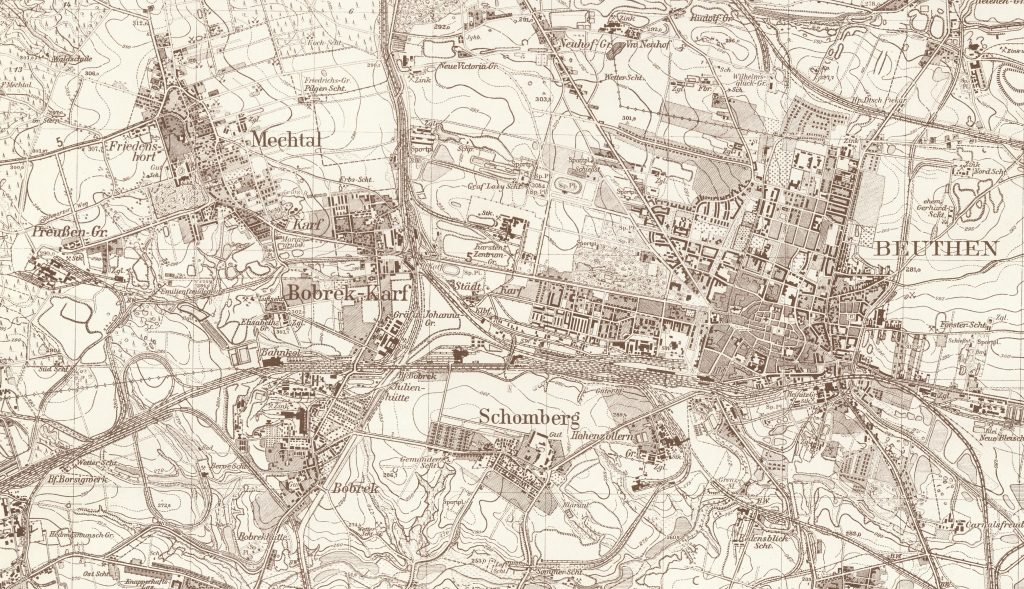 1940’s map of Beuthen, Silesia. The E72 coal mine was situated at the rail head between the village of Schomberg and Beuthen in Silesia.

I have virtually no information about my father’s five years in captivity, although thanks to research by Christine Parry, whose father George Hawkins was also a POW in E72, and the recent publication of Norman Gibbs’ diary, we have been able to piece together some limited information. 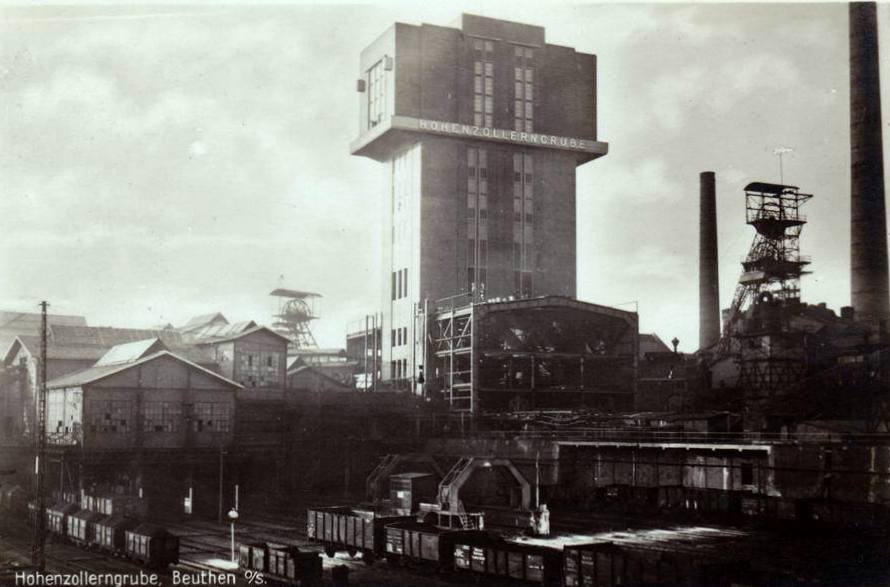 The rail head and iconic winding tower E72 Arbeitskommando, with thanks to Roger Hawkins

E72 was at the Hohenzollern Coalmine in Beuthen, now called Bytom (just north of Katowice) in Poland.  Two other working parties were associated with this mine, E411 was a sawmill providing pit props and E593 was a Palestinian group based nearby in Schomberg (now Szombierki).  The E72 barracks were initially off-site at Schomberg until new huts were constructed on the campus of the mine itself.

The Hohenzollern mine was at the time one of the most modern and efficient coalmines in Europe.   The distinctive brick-built winding gear tower was constructed in 1929 and is the only part of the mine that still survives.

The men worked a 13-day shift, with one Sunday in two off, cleaning their clothes in the shower on the last day.  Private George Hawkins described the work:

‘..The coal face was 3m x 3m and 1m was blasted off by explosives inserted into the face by drilling approx. 1 m holes. On our way to the face we collected clay from stone bins for plugging the explosive holes. Morning and afternoon shifts moved 2m of coal and the night shift extended the rutsche (shaker) by two metres ready for the next day shift. Coal was shovelled onto the shaker and was then fed onto a conveyor belt that ran to fill the empty wagons which overhead cables hauled to the shaft’. 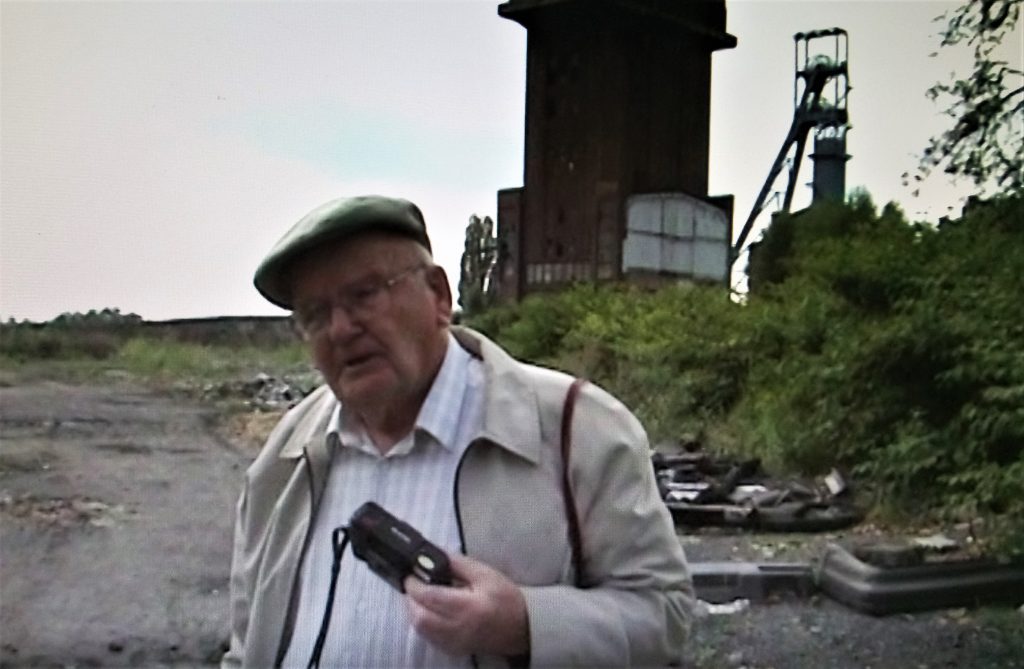 George Hawkins at the site of the E72 mine where he spent his captivity 1940-45. The Hawkins family revisited the Stalag VIIIB and the site of E72 in 2000. With thanks to Chris Parry.

‘There were rats down the mine but no gas. It had electricity throughout and bright lights.  Seams were 18m deep, dug out in three layers, and then filled with sand. They were told never to try and hide in the pit, pumps were working all the time or it would flood within 24hrs.  Miners would always warn ‘vorsichtig’ –take care, and would listen for sounds of collapse. No one died in the mine, or at the camp, only in the hospital.

During the winter the POWs were often pleased to go down the mine out of the cold. They could only play football or swim in nearby gravel pits if off-duty guards would guard them..’

The E72 camp commandant, UnterFeldwebel Arthur Engleskirche, shot at least two prisoners and was wanted for war crimes after the war, but was never found.  After the war the Mine Foreman Gerhard Spaniol, a civilian, was successfully tried for war crimes and convicted to seven years imprisonment in September 1947. His sentence was revoked in December 1951. 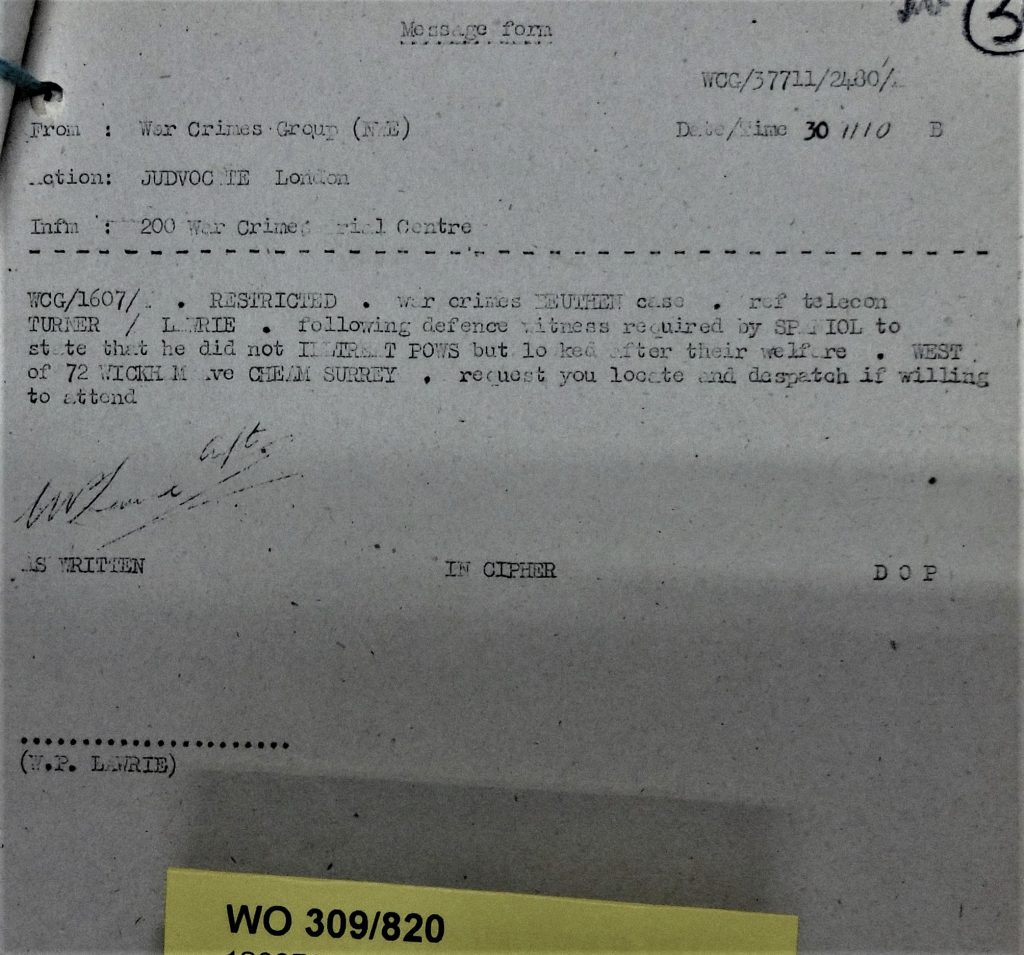 WO309/80 War Crimes BEUTHEN case. Ref. Telecon TURNER/ LAWRIE.  Following defense witness required by SPANIOL to state that he did not mistreat POWS but looked after their welfare. WEST of 72 WICKHAM Ave, CHEAM, SURREY.  Request you locate and dispatch if willing to attend’. W.P LAWRIE.

According to records WO309/820 at the National Archives in Kew, my father was asked to testify at his trial and appeared to state that in his view Herr Spaniol had not mistreated POWs (see Telegram above). We don’t know whether he attended to give this evidence.

Norman Gibbs became the E72 official interpreter and remained in this role from 1940-44.  During those four years, my father became a fluent German speaker (although apart from a year-long spell as an interpreter with the RAOC between 1945-46, he virtually never used this skill post-war).

Norman Gibbs was abruptly removed from E72 in June 1944, and my father Eric West replaced Gibbs as the camp Dolmetscher (interpreter) from 1944 onward, and his work in the role is mentioned in his Liberation Questionnaire.

The E72 camp commandant, Unter-Feldwebel Arthur Engelkircher was known to the inmates as ‘John the Bastard‘.  Engelkircher was a committed Nazi and apparently a notorious sadist.  My father completed a war crime affidavit, in his distinctive handwriting, for MI6 after his liberation describing the death, at Engelkircher’s hands, of 2nd Battalion Guardsman David Blythin on 23rd March 1943. 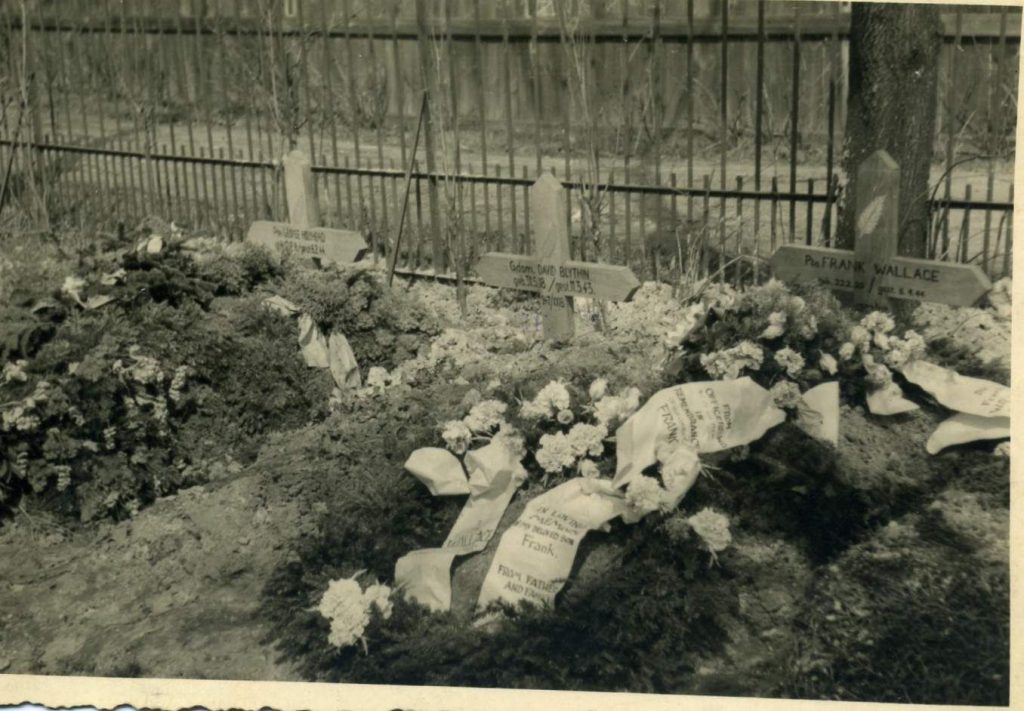 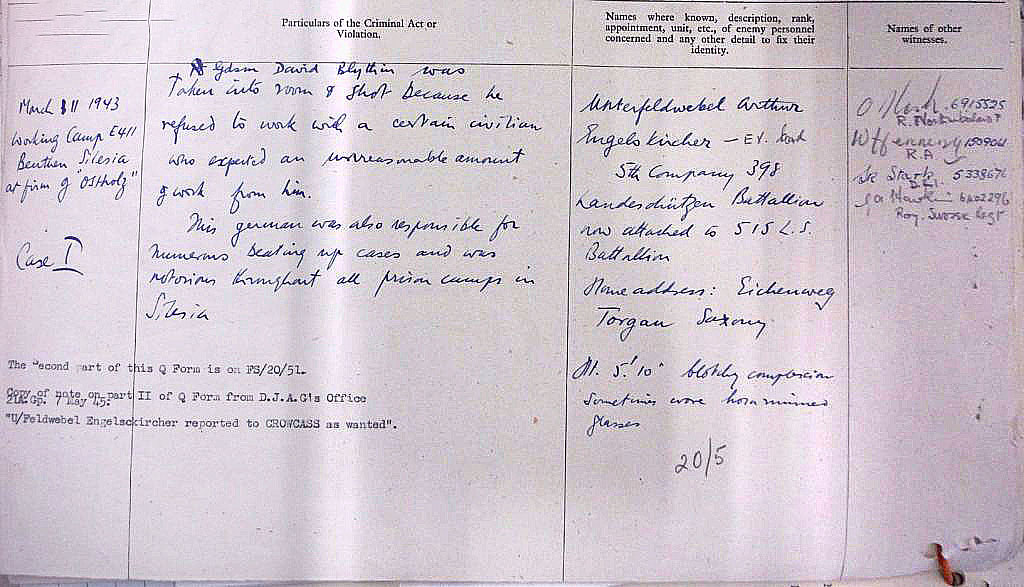 William Leonard Mears was born in 1916 and originated from Plumstead, South-east London.  Sergeant Mears completed a Liberation Questionnaire on 10th May 1945 which documents his capture during the Cassel breakout on 30th May 1940 and transfer to Stalag 8B Lamsdorf, where he arrived in July 1940.

He briefly escaped captivity a few miles North of Cambrai and had ‘set off in a southerly direction with Bombardier Grey’.  They were recaptured in mid-June 1940 by German infantry.  Mears described feeling ‘fit‘ but ‘very hungry‘. 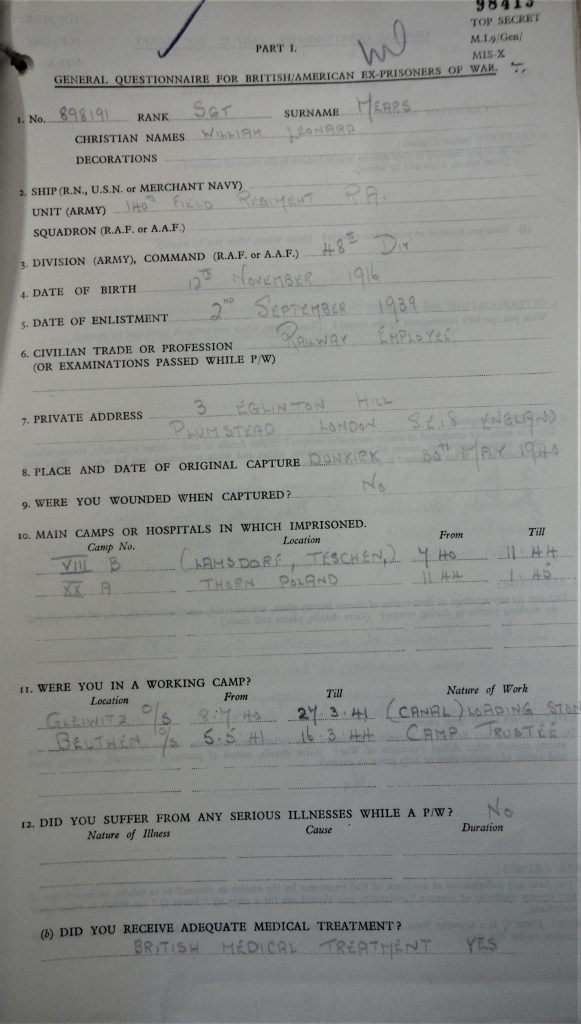 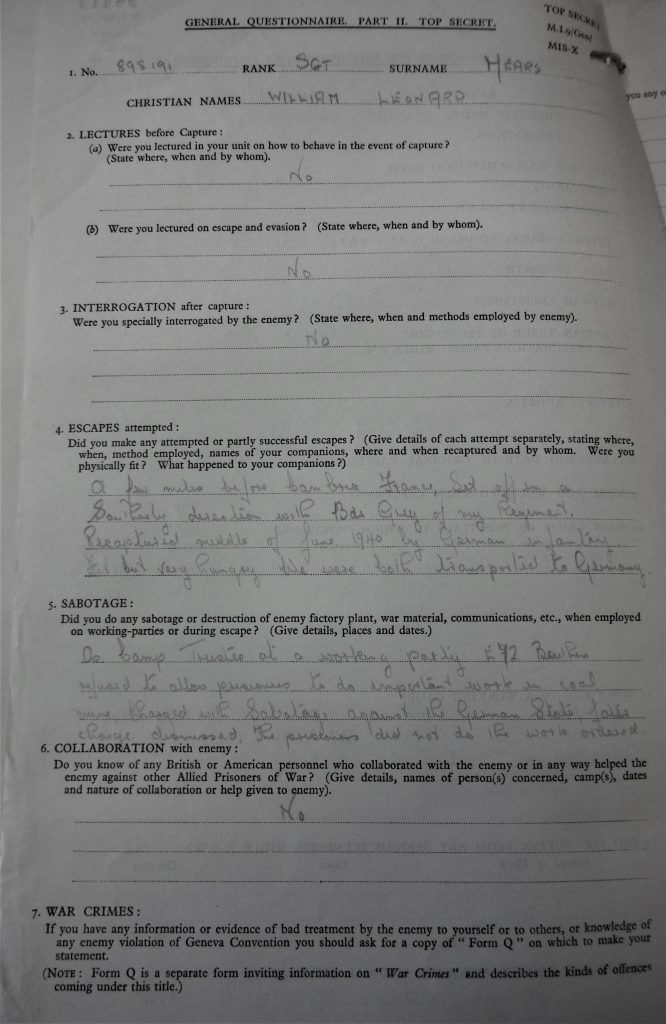 Sergeant Mears was assigned to a working camp loading stones for canal maintenance in Gleiwitz, Poland from 8th July 1940 until 27th March 1941, and was then transferred to ArbeitsKommando E72 at Bytom, where he served as ‘Camp Trustee‘ (Man of Confidence) until 16th March 1944.

After this he was transferred to Stalag XXA Thorn (now Torun).

As the E72 Camp Trustee, Mears refused to allow prisoners to do some aspects of the work.  He was charged with sabotage against the German state. Fortunately for Mears, the charge was dismissed and the prisoners ‘did not do the work ordered’.

As the Red Army advanced Westwards, the men were marched out of the mine on 23rd January 1945.  They were given two days notice to prepare and no-one went to work.  They were told to leave their blankets and collect 3 Red Cross parcels.  They left in the evening and marched all night and all the next day.

We have no real knowledge of my father’s route home although some of the family anecdotes suggest he was on the Long March.  His Liberation Questionnaire mentions an escape attempt on the first day of the march in January 1945 at Gleiwitz [now Gliwice], but that he was re-arrested by German Feldwebel, and presumably remained on the Long March thereafter.

George Hawkins was liberated after he met with the advancing American army on 24th April 1945 in Roding, Bavaria.