Dennis Waddington Clarke was born 1912, the son of the famous journalist Tom Clarke.  He was ‘proud of his Cockney roots‘ and Oxford educated. While at Oxford he joined the Officer cadet force. In 1937 he married Marguerite (Rita) Raepsaet who was of Belgian origin.

In the 1930’s the Daily Express newspaper, owned by Lord Beaverbrook, sold over 4 million copies a day and was highly influential. In 1932 Dennis Clarke joined Express newspapers and became a foreign correspondent.

Clarke was based in Austria and covered the German Anschluss in March 1938 as well the build up to the Czech Sudetenland annexation later that year.  He suffered a narrow escape when a Nazi bullet hit his hat during the pre-Anschluss rioting in Vienna.

He wrote extensively about his first hand experiences of Nazi intimidation and anti-semitism and so, of all the 140 Regiment officers, he would have best understood the roots and background of the conflict. 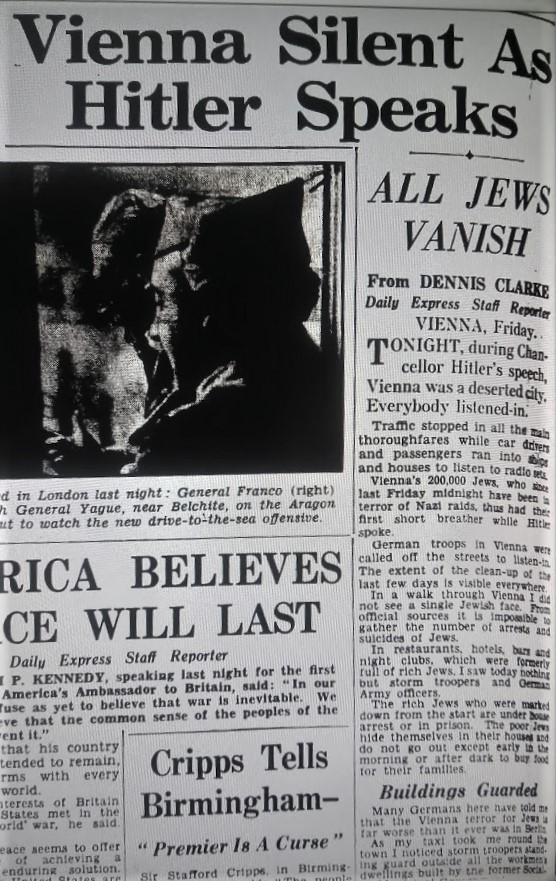 Despite Prime Minister Chamberlain’s declaration on 27th September 1938 that the German invasion of Czechoslovakia was based on ‘a quarrel in a faraway country, between people of whom we know nothing’, in March 1939 Dennis Clarke wrote a sophisticated economic analysis pointing out that the Czechoslovakian invasion had been pivotal in netting the Germans over £60 million worth of gold reserves, as well as the industrial output of the Czech arms factories, at a time when the German economy had been in a highly parlous state.

APART from the glory and the Czech arms factories, Hitler’s most valuable acquisition from Czechoslovakia is the £60,000,000 of gold and foreign exchange in the Czech Treasury. Germany’s gold holdings were down to about £6,000,000.
The Czech gold, injected into the German economic system, will give, it a very necessary reviver.
It will help to finance more of that German foreign trade to whose parlous state Hitler referred when he cried in January “Germany must export or die.”
Germany must export to gain credits abroad which will enable her to import the raw materials she lacks.
The Czech gold is a windfall. Germany’s finances, in fact, may have been chief factor in pushing Germany to annexing her neighbour.

GERMANY is spending £1,150,000,000 yearly on armaments, it is reliably estimated—twice as much as we are. Yet her foreign trade balance for 1933 showed a startling deficit of £37,500,000. That leaves her no margin to pay for the oil, rubber, metals and other materials she has to buy abroad. She has been living on capital ever since the Nazis came into power, borrowing about £500,000,000 internally each year in an attempt to whip up internal production to a pitch where Germany could practically dump goods abroad, as she does, to obtain the precious foreign currency.
The deficit in the balance of trade last year showed that this was not succeeding as well as? it might. Moreover, the substitutes which German ingenuity has found for absent raw materials are proving more expensive than the natural originals.
Although figures are not published it can be taken for granted that the Nazis have never balanced a Budget since they came to power.
They have merely inflated credit by borrowing and initiating colossal public works schemes.

CREDIT inflation is like , cocaine. Once you start you cannot stop. You feel the craving stronger the more you indulge. Since 1935 it is believed Germany has added about £5.500,000,000 to the public debt. Dr. Schacht, having shown the Nazis how to do it for three years, finally called a halt in January. He was disregarded and sacked. Other orthodox financiers were dismissed from the Finance Ministry and Reichsbank and a team of Nazi economists were put in charge headed by Dr. Funk.
Their one economic tenet is this: Increase production and you can inflate and expand ad infinitum. Concession was made to orthodoxy in February when taxes were increased all round, those on bachelors by 12 per cent.
The Jews were raided for £80.000.000. A loan of £125,000,000 was subscribed by the unwilling banks and insurance companies under threat in January. But these were not enough. German note circulation, under Funk’s new policy, jumped to 39 per cent, more than last year as soon as Schacht was out of the way.  Germans I spoke to recently told me they feared a capital levy soon. They may get it yet, despite the Czech’s gold.
The German railways, neglected in favour of the rearmament campaign, had fallen to such a condition that it was doubted if they could bear the strain of another of the mobilisations which precede Nazi foreign political coups.
A four-year plan to reconstruct the railways at a cost of £1.000,000.000 was clapped on to the existing burdens of German finance this year. It was announced last night that £300.000,000 of this will be spent on new carriages. Primary products have done something to wither this Nazi hope.
But Germany, as one of the world’s greatest consumers of primary goods, is in a strong position. Even while Mr. Cordell Hull, U.S. Secretary of State, is denouncing Nazi trade methods, Virginian cotton growers are toying with barter offers from Nazi agents. As Hitler marched into Bohemia his agents were fixing a wheat-for-railway-equipment barter with the Argentine.
Those are her prospects for external trade. Internally, things go on in the same old way. Hitler goes on producing rabbits from an empty hat.
How has he done it till now? When the Nazis came to power at the tail end of the depression in 1933, Germany, an exporting nation, had been hit harder than most. But when trade revived she recovered quicker than most. Hitler, as politicians will, took the credit.
He helped to speed up recovery by a rapid inflation of credit. He handed out State orders like free cakes. Business men who received State orders were allowed to draw bills on the State and use the bills as legal currency. The banks would discount them if the business men wanted to sell them because they bore such high rates of interest
At the same time Hitler inherited £1.000.000.000 worth of idle stocks and raw materials accumulated during the depression. Equipped with the new buying power, men and women bought up these stocks.

Where is it all going ? Can Germany keep it up? Will she go bankrupt?
Not if she can force a large part or the world into her barter economic system as she looked very much like doing at one time. British and American measures to counteract this economic blackmail of small countries producing IX MILLION unemployed were soon caught up in the spinning wheels of reviving industry.
There was nothing unsound in this at the start. But I said it was like cocaine. It went on and on. New tricks were devised for masking the growing indebtedness. Consolidated loans were issued to buy up the alarmingly growing floating debt.
The money went round and around: credit inflation, industrial activity, profits, savings bank deposits, and finally back to the State as loan.
Except that the money was going out faster than it was coming back, it was all right. The fat represented by the £1,000.000,000 accumulated depression stocks has disappeared a long time ago now.
But the merry-go-round still continues at a faster and faster speed.’

Through his connection to the Daily Express barrister Major Graham Brooks, Clarke joined the 140th Field Regiment in July 1939 at the age of 27 years.  He served as 2nd Lieutenant under Brooks’ command in 366 Battery.  While in action in the BEF in 1940, Clarke was rapidly promoted to the rank of Captain. 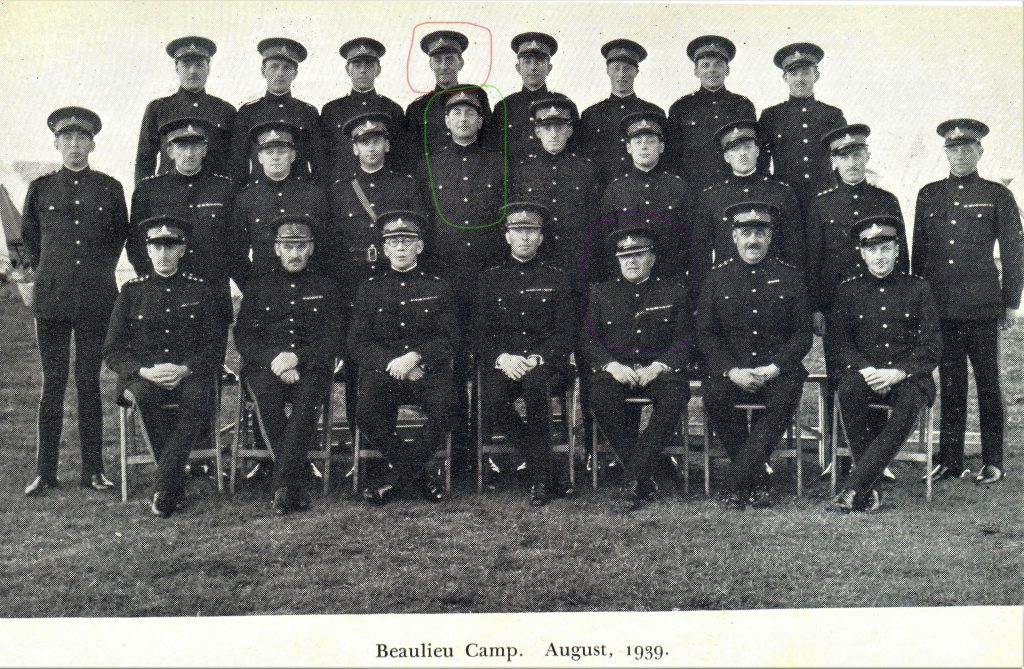 After Dunkirk, Clarke was promoted to Major. In December 1941, during Brooks’ illness, he assumed temporary command of 140th Regiment while it was based in Bournemouth. 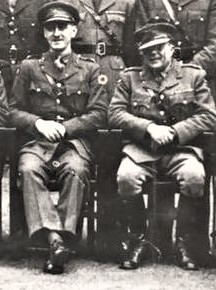 Major Clarke was posted to North Africa and on 8th March 1943 he was seriously wounded alongside fellow 140th Regiment officer Basil Strachan.  His injury resulted in the loss of an arm.

Dennis Clarke returned to his pre-war career as a journalist at the Daily Express, and was now based in London. He suffered ill-health which was presumably related to his 1943 injury.  However, he assisted in the direction of documentary films, and in 1950 was Liberal candidate for Carshalton at the general election. Clarke was in a three-party contest. He came third polling 9%, losing his deposit. In 1951 Carshalton had no Liberal candidate and Clarke did not stand for parliament again.

Major Dennis Clarke died in Westminster on the 13th June 1955 at the age of 43 years.