From May 24th 1940, Brigadier Nigel Somerset commanded 145 Brigade (‘Somerforce‘) at Cassel, and after the withdrawal from Cassel of the Royal Horse Artillery on 29th May,  Major Christopherson of 367 Battery/ 140th Field Regiment acted as his C.R.A. (Commanding Royal Artillery).

Nigel Somerset was born in 1893 and trained at Sandhurst.  He served in the Great War with the 1st Battalion, Gloucestershire Regiment as a 2nd Lieutenant at the age of 17 years. He was wounded at the Battle of the Aisne in September 1914 and returned to the Western front in December 1914.  He was wounded for a second time at Cuinchy in May 1915.  Subsequently, after convalescence, in October 1916 Somerset was posted to Iraq where he commanded the 14th Light Armoured Motor Battery.

Ironically the village of Cuinchy is only 25 miles to the South of Cassel, meaning that Somerset would have been familiar with the military landscape to which he was to return 25 years later in 1940, this time commanding the 2nd Battalion, Gloucester Regiment.

After cessation of hostilities Somerset continued his military career and served in the Afghan War in 1919; he was promoted to Brevet Major in 1921.  He was appointed Aide-de-Camp to the Governor of South Australia in 1920-22 and then became Assistant Military Secretary at HQ Southern Command, India from 1926-30.  He was promoted to Lieutenant Colonel in 1938 and appointed Commander of the 2nd Battalion, Gloucestershire Regiment. 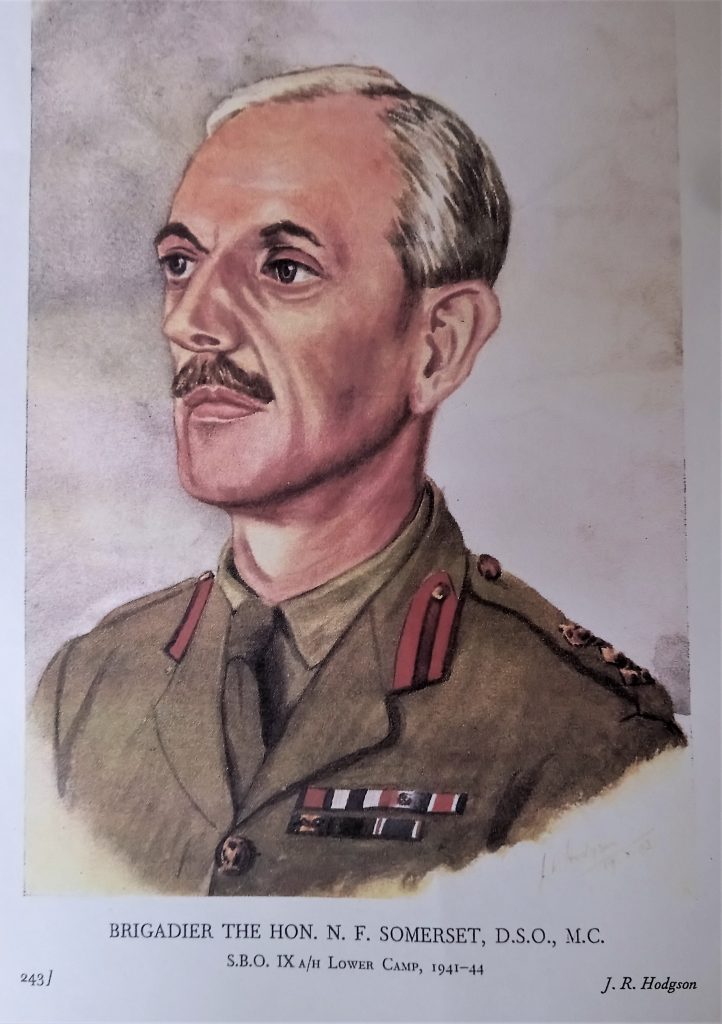 Sketch of Nigel Somerset by J.R. Hodgson, taken in Oflag IX. With thanks to Henry Somerset

Lieutenant Colonel Somerset’s Regiment joined the BEF in France in 1940 and his Battalion was in action at the Dyle line after the German invasion of 10th May.  On the 15th May 1940, at the age of 46 years, Somerset was summoned to a meeting and appointed Commander of 145 Brigade with immediate effect.  145 Brigade’s initial remit was to relieve some French Moroccan Troops under pressure on the Dyle and to protect the B.E.F. from positions facing South.

As the B.E.F.’s position deteriorated, the 145 Brigade withdrew to Waterloo and, from there, to Tournai.  After heavy fighting on the Escaut line, on the 23rd May 1940, 145 Brigade was ordered to withdraw to Nomain, a town approximately 18 miles to the South-east of Lille.

At 07.00 hrs on 24th May 1940, the Brigade was ordered to proceed from Nomain to Calais as ‘Somerset Col‘.  Calais was by then under siege.  While preparing for this move, new orders were received at 15.00 hrs stating that a force had been dispatched from England to defend Calais and that 145 Brigade, now called ‘Somerforce’ should instead divert to Cassel.

At Cassel, Somerset found himself in command of an ad hoc mixture of Regiments including the Gloucesters that had fought previously under his command, the Ox & Bucks Light Infantry and 367 Battery of the 140th Field Regiment.  His task, never explicitly set out by Lord Gort’s HQ,  was to protect at all costs the B.E.F’s Western escape corridor to Dunkirk along a 20 mile front centered on Cassel.

Cassel was successfully held against overwhelming odds until the night of 29th May.  Brigadier Somerset took part in the Breakout from Cassel and was captured near Watou on 30th May 1940.  He remained a POW in various camps until liberation by American forces in March 1945.

As Commanding Officer, Somerset kept an official war diary and in addition he wrote another, more detailed account, of events between 14th and 30th May 1940 while in a POW camp shortly after his capture.  This account had been sent to Berlin and then fell into the hands of the Russians at the end of the war.  It was eventually handed to Prime Minister Tony Blair on a visit to Moscow in 1997.  It now resides in ‘The Soldiers of Gloucestershire‘ museum in Gloucester.

In 1948, Brigadier Somerset wrote to the Daily Telegraph newspaper berating the lack of recognition for his men’s bravery in their rearguard action at Dunkirk. That letter is reproduced in this site ‘In Dunkirk’s Grim Days‘.

In addition, Somerset wrote a forward to the book ‘Underground from Posen‘ by Lt Col. Michael Duncan, which includes an account of the fighting at Cassel, and in 1981, Somerset authored an unpublished manuscript entitled ‘In the Bag’, which is his personal recollection of capture alongside his doomed 145 Brigade and the five years he spent as a POW.

The final paragraph of ‘In the Bag‘ reads:

‘Here my story ends and I began to start a new life- thankful to be alive.  In this account I have purposely omitted the names of any officers…… it is all a long time ago and I fear some are no longer with us’

Brigadier Somerset’s CBE citation. It reads. ‘A most outstanding leader and fighter. Full of determination and imagination and at all time imbued with the spirit of aggressive defence. As Commander of the right flank of the BEF for practically the whole of the retreat he inspired his brigade to offer the most stubborn resistance throughout and his achievements culminated in the brilliant defence of CASSEL which held up all enemy attacks of AFVs [Armoured Fighting Vehicles] for over four days’

Brigadier the Hon Nigel Somerset CBE, DSO, MC died on 6th February 1990 at the age of 96 years and is buried, alongside his wife Phyllis Marion Somerset who predeceased him, at Uckfield Cemetery, Sussex.