Eric Johnson was born on the 11th October 1920 and was one of 140th Regiment’s early recruits.  At the age of 19 years he joined the Woolwich section of 140th Field Regiment, 367 Battery.  It sounds as if he joined up almost on a whim, as he casually announced it to his family after his return from work.  His son, Richard Johnson, and I  have met to discuss the very scant details we have of both our fathers’ wartime experiences. 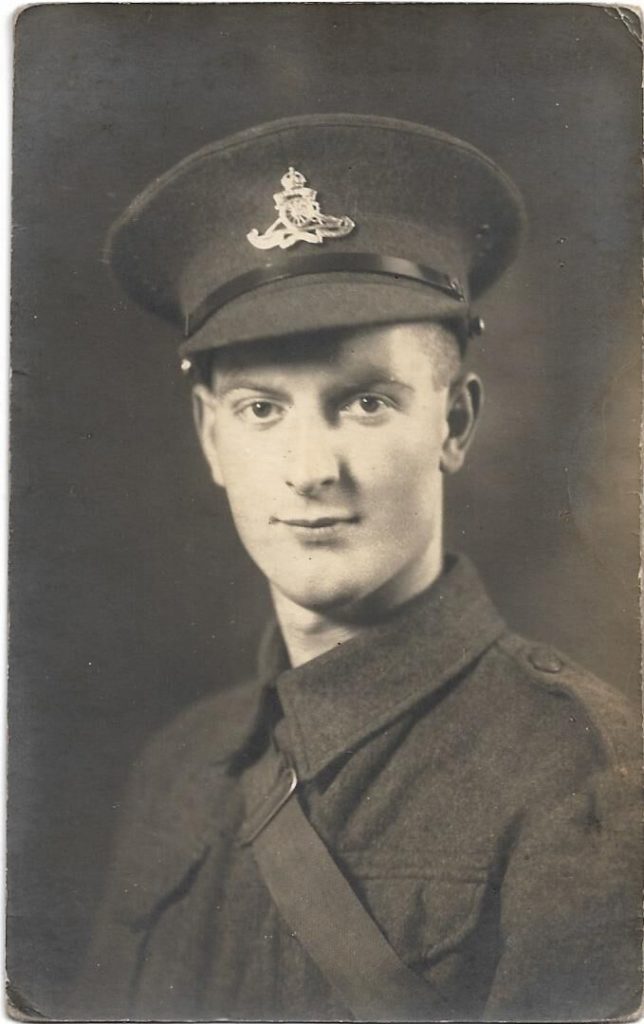 Gunner Johnson’s military records confirm his involvement with all 367 Battery’s battles, including the battle of Cassel and the breakout towards Dunkirk on 29th May 1940.  His Liberation questionnaire confirmed his capture in Watou (mis-spelled as ‘Watteau‘) on 30th May 1940.  We don’t know whether he may have been captured with the column of Artillerymen that was being led by Major Ronald Cartland MP.

After his capture Gunner Johnson was transported across Belgium and, like my father, Eric West was temporarily interned at Stalag VIB on the German/Dutch border before travelling through Germany to Stalag VIIIB, Lamsdorf.  For part of his captivity, was sent to the E72 Arbeitskommando amongst various other work parties that included E543 Drmbrowa, E346 Lenschutz and E725 Konigshutte Bismark.

It is known that Eric Johnson participated in the Long March across Czechoslovakia and Southern Germany and was liberated by American forces in March 1945, weighing less than 7 stones with his 6′ 1” frame.

On his return to the UK he was posted to 203 Field Regiment Royal Artillery; the same Regiment as my father Eric West.

‘…My father was a gunner in the Royal Artillery 140/367 Regiment.  I remember him telling me that he was in the Territorial Army before the start of the war and when he was called up he told his mother that he was going down to the recruiting office to sign up and he would be back for tea in an hour, but he didn’t come back for six weeks as he had been sent off for basic training to Devon.

Dad was part of the British Expeditionary Force and arrived in France in April 1940.

He was deployed around the Cassel /Hazebrouck area to stop the German advance  and ultimately in defence of the Dunkirk evacuation. From his Army record I found out he had been wounded, but I don’t know when or where.

He was captured on 30th May 1940 at Watou, Belgium and then spent five years as a prisoner of war at Stalag VIIIB, mainly in associated work parties .

He said that they walked all the way to the first camp [Stalag VIB] and when he asked the guards how far it was to the camp he was told “just over the next hill”, a phrase he used to say to me as a child whenever we went anywhere.

My grandparents were told he was missing, presumed dead, after his capture and they received letters from friends saying how sorry they were to have heard this sad news.

It wasn’t until he started getting Red Cross parcels in the camp that he was able to get news back that he was alive.  My grandparents received a telegram in late 1940  confirming his location so they were then able to send parcels and letters to him.  He never spoke about his time in the camps but he did say a couple of things about his time at Stalag VIIIB

1) He hid a radio they used to listen to the BBC on under the floor of his hut and he cut the floorboards with a razor blade.

E543 Drmbrowa.  I have a record of a card sent to dad from his mother.

E72 Beuthen (Bytom). Hohenzollern coal mine (from the register for recovered Allied POW).

E725 Konigshutte Bismark.  (from the register for recovered Allied POW).

I also know he was on the Long March starting in January 1945. He only spoke once about the walk saying that his friend Bernard Clarke, who accompanied him on the walk, traded his watch for half a loaf of bread as they were starving.

It was via Bernard that dad met my mother.

I believe he walked a route starting in Katowice via:  Raciborz–Nysa–Brzeg–Hradec Kralove–Kolin–Landshut–Munich–back to Landshut–Rogensburg [where he was liberated by Allied forces]–Reims [the last section to Reims was probably by train]….’