Leonard Stringer was born in September 1918, the youngest son of  Frank and Kate Stringer of Letchworth, Hertfordshire.  He enlisted into the Territorial Army under the terms of the National Service (Armed Forces) Act 1939 and was posted to HQ/135 (North Herts) Field Regiment, Royal Artillery, based at Peterborough.

Before going to war, Leonard Stringer was engaged to Rose, who lived in Stevenage, Hertfordshire. 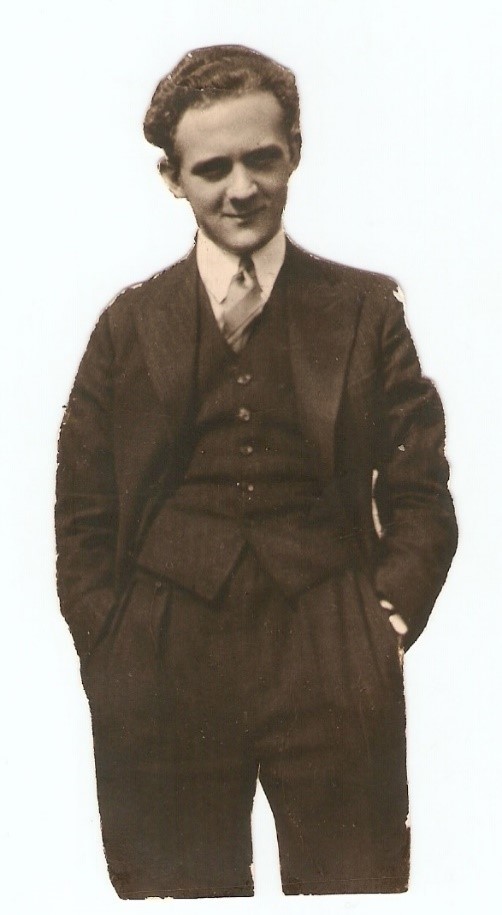 Stringer was a mechanic pre-war and qualified as a Technical Fitter on 9th March 1940, working on Artillery tractors.  On 11th March he was posted to join the B.E.F. in France.  He travelled to the Royal Artillery Depot at Woolwich, arriving on 16th March, and from there to France on 23rd March.  On 1st April 1940, at the age of 21 years, he joined 367 Battery of the 140th Field Regiment as a Gunner.

Gunner Stringer took part in the Battle of Cassel and the breakout on the 30th May 1940.  According to his family’s history Stringer ‘was hiding in a ditch with other soldiers when a tank opened fire at them killing somebody near him, at that point he surrendered and was taken prisoner’.  We don’t know whether he may have been with Major Cartland’s column in Watou at this time.

Gunner Stringer was listed as Missing on the 20th July 1940.  A second Report dated 4th October 1940 changed his status from Missing to Prisoner of War. During this period he would have been moved from France to Stalag XIIA at Hadamar near Limburgh.  This camp was in effect a poorly equipped transit camp where prisoners were interrogated and documented.

On 21st June 1940 Gunner Stringer was transferred to Stalag VIIIB at Lamsdorf where he remained for just over three years.  In common with the experience of many other prisoners, at some time during his captivity at Lamsdorf, Stringer’s fiance Rose wrote him a “Dear John” letter breaking off their engagement.

During November 1943 an administrative re-organisation of the POW camps took place.  As a result, a large number of POWs, including Stringer, were transferred from Lamsdorf to Stalag VIIID (Teschen) on the German/Czechoslovakian border. This camp mainly held POWs who worked in the coal mines of Upper Silesia.

Gunner Stringer suffered from malnutrition.  Together with his forced labour in a coal mine this resulted in him contracting Silicosis. Also, during his captivity Leonard was hit very hard by a guard with a rifle butt. The combined effects of these made Leonard Stringer become very ill, developing into tuberculosis.

After examination by a German medical board he was recommended for early repatriation. As a result he was returned home via neutral Sweden, arriving in England on 1st February 1945.  After completing formalities Leonard Stringer was escorted to his father’s home by an RAMC orderly.

Gunner Stringer was soon admitted to Three Counties Emergency Hospital, Arlesey, Bedfordshire, together with his German Medical notes, for further assessment and treatment. His condition was confirmed as Pulmonary T.B.

Leonard was formally discharged from the Royal Artillery on 5th June 1945 as “permanently unfit for any form of Military Service”.  His health continued to deteriorate and he was admitted to Hill End Hospital, St Albans where he died on 18th April 1946 at the age of  27 years.

Leonard Stringer is buried with his parents at All Saints Church, Willian, Hertfordshire.