Robert Crichton-Brown was born in Melbourne, Australia on August 23rd 1919 and educated at Sydney Grammar School.  After leaving school, Crichton-Brown joined his father at the Lumley insurance group.

In 1937, Crichton-Brown travelled to London to work as a trainee broker with Lloyd’s, where it seems likely that he met Major Christopherson. With war looming in Europe, he joined the Honourable Artillery Company and, when war was eventually declared, he was commissioned as a junior officer in 366 Battery, 140th Field Regiment. 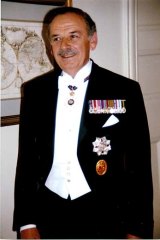 2nd Lt. Crichton-Brown was a short man with a solid build, and had a reputation for leading his men from the front.  Prior to the German invasion of Belgium, he was immaculately turned out in pre-war service uniform which included grey breeches and highly polished riding boots, which earned him the nickname ‘Boots’. This name pervades Graham Brook’s ‘Grand Party’.

On the beaches of Dunkirk he was promoted to Captain, two months short of his 21st birthday.  He returned to England aboard a Dutch fishing trawler, and was mentioned in dispatches for his bravery in ensuring his men were safely embarked before leaving the beach himself (see ‘366 Battery’s Journey to Dunkirk via Messines’).

Post-Dunkirk, Crichton-Brown remained under Brooks’ command as an officer in 366 Battery, and then transferred with the reformed Battery to Iceland.  In January 1941, he married Norah Turnbull and by war’s end they had a son and daughter.

He subsequently transferred with the Regiment to India and Burma where he served as a Major until the end of the war.  The War diary documents Major Crichton-Brown, by now officer commanding 494 Battery, injured in action South of Manlu 12th November 1944.

When he was released from the army, Major Crichton-Brown planned to settle with his wife and children in London but a plea from his father, saying such a move would ”break his mother’s heart” meant he returned to Australia.

Returning to Sydney in 1947, he threw himself into business and was soon recognised for his drive and leadership.  As well as his business activities, he held a number of honorary positions with community organisations such as the Salvation Army, the Duke of Edinburgh Award scheme, the Scouts and Girl Guides and various hospitals and medical research organisations.

Sailing became an increasing passion and he owned and skippered a series of yachts called ‘Balandra‘ (Spanish for sloop), becoming a regular starter in the annual Sydney-to-Hobart race. When Australia decided to challenge for the Admiral’s Cup in Cowes in 1967, Crichton-Brown’s latest 46-foot Balandra made the three-boat team, and went on to win what was then regarded as the ocean-racing championship of the world. 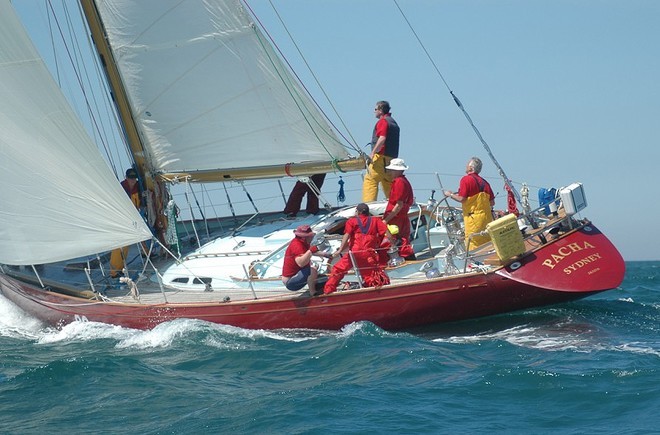 While in Europe, Crichton-Brown saw the almost-new 55-foot aluminium sloop Pacha which had been built, with no expense spared, by French industrialist Francis Bouygues.  He bought the sloop, had it shipped to Australia and used it to win the 1970 Sydney-Hobart race. Pacha enjoyed a permanent mooring off the secluded Store beach in Sydney harbour, where the Crichton-Browns could enjoy long Sunday lunches.

Robert Crichton-Brown was appointed CBE in 1970.  He was knighted in 1972 and made KCMG in 1980.  He was a ‘fearsome’ smoker, never seen without a cigarette in his hand, and so in 1981 Sir Robert was perfectly placed to become Chairman of Rothmans (Australia) Ltd.

In 1985, Sir Robert was asked to take over the helm of the struggling parent Rothmans International in London.  He returned it to profitability and took early retirement in 1988.

Continuing to live in London, he served on several Australian and UK boards, including NAB, the Daily Mail & General Trust and Edwards Dunlop & Co Group. He was also appointed an Honorary Fellow of the University of Sydney and Honorary Life Governor of the Australian Postgraduate Federation in Medicine.

Sir Robert and his wife kept a flat in London but he spent much of his time, even in the weeks before his death, aboard his latest Balandra, a 22-metre luxury yacht.

Major Sir Robert Crichton-Brown RA, died at the age of 93 years in 2013.  He is survived by a son and daughter and seven grandchildren.