Edward Alfred Milton was born on 14th June 1893 in Forest Gate, East London. He lived with his father and grandmother and was one of three children.

He joined the Royal Artillery in the Great War as a 2nd Lieutenant at the age of 21 years and was promoted to Lieutenant during that conflict. In 1916 he married Ivy Florence Courtney and in 1920 they had a daughter, Stella Frances.

In the inter-war years the Milton family moved to Romford, Essex and he worked as a school teacher. Edward Milton was registered with the Romford branch of the National Union of Teachers in 1920.

At the outbreak of the 2nd World War, Milton joined the new 140th Field Regiment at the Woolwich barracks as a Major at the age of 46 years and became Officer commanding 367 Battery.

Major Milton’s 367 Battery was in action at Cassel, and on 30th May 1940 Milton was captured and seriously wounded during the breakout from Cassel, along with his driver, William Martin.

Major Milton was taken by his German captors to the field hospital at St Omer, where he died from his injuries the following day, 31st May 1940. At that hospital, although too ill to be aware, he would have been alongside his fellow 140th Regiment officers Lt. Colonel Odling and Major Christopherson.

Major Milton and Driver Martin’s story is told in more detail in the ‘Breakout‘ and ‘Ones Who got Away‘ sections of this website.  Driver Martin was later to escape from captivity and subsequently took part in the D-Day landings in 1944; he was killed on Sword Beach.

Major Edward Milton TD died at the age of 47 years and is buried in the Longueness Souvenir Commonwealth War Cemetery, St Omer.  His grave carries the inscription ‘So, clothed about with perfect love, the eternal end shall find us one. Ivy’ 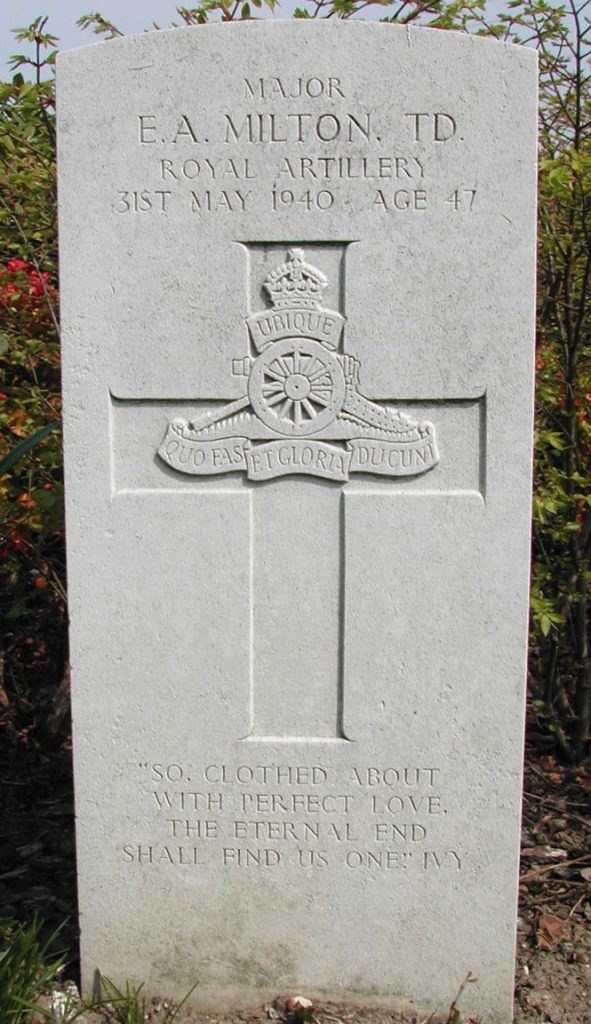