Alfred (‘Alf’) Sheppard was born on 28th May 1915 in Greenwich, London.  In 1932, at the age of 16 years, he joined the Territorial Army and initially served in 366 Battery of the 92nd (5th London) Field Regiment, Royal Artillery.  He had followed in the footsteps of his father, who had been a driver in the Royal Artillery in the First World War.

The 92nd Field Regiment, which was the precursor to the 140th Field Regiment and would have been horse-drawn at that time- his artillery uniform (jodhpurs and puttees, based on the Great War uniform) would have reflected this. 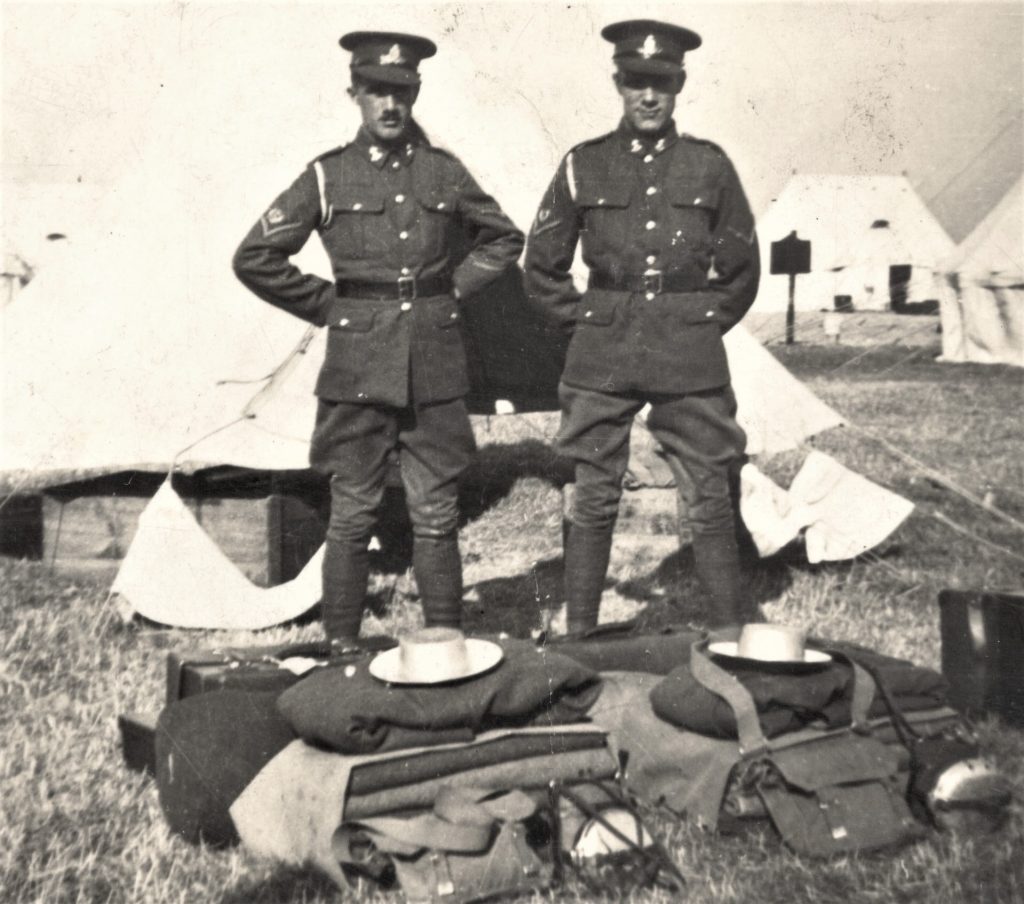 Sergeant (by 1939 he had been promoted) Sheppard would have been one of the first recruits into the newly formed 366 Battery, 140th Regiment. Early in his service in the new Regiment, Sheppard was awarded a cup inscribed “First Gun Layer, 366 Battery”. 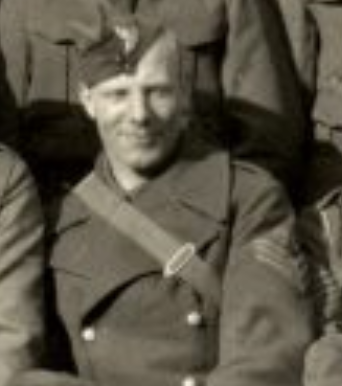 Although the early 1940 photograph confirmed Sergeant Sheppard as a Sergeant in ‘C’ Troop of 366 Battery at Dursley, Sheppard’s recollection to his family is that after joining the BEF in France, he was transferred to 367 Battery.  There are records of other inter-battery exchanges at the time, and as an experienced pre-war Sergeant, it is likely that he was posted to 367 Battery after 366 Battery had been depleted by the shelling incident at Ere on 21st May 1940.

Thus, Sergeant Sheppard served with 367 Battery in the action at Cassel and would have had his 25th birthday during that battle.

Sheppard apparently retained a life-long resentment at having ‘drawn the short-straw’ in the defence of the BEF’s escape route to Dunkirk, and in the process losing so many of his comrades. Although he later told his family  ‘we were never meant to escape’, in fact Sheppard was one of the tiny number of 367 Battery members who served at Cassel to successfully evade capture by the Germans.

Having evaded capture near Watou, and as he approached the Dunkirk beaches, Sergeant Sheppard hid in the basement of a house with two other soldiers. They remained hidden there for three days, then under cover of darkness, the three soldiers dodged German patrols and crept to the beach carrying a one-person collapsible canoe that they’d found in the basement.  They paddled into the English Channel, days after the Dunkirk evacuation was over, and were picked up by a fishing boat.

Although it is known that at least one party of 366 Battery was similarly separated from the main Regiment during the Dunkirk evacuation and eventually paddled off Bray Dunes several days later in a collapsible ‘Goatley’ boat (see Sgt Frank Felstead in ‘Introduction’), the circumstances of Sheppard’s escape differ and the list of Sergeant Felstead’s companions does not include Alf Sheppard.

Just over a month after Dunkirk, on 15th July 1940, Sgt. Sheppard married Joan Dugdell, from Dore, Sheffield while he was serving with the 140th Regiment, which at that time was temporarily under Northern Command in Worksop, Nottinghamshire. Their daughter was born in 1941 in Bournemouth– to where the regiment had moved. 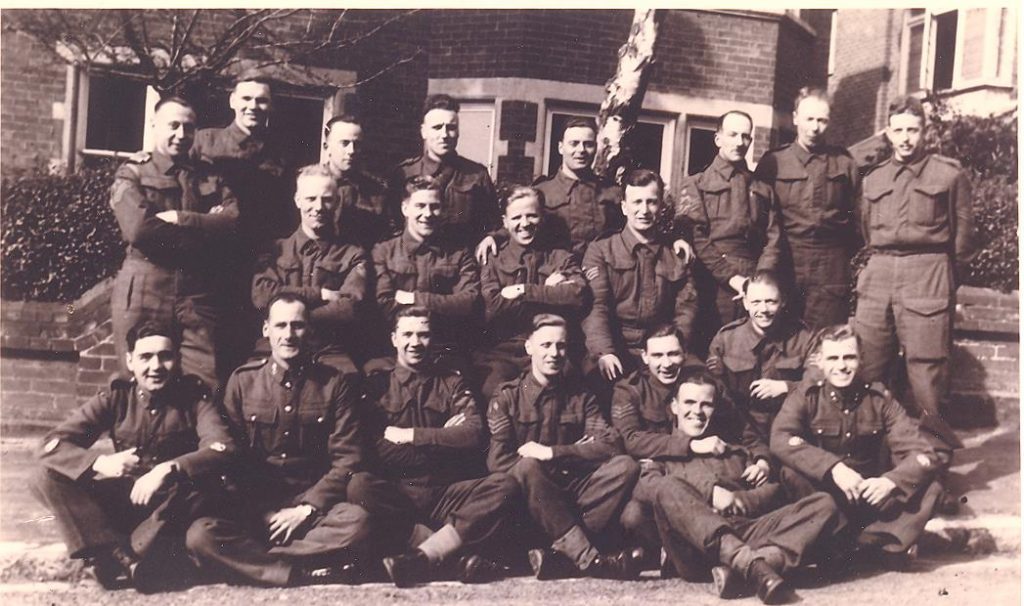 Sheppard joined other Dunkirk survivors in building up the new 504 Battery, re-equipping with the 25-pounder gun.  They sailed from Greenock to Algiers in January 1943, and went into action under 2 AGRA at the Bou Arada/Medjez-el-Bab line in Tunisa.

In September 1943, 504 Battery was merged to form the 75th (Highland) Heavy Regiment, converting to the heavy role by re-equipping with the BL 7.2-inch Howitzer gun, towed by the Mack 7.5 ton 6×6 tractor.

75th Heavy was not assigned to a specific division, but as part of 6th Army Group Royal Artillery (AGRA), were assigned to support different units of the 8th Army as required during the advance north through Italy.

300 Battery also used the BL 7.2 inch gun, however 299 and 453 Battery’s used the American 155 mm ‘Long Tom’ gun, which gave the Regiment a diverse capability of firepower. 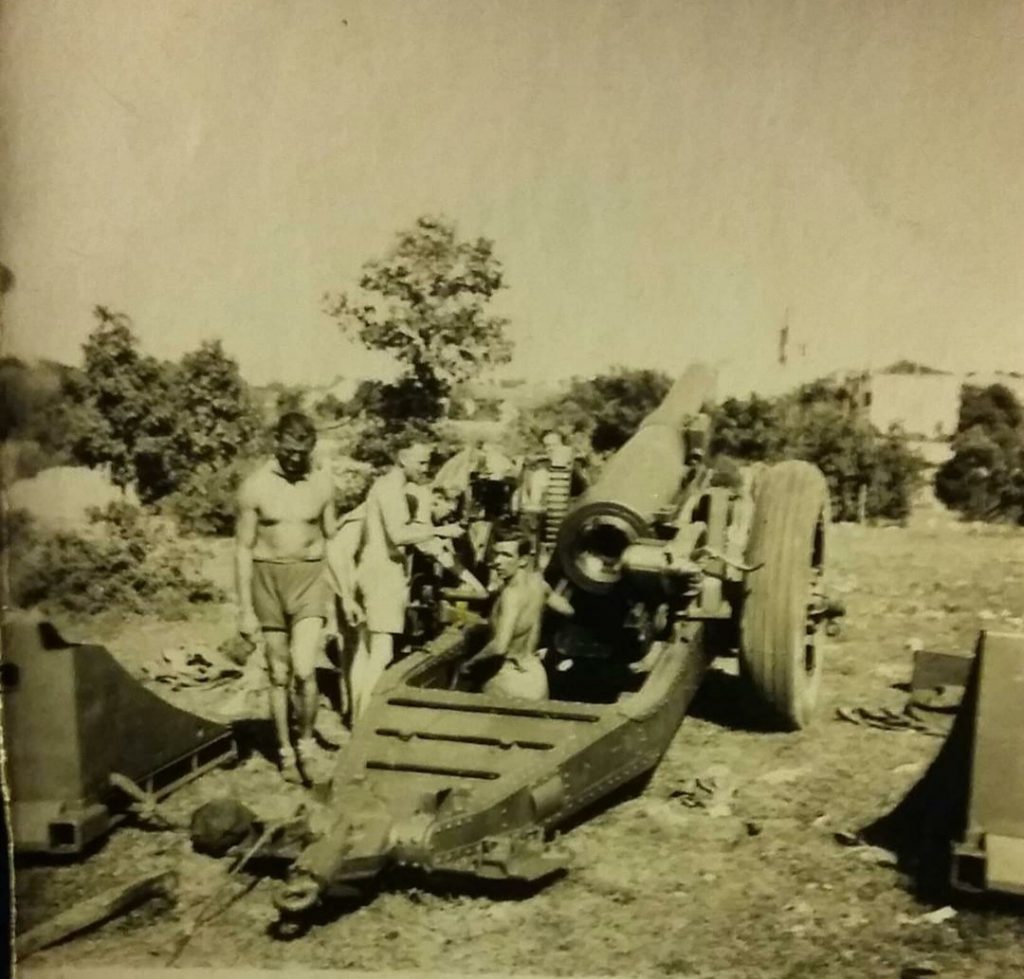 The Regiment sailed from Philippeville [now Skikda] Algeria, to Naples, Italy in March 1944, and went into action at Monte Cassino as part of 6th Army Group Royal Artillery (AGRA).

The Battery was instrumental in the final destruction of the hilltop monastery during ‘Operation Honker‘ (the 4th Battle of Cassino) and continued to support the 8th Army as it fought its way North through Italy. 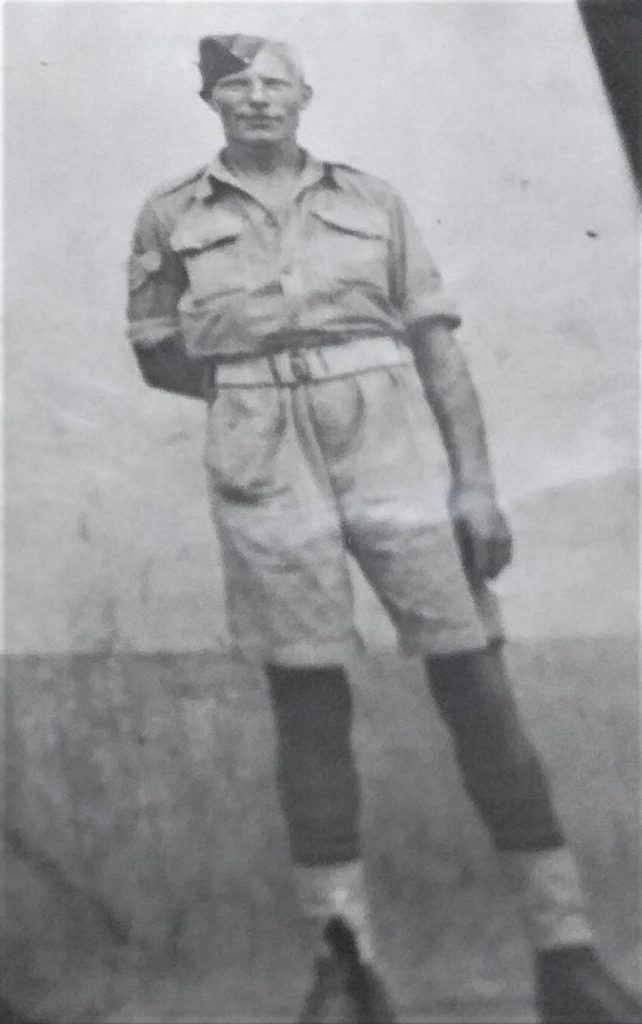 During the evening of 13th August 1944, while positioned a few miles South-east of Florence, 504 Battery together with 453 Battery, came under heavy shellfire. One member of the Regiment was killed and two others seriously wounded, including Sergeant Sheppard, who received an injury to his hand, losing three fingers.  While undergoing treatment for this injury at a Dressing  Station, the Station itself came under mortar bombardment, resulting in further injury in which he subsequently lost a big toe.

After he recovered, he was assigned to processing German Prisoners of War.

After demobilization, Sheppard settled in his wife’s home town of Sheffield, returning to his pre-war profession as a plumber.

Sheppard, in common with the other survivors, spoke little about the war but did recount his fondness for the Bren Gun and Bren Carrier, which he felt had been put to effective use supporting troops at Cassel.  However, despite his artillery background, his favoured wartime weapon was the Thompson sub-machine gun.

Alfred Sheppard died in Sheffield in February 1986 at the age of  70 years.