Francis John Raymond Felstead, known as ‘Frank’, was born on 22nd April 1919 and in the 1930s was brought up in Mitcham, Surrey.

In 1936, at the age of 17 years, he and his older brother Harold enlisted in the 23rd London (7th East Surrey) Regiment Territorial Army.  This was a T.A. Infantry Battalion based at St John’s Hill, Battersea, across the road from Clapham Junction railway station.  Harold went to the MMG Platoon and Frank to the Signals Platoon.

Over the next couple of years, although remaining as a Private, Frank Felstead qualified as a Signaller and then as a Signals Instructor. 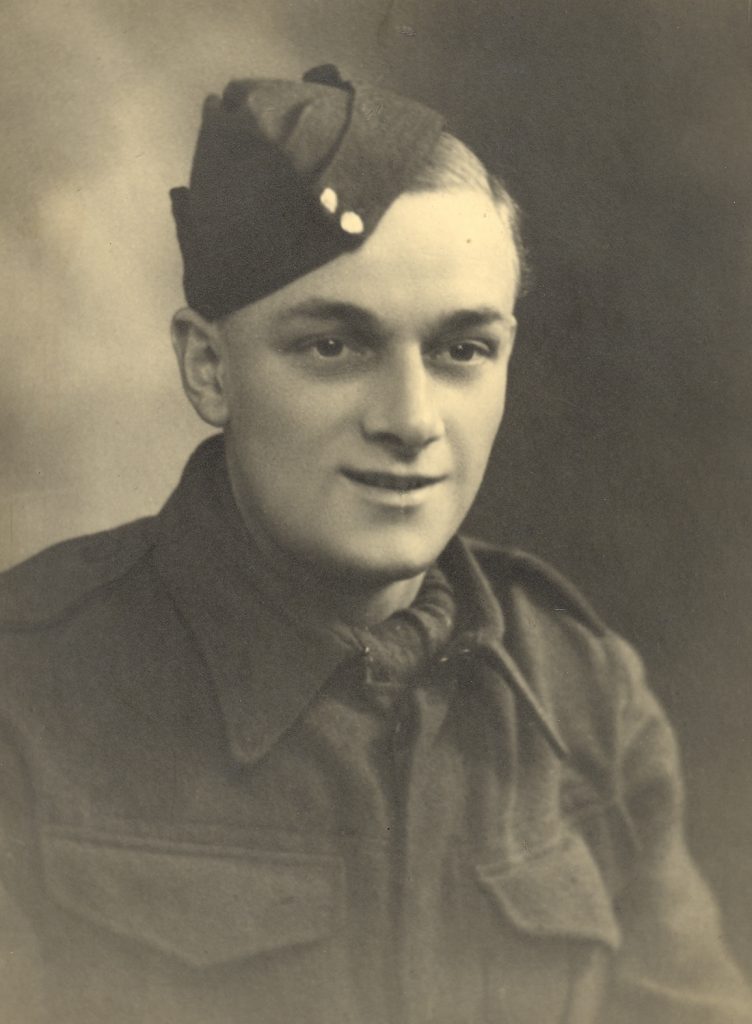 Frank Felstead, 1940. With thanks to Martin Felstead

The military enlargement that spawned the creation of 140th Army Field Regiment from 92 (5th London) Field Regiment, also impacted 23rd London Regiment and in 1938 they were converted to the 42nd Royal Tank Regiment.  At the time a tank regiment had about 150 fewer men than an infantry battalion (510 vs 670) and several T.A. soldiers were discharged from the Army.  Consequently, and coinciding with the Munich agreement in November 1938, Frank Felstead was discharged.

After the declaration of war, in September 1939, Frank Felstead, then 20 years of age, was in the first wave of conscription.  He reported to Euston Station on 18th October 1939 to re-enlist.  He went along with a school friend, Dennis Cradduck.  They had agreed to stay together and thereby get into the same unit.  As they stood in a straight line the Recruitment officer came down the line tapping each man in turn and announcing “139, 140, 141; 139, 140, 141; 139…etc.” and so by this method Dennis was assigned to 139th Field Regiment and Felstead to 140th Regiment. They were to next meet again in May 1940 on the Royal Eagle paddle steamer coming back from the beaches north of Dunkirk to Sheerness.  (This is mentioned in Walter Lord’s book The Miracle of Dunkirk).

Felstead took part in all of 366 Battery’s battles in Belgium and France.  At the  Messines Ridge on 28th May 1940 the Battery received the order to retreat to the coast after destroying the guns and most of vehicles.  Frank Felstead helped smash up the radio sets and other communications equipment with a pick-axe.

Moving to the coast, Felstead became separated from the main body and, together with a small party,  ended up at Bray Dunes a few miles east of Dunkirk. After three days on the beach with nothing to eat other than a jar of beetroot, and being turned away from many boat queues they decided to go it alone.  One of the group swam out and brought in a collapsible canvas canoe equipped with one massive oar and a canoe paddle.  Using these, and their rifle butts, the party got out far enough to be picked up by a RN cutter and transferred to the Royal Eagle paddle steamer (sister ship of the Crested Eagle that was sunk at Dunkirk). He landed at Sheerness on 31st May.

In 1941 Felstead, who had a lifelong interest in aviation and with the support of his brother, applied to transfer to the RAF.  Lt. Col. Brooks was unable to accept the transfer owing to his valuable skills as a signaller, as set out in this rejection letter. 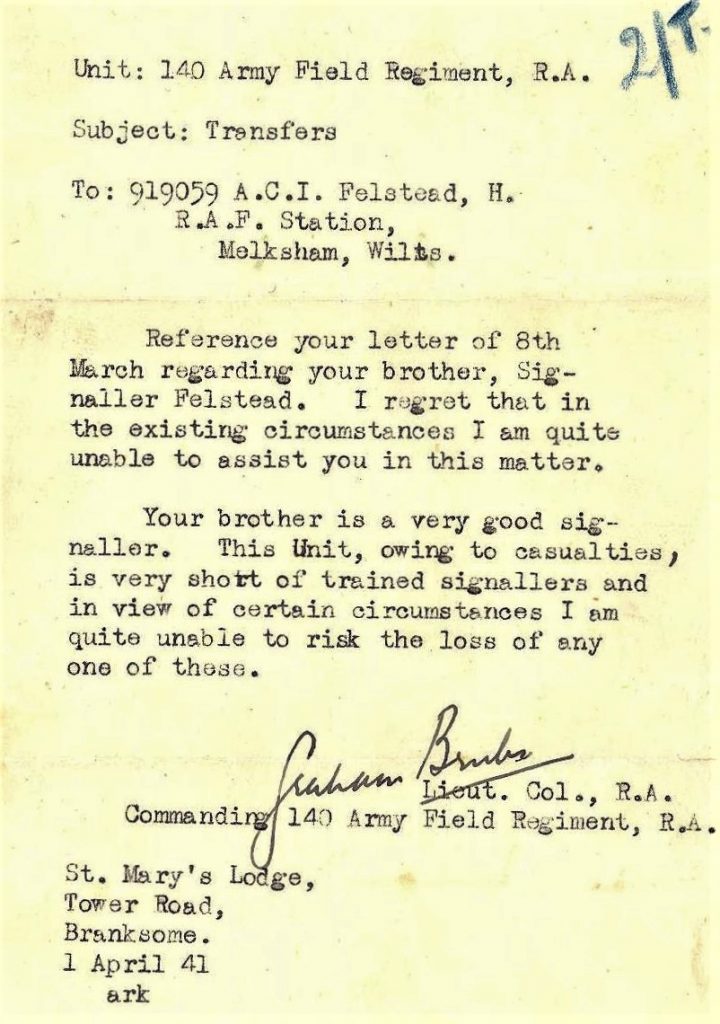 After Dunkirk, when the Regiment reformed, Frank Felstead was transferred to the new ‘A ‘Troop, 367 Battery and remained with them through Tunisia until 1943 when they had Bishop Self-propelled guns. 367 Battery’s armoured vehicles made them particularly suited to the rough terrain and they were attached to 6th Armoured Division for the battles of Medjez-el-Bab, Bou Arada, Goubellat Plain and the final attack on Tunis.

Later in 1943, the Battery underwent conversion to 4.5″ guns and Felstead served in Italy from January 1944 as Signals Sergeant in ‘A’ Troop, 367 Battery until the Regiment was disbanded in December 1944.

In 1945, Felstead reverted to his substantive rank of W/Bdr (Driver/Operator) and transferred to sound location in 8th Survey Regiment R.A.  He remained in Austria and Germany until he was finally repatriated and discharged in May 1946, at the age of 27 years, having spent 9 of those years in military service.

Frank married Jean Laing in 1948. They had two children- Martin, born in 1953 and Deborah, born in 1957. The family moved to Crawley, Sussex where Frank worked as a skilled toolmaker for various light engineering firms in the area.  He retired in 1984 and enjoyed gardening, sailing boats and flying radio controlled aircraft.

In 1993 Frank’s Jean wife spotted an advertisement for a 140th Field Regiment reunion in a room above a pub London.  Felstead went along, having taken no real interest in military matters post-war, and came back full of excitement having met men there, for the first time in 50 years, who had got off the beach with him at Bray Dunes in 1940. 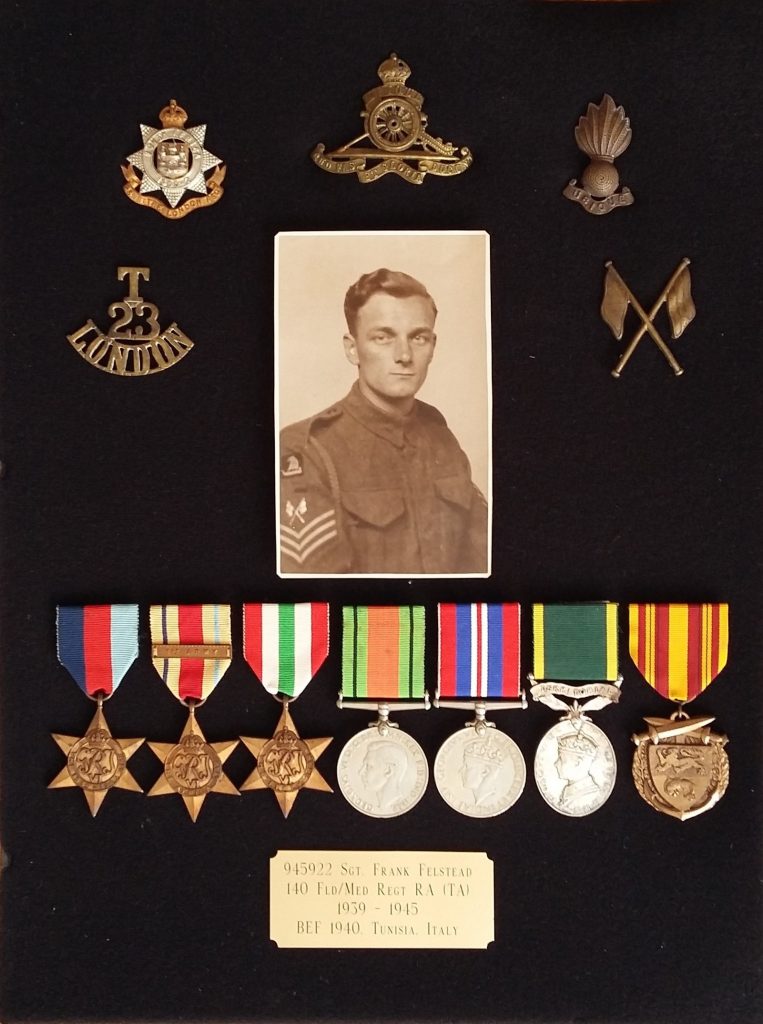