Captain Coll Lorne MacDougall was born in 1906 in Trujillo, Peru, the son of Coll and Jane MacDougall from Islay, Scotland.  His parents had been posted to South America, where his father managed a sugar plantation.  In the 1911 census he is recorded as  living in West Hampstead, London with his aunt, Colqishan MacDougall and great aunt, Nina Campbell.

It has not been possible to trace how Coll MacDougall joined the 140 Regiment in 1939.

At the age of 34 years, MacDougall became Officer commanding ‘D’ Troop, 367 Battery, and so I suspect he was my father, Lance Bombardier Eric West’s, senior Officer at Cassel.

It appears that Captain MacDougall evaded immediate capture during the breakout from Cassel.  He became a POW at Forges-les Eaux on 24th July 1940. This town is in the Normandy region and about 100 miles to the South-west of Cassel.  Thus MacDougall had lived off the land for nearly two months while he evaded capture, possibly with the help of French resistance.

Captain MacDougall was mentioned in dispatches in December 1945 after recommendation by the British Secret service, MI9.  The award was proposed for his communication from captivity with the War office in London, cryptically described as ‘by secret means‘. 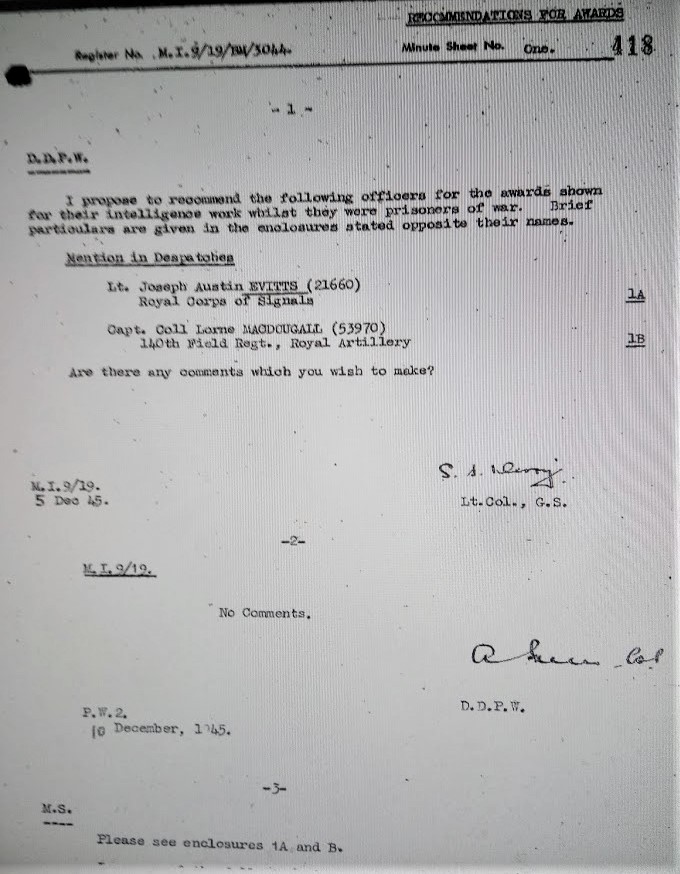 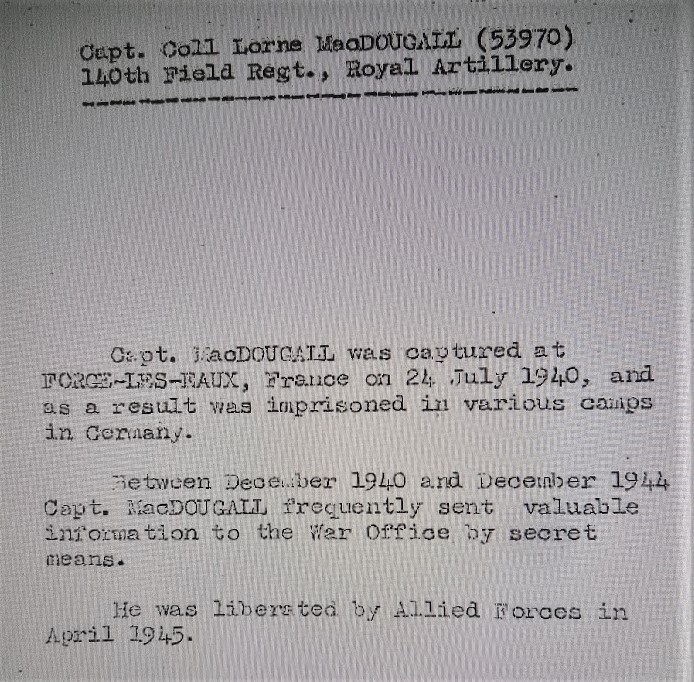 Capt MacDougall was captured on 24th July at Forges-les Eaux and as a result was imprisoned in various camps in Germany.  Between December 1940 and December 1944, Capt. MacDougall frequently sent valuable information to the War Office by secret means. He was liberated by Allied Forces in April 1945.‘

Captain MacDougall’s wartime service remains somewhat of an enigma.  He had married in 1935 in London and then remarried in 1967 in Enfield, Middlesex.

Captain Coll Lorne MacDougall died in November 1997 at Stansted Mountfitchet, Essex at the age of 91 years.