The Cassel breakout by the ‘Somerforce’ (145 Brigade) resulted in the death or capture of most of the men in its ranks.  A very small number successfully escaped to Dunkirk. British Officer POWs (who would have been in the age range approximately 30-50 years) were segregated from enlisted men into separate POW camps known as ‘Offizierslagers’ (abbreviated to Oflag). 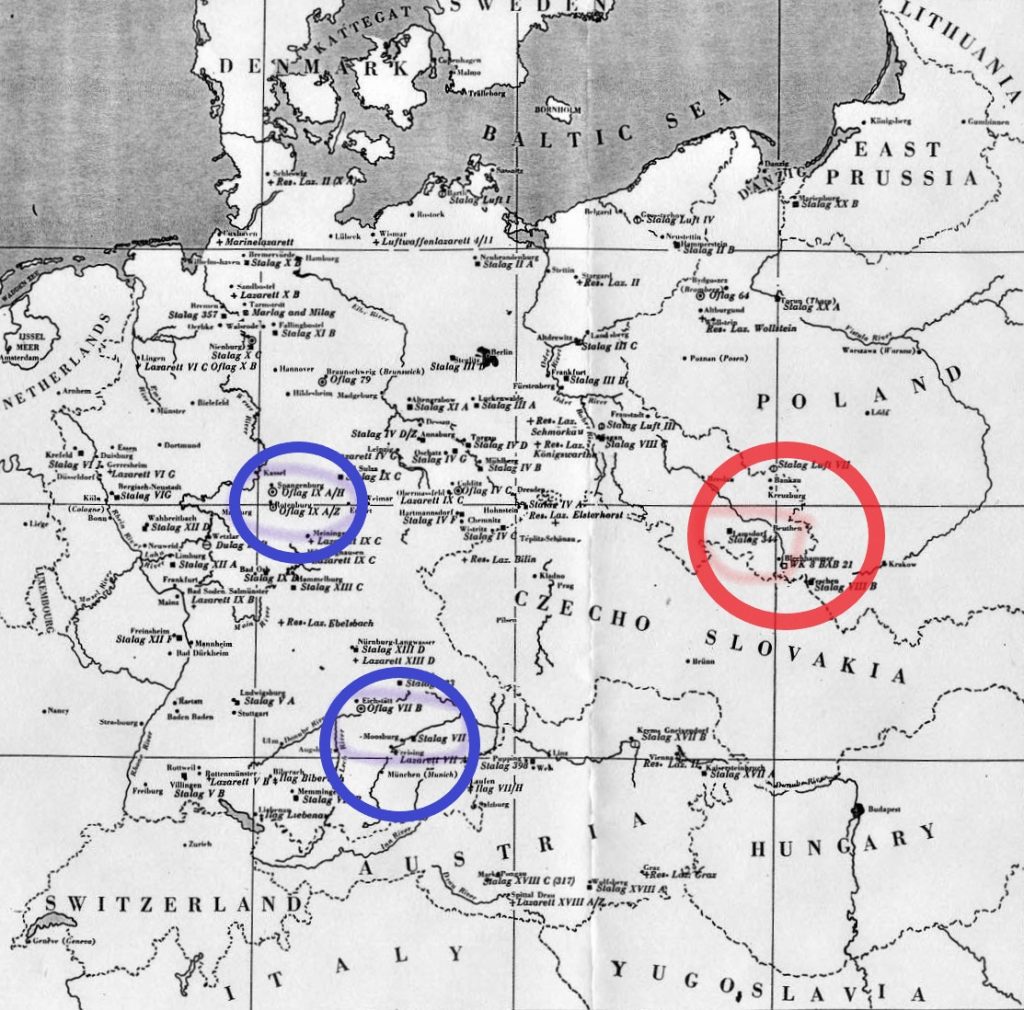 The main Oflags associated with 140 Regiment officers are marked by blue circles- to the north is Oflag IX A/H and to the south is Oflag VII, Laufen. The enrolled men were mainly captive at Stalag VIIIB Lamsdorf (red circle).

140th Regiment’s Commanding Officer Lt-Col Odling, wounded in the leg on 29th May, was captured in Cassel and taken to the Field Hospital in St Omer.

After his injury on the 29th May, Major Christopherson had been driven, in a concussed state, by a volunteer in a staff car out of Cassel but the car was intercepted by the Germans on the road heading towards Dunkirk.

Christopherson described the details of his injury and capture in a letter home that was transcribed by his wife and is set out below:

‘Lucky to be alive as, after a great battle at Cassel which we held for six days (after six days on the Dyle and a week retreating and fighting) struck by a piece of mortar that shattered the back of steel helmet, knocked unconscious and broke back of skull between the nerves for more than seven inches!  A volunteer tried to drive me back towards Dunkirk but we were captured and I came round to find myself a prisoner in hospital in St Omer.  Afterwards moved to Enghien near Brussels (a cross between a hospital and a prison with bad points of both).  After a month, left and after some moves arrived here [Oflag VII] August 16th.‘

Major Milton had managed to escape from Cassel on foot with his Driver William Martin (see ‘Breakout‘ section) but was seriously wounded a few miles to the East of the town in the small hours of 30th May.

Major Milton died in the German Field hospital at St Omer on 31st May 1940 and is buried at Longueness Souvenir Commonwealth War Cemetery, alongside six other members of the Regiment, including Bombardier Arthur Ross of ‘F’ troop.

Lt. May of F Troop, injured at Chateau Masson on 28th May, was able to escape at Dunkirk but was injured by German aircraft fire while on a little ship.  Lt. May died of his injuries in England on 21st June 1940 and is buried at the Commonwealth War Cemetery in Bromley Hill, Kent.

Thus, the three senior officers of the Regiment, Lt. Col. Odling, Major Christopherson and Major Milton, all injured in the battle, were escorted by the Germans to the Field Hospital at St Omer for treatment of their injuries on 30th May 1940. 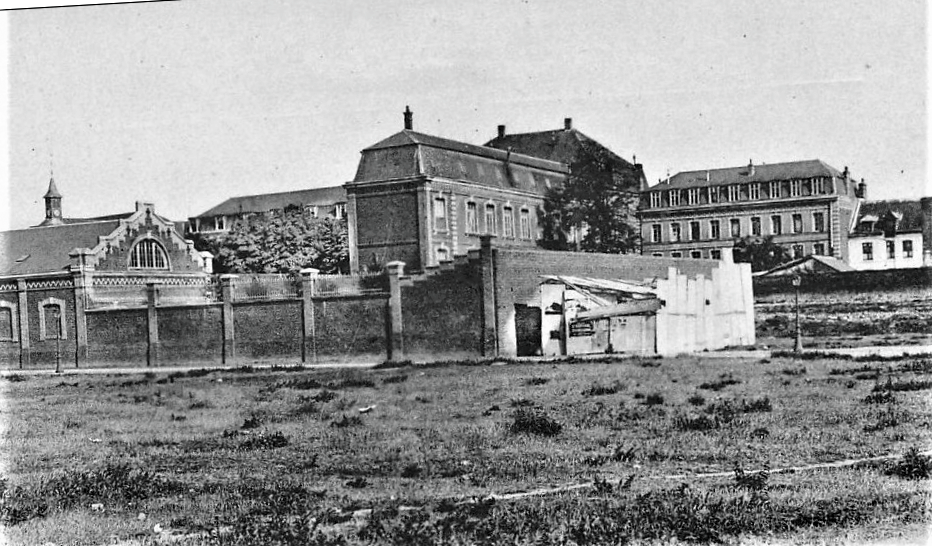 Buildings at St Omer used as a field hospital in 1940

St Omer is approximately 13 miles to the West of Cassel and was in German hands by May 25th.  The field hospital site is now occupied by a large prison complex just to the South of the Commonwealth War Graves Cemetery at Longueness Souvenir.

Major E.A. Milton died while under treatment on 31st May; Lt. Col. Odling and Major Christopherson were judged to have recovered sufficiently to transfer from the hospital into captivity on 4th July 1940.

Ironically for the Cassel captives, both Oflag IX camps were close to the German town of Kassel in north-eastern Hesse.

Lt Col. Odling and Brigadier Somerset were both interred at Oflag IX A/H. 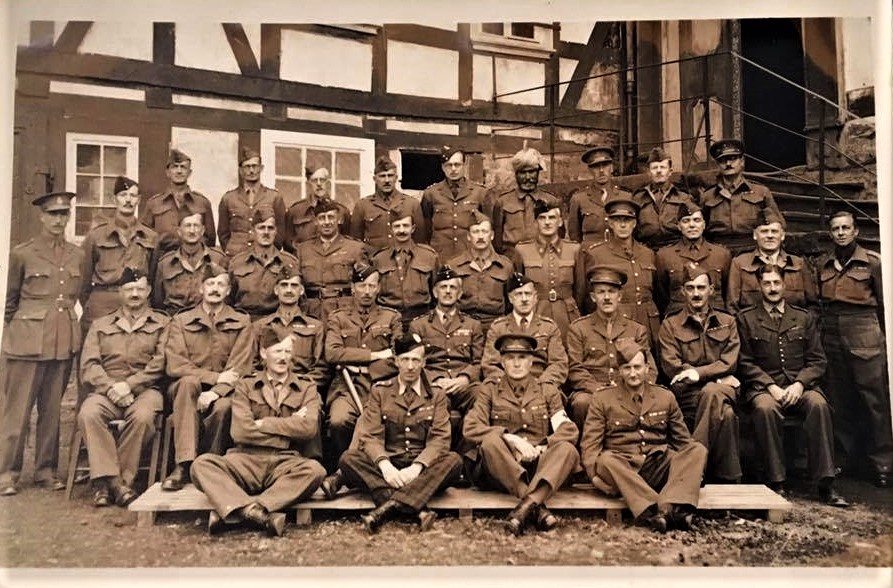 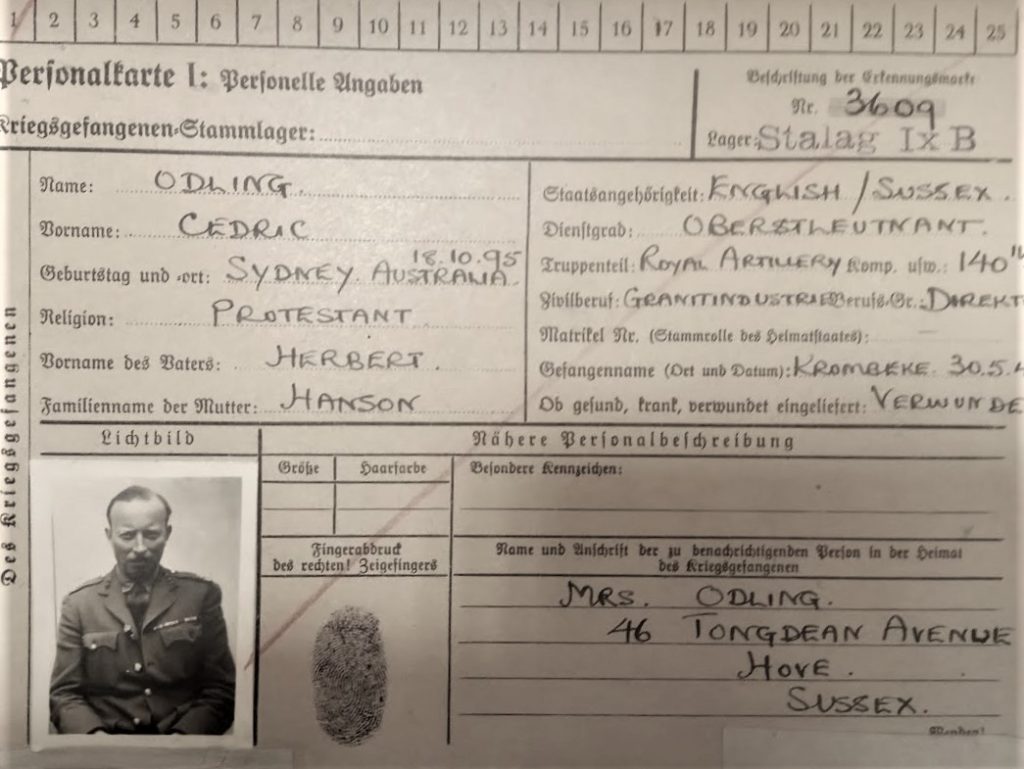 The Commanding Officer, Lt. Col. Cedric Odling had been wounded by a shell fragment injury to his lower leg.  He was taken to the Field Hospital in the town square where he would have been captured along with the other wounded officers and men left behind after the breakout. I have obtained a postcard he sent to Winchester School from his captivity in Oflag IX on 31st March 1941.

31.3.41 Many thanks for yours Jan 16. Your previous letter not come, but will roll along one day I expect. Nevill Chris. [Christopherson] was my 2nd in C. but not in this camp which consists mainly of grands blesses, docs & padres waiting repatriation…..I have a bad knee ‘subluxation’ the docs call it and urgently need treatment for resulting damage to nerves in foot….. 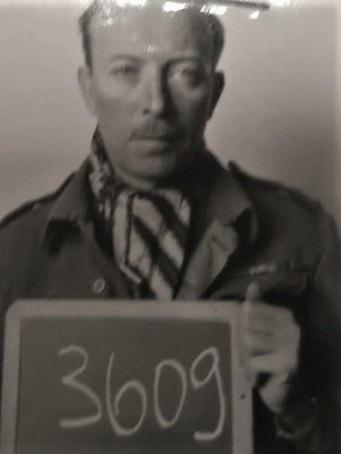 Cedric Odling was eventually repatriated to England in October 1943, and I have a copy of a letter sent on his arrival home to Winchester School.

November 1943. ‘Yes I am actually home again, at last, and even now I can hardly realise it is not a dream Both the Swedes and the North Sea were extraordinarily kind to us and I am really very well indeed.My knee continues to improve…..The goons morale is getting steadily lower, the guards have for some months past been existing on a pathetic trust that somehow or another a miracle is going to save them from the Russians and that we are going to make a separate peace with them…….Yours sincerely Cedric Odling’

Brigadier Somerset was captured with his party of HQ staff and two German prisoners approximately 7 km South of Hondschoot (in his diary he recalls noting a road sign stating this distance). 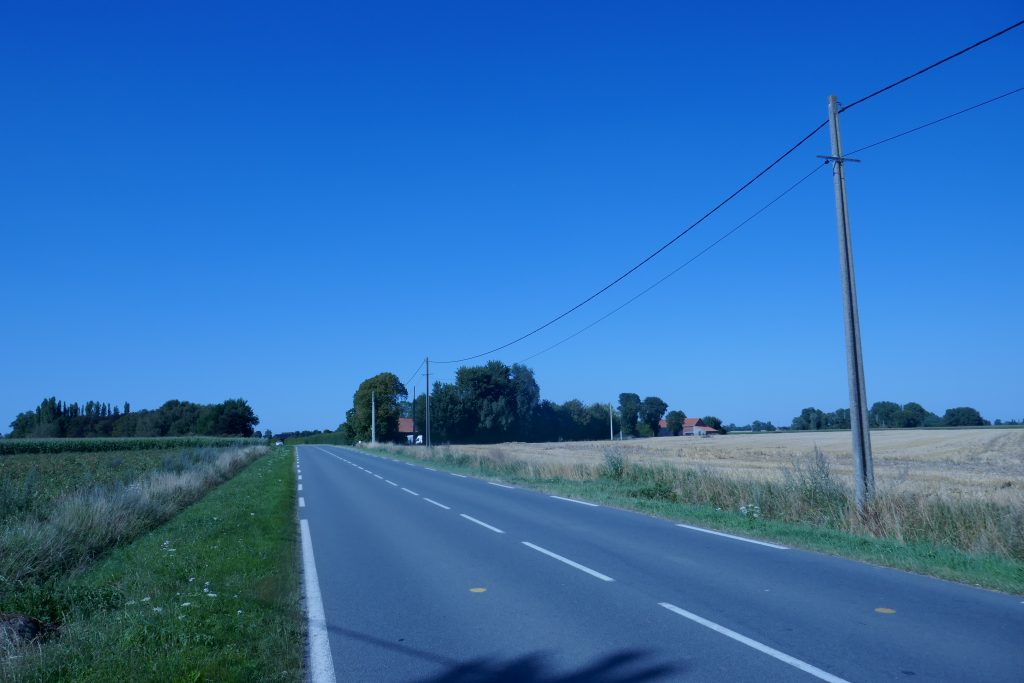 He was taken by truck to St Omer where he was briefly interrogated- in perfect English- by a German Officer who had been Cambridge educated.  The Officer questioned what had happened to the British Army.  At this stage there was uncertainty about the possibility of a British counter-attack, although in truth Operation Dynamo was by now in full swing.

Somerset remained in captivity until the end of the war. He was initially transferred to Oflag VII, Laufen, where he was briefly reunited with some of his fellow 145 Brigade officers.  However, against his wishes, a fortnight later he was transferred to a camp at Konigstein in Saxony, which housed many French and Polish senior officers but had no British presence.  From there he transferred to Oflag VIII-E, Johannisbrunn, located in the spa town of Jnsk Koupele in the Czechoslovakian part of Silesia, which also had no significant British presence.

Somerset’s fourth POW camp was Oflag IX, Spangenberg in Hesse, Germany where he was again reunited with fellow British Officers, including Lt Col Odling, and the all-important British Red Cross parcels. He became Senior British Officer (SBO) there, a role that he maintained throughout the majority of his captivity.

Somerset, along with most of the fit prisoners at Oflag IX, was transferred to Oflag XIB, Dossel in Warburg; he was then returned to Oflag IX and from there transferred eastwards to the Polish town of Torun (Oflag XXA, Thorn).

Finally, towards the end of the war he was transferred back to Oflag IX at Spangenberg, from where he was liberated by American forces in March 1945.

In 1943 he was asked to lead a delegation of senior British Officer POWs commissioned by the German authorities to witness their investigation of the Soviet massacre of Polish Army officers at Katyn, a task that Brigadier Somerset wisely declined. 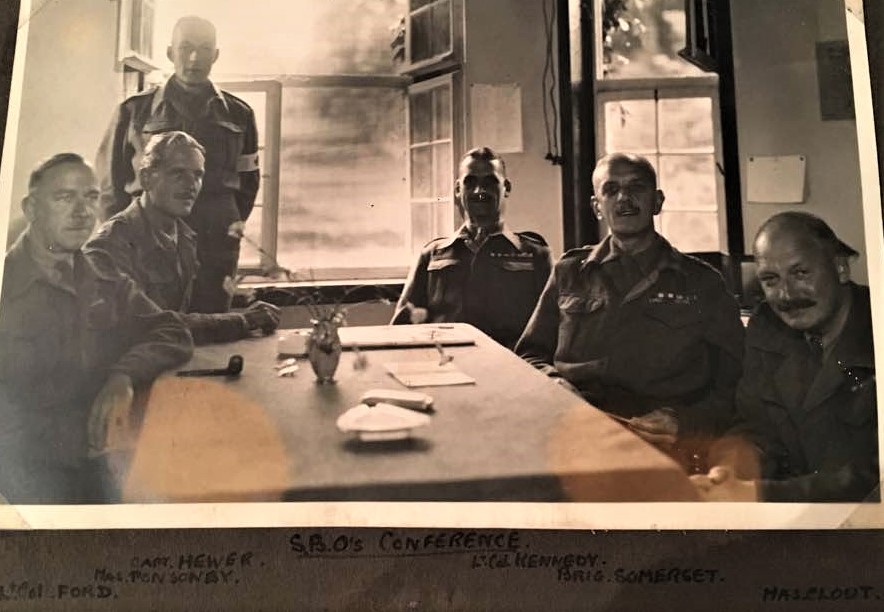 Brigadier Nigel Somerset, 5th from left, at a SBO Conference in Oflag IX.

The majority of the other 140th Regiment Officers were transferred to Oflag VIIC in Laufen, Bavaria. 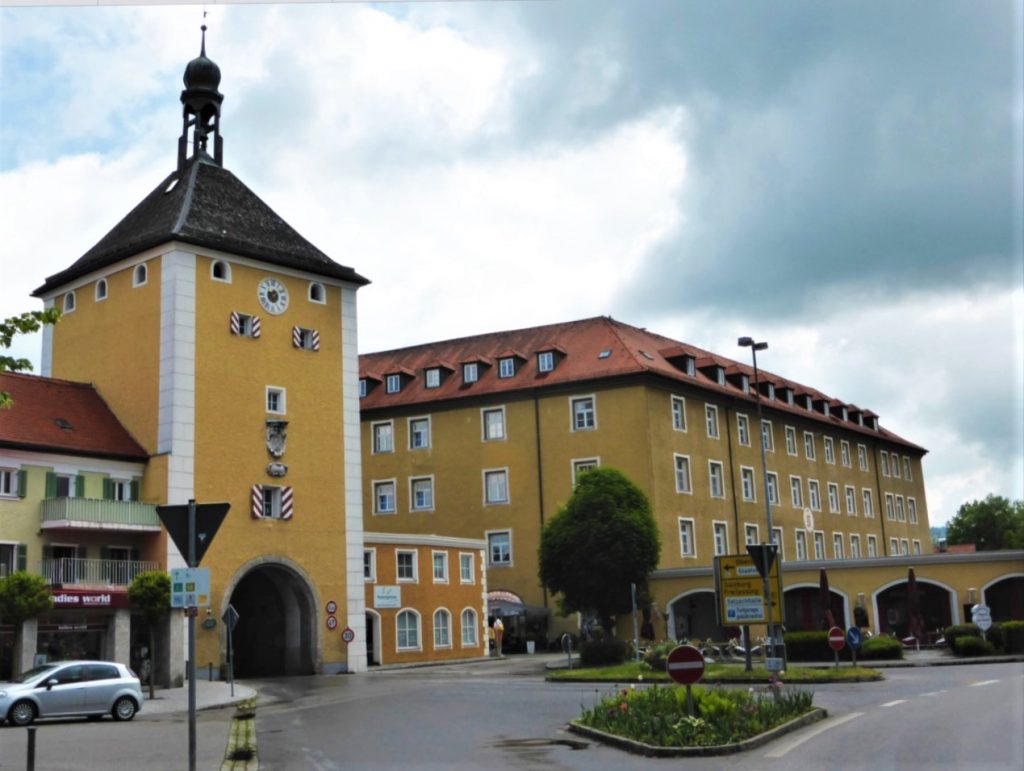 Major Christopherson arrived at the camp in August 1940 and wrote in June 1941 to describe conditions in Oflag VIIC as follows, the letter having being transcribed and type-written by his wife: 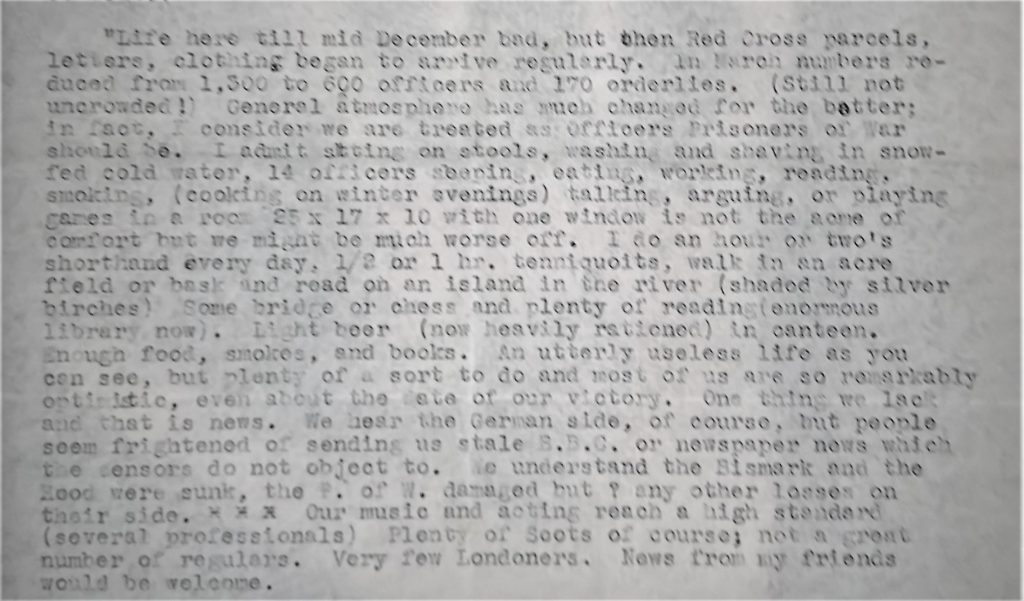 ‘Life here till mid December bad, but then Red Cross parcel, letters, clothing began to arrive regularly. In March numbers reduced from 1,300 to 600 officers and 170 orderlies. (still not uncrowded!) General atmosphere has much changed for the better ; in fact I consider we are treated as Officer Prisoners of War should be. I admit sitting on stools, washing and shaving in snow-fed cold water, 14 officers sleeping, eating, working, reading, smoking, (cooking on winter evenings) talking, arguing, or playing games in a room 25x17x10 with one window is not the acme of comfort but we might be much worse off………….Very few Londoners. News from my friends would be welcome. Nevill Christopherson’ 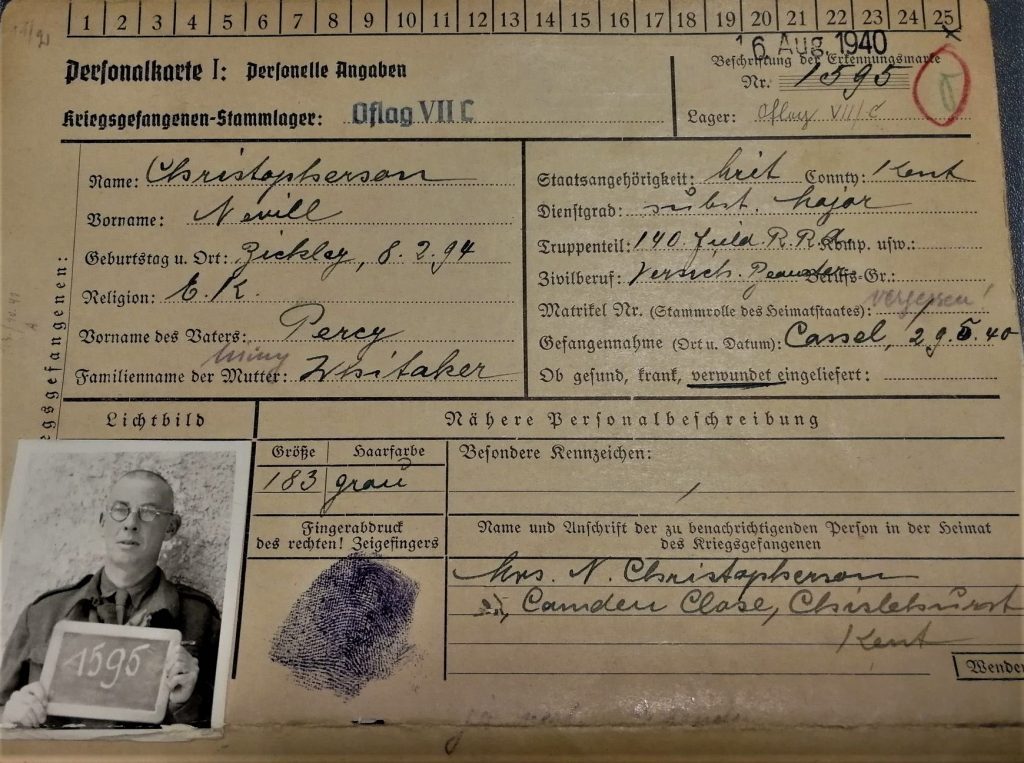 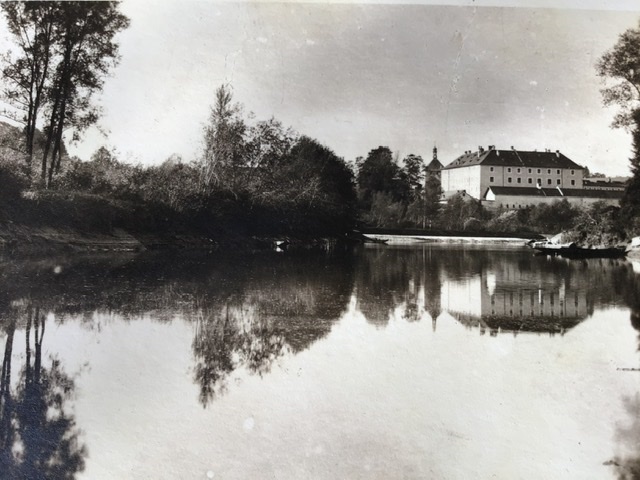 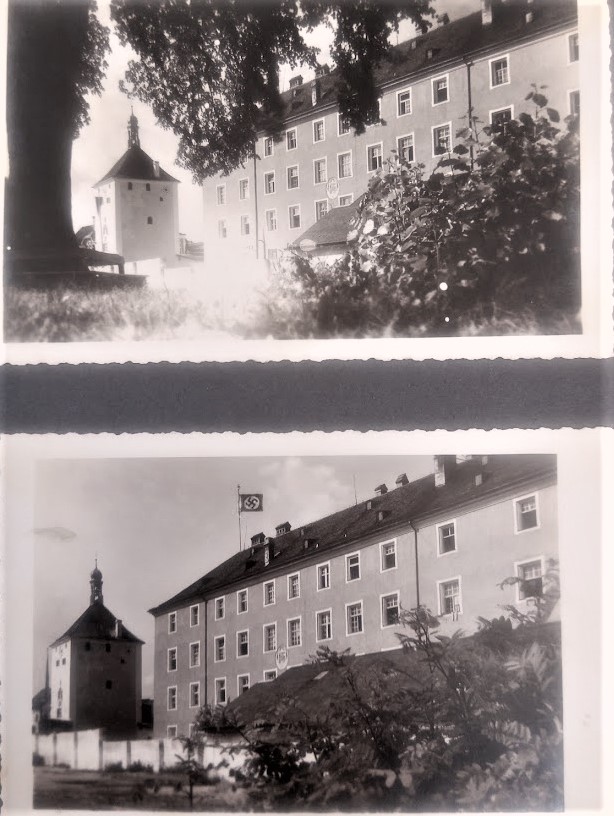 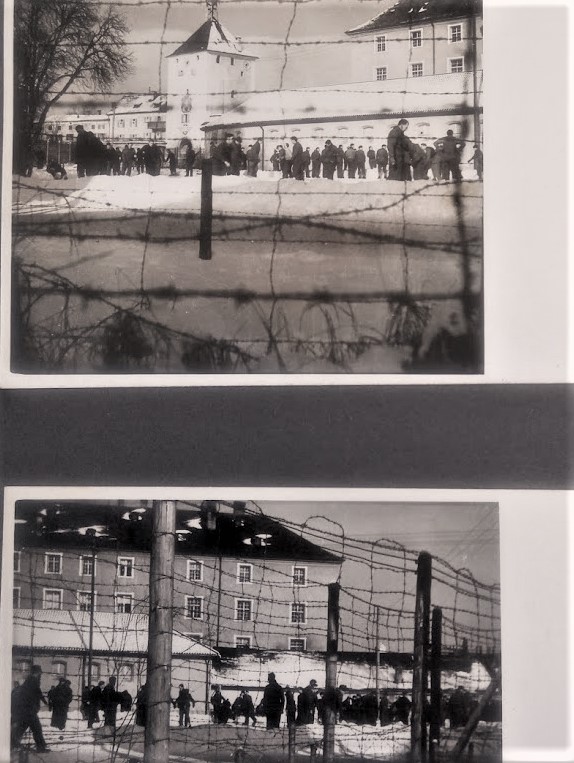 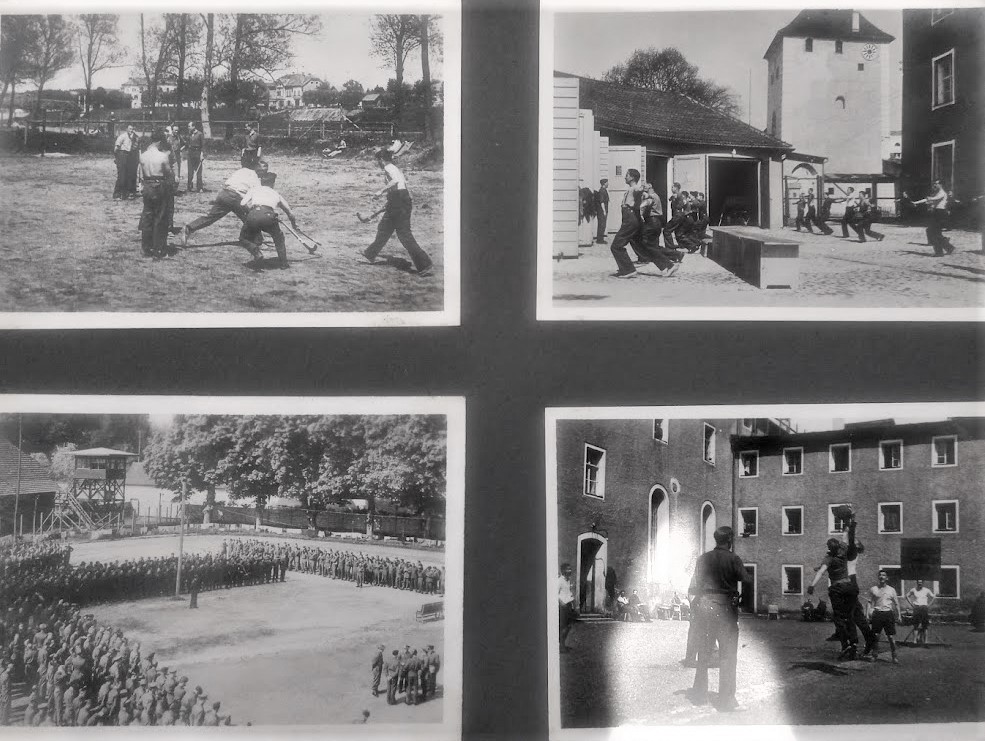 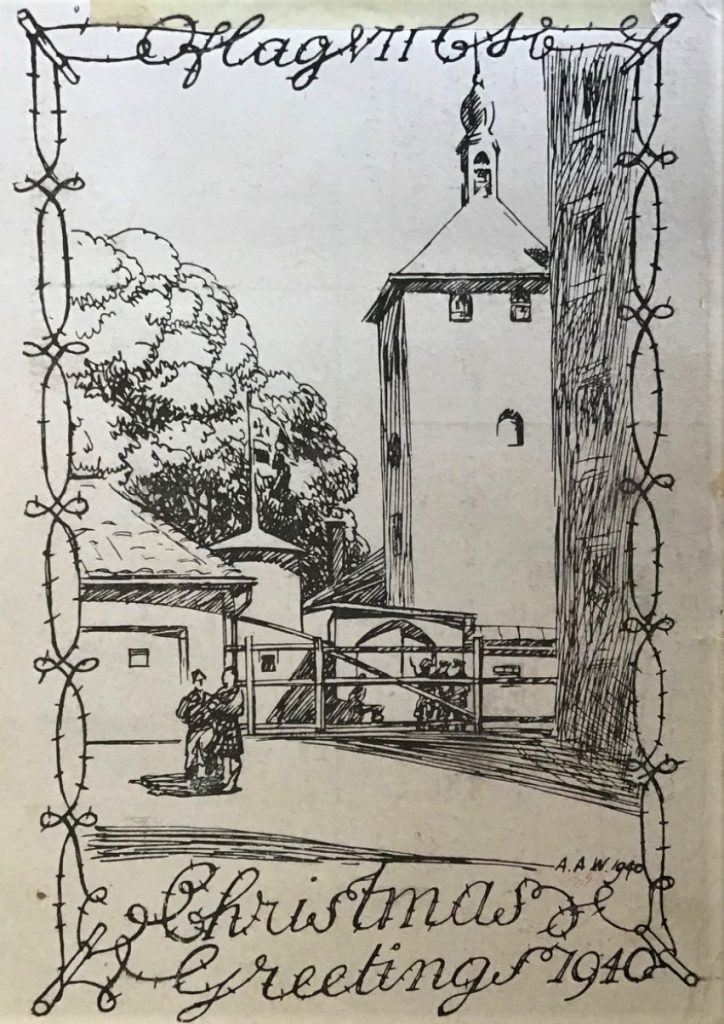 Captain ‘Tom‘ Hood had managed to make progress on the Breakout but ran into German troops in Winezeele. His capture is described in the ‘Breakout‘ section.

Captain Hood kept a detailed diary during his captivity during 1940-45, some of which featured in newspapers of the time.  This is an article that appeared in War Illustrated  based on Captain Hood’s diary in March 1941 (with thanks to Helen Hood). 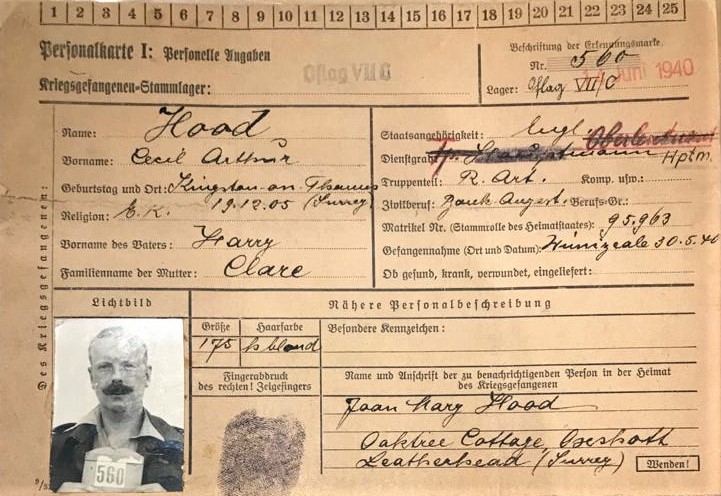 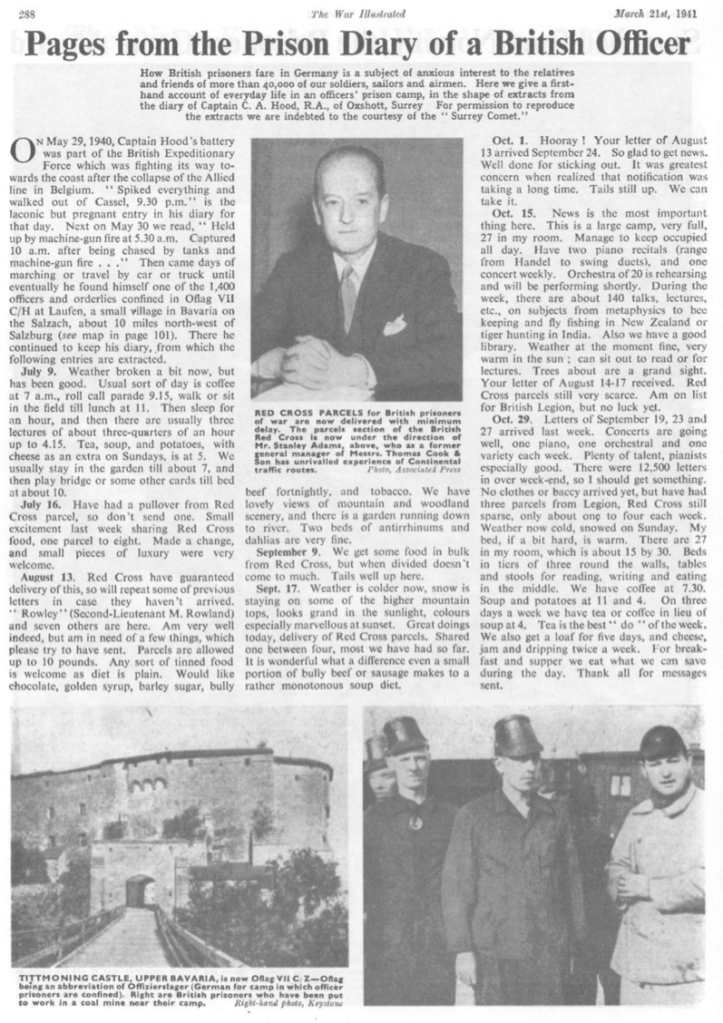 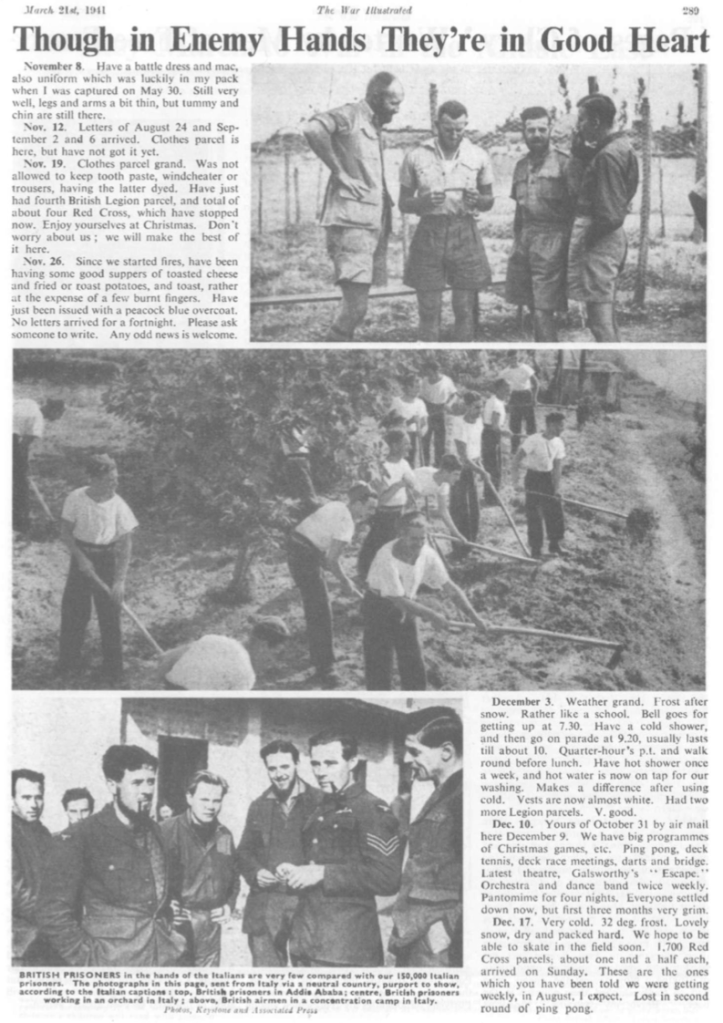 Captain Sirkett brought back several very atmospheric sketches from his captivity, and thanks to his widow Sally Sirkett, I am able to reproduce them here: 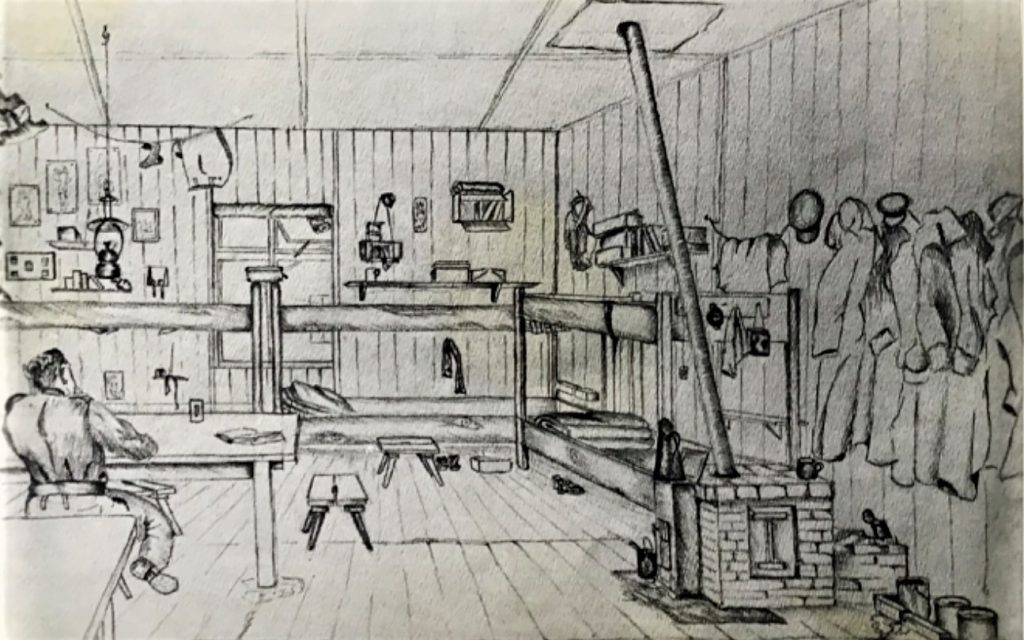 Sketch showing the inside of [presumably] Hut 61, Oflag VIIC 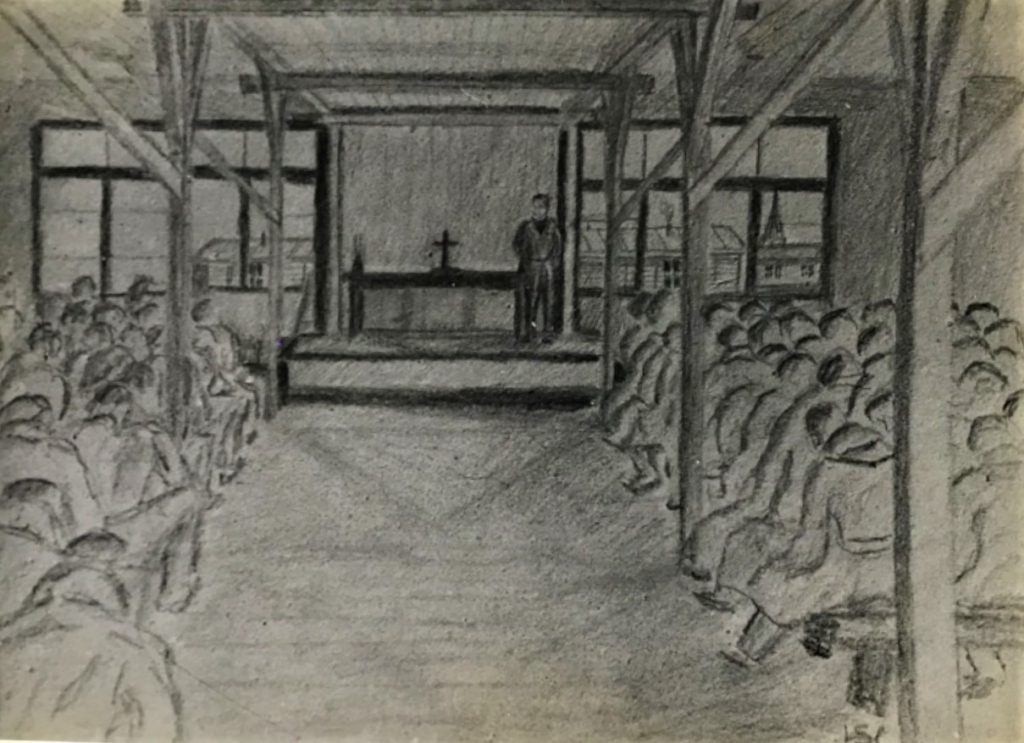 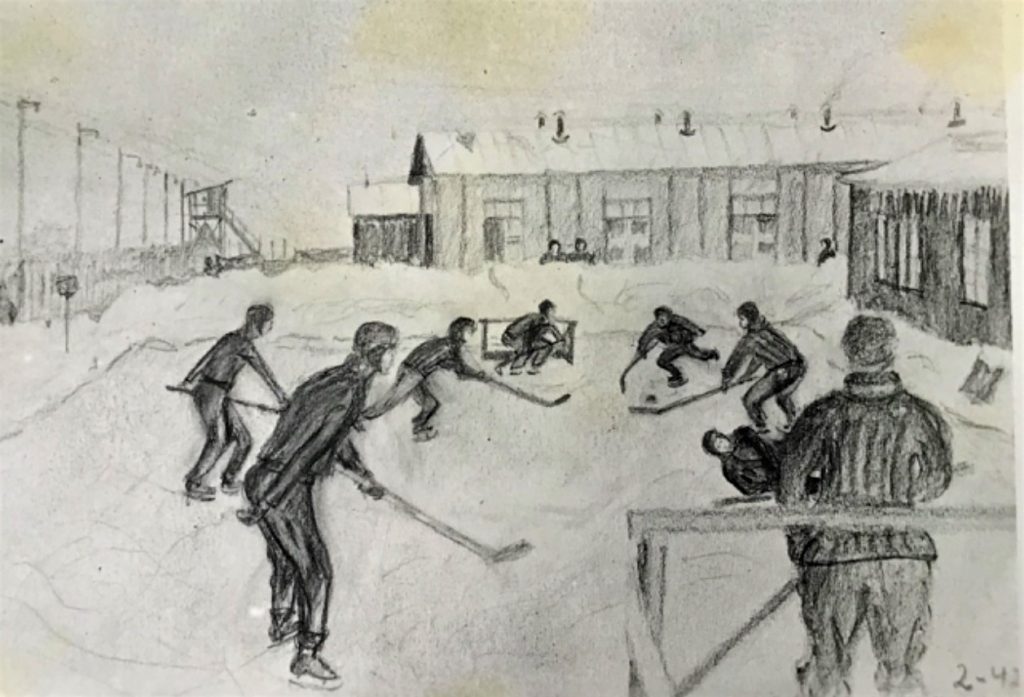 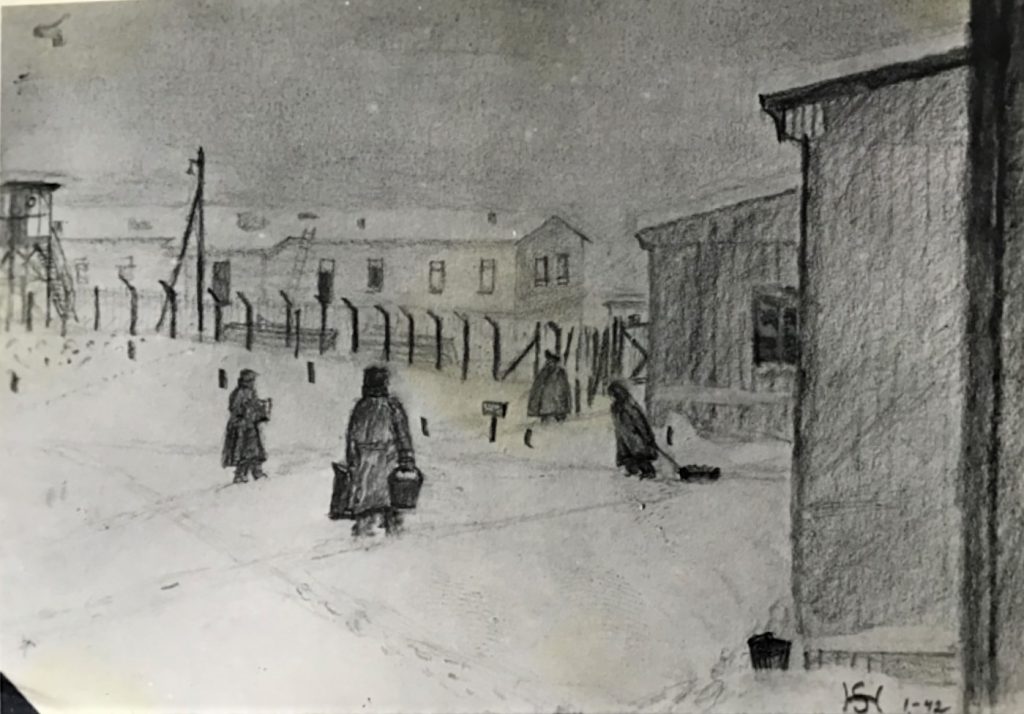 Captain Baxter was also transferred to Oflag VIIC and, again thanks to Sally Sirkett, I can reproduce copies of his correspondence home from that Oflag:

‘…When we first arrived we were weak from exhaustion and hunger, but are now getting fit.

There are lectures indoor games. We have formed a concert party, orchestra a dance band, library and individual officers give piano recitals.  There is a fair amount of room for outdoor exercise. Reveille is at 07.30 am with German coffee. Parade at 09.15 am, Lunch at 11.00 am, then tea at 4 pm. Then we can have supper meal any time from 7 pm. There are 70 officers in my room (No. 61) [including Paddy Sirkett and Capt Cecil Hood]

We sleep on straw mattresses, rather a tight fit. Cold water for washing, hot shower once a week on Wednesdays. Pay day 3 times a month.  Canteen sells drinks, toilet articles, clothes etc. But rather expensive. So to bed at 10. 30 pm.

‘..I do not want my coat, I had one given me here.  The first three months were grim, no news, no parcels, no clothes.  Things are better now, more organised. Pantos will be put on at Christmas. Games and competitions also.

My last batman was killed and Paddy’s batman too. Jack was hit on May 27th in the afternoon. I was at an OP [outpost] at some distance away.  The German tanks [were firing] from 300 yards, several were killed or wounded Jack continued to direct fire while on the ground, showing great courage and example. As his troop commander recommended him for the Military Cross.  I did not see him again.  We were taken [captured] on May 30th.  I was very lucky,  bore a charmed life as the battery was under fire continuously.  We had three weeks constant fighting being among those to go into Belgium to the most forward position.  We did see life! 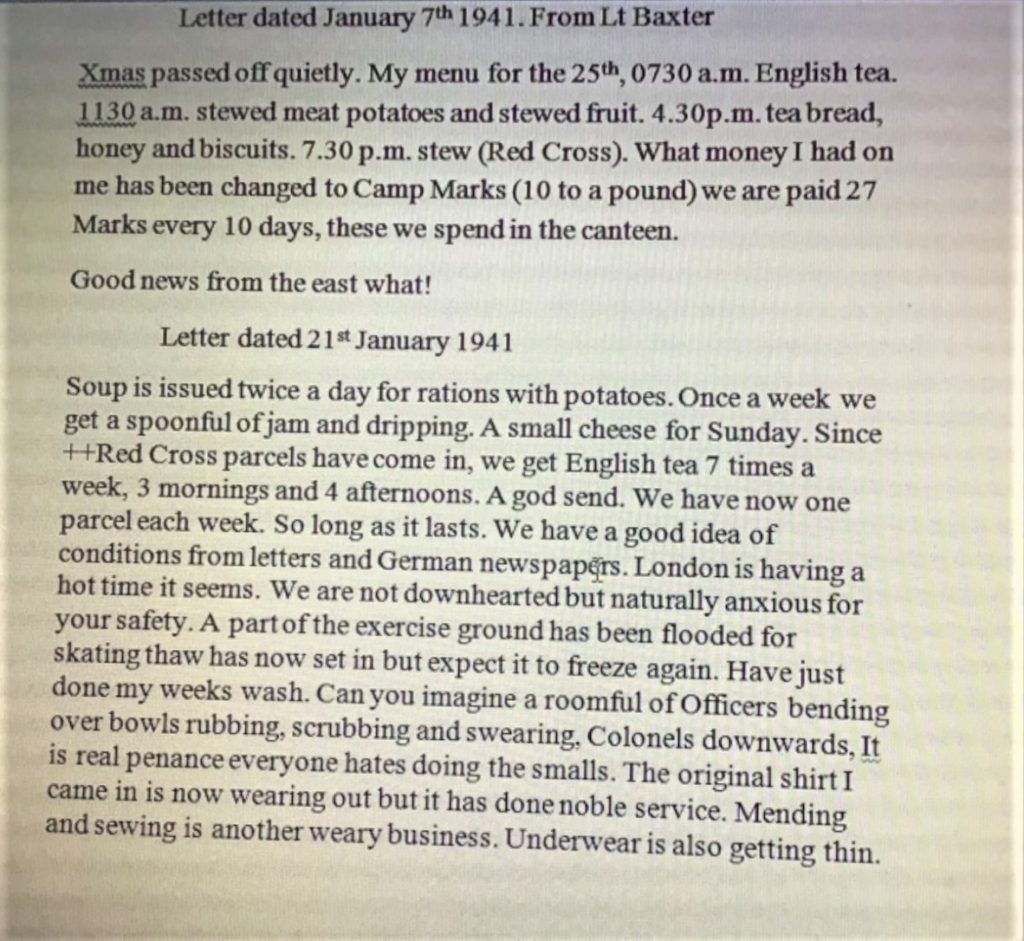 Captain Harold ‘Tommy’ Westley was a professional soldier who had relinquished his previous rank of Major to re-join the British Army in 1939.  He enlisted into 140th Regiment as a Captain.

Captain Westley was captured at Watou on 30th May 1940 and in December 1945 he was mentioned in dispatches for his bravery in his repeated escape attempts from captivity, including the mass breakout from Oflag VB, Biberach in September 1941 and at least two tunnelling attempts at Oflag IX A/Z. 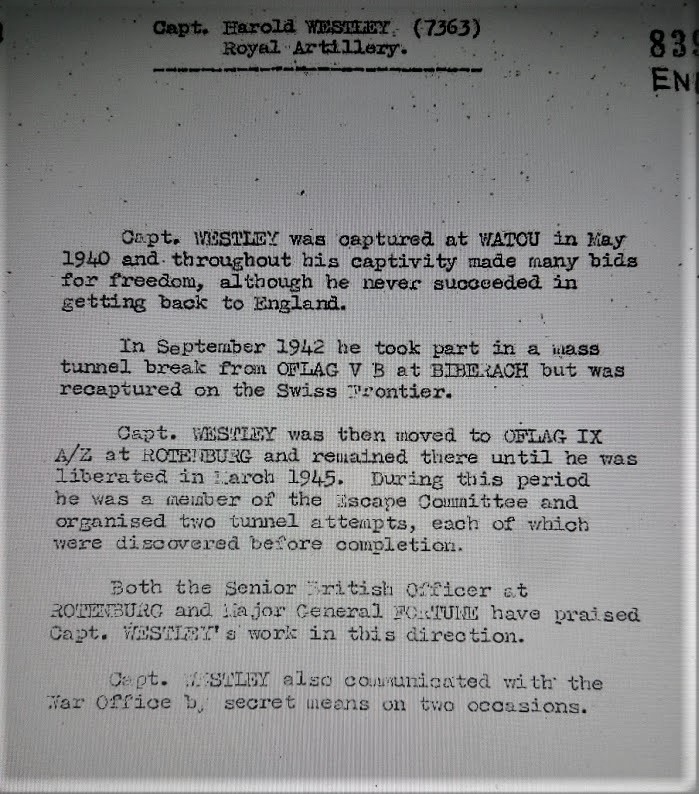 The mass escape from Oflag VB took place on 13th September 1941. Twenty-six POWs got out through a tunnel.  Four of the group managed to reach Switzerland (a journey of about 70 miles). The rest, including Captain Westley, were recaptured.  The large number of escape attempts, and the close proximity to the Swiss border, prompted the Germans authorities to move the prisoners to other camps in 1942. The successful escapees included Lt. Duncan, his report is in the British National Archives WO/208/3307/26 with a more extensive autobiographical account published in the book ‘Underground from Posen’.