The Aftermath of Battle

Of the 321 men of 367 Battery, 140th Royal Field Artillery 102 were killed or wounded, 216 were captured and just three managed to escape to Dunkirk.

The following Regiments fought as part of 145 Brigade (Somerforce) at Cassel:

-The 4th Oxford & Bucks Light Infantry (OBLI)- 670 men, of whom 85 were killed or wounded and approximately 500 men participated in the Breakout, most of whom were captured.

-TA Battalion of the Cheshire Regiment.

German soldiers were encouraged to take personal photographs during the occupation of France, and official German film and photography crews were attached to the forward units.  By contrast, photography wasn’t allowed in the British Army, which explains the emphasis on a defeated Allied army in many of the images of the 1940 conflict.

After the German occupation of Cassel, there are numerous images of abandoned 140th Regiment assets, including at ‘Dead Horse corner’, on the Rue Marechel Foch, the Rue de Berges and in the Place du General Vandamme.

There are few images available of German tanks disabled by the B.E.F, however it is estimated that the battle culminated in the destruction of nearly 100 tanks in the immediate area of Cassel.

German Tank disabled at ‘my campaign’ 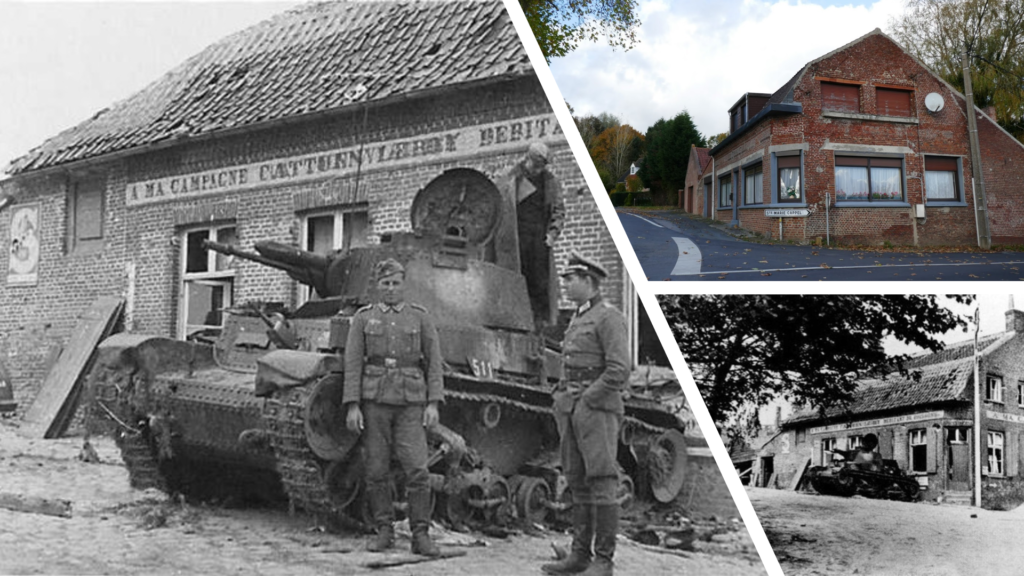 Disabled German tank on C301 road, close to the Chateau Masson HQ to the South of Cassel, 1940 [and 2019]. The Panzer 35 (t) tank number 511 belongs to the Second Battalion, 5 th company 1er Zug. It was destroyed at the crossroads of roads leading to Saint Marie Cappelle  and Oxelaëre at a place called “My Campaign”.  The anti-tank gun was probably the RHA 2-Pounder  [image below] positioned about two hundred metres above the crossroads. 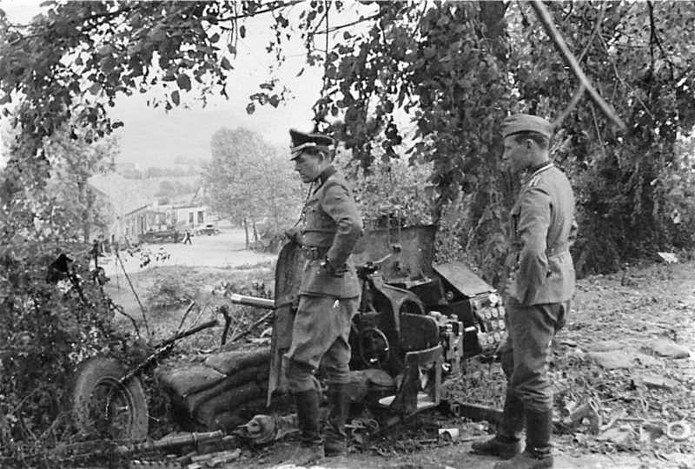 The battle at Bavinchove (Cassel Station) 27th May 1940

The first company of the 11 th  Panzer regiment was assigned to the von Esebeck tactical group.  German Panzer officer Jurgens described the attack as follows:

“Ltn. Bode, of the motorized company and the 1./11 are at the head of the march.  We are progressing slowly, feeling the ground. In front of Bavinchove we are attacked from the heights of Cassel. In the locality, a railway line crosses the road, which is our axis of progression towards Cassel. Two locomotives had been placed there to block our path. I have two Panzer IVs placed at the exit of the locality to ensure our safety. Grenadiers voltigeurs are posted near the houses. The tanks of the 1./11 are in front of the locality ready to intervene.  Colonel von Esebeck asks me to attack, I’m about to do it as soon as the locomotives are moved. Suddenly, everything cracks around us, everyone takes shelter. Panzer IV’s open fire. Two English caterpillars are destroyed. The commander of the motorised company, Lt Col von Seckendorff arrives at my position. In front of us, we have Englishmen who defend themselves fiercely. English caterpillars descend on the road to Cassel. The first is destroyed by a Panzer IV, the others turn around.  During the night, Lt Col von Seckendorff ensures security with infantry. The tanks are resting. We are preparing the attack on Cassel for May 28. 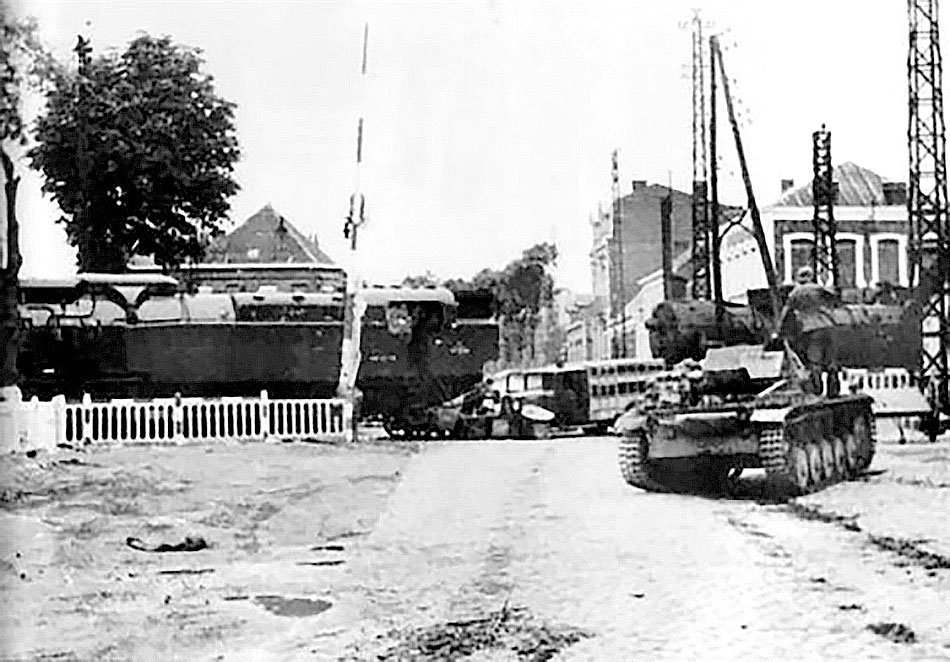 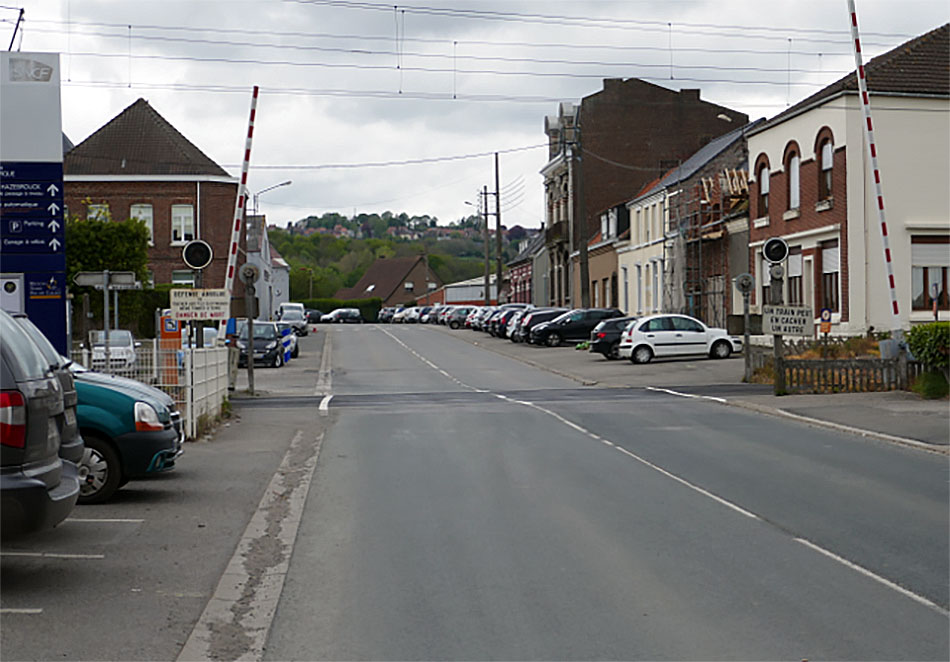 The railway station that serves Cassel in the village of Bavinchove. The images show the railway crossing in 1940 and 2019.  British Engineers had positioned railway locomotives on the crossing to obstruct the D933 road.  B&W image from ww2talk.com

‘A’ Company, 2nd Battalion Gloucestershire Regiment were sent to defend Zuytpeene. In the churchyard there are three Commonwealth War graves with an unusually large date range of death.  The three bodies of Privates King, Sims and Tilling were said to have been found dead in the church tower, which was being used as observation platform. The Germans realised this practice and church towers were usually the first thing to be shot at by approaching German artillery. 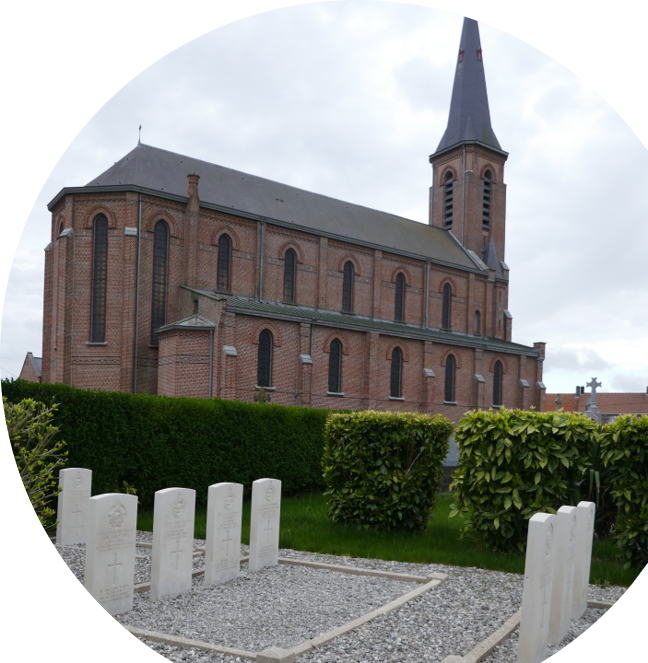 The ‘picket’ village of Zuytpeene. The church and Commonwealth War Graves in 2019. 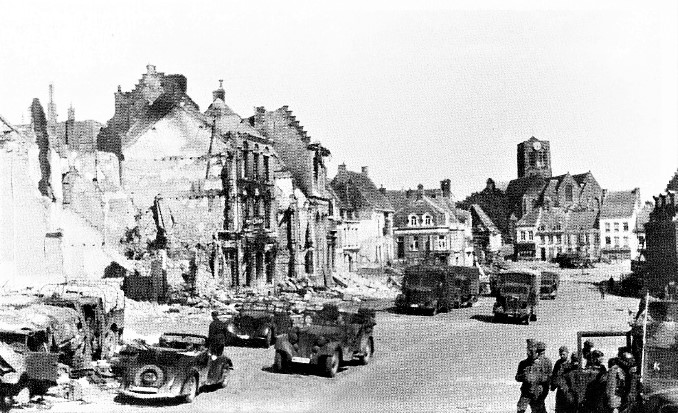 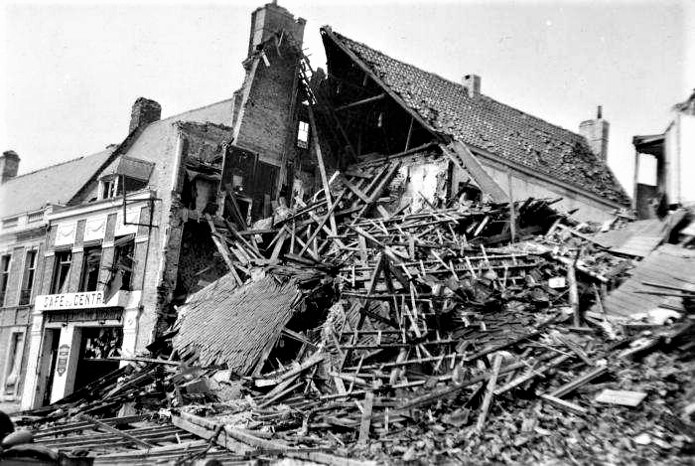 Cassel sustained considerable damage during the battle. The museum was destroyed with all its Flemish artifacts. Rebuilding continued until the 1970’s 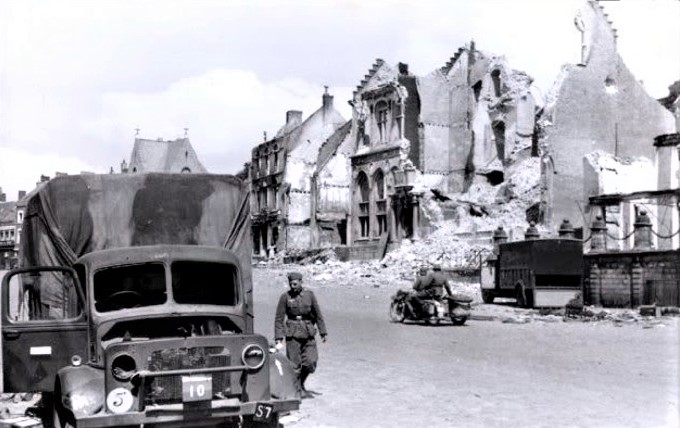 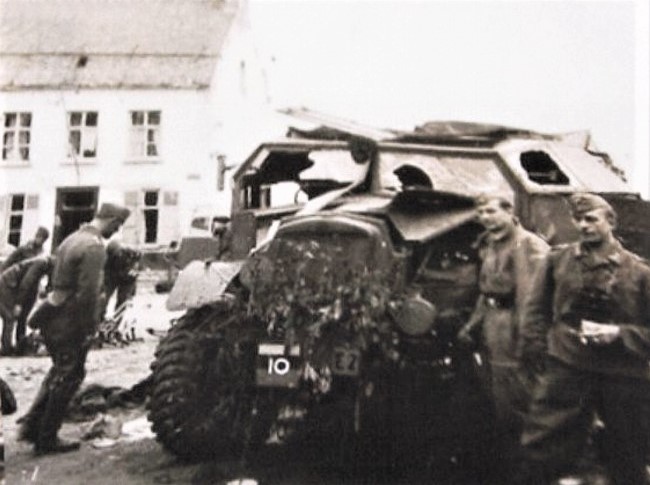 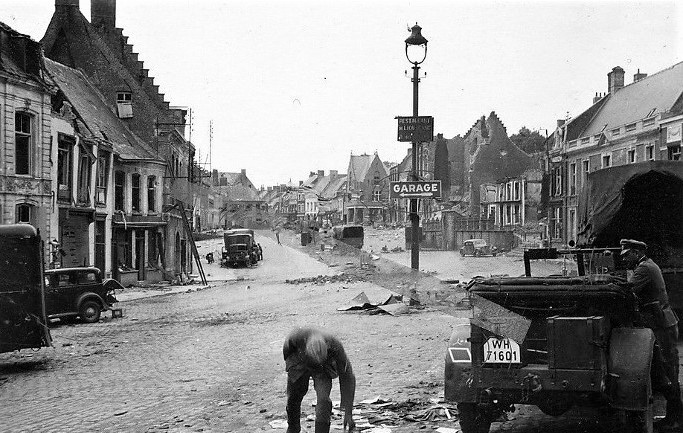 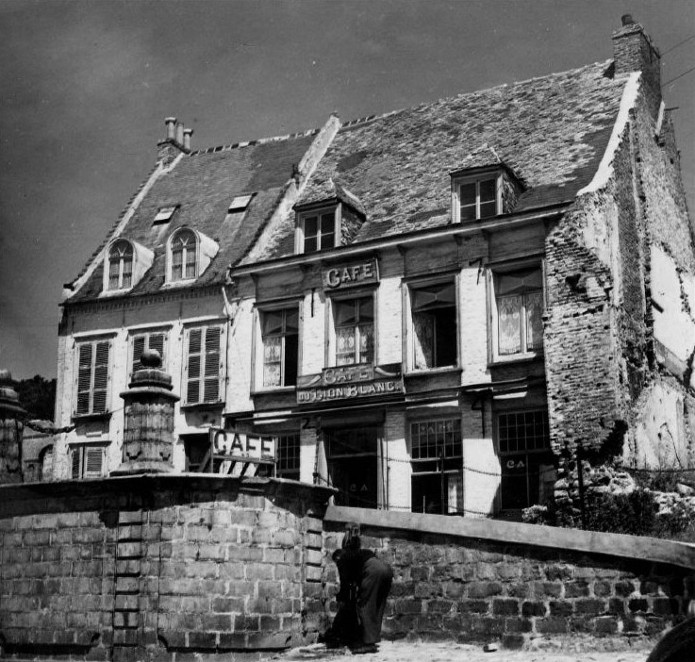 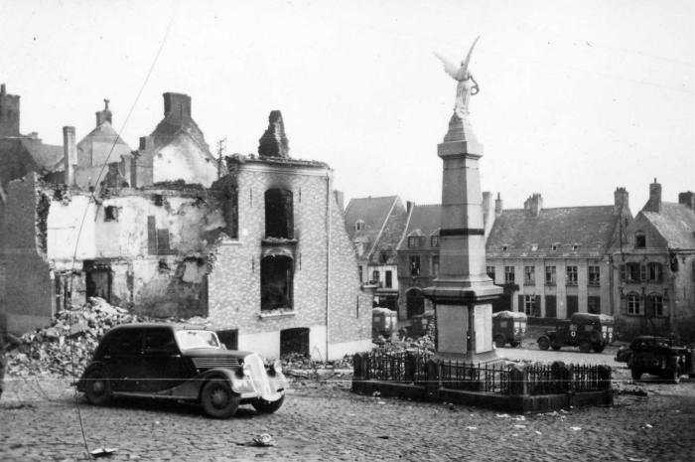 Looking down towards Grand Place, Cassel 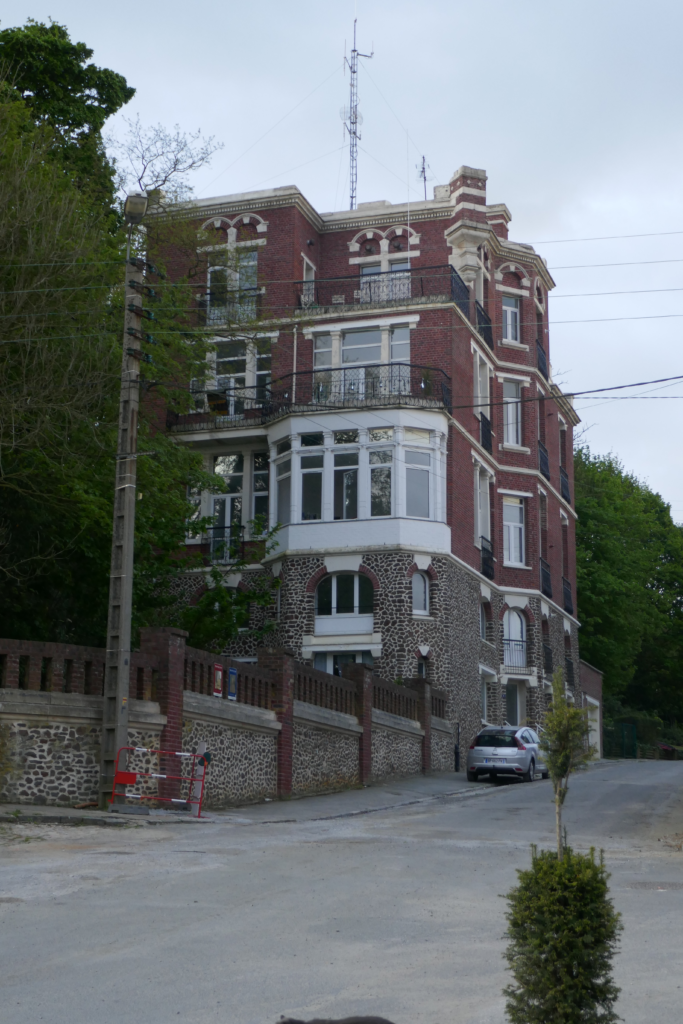 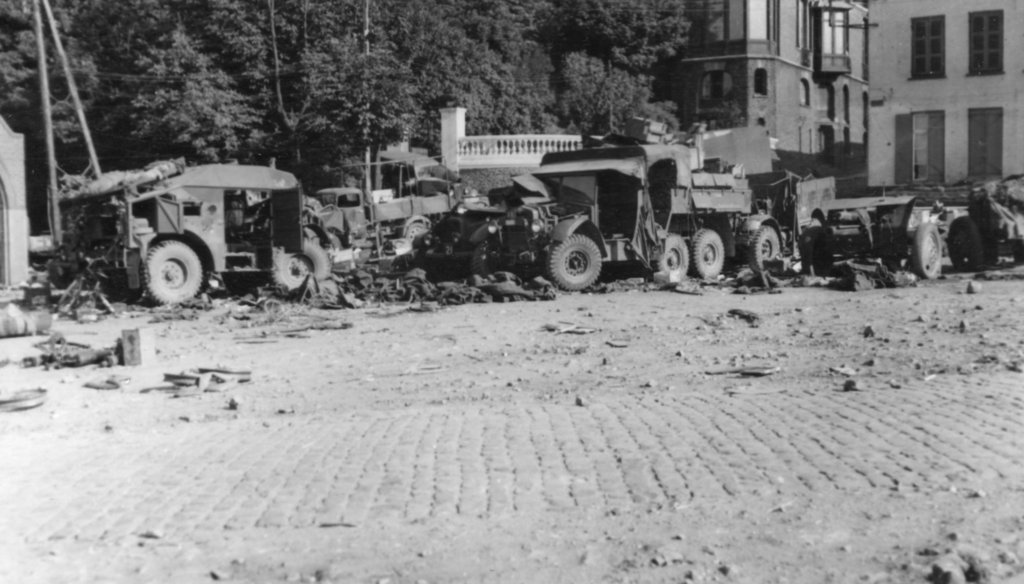 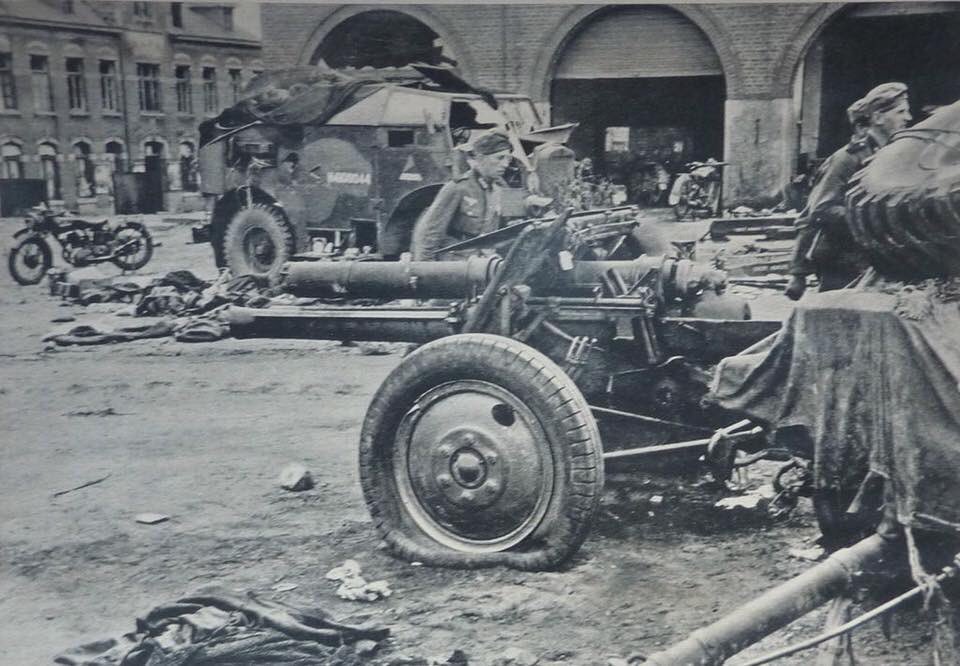 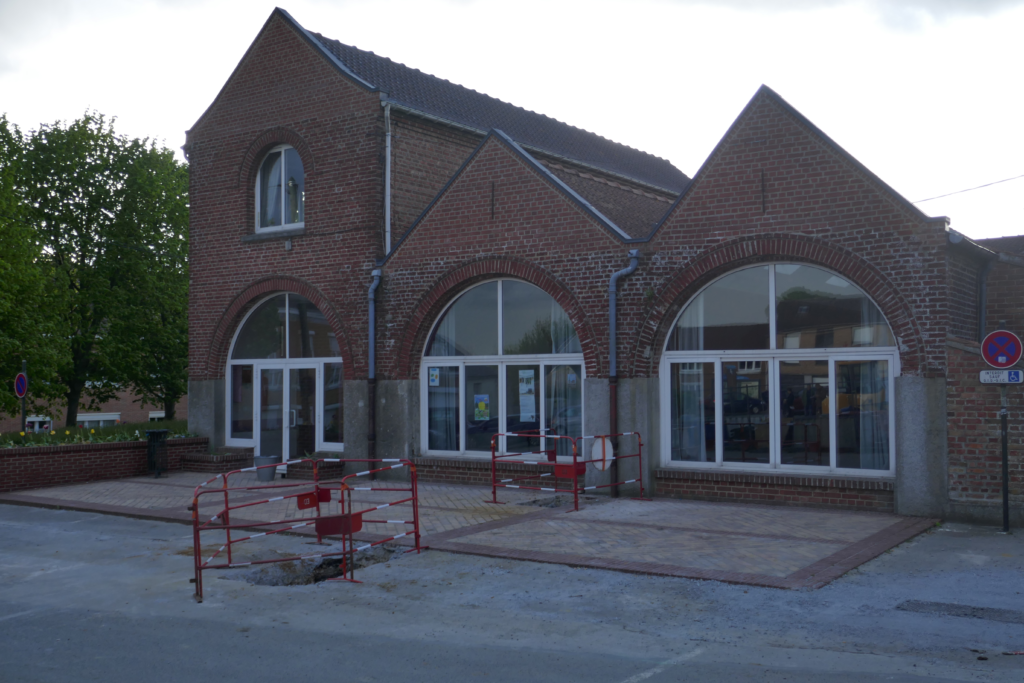 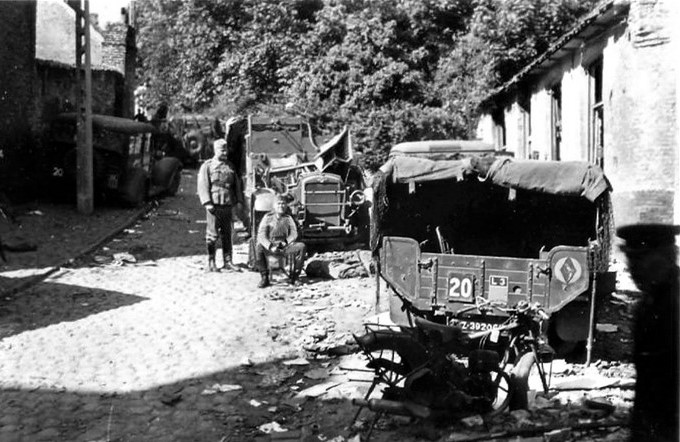 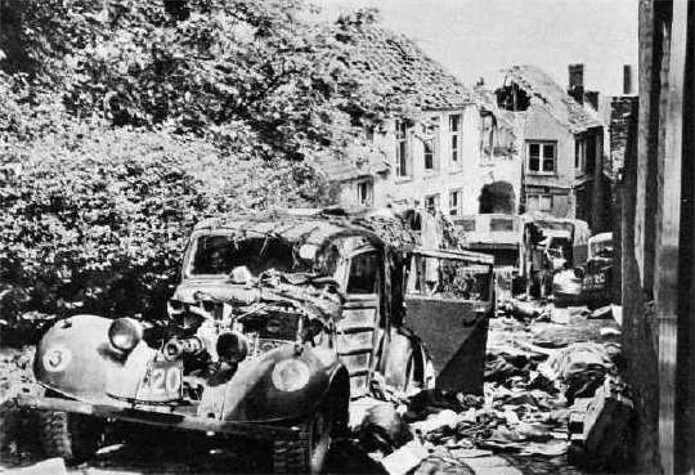 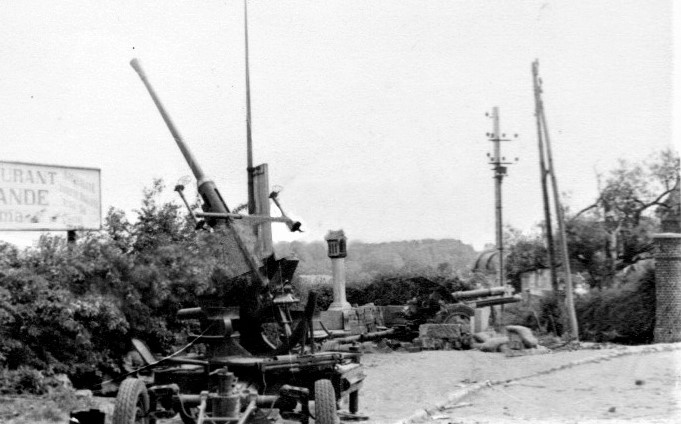 Dead Horse Corner, Cassel with an anti-aircraft gun in the foreground and a 140 Regiment 18-pounder in the background

British Prisoners of War and RAMC staff captured at Cassel in 1940.  We are flying a Royal Artillery flag at Chateau Masson in 2019.  Although the right-hand 1940 image may have been taken in the grounds of the Chateau, it’s also possible it was taken at an assembly point for POWs at Zuytpeene.  B&W photograph courtesy of Guided Battlefield Tours Ltd.

The Liberation of Cassel, 1944

Four years after it’s occupation, Cassel was liberated by advancing Polish Sherman tank troops heading from St Omer under the command of General Maczek on 6th September 1944.  The Germans had fled the city and the liberation was unopposed.

Cassel’s houses were covered with Allied flags . There were several spontaneous ceremonies in the Grand Place, at the foot of the War Memorial and the statue of Marshal Foch. The Polish forces crossed Cassel to head towards the Belgian border which they reached the same afternoon.  A few days later, they were  replaced by soldiers from the Czech brigade who installed a depot for armored vehicles on Plummer Square. 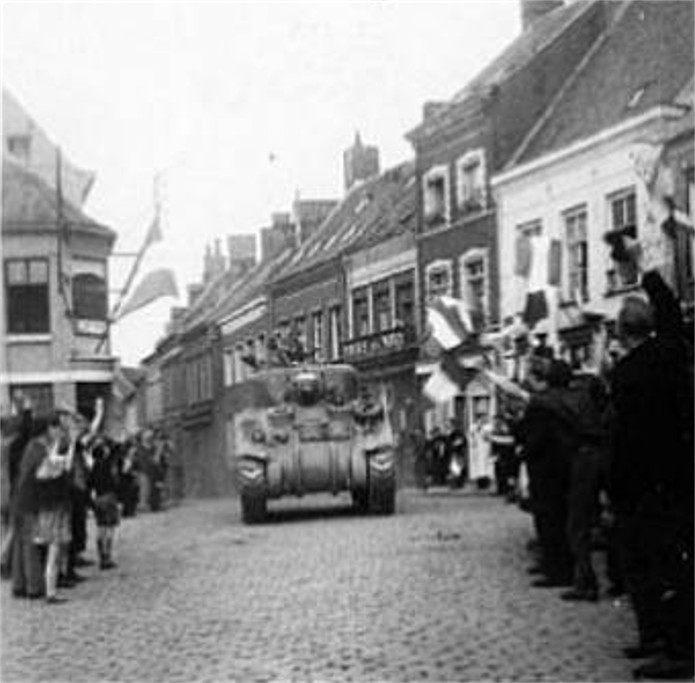