Requisitioned school halls and church buildings were used for initial training at the Clapham and Woolwich bases.

From 19th September 1939, the Regiment transferred to a training base at Totteridge, near Barnet, North London) and finally, in November 1939 and prior to deployment in France, the Regiment moved to Dursley, Gloucestershire to join 3rd Corps, BEF. 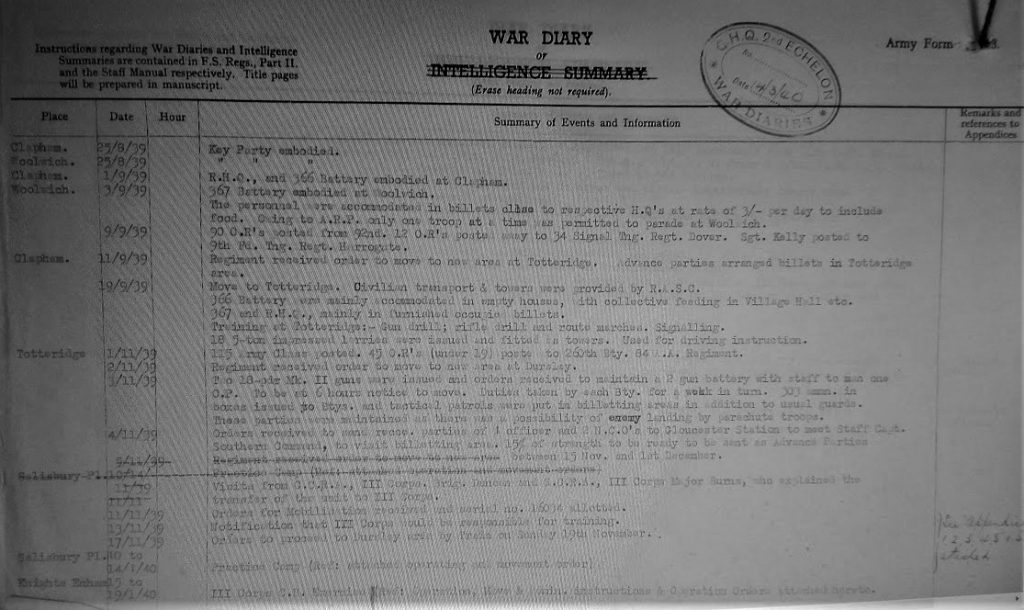 The Cotswolds terrain was considered suitable for large-scale artillery manoeuvres, and other RA regiments were posted nearby, including the 5th Royal Horse Artillery Unit (RHA) that fought alongside 367 Battery at Cassel and the Lewisham-based 139 Regiment, RA.  The enlisted men were housed at the Champion carpet factory, a disused factory complex with an adjacent Drill hall in Boulters Lane.  Dursley was also used in 1943-44 as a base for American forces prior to D-Day. 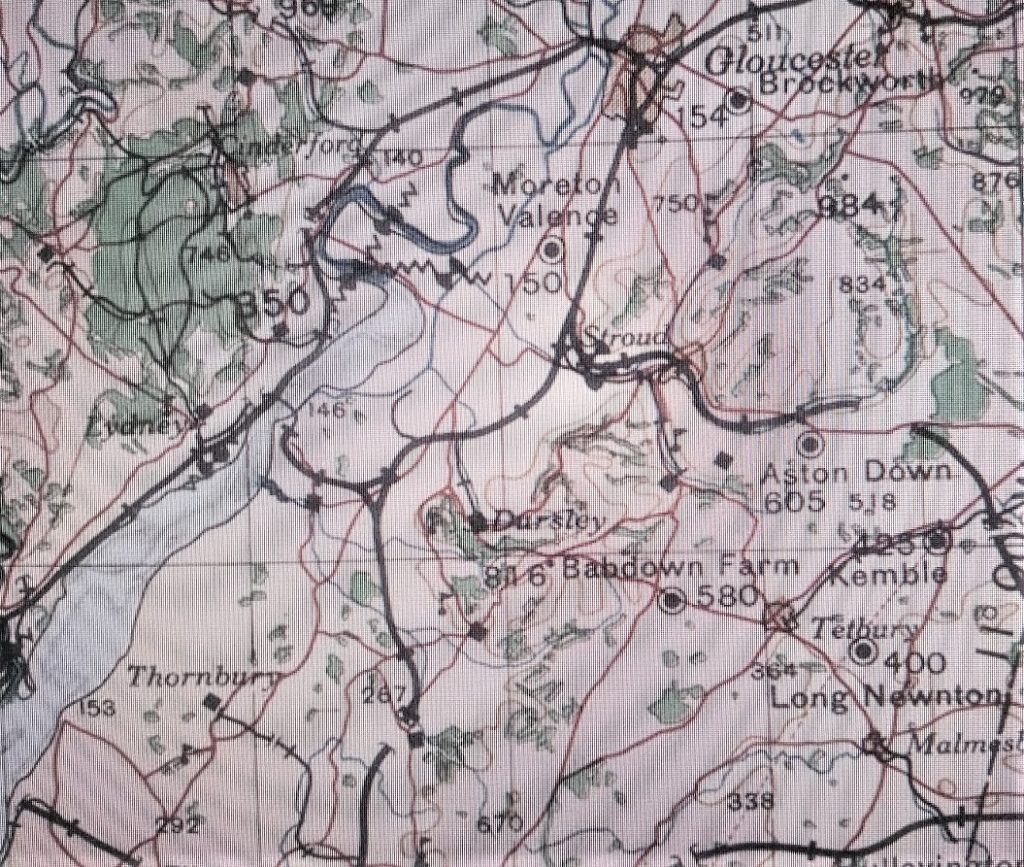 The winter of 1939-40 was severe, and the Regiment had trouble with transport due to snow and ice on the steep Cotswold hills. Icing was so severe that telephone lines were brought down, hampering communication. 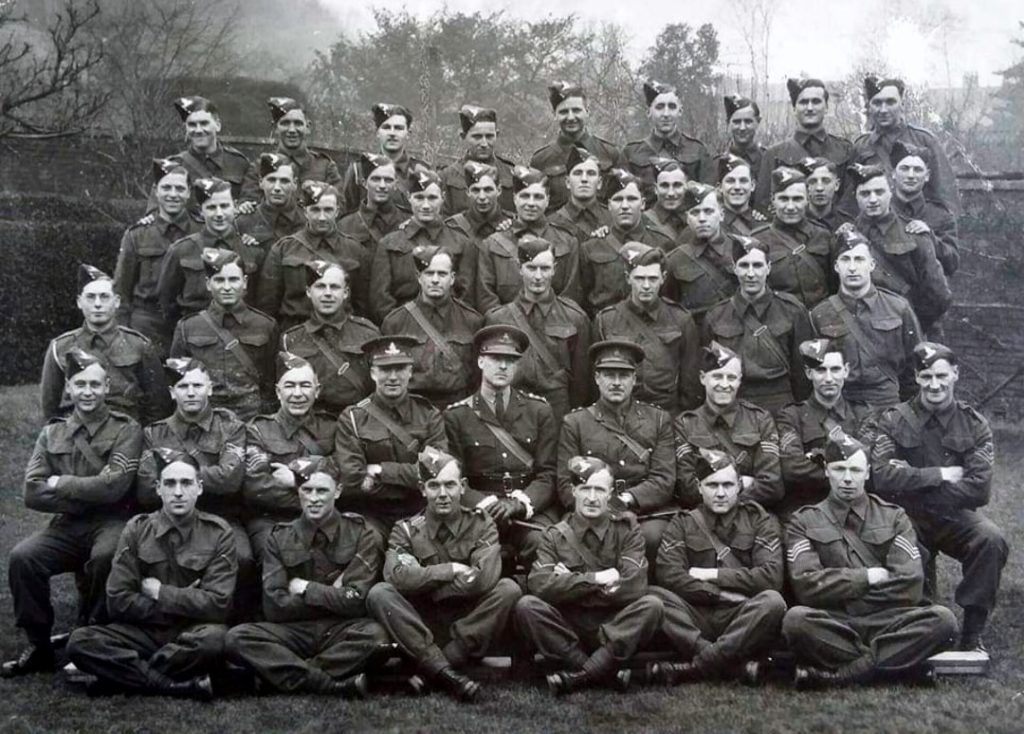 This picture was taken in late December 1939. The group consists of nearly all T.A. men. Reservists and Militia men joined the Battery in December 1939-January 1940 and none of them appear in the photograph.

The site of the Champions Factory in Boulton Lane, Dursley, now demolished and replaced by a housing complex known as Champions Court. The old Drill hall was also demolished, it was in the allotment gardens in the foreground to the left in this image. 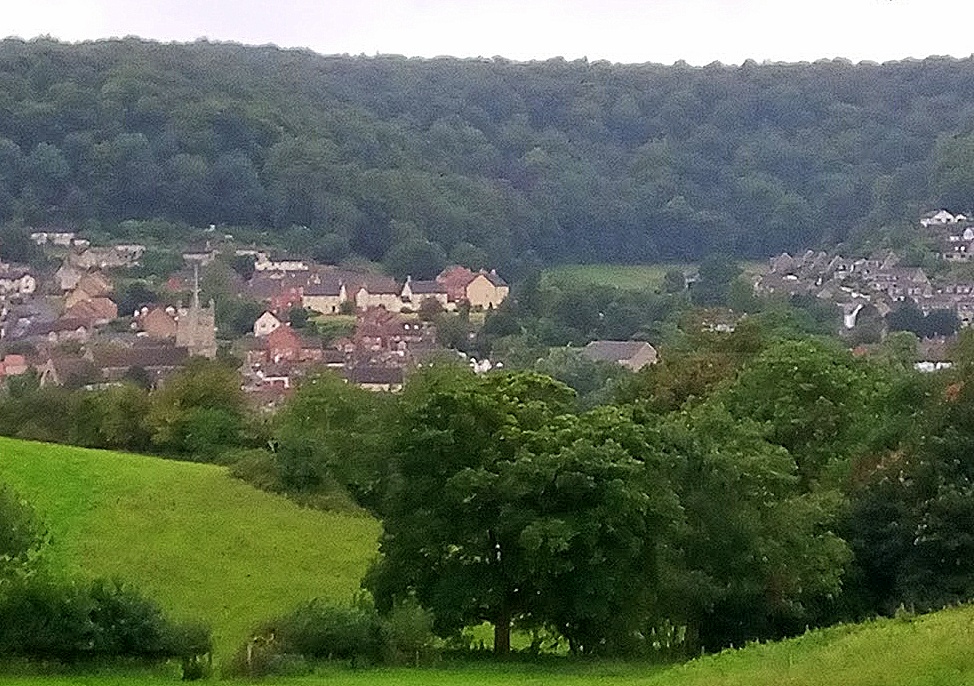 The Regiment’s recruits spent their first Christmas away from home at Dursley and celebrated with a tree inside one of the warehouses, presents, crackers, cigarettes and beer. On Boxing Day 1939, Major Brooks was presented with Alice, a goose with a fondness for alcohol.  Alice was adopted as a mascot and accompanied the Regiment to France smuggled in a gun tractor, but unfortunately went missing in Bolbec, never to return- a source of great sadness to the men. 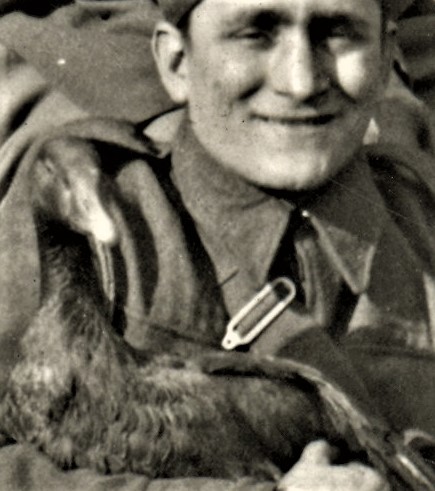 ‘Alice’ the goose in the arms of Gunner Tilston

Another Regimental mascot, a dog named Nan that belonged to the Regiment’s Quartermaster, died of pneumonia in France. 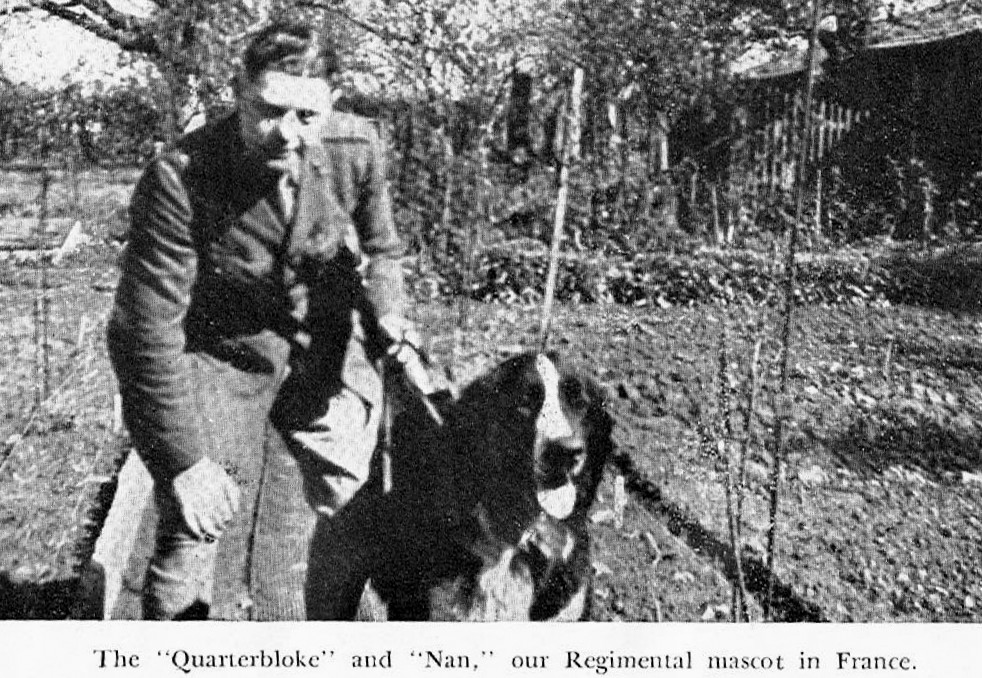 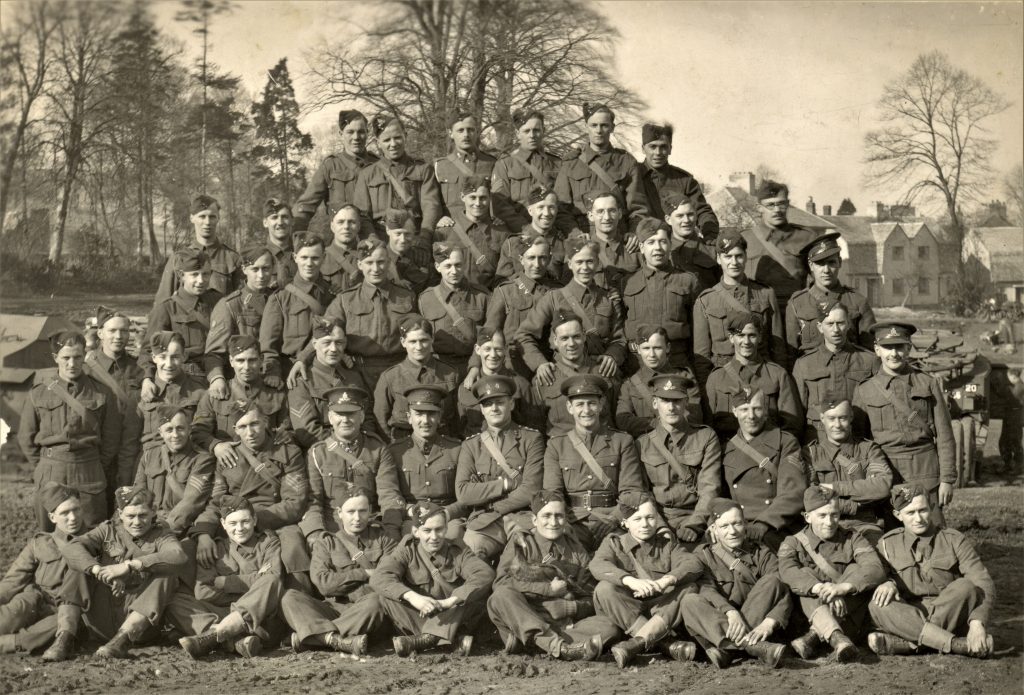 366 Battery at Dursley, 1940. Taken at the Rangers House estate with the houses of Cambridge Avenue in the background. Rangers House was demolished in 1973, but the houses visible in this image still stand.  ‘Alice’ the Goose is being held by the sixth soldier from the right, front row.

With thanks to Martin Felstead 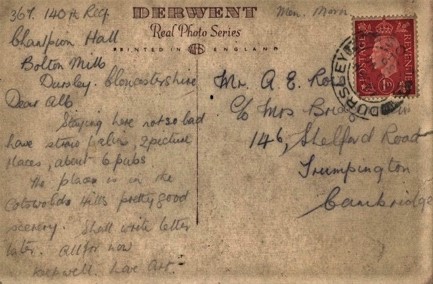 Postcard from Bombardier Arthur Ross to his brother Albert, who at the time was studying at Cambridge University. It reads:

On the 10th February 1940, the Regiment (along with four other R.A. Regiments in training nearby) was inspected on an icy cold day by King George VIth. The men were lined up to greet the Royal party on the A4135 main road towards Tetbury.

During that inspection, Serjeant Johnson of 366 Battery was singled out by Queen Elizabeth because of his unusual Mercantile Marine medal from the Great War. 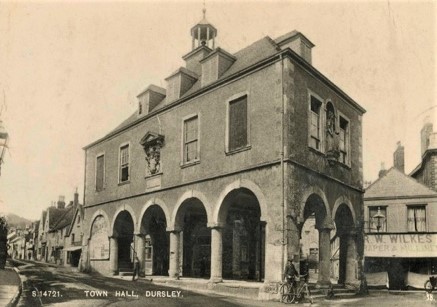 Dursley Town Hall, site of the visit of HM King George in February 1940

The Regiment received secret orders to leave Dursley and to join the British Expeditionary Force in France on 2nd March 1940.  The War Diary describes the logistics of the journey from Southampton to Le Havre on board the ‘City of Florence’ and ‘Ben Macrae‘.  Nearly two hundred vehicles were used: – 3-ton lorries, 30-cwt lorries, 8 and 15-cwt trucks, gun tractors (delivered to Dursley by ATS female volunteers) armoured carriers, ammunition, machine guns and other equipment- all camouflage-painted with 140th Regiment identification logos (the Figure ’10’).  The column was described as an ‘inspiring sight‘, nearly six miles long. 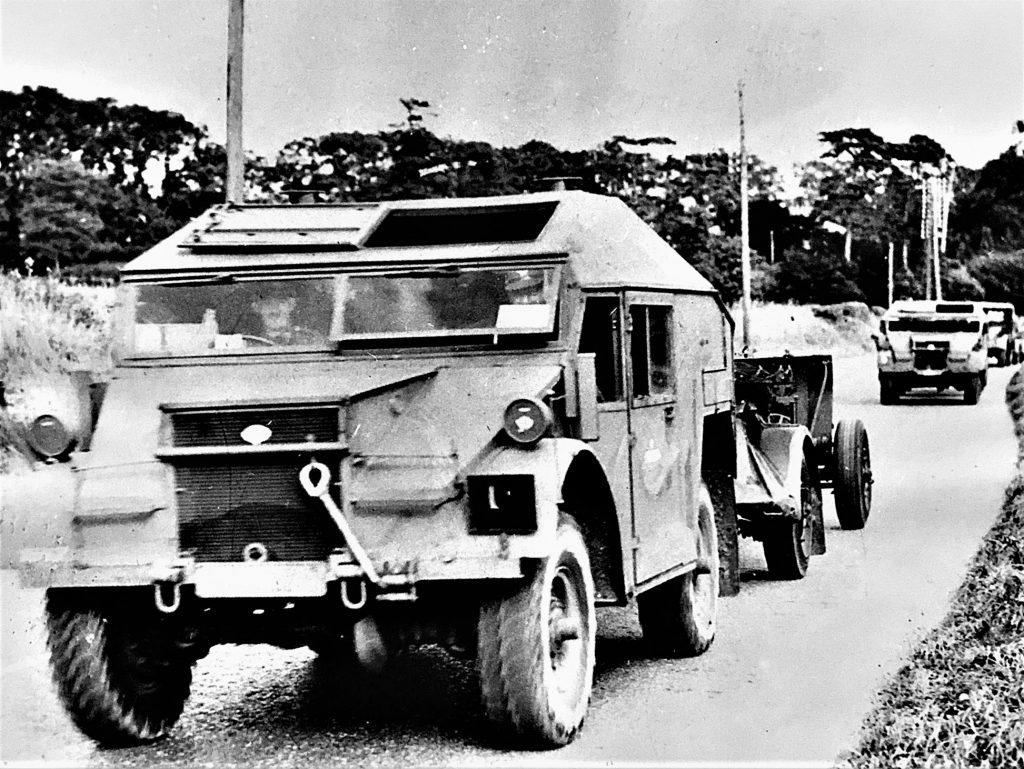 A BEF artillery Regiment in convoy in England in 1939

Unfortunately for the 139 (4th London) Field Regiment, which was also stationed in Gloucestershire, much of their equipment had to be requisitioned and repainted in 140 Regiment logos.

Excerpt from 139 Regimental War Diary recording the transfer of equipment prior to 140 Rgt.’s relocation to France. Courtesy of  ‘Packrat’ WW2talk.

A week later on the 8th March, the rest of the Regiment’s Officers left Dursley by train, waved off by their loved ones.  Although ‘Grand Party’ describes their pride it also mentions a sense of foreboding that they may not see their men again, ‘as alas it proved’.

On arrival in France, the junior ranks were billeted at the Normandy town of Bolbec.  The War diary records periods of preparation and training in Northern France during the months of March, April and early May 1940 that comprised part of the ‘Phoney War‘.  There are accounts of extensive military and firing exercises taking place virtually every week, although care seems to have been taken not to damage French civilian property, upon which there is much emphasis.

Despite the lessons learnt during the final months of World War One, when the British Imperial Army had learnt to break the deadlock of trench warfare by combining artillery with infantry, tanks and air support, there is little evidence within the War Diary that the Regiment was so co-ordinated.  The only liaison with the RAF were a few joint exercises using slow-flying and unarmed Lysanders as spotter planes.  Lt Col Brooks laments this lack of air co-ordination at some length in his analysis of the British defeat in ‘Grand Party‘. 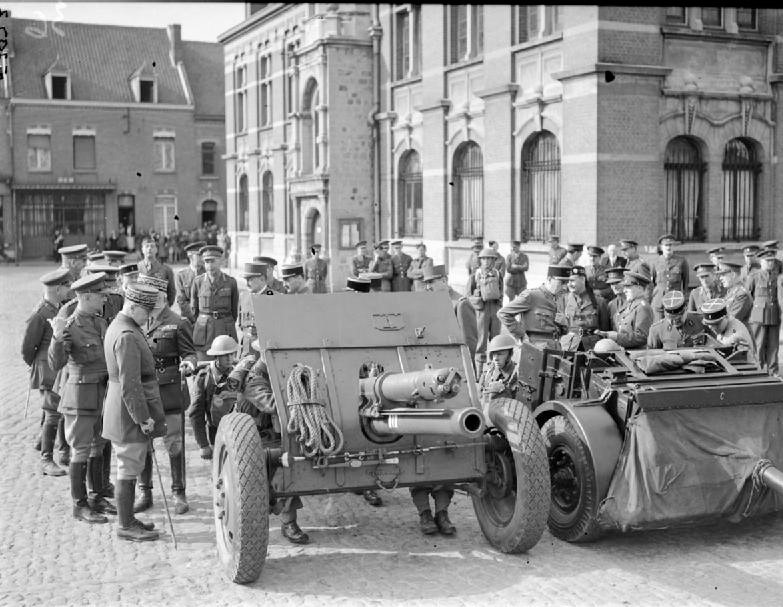 Although the German attack was predicted to be through Belgium, that country’s neutrality meant that no reconnaissance into Belgium was permitted, and so most of the training and familiarity with landscape had to take place across the plains of Northern France.

As the imminent German attack drew nearer the Regiment was moved closer to the Belgian border, south of Lille.  HQ staff and 367 Battery were billeted at Orchy, 366 Battery were at La Visterie near Nomain.  The farmhouse on the Rue de Visterie featured in Grand Party stands virtually unaltered to this day. 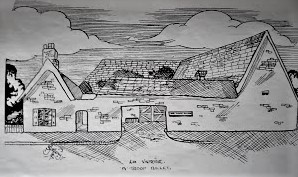 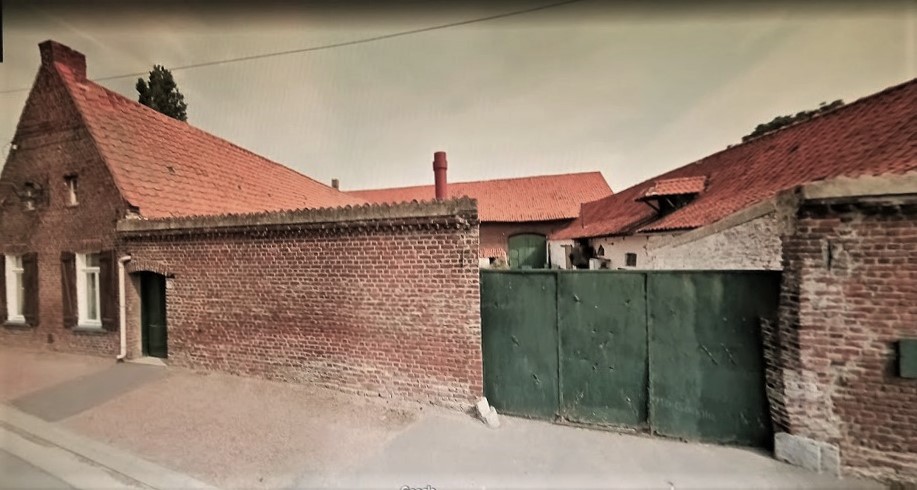 The Regiment remained in this state of operational readiness and training in France until Belgium’s neutrality was voided by the German invasion on 10th May 1940. 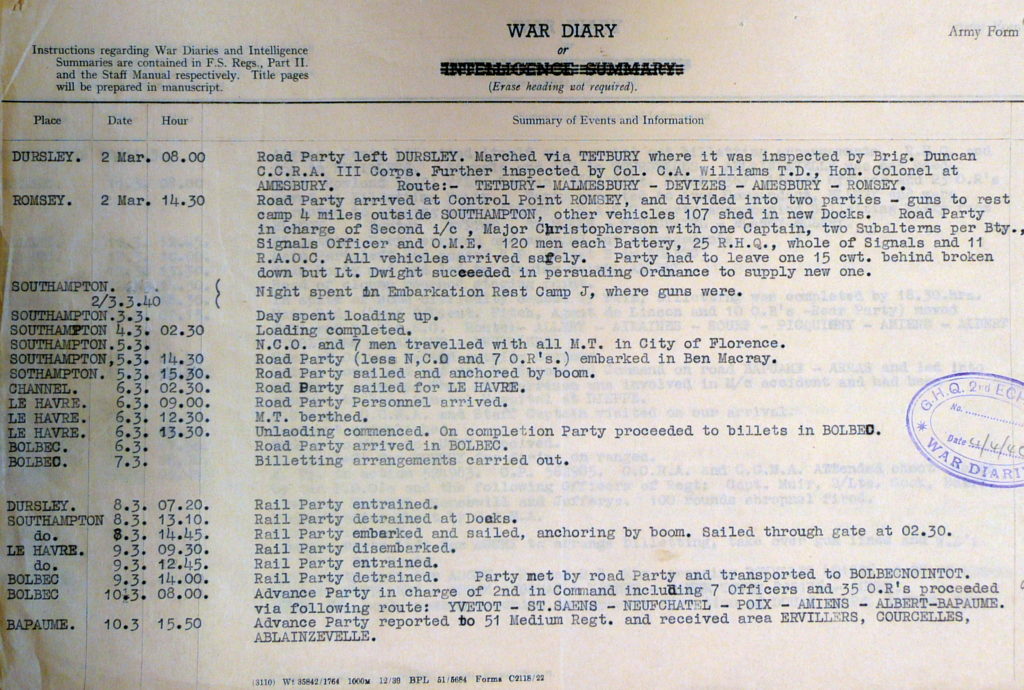 The War Diary outlining the embarkation at Southampton on the 2-3rd March 1940, the cross-channel crossing in City of Florence and Ben McCray and the Regiment’s arrival at Le Havre and Bolbec. 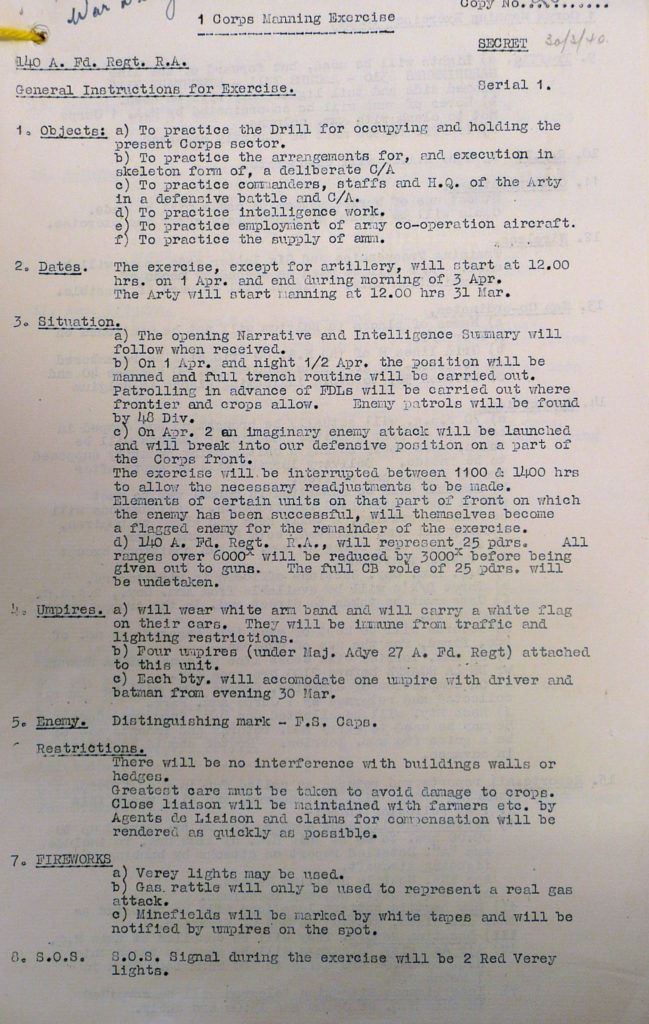 War diary dated 20th March 1940, documenting ‘General Instructions for Exercise’.  Note list of restrictions including: ‘greatest care must be taken to avoid damage to crops’ and ‘claims for compensation will be rendered as quickly as possible’.