Defence of the Western Corridor

As the German Army closed in from the West, the British and French line of defence ran along the series of canals running North-South from Gravelines on the coast to La Bassee, 40 miles to the South.

Behind this line lay a number of defended strong-points, including Hazebrouck, Cassel and Wormhoudt.  Hazebrouck was known to be a German objective and to the South of the town lay the Nieppe Forest.  The forest was defended by three battalions of the Royal West Kent Regiment and a battalion of the Royal Sussex Regiment.

British and French units were strung out thinly along the canal line, facing German forces which included ten German Panzer divisions.  The defenders gained some respite on 23rd May, when Hitler’s Halt Order forbade these divisions to cross the canal, although German infantry gained a number of bridgeheads on the allied side.

The Halt Order was lifted on the night on 26th May and the following morning German forces began major attacks all along the canal line.  By 28th May Panzer units were over the canal and pushing East in several places, with heavy attacks on Hazebrouck and the Nieppe Forest.

On 23rd May, 367 Battery and Regimental HQ of 140th Regiment under the command of Lt-Colonel C.J. Odling received an order to join the ‘Macforce’, commanded by Major General Noel-MacFarlane.  Macforce was one of a number of ad-hoc forces put together by Lord Gort as he attempted to stem the German advance and act as a rear-guard for his escaping troops. 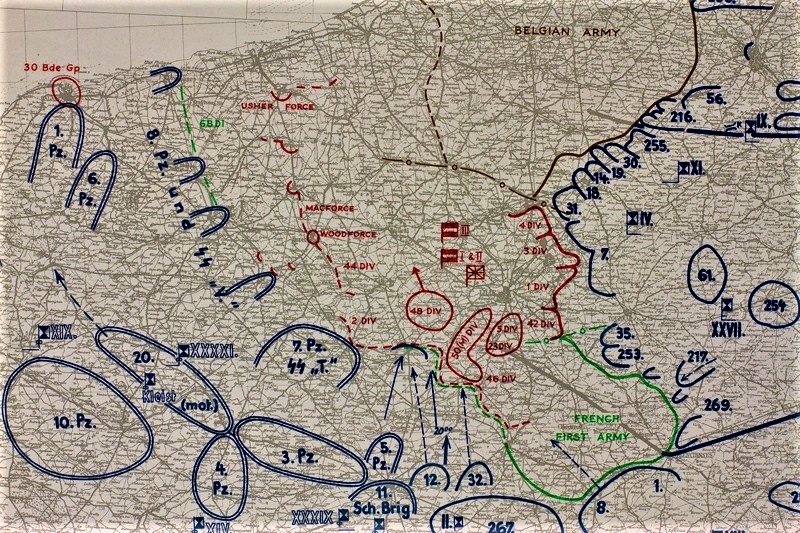 British military position 23rd May 1940, showing the German threat to the ‘escape corridor’ to Dunkirk and the position of Macforce near Merville. Advancing German forces are shown in blue; the BEF in red and the French and Belgian armies in green and brown respectively. 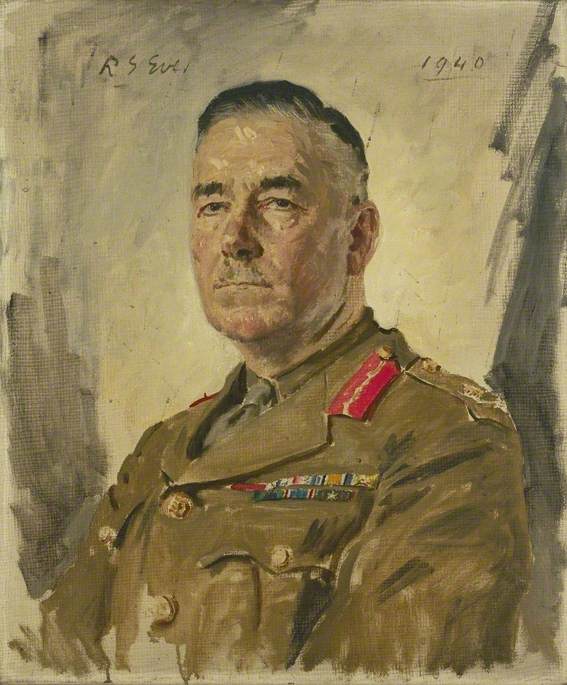 The War Diary describes the movement West from Sainghin-en-Melantois to join Macforce at the Nieppe Forest.  There is no clear map reference of the regiment’s location in the wood, but Major Christopherson describes carrying out a reconnaissance of the town of Merville on the D946 road to the South.  Merville is about 22 miles to the West of Lille. 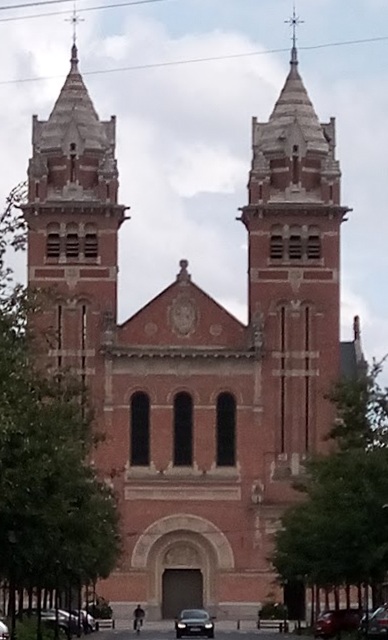 The Macforce was soon ordered North to form a defence around Cassel and the 140th Regiment moved to Cassel, via Caestre, on 24th May.  The regiment’s association with Macforce was brief as, on the arrival of Brigadier Nigel Somerset’s ‘Somerforce‘ at Cassel on 25th May,  the Macforce was disbanded; its original purpose had been to protect the BEF’s southern flank in the event of a collapse of the French First Army, but as such a collapse hadn’t occurred, the Macforce’s raison d’etre had ceased.

‘Late in the afternoon Regimental H.Q. and 367 Battery were ordered to join MACFORCE. 367 Battery was chosen because it had 11 guns in action and 366 Battery had only 9 guns and their position was better than 367 Battery. At 19.30 hrs. I led the Regiment and the Colonel left for ORCHIES  to report to Gen. MASON MACFARLANE. R.H.Q. and 367 Battery marched through LILLE – ARMENTIERS (luckily we were not bombed), and arrived at FORET DE NIEPPE at 23.00 hrs.’

‘The Colonel [C.J. Odling] re-joined the Regiment at FORET DE NIEPPE at 03.00 hrs. The Battery was told to rendezvous in a small wood which was found to be a hopeless place and the Battery did not stay there but returned to the FORET DE NIEPPE. At about 06.00 hrs. the Commanding Officer and myself went off to recce. a position near MERVILLE and at about 09.00 hrs we were ordered to join an advanced guard and march through CAESTRE to CASSEL with a view to seizing the town before the enemy could reach it.

I do not know where the other Troop was. Lt. Col. A.A.M. Durand, M.C. commanded the two Field Regiments. As far as I can recollect the zones allotted to the Troops were North Troop from about 270° Northwards and the two Southern Troops shared from 270° Southwards’.