Eric West’s younger brother Geoffrey enlisted as an officer cadet in the Royal Engineers in the later part of World War Two.  He was sent to India as World War Two was drawing to a close in July 1945 and between October 1945 and May 1946 he completed his military training in the Queen Victoria’s Own Madras Sappers & Miners, based in Bangalore. 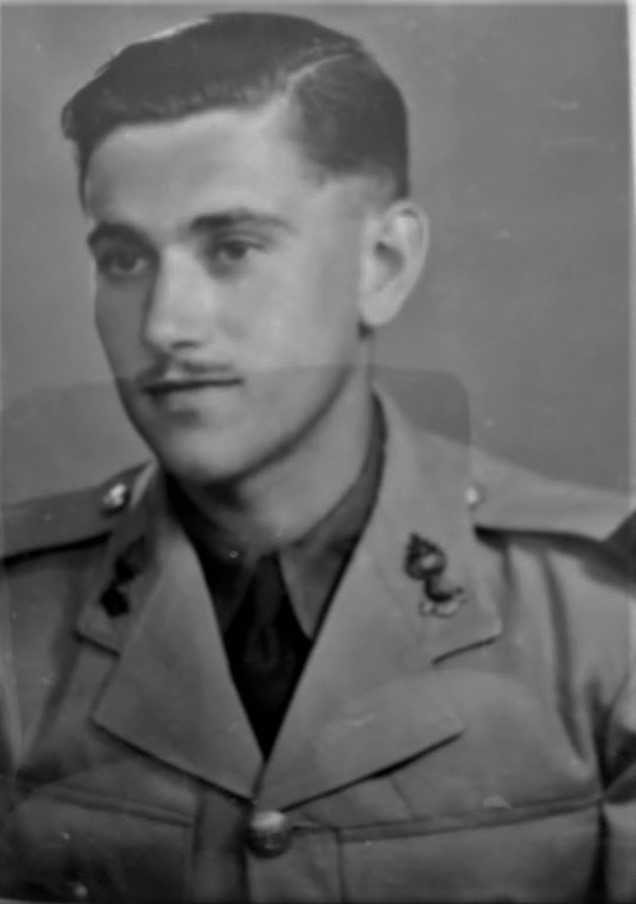 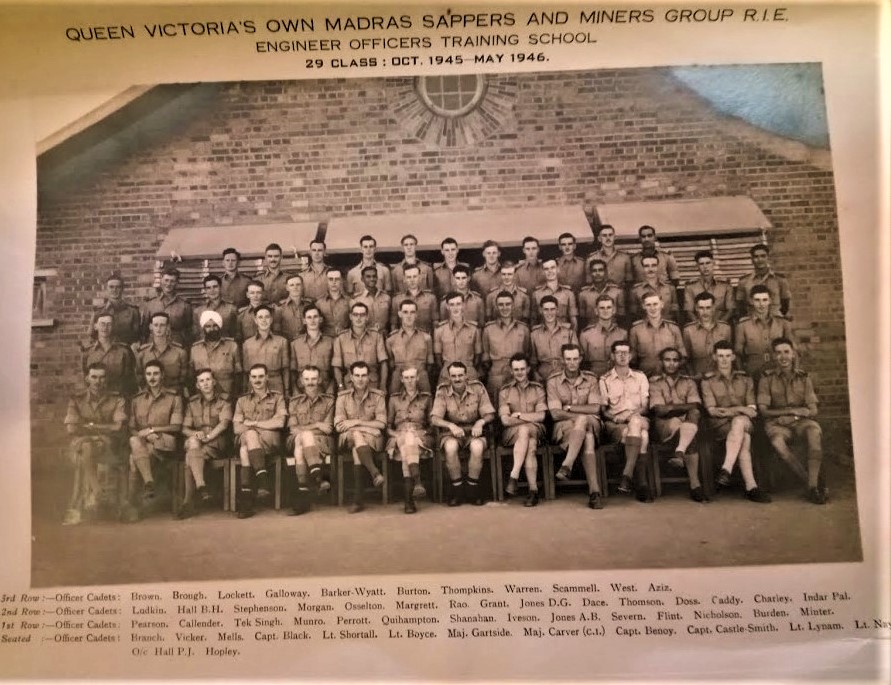 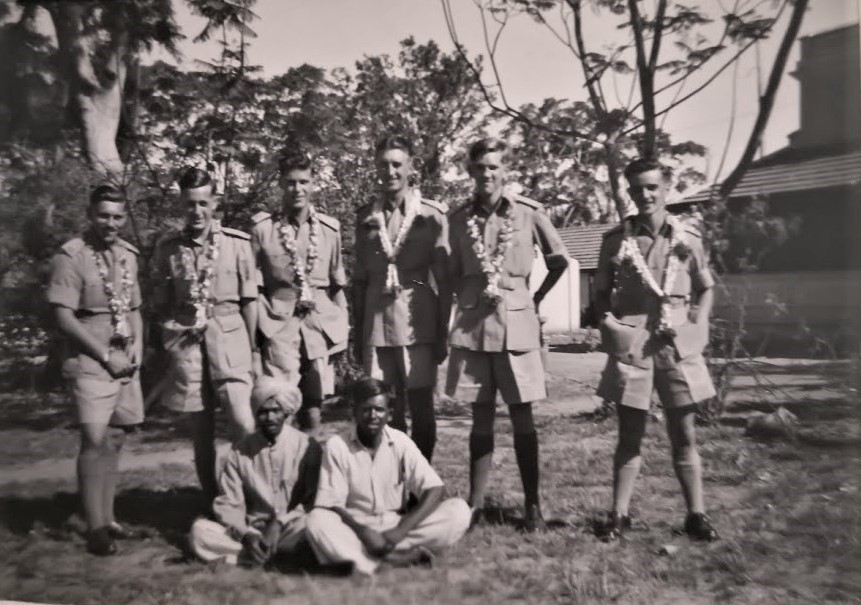 In June 1946, Geoffrey West sent his parents numerous letters and photographs of his time in Bangalore, Mysore and Ooty which include relaxed ‘off duty’ shots as well as Royal Engineer operations such as bridge building and road construction in the locality.  He was in Mysore during the Dasara celebration, presumably of 1945, which would have coincided with the announcement of VJ Day.

He also sent home many photos taken of repair work and steam train journeys on the Nilgiri Mountain Railway, a narrow gauge rack-and-pinion railway that connects the mainline from Madras at Coimbatore Junction to the colonial hill station town of Ooty.  The line was prone to landslide and monsoon damage and maintained at that time by Royal Engineers. 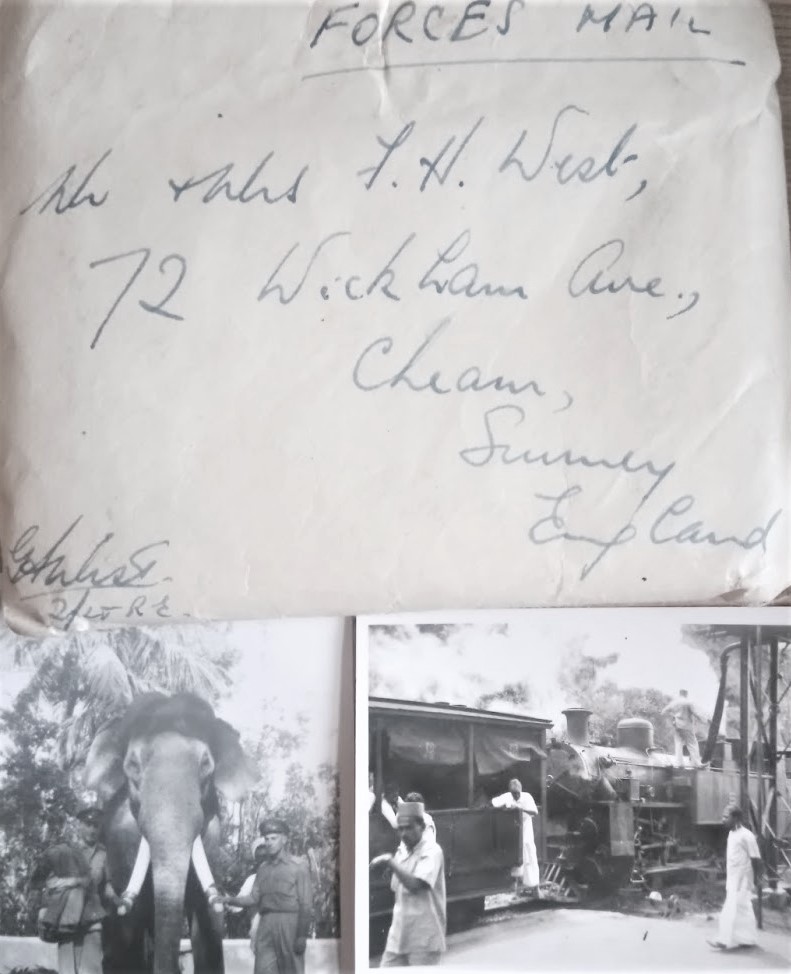 2nd Lt G.A. West (standing on the right) with the Mysore State Elephant. The steam locomotive ‘Sapper’ is on the right, on the Nilgiri Mountain Railway 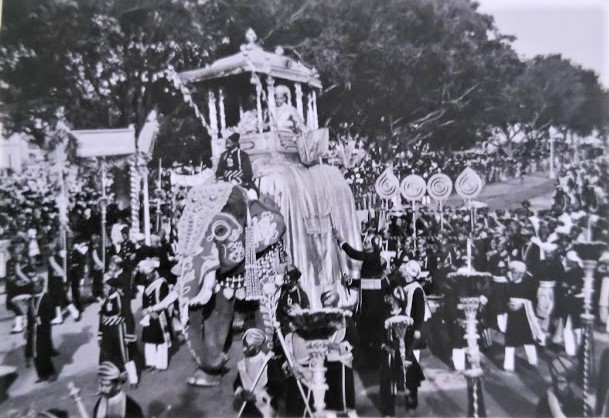 The same Mysore State Elephant during the Mysore Dasara Procession, taken by Geoff West in 1945 or 46 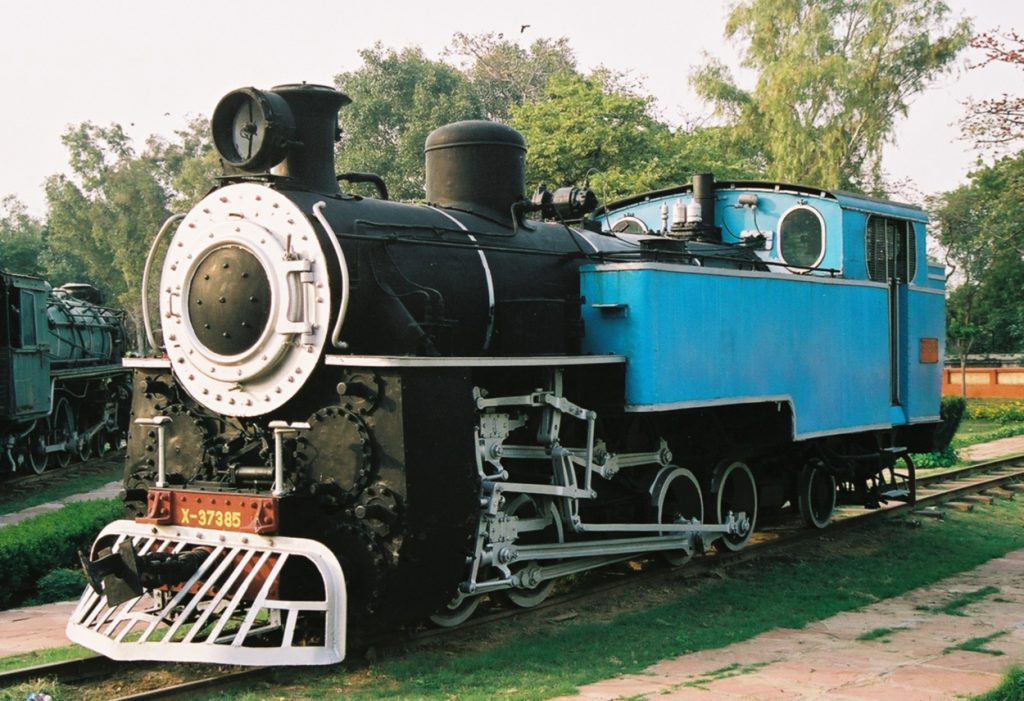 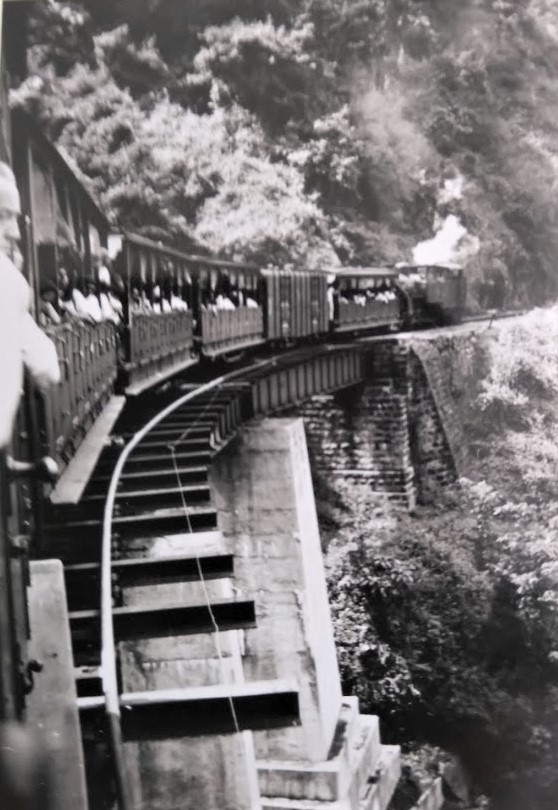 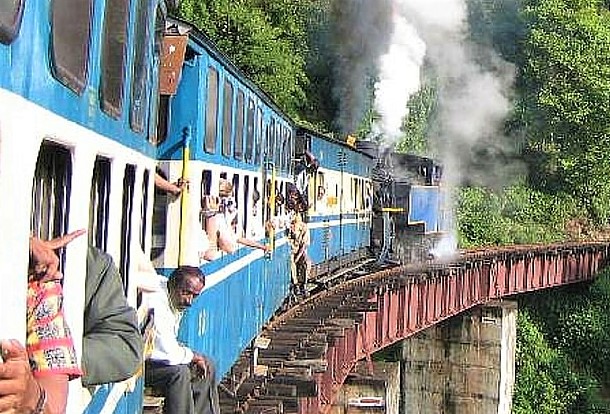 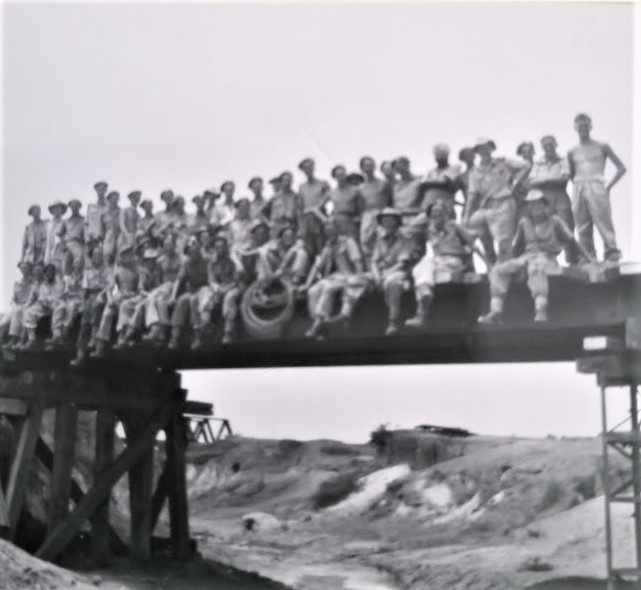 At Ooty, Geoff seemed quite happy and had made good friends including a Halford Severn, who later wrote to his parents, however, in July 1946 Geoff West was transferred to the town of Roorkee in Northern India.  The Sappers and Miners had an outpost at Roorkee, and the famous James Thomason School of Engineering was based there.

My uncle’s letters home from Roorkee changed dramatically and implied that he was becoming homesick. He described a nightmarish 1,500 mile journey northwards through the oppressive heat of an Indian summer and the tone of his letters  suggested he was suffering a rapid decline in mental health.  He found Rorkee dull by comparison with Bangalore, Mysore and Ooty and had been separated from, what appeared to be, firm friendships there.

By August 1946 he had developed an illness that would now be recognised as severe clinical depression.  He was taken to hospital in Lucknow and then on the 19th August 1946 transferred to the Military Hospital in Delhi. There, after an initial improvement, he committed suicide by self-inflicted injury on 24th September 1946 at the age of 22 years. 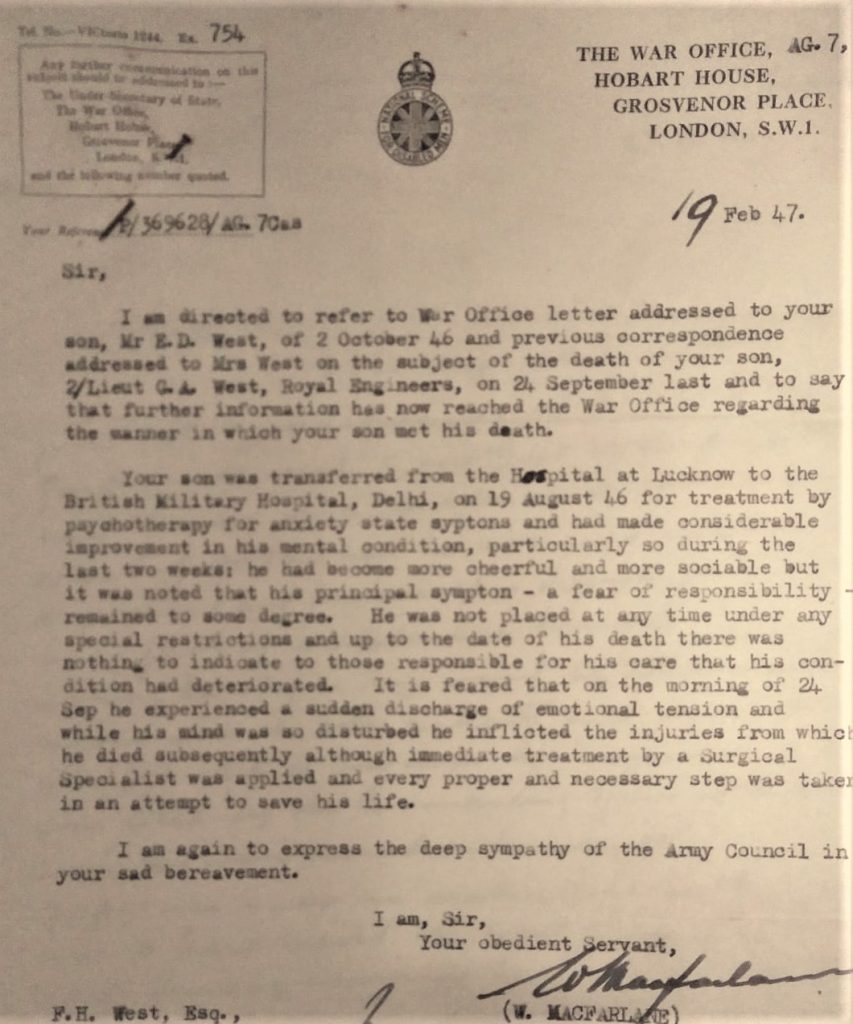 My father would have been confronted with this news just 15 months after his return from his own 5-year captivity.  My uncle Geoffrey’s suicide, like my father’s captivity, was never spoken about in our family.

2nd-Lt Geoffrey Arthur West is now buried in Delhi Commonwealth War Cemetery and I took these photographs on a visit to India in 2007. 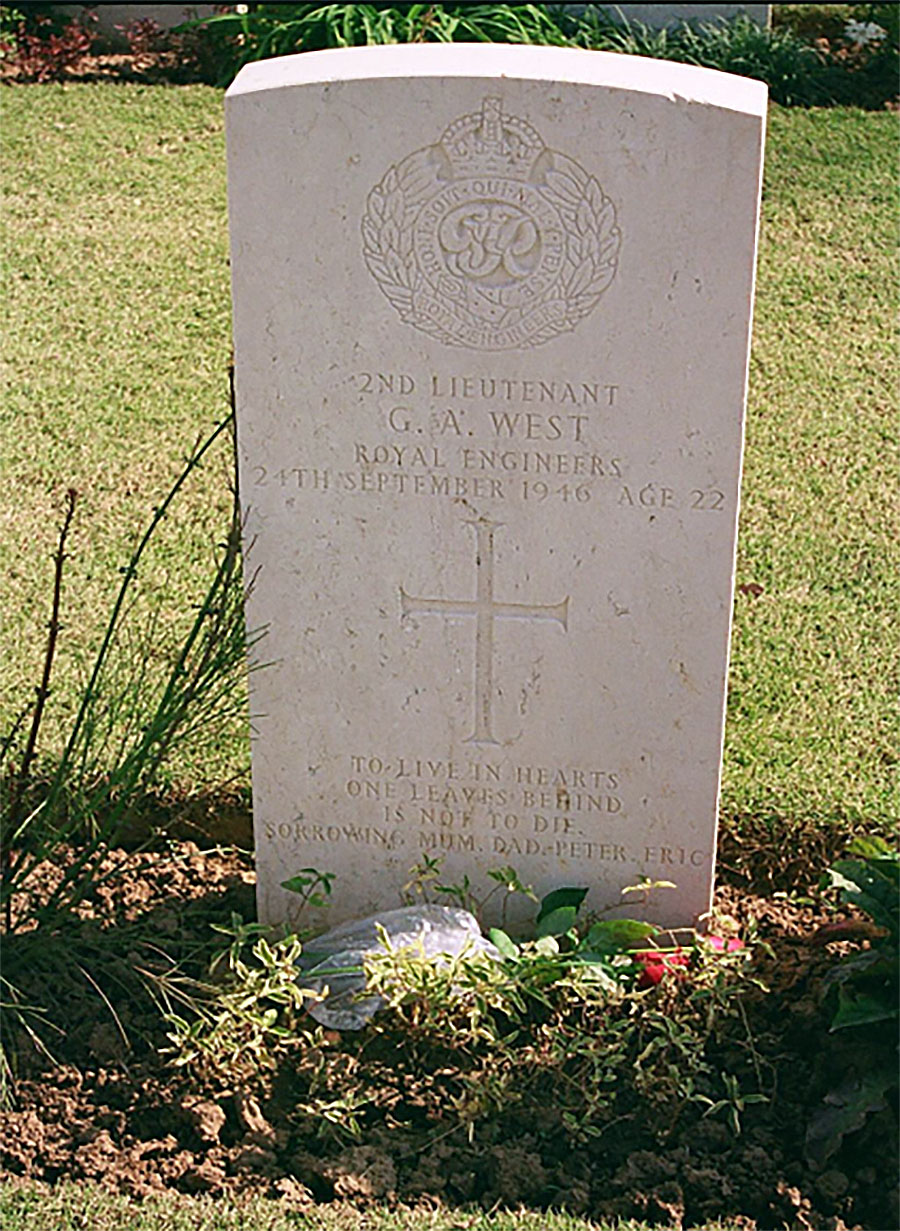 2nd Lt Geoffrey A. West- The inscription reads- ‘To Live in Hearts one Leaves Behind is not to Die. Sorrowing Mum, Dad, Peter, Eric’ 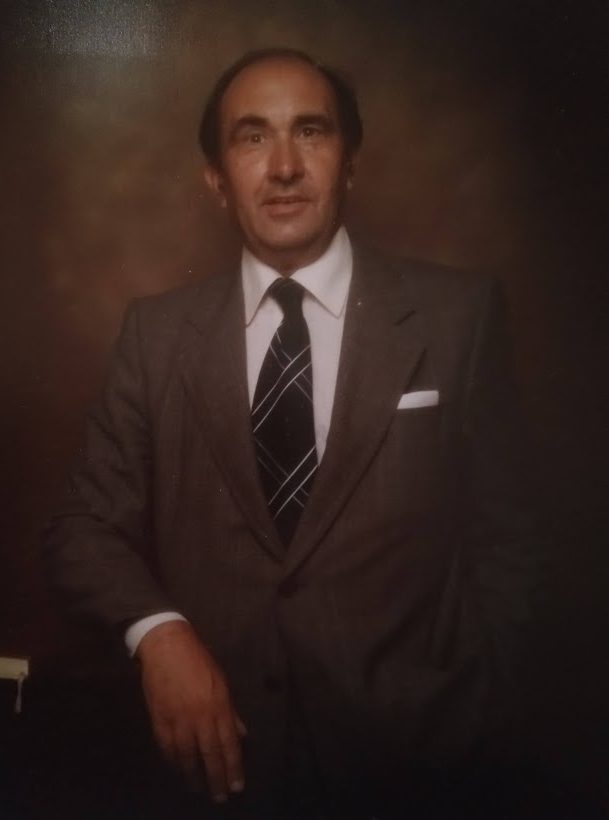 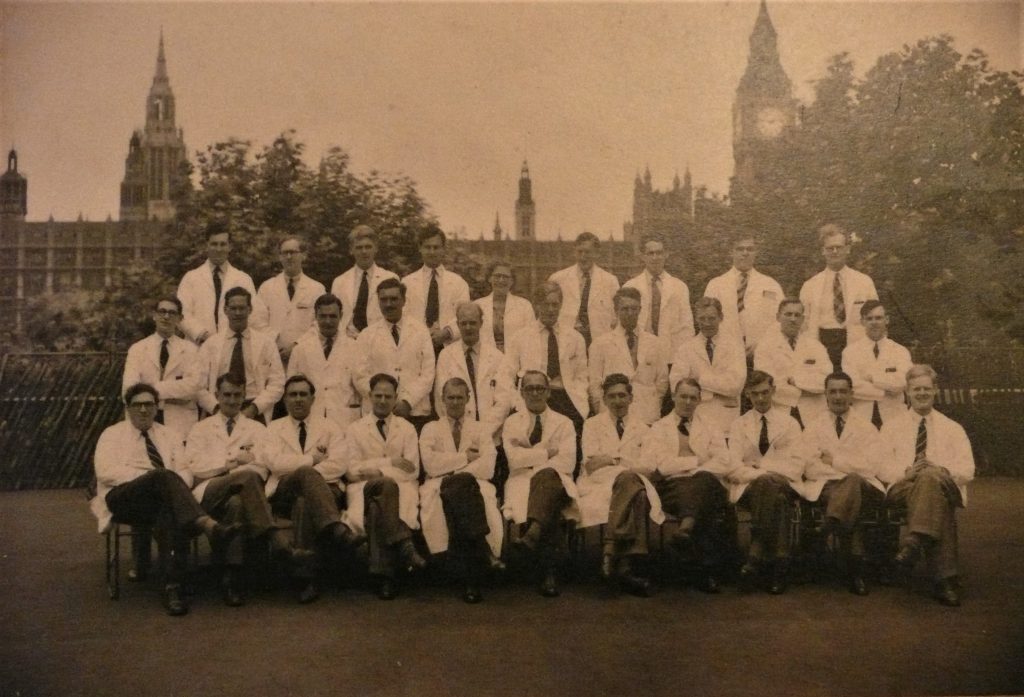 Dr Eric West became a Fellow of the Royal College of Physicians and after his death, at the age of 73 years, his College obituary was written by Dr H.R. Rollin.  The part of the obituary relevant to his wartime service reads:

‘Eric West’s route to the top of his chosen profession was unconventional. The son of a manager of a pipe factory in South London, he was the oldest of three brothers, the youngest of whom died on active service in India in 1945.  He was educated at local schools in the Surrey but before he could complete his studies to university entrance level he enlisted in the Royal Artillery.  In 1940, aged 21, he was a member of the ill-fated British Expeditionary Force and in the retreat to Dunkirk he had the misfortune to be captured by the Germans.

Typical of his intellectual prowess and his steely determination, West used his long years of captivity to the best possible advantage.  With what available facilities there were he studied German to such good effect that he was able to act as camp interpreter.  He made little mention of his POW experiences, but it was known among his colleagues that he had had a rough time, and that he had suffered physical maltreatment.  It was perhaps his own suffering, and that of his fellow prisoners, that prompted his interest in medicine in general and in psychiatry in particular.  He was liberated by the Americans in 1945.’ 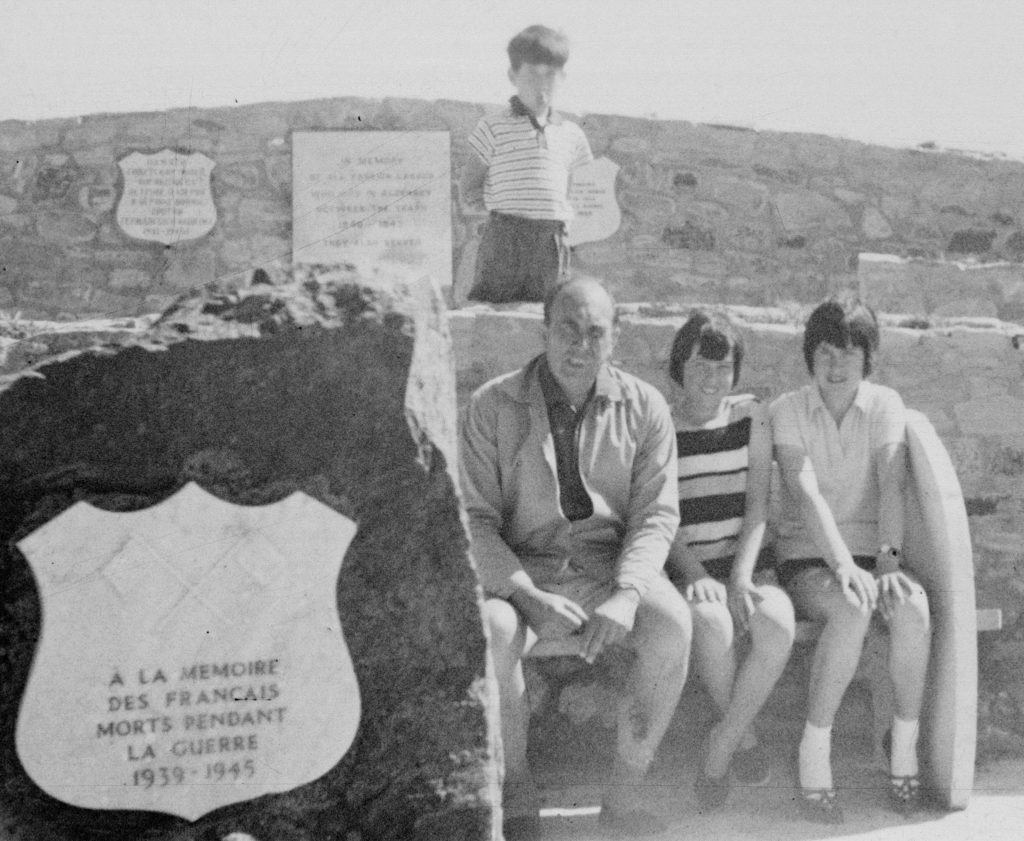 Staff Sergeant Eric West RA, RAOC with his three children, circa 1970, including the author of this website (standing).

Shortly before he died, Dr Eric West was honoured by his colleagues by the ‘Eric West Guest Lecture’ presented in September 1992 at the training course for Psychiatrists that he ran successfully for many years at the University of Surrey. The subject was ‘Mind, the Brain and the Law’.

Despite his deep understanding of the broken human mind, Eric West never spoke about his wartime experiences, or of his brother’s mental illness and suicide. He kept his thoughts to himself, although after his retirement in 1985 he felt he was at least ready to re-explore the battlefields near Dunkirk. Unfortunately, that visit never took place before illness supervened.