Cedric Jameson Odling was born in 1895 in New South Wales, Australia, the son of Herbert and Maud Odling.  Herbert Odling was a marble merchant, working at the time of Cedric’s birth in Australia for a business started in 1870 by his father, Anselm Odling.

Cedric Odling returned to England and was educated at Winchester College between 1909 and 1913 (in the same year as Major Nevill Christopherson). He was in the school’s shooting team in 1912 and 1913.

At the end of the Great War, the Odling family’s stone importing business expanded considerably.  By 1926 there were depots at London, Hull, Liverpool, Glasgow, Plymouth and Bristol.  In 1937 an additional depot was established in Dublin.  Anselm Odling & Sons became the largest employer in the worked marble industry in Carrara, Italy and, in 1932, Cedric Odling became chairman of the company.

In 1945 Cedric Odling resumed his chairmanship.  In 1958 the lease at the Liverpool Depot expired, and all plant and operations were moved to Hull. By the mid-1960’s, by then aged about 65 years, Cedric Odling expressed a wish to retire.  He had no immediate family to hand over to, but passed control to a cousin and the board of directors.  During this time, the UK saw a large rise in cremation, coupled with increased competition from the emerging markets of India and China.  All these factors had made it increasingly difficult to run the firm in its current guise. After Cedric Odling’s retirement, Anselm Odling & Sons was incorporated as Odlings Ltd and in 1967 the Bristol and Hull depots were sold to Bridgwater Bros Holdings Ltd., based in Surrey.

To this day, Odlings Ltd continue to manufacture and import memorials to the Monumental trade from its site in Hull.  The staff, almost entirely from Hull,  have specialist skills in design and artwork.  Although Odlings Ltd is no longer in the control of the Odling family, it has maintained its ethos as a family company.  Currently the Managing Director of Odlings is Duncan Reynolds, who is a grandson of Walter Bridgwater (founder of Bridgwaters).

Odling was a bachelor and had a passion for fine wines, cars and ski-ing.  In 1925, was a founder member of the ‘Downhill Only‘ ski club based in Wengen, and was remembered for driving across Europe in the pre-war days in a Rolls Royce or in his early model Bentley. 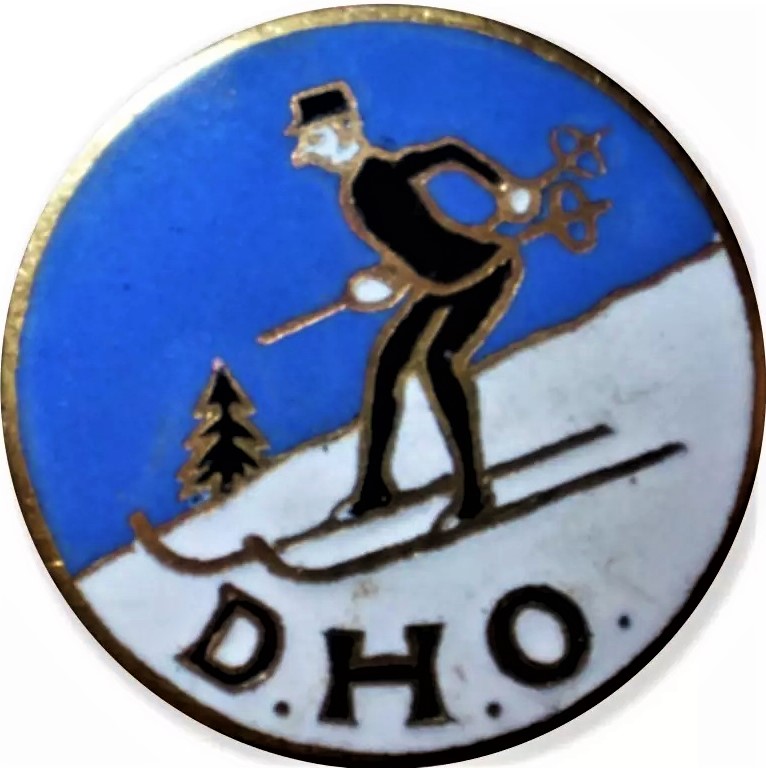 1930s Badge of the Downhill Only Club

Lt Col. Cedric Odling became President of the Downhill Only Club from 1945 until 1948, and remained an active member of the DHO until the 1970’s.  He made several contributions to the DHO journal including an illustrated story about a winter journey in his Bentley motor car from England to Germany with his friend Bill Perschke.  He had been invited to participate in the Arrangements Committee for the 1936 Winter Olympics which were held in Garmisch-Partenkirchen in Bavaria, Germany. 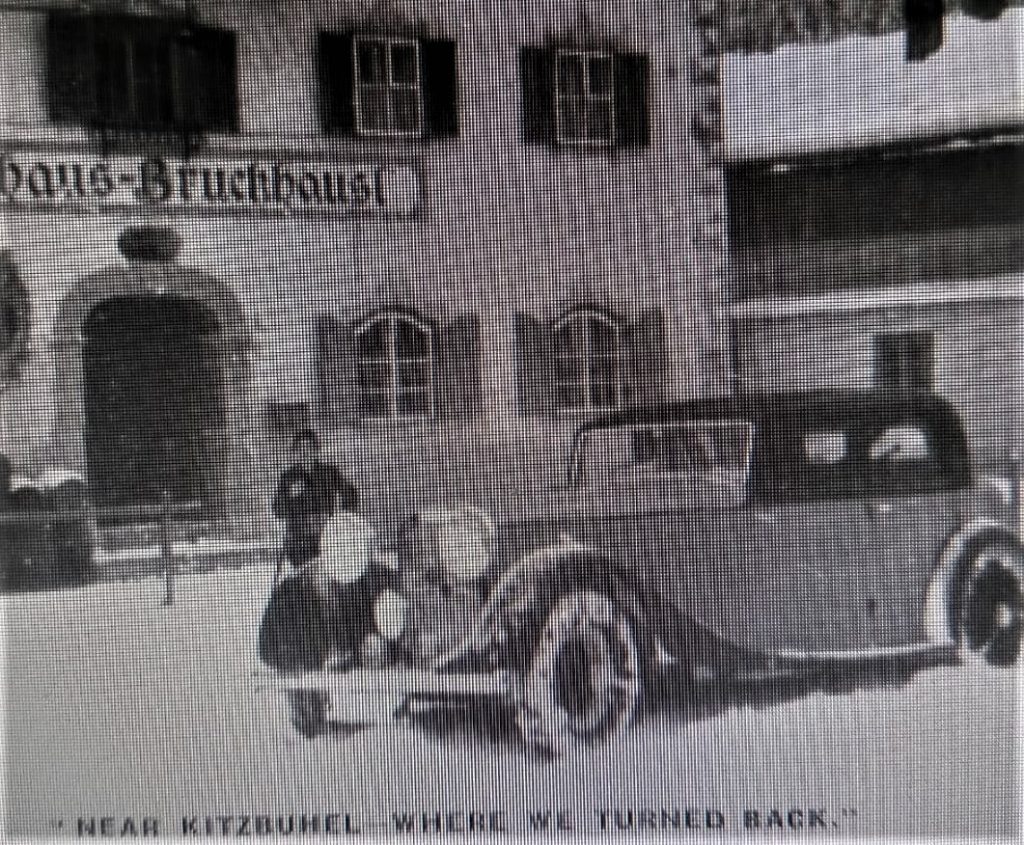 The ‘Odling Cup‘ awarded annually by the DHO Club for a downhill speed trial competition exists to this day in his memory.

Lt. Col. Odling was injured while fighting in one of the Regiment’s northerly gun troop positions at Mont des Recollets, Cassel on 28th May 1940.

Odling was captured at Cassel on 30th May and spent the years 1940-1943 as a POW in Oflag IX.  On 1st November 1943, at the age of 48 years and as a result of his injuries, he was repatriated to England via Sweden under the Red Cross scheme (see ‘Officers of the Regiment in Captivity‘ section of this website).

On his return to England, Odling remained in the Army as Lt. Colonel and was transferred to G2 of S.H.A.E.F. (Supreme Headquarters Allied Expeditionary Force) in Grosvenor Square, London from 1944 to 1945.

In 1945, Odling resumed his role as Chairman and Managing Director of the family marble business, Anselm Odling & Sons Ltd and remained active in the Downhill Only Club, including a spell as club President between 1946-48. 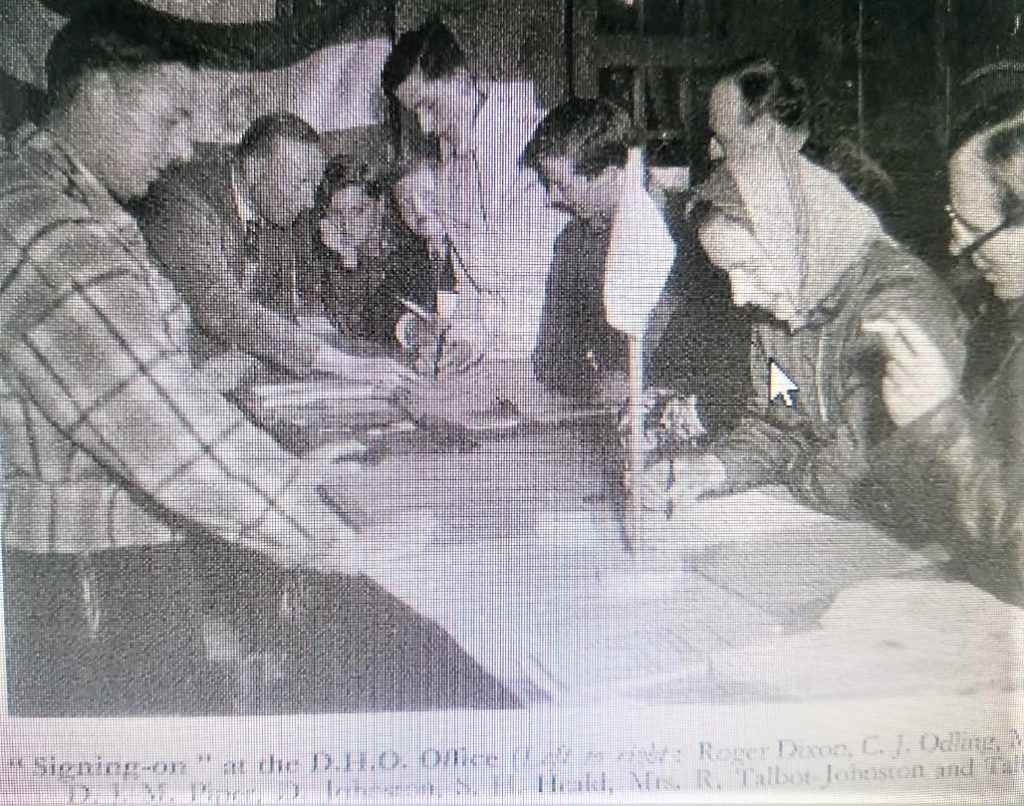 In 1974 he contributed to the Downhill Only club journal with some reminiscences about the early days of ski-ing in Wengen:

‘..Since the Hon. Editor asked me to write a few lines for the Journal in connection with the Golden Jubilee Celebrations of the Club next February, I have been digging around in the attic to try and find some records and photographs of those days when we formed the D.H.O., and to supplement a memory which in the course of years has ossified.

All my records as Hon. Secretary after Waghorn’s death until the start of the war in 1939 have been passed on to my successor. I am not really surprised to find that the ‘Brownie’ photographs in my one remaining album have not endured to show that my amateur efforts at developing and printing would ever be a credit to my hopes.

Conditions for skiing in Wengen in those days were primitive. Our primary task was to co-operate with the Kurverein in opening up gates and fences to permit a continuous run from Scheidegg to Wengen, and to convince the local land-owners that there was need for something more than a luge run.

We laid a firm foundation; we had some arguments with the farmers and with the Kurverein, but these did not go unresolved and our facilities quickly improved as more and more English visitors came to Wengen to ski. My recollection in those days is of G. C. Dobbs and his family, and then of Vivian Caulfeild who started the idea of teaching beginners to ski and to explore the slopes. The Swiss ski-schools were quick to take up these enterprises and to standardise their methods under Christian Rubi. Much has been written of the actual episode which sparked off the formation of the Club, as a humorous support for the team of Downhill racers which was taking on a similar team from Murren entitled the Kandahar. These arrived by train wearing badges and, to maintain the morale of our team, Ken Foster drew a comic figure on small pieces of paper which were pinned to our team’s coats but not surprisingly were not able to assure our victory.

The Club thenceforth set to, to raise an equally decorated team which in a few years would prove themselves winners. Our personal efforts in those first days were always given wholehearted support by Fritz Borter who was at about that time, taking-over the management of the Palace Hotel from his father. I have always been convinced that without this encouragement in those early days, the Club would never have prospered or been enabled to achieve the basic opening up of the ski runs from the top of the W.A.B. railway. Indeed, I am sure that if I were able now to take a run down from Scheidegg I should find it difficult to trace our old landmarks.

It has been a great satisfaction to me as a Founder to see the old names of my friends of those days still appearing in the lists of members, showing that sons and daughters are carrying on the job we started and contributing to the continued success of the Club.’

After retirement, Cedric Odling lived in Cuckfield, Sussex for 17 years. He never married.