The East Riding Yeomanry (E.R.Y.) joined the B.E.F. in April 1940 having crossed the English Channel via Southampton to Le Havre; the same harbours and route taken by the 140th Field Regiment the previous month.

The E.R.Y. had advanced into Belgium with the main thrust of the British advance into Belgium on 10th May 1940 and withdrawn via Tournai and Lille to join the 145th Brigade ‘Somerforce‘ at Cassel, arriving there on 26th May 1940. 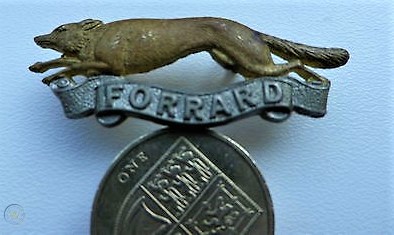 The E.R.Y. took up positions on the Mont des Recollets, sharing this site with the Chateau Masson HQ and three Gun Batteries of the 140th Regiment in the perimeter of the woods.  Mont des Recollets was heavily wooded and it appears that the trees provided good cover from the incessant German mortar attacks- shells would detonate in the tree canopies before causing serious damage to the ground below.

The position at Mont des Recollets became untenable by 28th May 1940 and the E.R.Y, together with 140th Regiment and others, had to withdraw to the garrison town of Cassel itself.

The War Diary of the E.R.Y. provides a graphic account of the Battle of Cassel and is reproduced verbatim here:-

The Brigade at this time had come under the orders of (1) ‘Macforce’, then (2) 145th Infantry Brigade [‘Somerforce’]

A” Squadron- South of TERDEGHEM

11:00 hr: Reported that the enemy had broken through at HONDEGHEM, this being part of the attack on CASSEL by the enemy from the FORET DU CLAIRMARAIS.

11.30 hr: A foot patrol from “B” Squadron (2nd/Lt. C.W. Cussons) to ST. SYLVESTRE reported the enemy present in that village, and No. 4 Troop (T.S.M. Arbon) “B” Squadron was instructed to block the approach there-from.  On carrying out this operation, T.S.M. Arbor and O.R. [Other Rank] were killed and one O.R. wounded; the remaining two carriers taking up the position.  In respect of ‘B’ Squadron 3 O.R. were wounded.

12:00 hr:  ‘B’ echelon was dispatched to woods North of LE TEMPLE; being shelled on the way out; 3 lorries were lost (one O.R. killed; 2 O.R.s wounded). N.B. The positions of all Squadrons were intermittently shelled all day.

14:00 hr: On receipt of orders for the Regiment to rendezvous on the road RYVELD – CASSEL; “C” Squadron were ordered to secure the ground North of the CASSELL – ST. SYLVESTRE road, while ‘A’ Squadron were ordered to act as rear-guard, and mines were laid on the road approaching the Squadron’s position, during which enemy tanks appeared from the direction of ST SYLVESTRE; these tanks however took an alternative route. Shortly after British troops in trucks coming from the same direction took the fork to the road ignoring signals to STOP.  One 3-tonner [truck] was blown up with casualties.

15:00 hr: R.H.Q. and “B” Squadron commenced withdrawal.  During this operation No. 6 Troop (2nd/Lt. Dupont) ditched their remaining 2 vehicles which had to be abandoned.

17:30 hr: The Regiment re-joined 1st Armoured Recce. Brigade on MONT DES RECOLLETS and took up a defensive position in conjunction with 1st Battalion Welsh Guards and 1st Fife & Forfar Company.  “A” Squadron covering the road between this position and CASSEL. The enemy lay close to the junction of ‘A’ Squadron and intermittent fire was exchanged. ‘B’ echelon arrived from LE TEMPLE.  The tanks and vehicles were parked in fields north of MONT DES RECOLLETS and outside the main defensive position, which later was strengthened by digging during the night. These positions suffered from intermittent enemy shell fire during the hours of darkness.

06:00 hr: During the morning CASSEL was shelled.

10:30 hr: A second foot patrol, “C” Squadron proceeded towards HONDEGHEM, where it located the enemy North of the village.

12:30 hr:  Both these patrols returned by an arrangement in carriers with Verey lights signals which proved to be a very satisfactory method, and the Officers reported to the Brigadier [Somerset].

14:00 hr: Orders were received from 1 Armoured Recce. Brigade to move North (Warning Order) to BERGUES, to hold a covering position.

15:00 hr: The above orders, so far as the Regiment was concerned, were cancelled and the Regiment was ordered to move into CASSEL (less “A” Squadron who were to maintain their existing position on the main road), coming under the Command of 145 INF. BRIGADE. (Brigadier Hon. Somerset DSO. MC.) whilst 1 Armoured Recce Brigade (less 1 E.R. Yeomanry) moved Northwards.  Regiments ‘B’ echelon, under the orders from Brigadier Somerset, proceeded with 1 Armoured Recce. Brigade No. 5 Troop “B” Squadron and one S.H.Q. Carrier “B” Squadron proceeded with ‘B’ echelon.

18:00 hr: The Regiment took up defensive positions South-east of CASSEL and “A” Squadron was subjected to shelling during the day (one O.R. was badly wounded).

06:00 hr:  Daylight showed that the enemy appeared to be all around CASSEL, and the town was subject to considerable shelling and mortar fire, both of which were particularly accurate.

[Brigadier Somerset will have disclosed the order to Breakout towards Dunkirk, but to keep the matter secret until dusk]

10:30 hr: A foot patrol (Composition from “B” Squadron. – Sgt. Brown) proceeded along the ST. SYLVESTRE road and contacted the enemy two miles out.  The enemy withdrew and the patrol were returned by carrier; this method again proving satisfactory.

14:00 hr: A composite tank troop, consisting of two Tanks “C” Squadron; one Tank “B” Squadron, under 2/Lt. C.N.W. Wilmont-Smith (“C” Squadron), proceeded as protection to 4 anti-tank guns of 211 Battery [53rd Worcester Yeomanry] Royal Artillery. (Major H.L. Mercer, RA, commanding).  Major Mercer’s orders were to make good, prior to the Brigade march North, the road to WINNEZEELE, and the crossroads South-west of that village.

14:50 hr: Written message by D.R. [Dispatch Rider] from 2/Lt. C.N. Wilmont-Smith to the effect that an enemy armoured car escorting French and British prisoners had been put out of action near WINNEZEELE; that our A.T. guns were in position and that WINNEZEELE was clear of enemy and that the re-captured French prisoners had been directed to CASSEL.

16:00 hr: Message from 2/Lt. C.N. Wilmont-Smith that one of his three tanks had been put out of action by anti-tank gun fire; that he was trying to get forward on the WATOU road by a circuitous route, and asking for reinforcements.

16:30 hr: “B” Squadron tank from MONT DE RECOLLETS, under 2nd/Lt. M.L. Lindley, was ordered out to contact 2nd/Lt. C.N. Wilmont-Smith and his remaining tanks and make good the road to WATOU. N.B. At this stage, many of the Regiment’s wireless sets were out of action, owing to the non-provision of charging sets, demanded under A.F.G.1098.

18:30 hr: Captain Brown (“B” Squadron) returned on the back of a motorcycle; stated that his tank and crew, who had been moved by 2nd/Lt. C.N. Wilmont-Smith from the cross-roads at LE TEMPLE up to WINNEZEELE, had been destroyed by anti-tank gun fire and he could give no information regarding his Troop Leader.  Cpt. Brown also reported the presence of an enemy tank on the fork roads east of CASSEL.