The Final Day, Cassel Holds Out 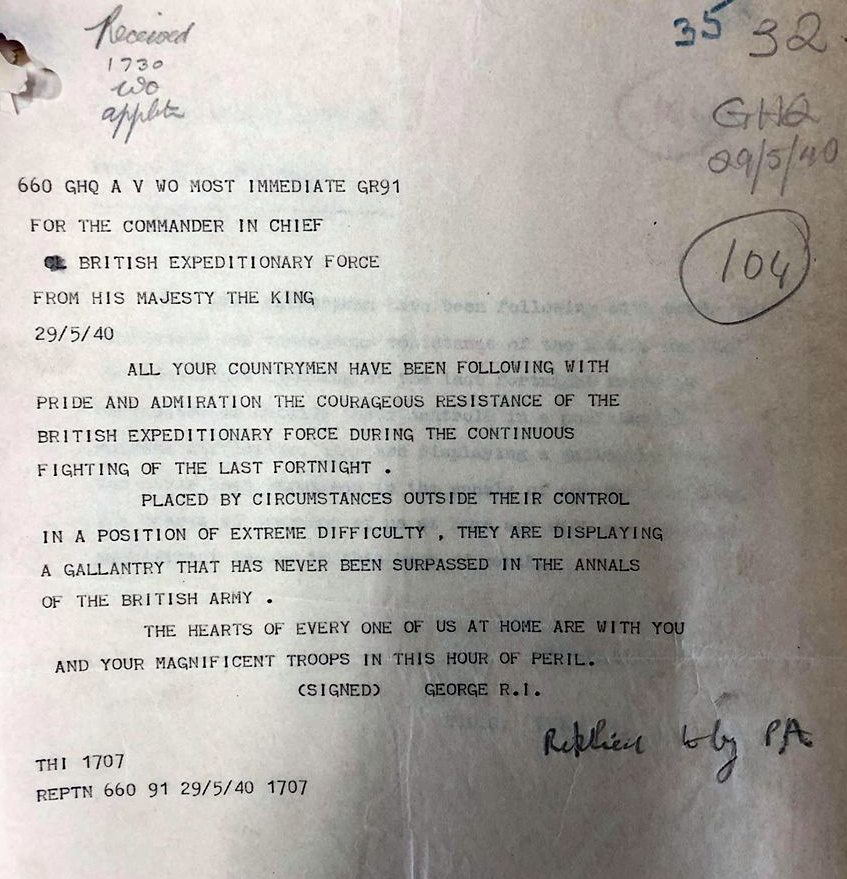 The German forces did not attack after darkness had fallen on the night of 28th May 1940, although considerable movement was noticeable in the surrounding country, with German troops now clearly visible to the North of the town effectively cutting off escape to the Dunkirk beaches.

At Dunkirk, by now 58,000 troops had been successfully evacuated and more than 500′ little ships’ were being assembled in Sheerness to facilitate the Operation Dynamo evacuation.

Somerset’s War Diary entry for 29th May starts with: ‘From first light the enemy started shelling and this continued with varying violence all day……’ 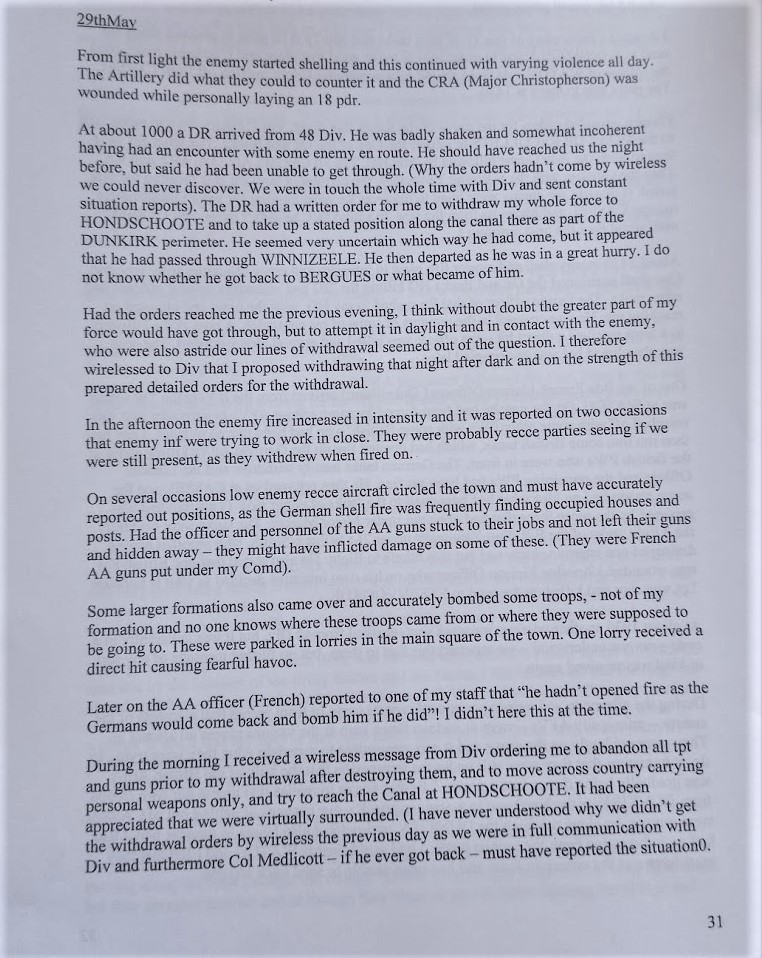 And goes on: ‘The Artillery did what they could to counter it and the CRA (Major Christopherson) was wounded while personally laying an 18 pdr.

At about 10.00 a DR [Dispatch Rider] arrived from 48 Div. He was badly shaken and somewhat incoherent having had an encounter with some enemy en-route. He should have reached us the night before, but said he had been unable to get through. (Why the orders hadn’t come by wireless we could never discover. We were in touch the whole time with Div and sent constant Situation reports). The DR had a written order for me to withdraw my whole force to HONDSCHOOTE and to take up a stated position along the canal there as part of the DUNKIRK perimeter. He seemed very uncertain which way he had come, but it appeared that he had passed through WINNEZEELE. He then departed as he was in a great hurry. I do not know whether he got back to BERGUES or what became of him.

Had the orders reached me the previous evening. I think without doubt the greater part of my force would have got through, but to attempt it in daylight and in contact with the enemy, who were also astride our lines of withdrawal, seemed out of the question. I therefore wirelessed to Div that I proposed withdrawing that night after dark and on the strength of this prepared detailed orders for the withdrawal.

In the afternoon the enemy fire increased in intensity and it was reported on two occasions that enemy infantry were trying to work in close They were probably recce parties seeing if we were still present, as they withdrew when fired on.

On several occasions low enemy recce aircraft circled the town and must have accurately reported out positions, as the German shell fire was frequently finding occupied houses and posts. Had the officer and personnel of the AA guns stuck to their jobs and not left their guns and hidden away they might have inflicted damage to one of these. (They were French AA guns put under my Comd.)

Some larger formations also came over and accurately bombed some troops, not of my formation and no one knows where these troops came from or where they were supposed to be going to. These were parked in lorries in the main square of the town. One lorry received a direct hit causing fearful havoc. Later on the AA officer (French) reported to one of my staff that he hadn’t opened fire as the Germans would come back and bomb him if he did (I didn’t hear this at the time).

During the morning I received a wireless message from Div ordering me to abandon all tpt and guns prior to my withdrawal after destroying them, and to move across country carrying personal weapons only, and to try to reach the canal at HONDSCHOOTE  It had been appreciated that we were virtually surrounded (I have never understood why we didn’t get the withdrawal orders by wireless the previous day as we were in communication with Div and furthermore Col Medlicott -if he ever got back- must have reported the situation.’

The main German thrust against Cassel came from the South-West by the 6th and 8th Panzer (tank) units attempting to force a route to the south of Cassel, with the 8th Panzer unit spearheading an attack on the supply depot at Eecke.  Cassel was described by the German officers as a ‘nest of furious resistance’. General von Block wrote in his diary on 30th May 1940:

‘ this struggle is hard. The British are as tough as leather, and my divisions are exhausted. The right wing of 18th Army is not going forwards…’ 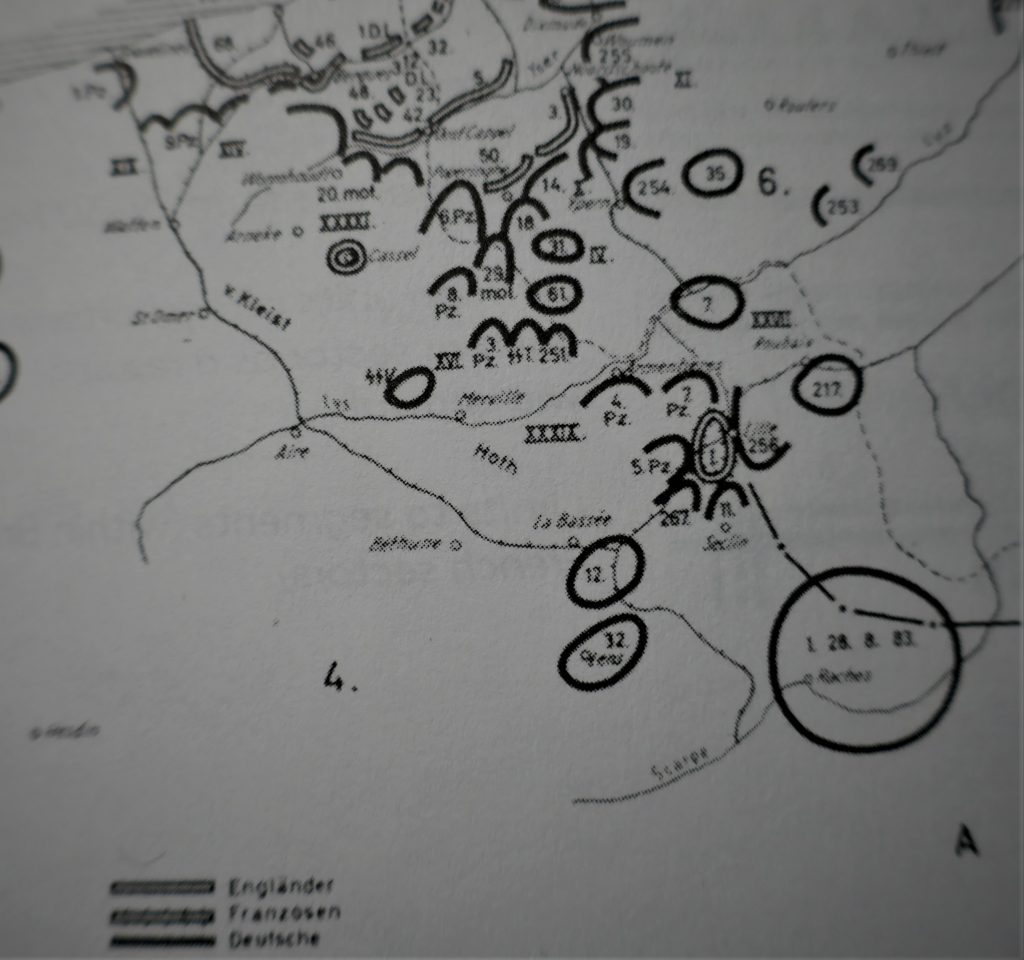 German military position at the end of 29th May 1940. The British-held Cassel garrison is by now totally surrounded as the 6th Panzer army has penetrated as far as the Franco-Belgian border. From ‘Dunkirk- German Operations in France 1940‘ by Hans-Adolf Jacobsen

Although the garrison had suffered significant casualties, an appreciable number of enemy tanks were now lying derelict in open country.  The Field Ambulance HQ in the town centre had received a direct hit from a Stuka attack resulting in several casualties, some are now buried in the towns’ cemetery.

The outlying ‘picket’ villages of Bavinchove and Zuytpeene had by now been captured by the Germans, with some survivors successfully making their way back to Cassel. 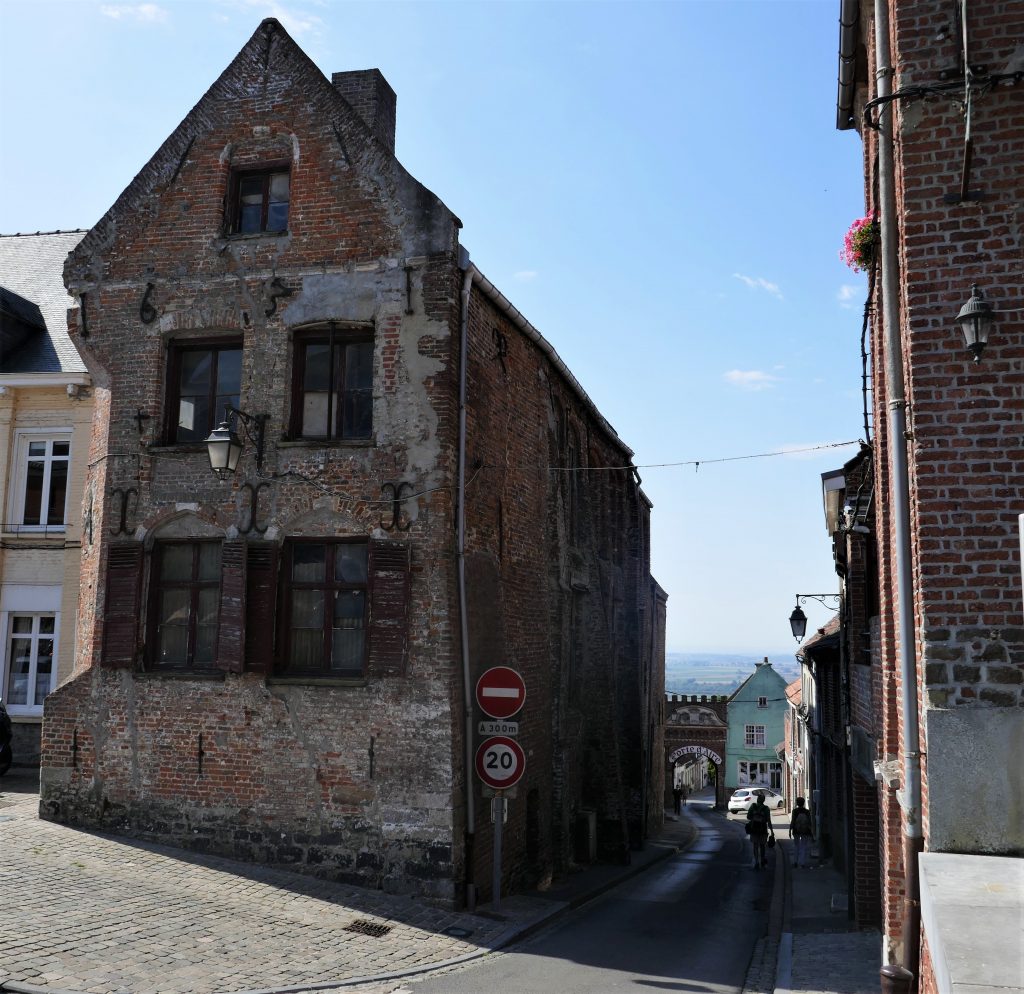 At Hardifort, Lt Cresswell was out of communication with Cassel and was managing to stubbornly hold on at the Le Pequel bunker against overwhelming odds, as recounted in his War Diaries.  The bunker was held until the last possible moment, aware that the lack of artillery fire and activity from Cassel signified that the town had by now been captured.  He was forced to surrender the bunker on 31st May. 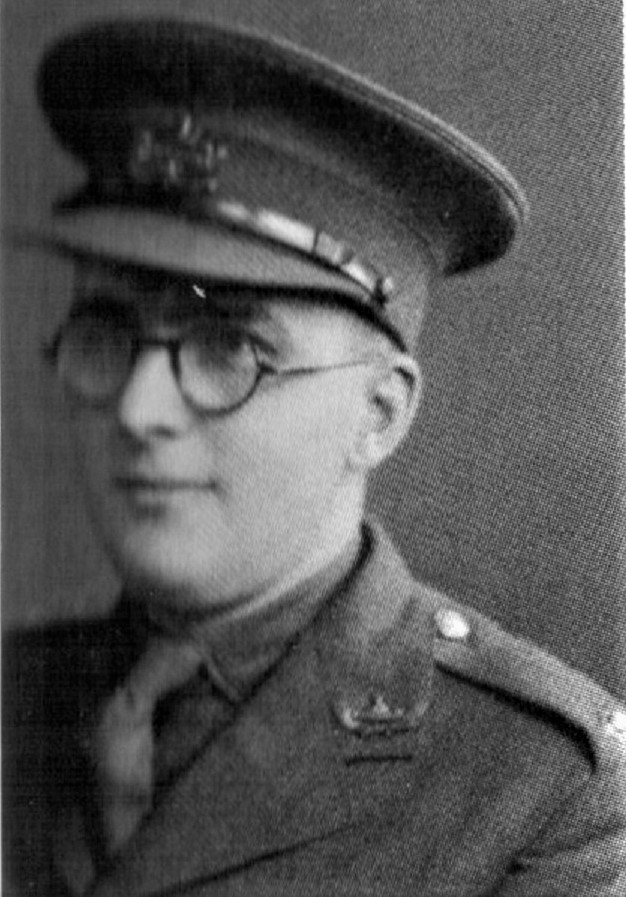 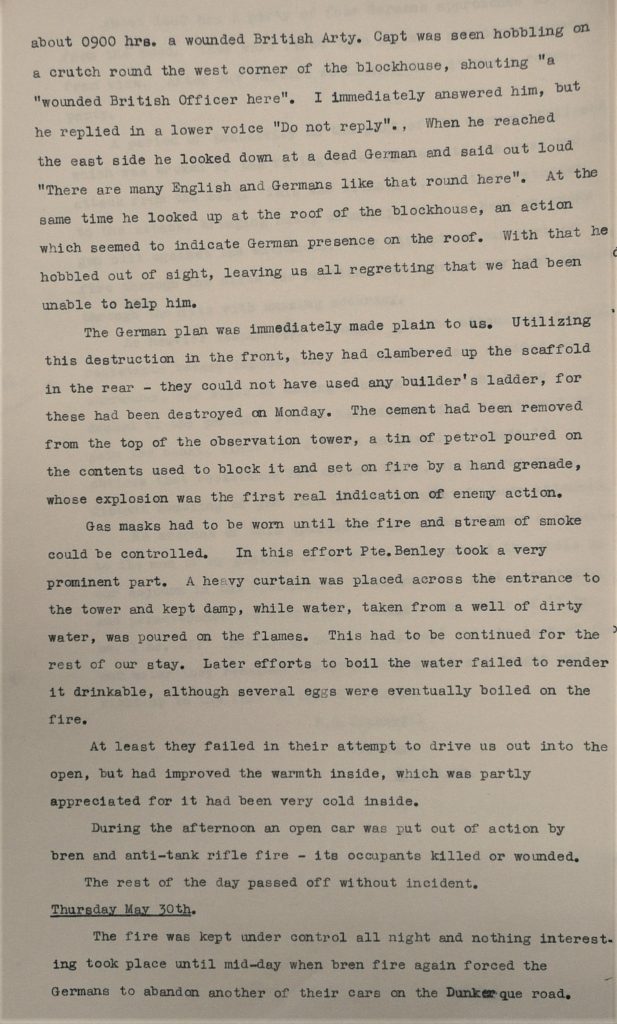 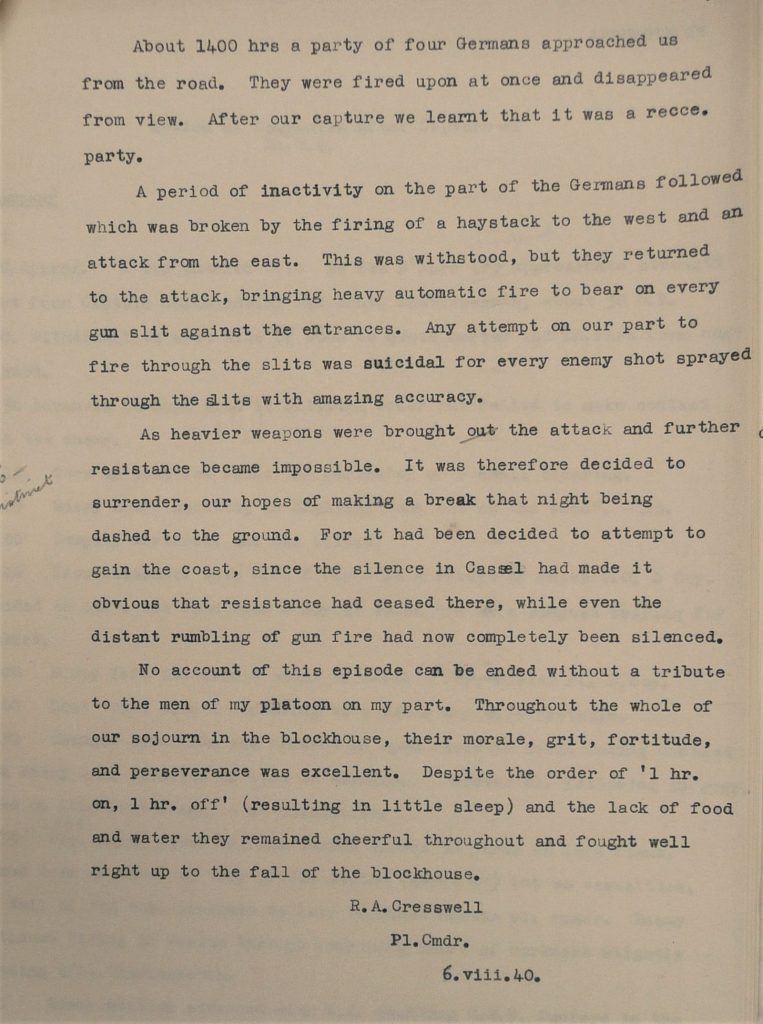 Lt R.A Cresswell MC and his account of the defence of Le Pequel Bunker, 29th-30th May 1940

Thus, the garrison of 14 men of the Gloucester Regiment at the le Peckel blockhouse, who had been out of contact with Somerset, had managed to hold out for three days of continuous German attack, only surrendering when German infantry had overrun the blockhouse (German forces were literally on the roof of the bunker where they had set a fire) and all sounds of the battle in Cassel had ceased.

A machine-gun platoon had reinforced the junction with the 4th Ox. and Bucks, and a section of 140 Regiment’s 18-pounders were positioned in the Ox & Bucks Battalion “keep” area in the town centre.

2nd Lieut. Gerry French, an Intelligence Officer in the Gloucestershire Regiment,  was killed by a mortar bomb, while on a mission to liaise with one of the field guns regarding the targeting of a German mortar position. 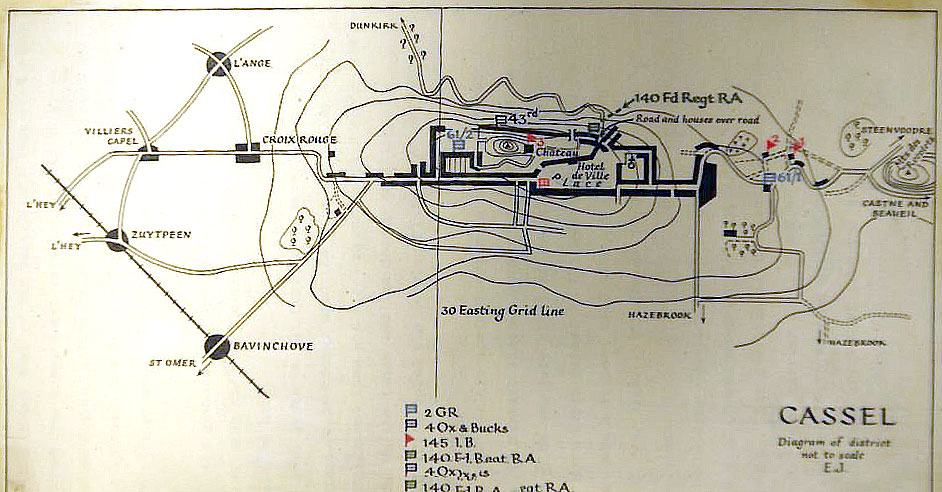 Sketch map of Cassel, drawn from memory by Capt. E. Jones, Gloucester Regiment in a POW camp. It shows the probable site of a 140th Regiment gun position to the north where Major Christopherson was injured after firing on German mortars.

Later on the morning of Wednesday 29th May, another heavy and sustained attack broke out again, preceded by concentrated mortar bombardment.   There were attacks from three sides simultaneously.  In places the defences were driven in and casualties mounted.

During the fighting of the morning of 29th May at about 10.30, and despite his better judgement, Major Christopherson was ordered by Somerset to fire on German mortar positions.  He carried out this order with one gun, positioned on the D218 Road on the Northern perimeter of Cassel and firing over open sights, but the predicted retaliation from German mortars killed two men including Gunner Woolston (who is buried in Cassel Cemetry) and Christopherson himself was injured.

Christopherson’s injury meant he took no further part in the battle and the war diary, written retrospectively  after his return from captivity in 1945, concludes on this day. 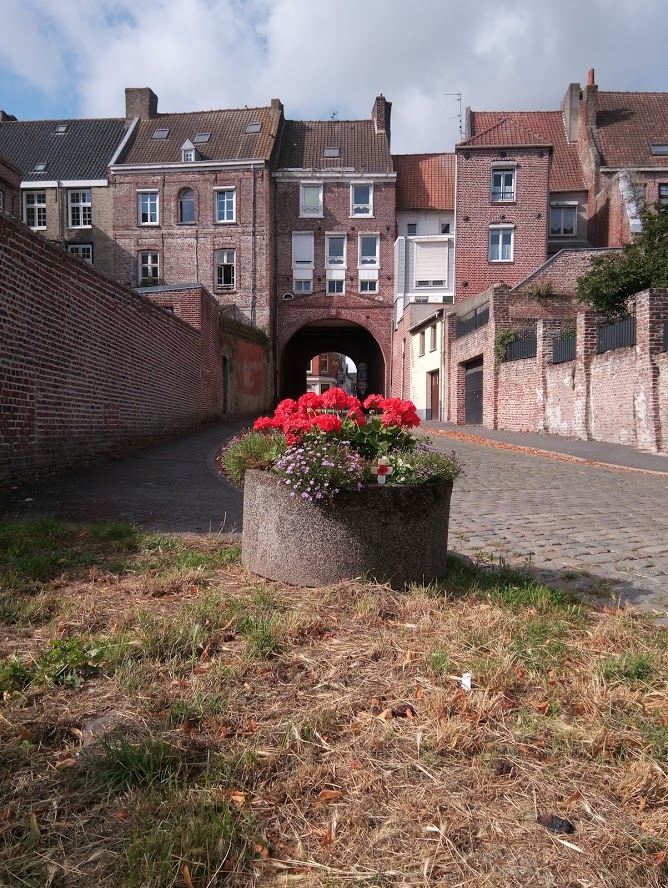 Major Christopherson’s probable gun position at the time of his injury, 10.30am on the 29th May 1940 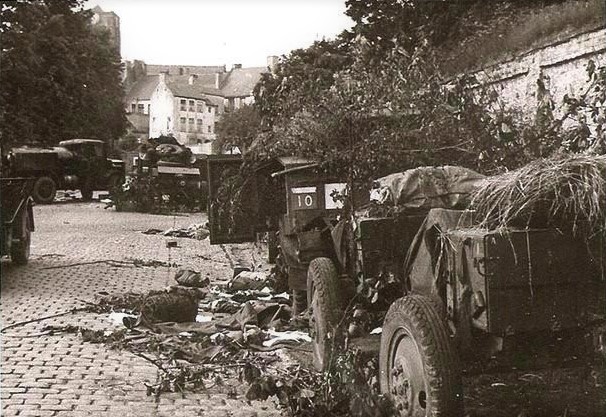 In spite of mounting casualties and ever-diminishing effective manpower, the German forces still did not manage to gain a foothold in Cassel.  By midday the attacks slackened off.

The fighting had died down completely by about 17.00 hrs and it appeared that the enemy had withdrawn from their respective fronts.  More German troop movement could certainly be seen away to the north, but too far away to engage with fire.  By now, Cassel had been severely damaged, but, apart from occasional low-flying Luftwaffe aircraft, all action had ceased.

To its credit, and against all the odds, the Somerforce had succeeded in holding Cassel. By this stage the German panzers and infantry were simply bypassing the town and continued their advance to the North and South, effectively surrounding it.

In the afternoon, a 48th Division Royal Signals dispatch rider managed to reach the town, 24 hours later than planned, with an order from General Thorne at Lord Gort’s Headquarters that the garrison should withdraw and try and make a rendezvous near Dunkirk.

Brigadier Somerset started to plan the breakout.  He could see that the situation at Cassel had become untenable and that there was no prospect of British counter-attack or rescue.  He told his HQ staff to keep the news secret from the men as he could see that there was no realistic prospect of escape until nightfall.  Somerset identified the D137 road that headed North East towards Winnezeele and sent a detachment of the East Riding Yeomanry to investigate the route.  The East Riding Yeomanry were also assigned the task of protecting the rear of the breakout, thus assigning the men of that Regiment to almost certain capture.

Caught in a pincer

Once the news of the evacuation began to filter through, the British troops had high hopes of being able to make a successful getaway.  This was to be a fighting retreat and the soldiers were armed with rifles, Bren guns and grenades.  What was not known then, however, was that this withdrawal to Dunkirk was intended  twenty-four hours earlier;  the delayed arrival of the message now rendered withdrawal to the coast virtually impossible, as Cassel was completely surrounded and all approaches to the sea were effectively blocked by the closure of the German pincer movement around the Belgian town of Poperinghe.

‘An enemy attack was repulsed to the west of CASSEL by the Infantry without the gunners being called upon for assistance. I was at 145 Brigade H.Q.  and was informed that a Signal Sargent from 48th Division Signals had arrived telling the Brigadier that the CASSEL garrison was to retire at once to BERGUES and that this message should have reached him during the night 28th/29th May.

The Brigadier [Somerset] decided that owing to the enemy having nearly surrounded his force he would not make the attempt until darkness. About 10.30 hrs. the Brigadier asked me to harass the enemy mortars to the N.W. of CASSEL as they were giving the Infantry an unpleasant time. I pointed out to the Brigadier that although I was quite prepared to help, any firing done by the Regiment would bring down unpleasant consequences to his immediate surroundings but he pointed out that it would be a good thing to raise the tails of the Infantry a bit higher. I therefore took one gun with its detachment and fired on the mortars over open sights. Just as the gun had got the range other enemy mortars got the range of the gun and began plastering us. The result was that two of the detachment were killed and I was knocked unconscious’.

‘The above is the end of my diary as far as I am able to give. The following are points which I think would be of use: –

At no time throughout the operations was the Regiment short of food and ammunition.

I understand that on the afternoon of 29th the Brigadier ordered that all guns and equipment be destroyed and the dismounted Regiment to march with his Brigade. Most of them were killed or captured on the 30th.