The East Riding Regiment’s War Diary provides a graphic account of the  Breakout from Cassel and is quoted here verbatim: –

Owing to congestion of other units preceding the E.R. Regiment, progress was slow and the Regiment was not clear of CASSEL until 24.00 hrs.

A number of buildings, well on fire, were safely circumvented.  The motorcycles of the Regiment were destroyed by order.

01:00 hrs A delay took place beside MT. DE RECOLLETS owing to other troops on foot being behind schedule.

03:00 hrs: Withdrawal proceeding satisfactorily; several villages noted on fire; and, as day broke, there was a ground mist.

05:00 hrs: The withdrawal was held up by enemy around DROGLAND; the infantry being held up. Infantry Carrier unit going forward, two vehicles were destroyed by anti-tank gunfire; 2/Lt. Clark-Brown (4th Ox. & Bucks) being reported killed.

After an exchange of machine gun fire from the leading vehicles of the Regiment, and a patrol by 4 & 5 Composite Troop.(2/Lieut. N.R. Jones) “A” Squadron, the advance appeared to be resumed by the infantry; while the Regiment moved across country to a limited extent in the direction of HERZEELE, shortly coming under fire from enemy medium guns, and sustaining casualties. 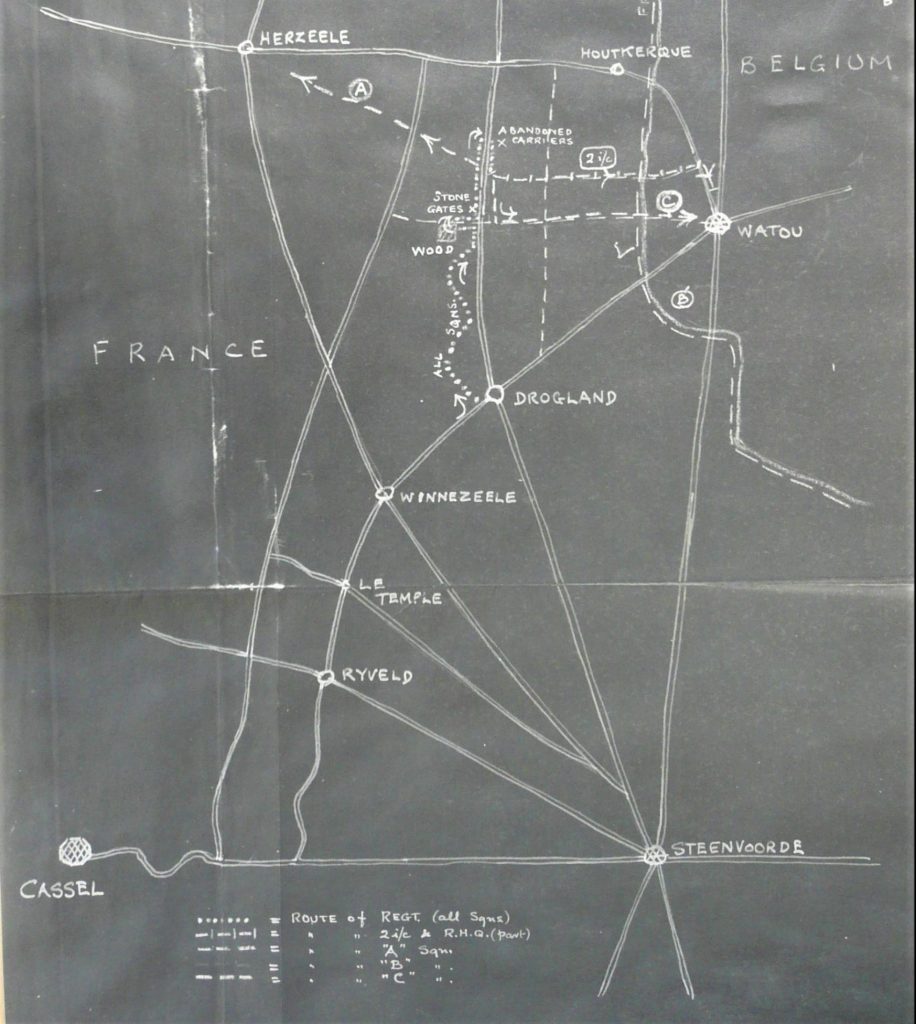 The composite carrier units went forward until 2 of their vehicles were destroyed by A.T. fire; 2/Lt. Clarke-Brown (4 Ox. Bucks) being reported killed (actually – “afterwards died of wounds”).  The remaining carriers returned to the head of the Regt., and, apart from the above, no message or information was sent back by 2 Glos.

The ‘fanning-out’ movement was then observed to cease and some of the 2 Glos. came back; meanwhile, the leading vehicles of the Regt. exchanged M.G. [machine gun] fire with the enemy and a patrol by 4 & 5 (composite) Troop. (2/Lt. R.N. Jones) ‘A’ Sqn. was sent out but did not return.  As forward movement appeared impracticable, the Regt. moved N.W. across country in the direction of HERZEELE, shortly coming under fire and sustaining casualties.  The Adjutant’s tank “Vigilant” was ditched soon after leaving and had to be abandoned.  Capt. S Bearne mounted the rear of his C.O.’s tank, but later, owing to the rotating turret and fire from the enemy, had to dismount.

Capt. Bearne then proceeded Eastwards on foot, collecting about 14 officers of various units, with only 3 rifles, and 2/Lt. Reid and Lieut Michel (Liaison Officer) both wounded the previous day, and R.S.M. Stocking.  Held up on the DROGLAND – HAUTKIRCHE road, this party laid-up; having lost 2/Lt. Reid, who fell insensible whilst running over some open ground.  Early next morning (31 May), the party reached HONDESCHOOTE, to find the enemy there, so they re-crossed into France, reaching the River YSER, to be taken prisoner in a deserted farm.

It was here and onwards that owing to the totally inadequate (actually – practically non-existent) supply of smoke dischargers, that casualties were unduly heavy.

By now, the Regiments dispositions were:-

‘A’ Squadron with the Commanding Officer, who had come up to see if a way through was possible, and attacked carriers of 2 Glos. & 4 Ox. & Bucks. on the southerly outskirts of a hamlet S.E. of HERZEELE; and the remainder of the Regiment rallied by a T-road, with stone gates nearby, and in a wood close-by, under the 2 i/c [2nd in command].

The few maps in possession were ¼” scale, which were not particularly accurate, and difficulty has been experienced since capture in ‘pin-pointing’ the subsequent events.  From this time onward, the events become a series of local operations in the attempt to get through to the coast, and it has subsequently been learnt that this was so throughout the whole CASSEL force.  Therefore, this Diary will now recount the fortunes of these various groups.

On arrival at the outskirts of the hamlet, a few infantry stragglers reported to the Commanding Officer that the hamlet was lightly held and could be forced with armoured vehicles, so 3 columns of carriers were organised to take it, as follows:-

No reports came back and it was assumed that the attack had been unsuccessful (which afterwards was found to be the case) so ‘A’ Squadron moved N.W. towards HERZEELE, No. 3 Troop rejoining them having put out of action an enemy A/T gun.

At this juncture, it should be noted, that the ground was totally unsuitable for our light type of vehicle; as the vehicles practically could not leave the roads and the Gort Line not only made additional obstacles, but later in the day also made the task of small parties of the Regiment on foot exceedingly difficult.

Major H.M.V. Wright (O/C. ‘A’ Sqn. ) made contact with Lt. Col. Gilmore (Commanding 2 Glos.) on the outskirts of HERZEELE, and 2/Lt. Sir L. Leslie led a foot patrol which successfully drove the enemy out of a cottage.  Further advance being impossible, Lt. Col. Gilmore decided to lay-up in the woods south of the village, and this was accomplished under very heavy mortar fire.

As no useful purpose could be served by remaining with Lt. Col. Gilmore, Major Wright then decided to move on.

Whilst a recce was being made by Major Wright a short distance out of the woods, enemy tanks supported by infantry were observed coming from the direction of DROGLAND, and 2 more enemy tanks coming out of HERZEELE which attacked and captured H.Q. & Glos.

Here it must be remembered that the enemy tanks had a better cross-country performance and were larger, more heavily armoured and carried guns against our Machine guns, Bren guns & Boyes anti tank guns and that the enemy system of working their tanks with infantry and anti-tank guns by Verey–light system showed a very high standard of training.

By now, nearly all ‘A’ Squadron vehicles had become casualties and parties of enemy infantry were met, engaged in ‘mopping up’.  The remains of ‘A’ Squadron were now in small groups, and, by 31st May, were all either, casualties or prisoners, their arms latterly consisting of a few rifles and revolvers (there being very little ammunition for the latter throughout the Regiment and hand grenades had never been available for issue, in spite of the scale laid down.

It was reported that Capt. D. Hall (2 i/c ‘A’ Sqadron) and Capt. T.E.B. Sissons (2 i/c ‘C’ Squadron) were killed whilst gallantly engaging superior numbers of the enemy on the ground.

During this time the remainder of the Regiment, which had rallied at the cross-roads and in a nearby wood were attacked by 2 enemy medium tanks.  R.H.Q. tank “Valiant” (Major Hodgson) engaging these, later to be hit by a shell in the petrol tank, which did not however put the tank out of action, and ‘B’ Squadron H.Q. tank “Hector” being ditched and set on fire by its Comdr.  After the 2 enemy tanks passed, a reece, by 5 Troop ‘C’ Squadron. (2/Lt. J.F. Cockin) reported enemy fire and A.F.V.s to the N.W., so Major Hodgson (2 i/c) made a plan for continuing the advance in a northerly direction, which ran through the hamlet previously mentioned.  Here the carriers of the 2 Glos. & 4 Ox. & Bucks were found abandoned, one being taken into service by the Regiment.  On emerging from his hamlet, all cover ceased and fire came again from the N.W.  Major Hodgson, then decided to move East, whilst ‘C’ Sqn returned to the cross-roads and then was to proceed East.

The vehicles under Major Hodgson came under fire from the E. and, in crossing the Gort Line, the majority of the remaining carriers were ditched.  Shortly after turning right into the main road leading into WATOU, R.H.Q. tank “Valiant” was fired on at 30 yards range by an enemy anti-tank gun which killed the driver and caused the tank to overturn.  This was the last surviving vehicle under the command of Major Hodgson.

It is well to maintain that the enemy, who had been reported thin on the ground, were in fact in strength.  That they made no movement during the hours of darkness was confirmed at the break of day by the sight of vehicles and anti-tank guns parked in and near farm buildings, and passed by the Regiment since leaving CASSEL.

Also, WATOU, which was reported to be held by our forces, had in fact been taken on 28th May by the enemy.

The remains of ‘C’ Squadron. under Major G.M. Radcliffe, on leaving Major Hodgson, came back to the ‘Stone Gates’, where they were met by the C.O. in his tank “Vanguard” which had just engaged an enemy light tank at 40 yards range and, after a duel of machine gun fire, had put the enemy tank out of action.  (The 0.5 M.G. did not function in this action, owing to feed belt trouble, which was always a factor with the feed of this type of M.G.).  Major Radcliffe reported having made ‘hors de combat’ on enemy medium tank.  He was ordered to make the best way possible to the objective.  It was quite apparent now to the C.O., and had been for some time, that only the greatest good fortune would get some of the Regiment through, and also that the vehicles were becoming more of a menace than a help, owing to the large number of anti-tank guns and enemy medium tanks, also armed with guns.

The loss of this gallant Officer was a great one, as throughout the whole of the operations he had shown outstanding courage, cheerfulness and leadership, and was well fitted for a higher command.  No details of the death of 2/Lt. Cockin have yet become available.

The Regimental Medical Officer (Capt. J. Burns RAMC) arrived at the ‘Stone Gates’ together with wounded on carriers, whom he had picked up during the operations.  He joined a composite force under Major G.S. Wade and his 2 i/c, Capt. R.S. Smith, in a carrier, and the carriers of 2/Lt. T. Carmichael (I.O.); 2/Lt. R Waterhouse and 3 other carriers.

This force proceeded East and then turned S.E., passing over the frontier without incident, contacting a party of British troops who stated that WATOU had been in enemy hands since the evening of 28th May.  Crossing the WATOU – POPERINGHE road, the force was reduced to 3 carriers; through breakdowns.

Whilst halted under cover, an enemy recce. car approached from the rear.  This was engaged by 2/Lt. Waterhouse with Bren, and, after 2 magazines, was totally put out of action.  The 3 carriers moved on rapidly after this in a Northerly direction and Major Wade’s carrier was put out of action, as later were also the remaining two.  The action of Trooper Bell in an endeavour to position his carrier in very close proximity to the enemy was very praiseworthy, and, the M.O., who was nearby, was also slightly wounded by the hand grenade, which put Bell out of action.

The C.O., after sending on the vehicles at the ‘Stone Gates’ had some difficulty in rejoining his tank “Vanguard”, which was some distance away under cover owing to enemy fire, and, in attempting to move across country “Vanguard” became ditched in a very blind and deep drain.  Continuing on foot with the crew, and picking up 4 stragglers of the Regiment (with 1 rifle) the party was eventually captured; two of them being wounded.

Since capture, none of the ORs, of the Regiment have been met (except 10 ORs. who were wounded and only seen by the M.O. in various hospitals), so that details of the final casualties & the fate of the marching party from CASSEL, are unknown, as also are the deaths of 2/Lt. R.L. Hudson and 2/Lt. Brabrook.’