Herbert Reginald Graham Brooks was born in 1895 in Orsett, Essex.  He was educated at Clifton College, Bristol and served in the Great War as an Artillery officer.  In 1918 he was awarded the Military Cross for gallantry.

After the First World War, Brooks worked as primarily as a barrister but had also been an actor, civil servant, lecturer and a journalist.  He had also allegedly fought a duel in Germany.

In 1939, at the age of 45 years, Major Graham Brooks, M.C. became the officer commanding 366 Battery.  He was a short and stocky monocle-wearing extrovert known to the men as ‘Brooky’.

After Dunkirk, in June 1940, Brooks became the Commanding Officer of the 140th Field Regiment, tasked with reforming the force after their catastrophic loss of men and material (all of its 18-pounder guns and equipment had been abandoned in France) and was promoted to Lt Colonel. 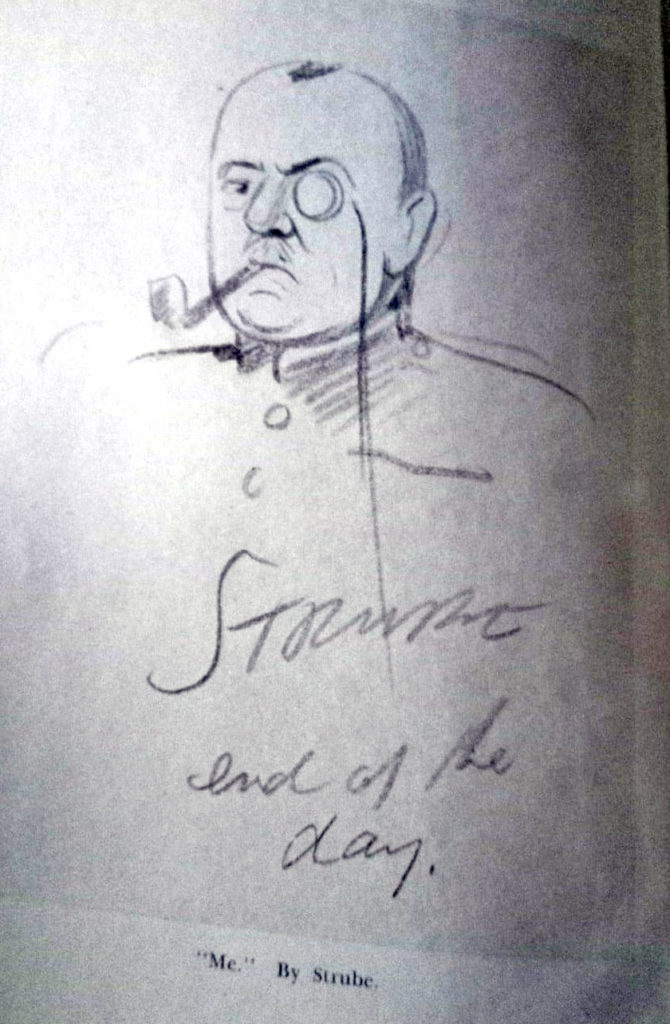 Between the wars Brooks practised as a Barrister.  He worked for the Daily Express newspaper and was on friendly terms with its proprietor, Lord Beaverbrook.

Dennis Clarke was a foreign correspondent for the Daily Express, based in Vienna and Paris. Tony Phillpotts was Assistant General Manager of the Evening Standard and later went on to be the military Secretary to General Auchinleck, and promoted to Lt. Colonel

In 1915 Brooks married Grace Wilson at St Andrews, Westminster; the marriage ended in divorce in 1924.  In 1927 Brooks married his 2nd wife Dorothy Summer in Fulham, London.

Brooks was injured at Dunkirk after inhalation of sea water, which resulted in his invalidity from the Army.  In December 1940 was mentioned in dispatches and recommended for an award. Brooks modestly fails to refer to his Distinguished Service Order citation anywhere in the text of ‘Grand Party’:

DSO Citation– ‘During the period 20-22nd May on the Escaut, this experienced officer was ubiquitous in his energy in commanding an offensively active battery which gave a ready response to all calls made on it.  On the evening of 28th May near MESSINES he manned an O.P. [observation post] during the final rearguard action of the 5th Division, and inflicted casualties on the enemy. His conduct throughout the operations in Flanders has won the admiration of all ranks in his battery.’

Brooks wrote an illustrated book about his experiences with 140th Field Regiment in France and Flanders entitled ‘Grand Party‘.  The book, written in 1941, is now out of print but rare copies still circulate and are obtainable through antique bookshops.  Grand Party is a valuable record of day-to-day life in the Regiment, and in particular contains the only account of 366 Battery after the separation of the two Batteries of the Regiment on 23rd May 1940.  It includes a graphic description of their escape to Dunkirk and return to England.

Brooks describes the men of the Regiment in admiring and affectionate terms and also writes some personal analysis of how in his view the German assault of 1940 had been so devastatingly successful.  Some of the information in the book was subjected to censorship as it was written during wartime.

The forward to Grand Party was written by John Gordon, who at the time was editor of the Sunday Express newspaper. 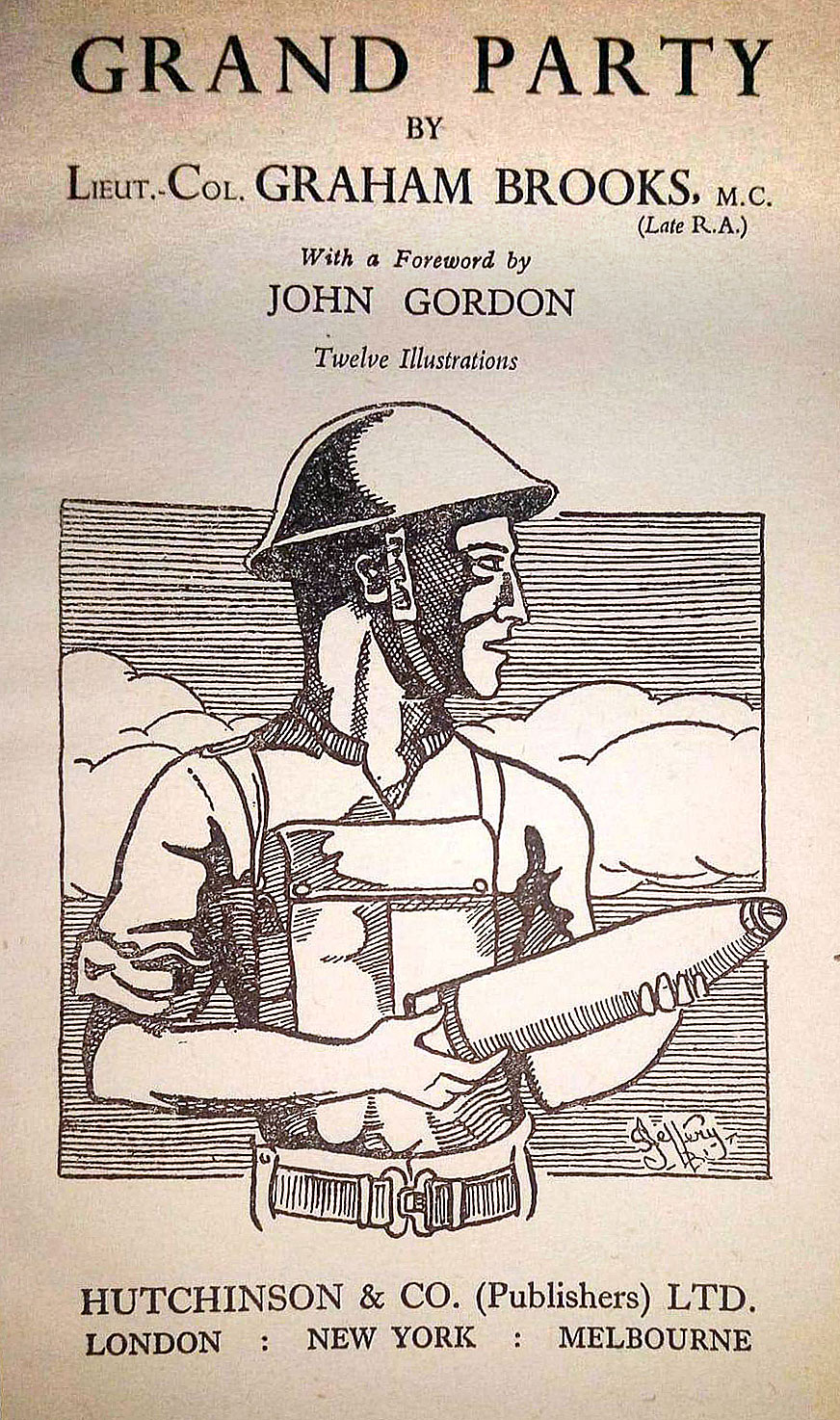 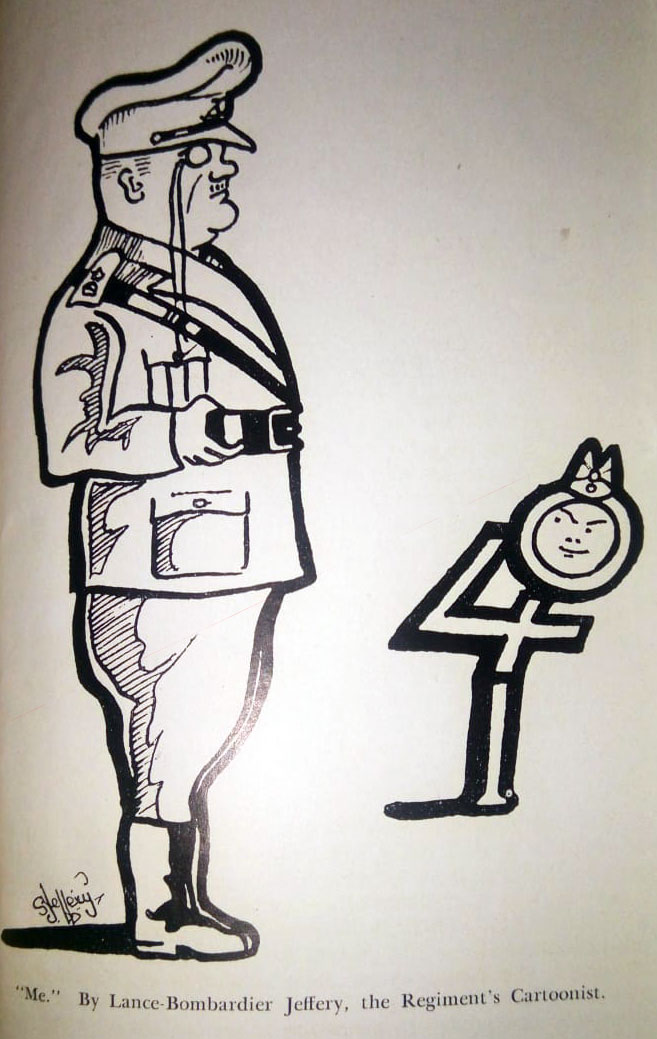 Another cartoon depiction of Lt Col Brooks, together with an unofficial 140th Regiment ‘logo’ by Lance Bombardier S. Jeffery, who survived the War.

After Dunkirk, Brooks was promoted Lieutenant-Colonel and became Commanding Officer of the re-formed 140th Field Regiment, tasked with its re-organisation and redeployment, until his invalidity in 1941.

Brooks died shortly after the end of the war on 27th October 1946 at the age of 51 years.  At the time of his death he was  living at 26 Abingdon Villas, Kensington, and left his estate to his Clerk Sidney Taylor.

Lt. Colonel H.R.G. Brooks MC was cremated at Golders Green Crematorium, London where his name is recorded on a Commonwealth War Grave Commission memorial plaque.  Flt. Lt. the Hon Michael Benn, the brother of Labour peer Tony Benn, is also commemorated on this plaque having been killed in an aircraft accident on 23rd June 1944. 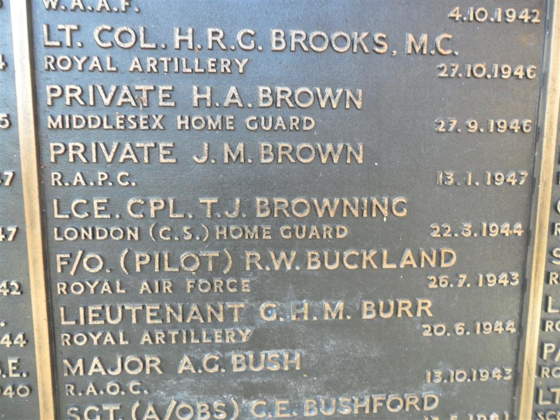