As the Russian Army approached the Allied POW camps during January 1945, Hitler made an order that all the camps should be evacuated and the POWs forced-marched Westwards away from the approaching Russian troops, towards Germany.  The majority of Stalag VIIIB inmates were marched for more than 450 miles on a route through Czechoslovakia skirting to the North of Prague, ending their journey 3 months later in April 1945.  It had been the coldest winter for many years and there was deep snow.  The conditions on the Long March were notorious and have been well-recorded elsewhere.

Paradoxically some of the Officer POWs in Oflags were marched eastwards , away form the advancing Allied forces and deeper into German-held territory.

We have no definite information about my fathers’ route, other than he set out from the E72 work camp on 23rd January 1945 and his route included Czechoslovakia.  He told us that the behaviour of his guards improved as they approached the German frontier.  He told us that he was liberated by the advancing American army in late April 1945.  His military record states 4th May 1945 as date of liberation and his return to the UK on 2nd June 1945. 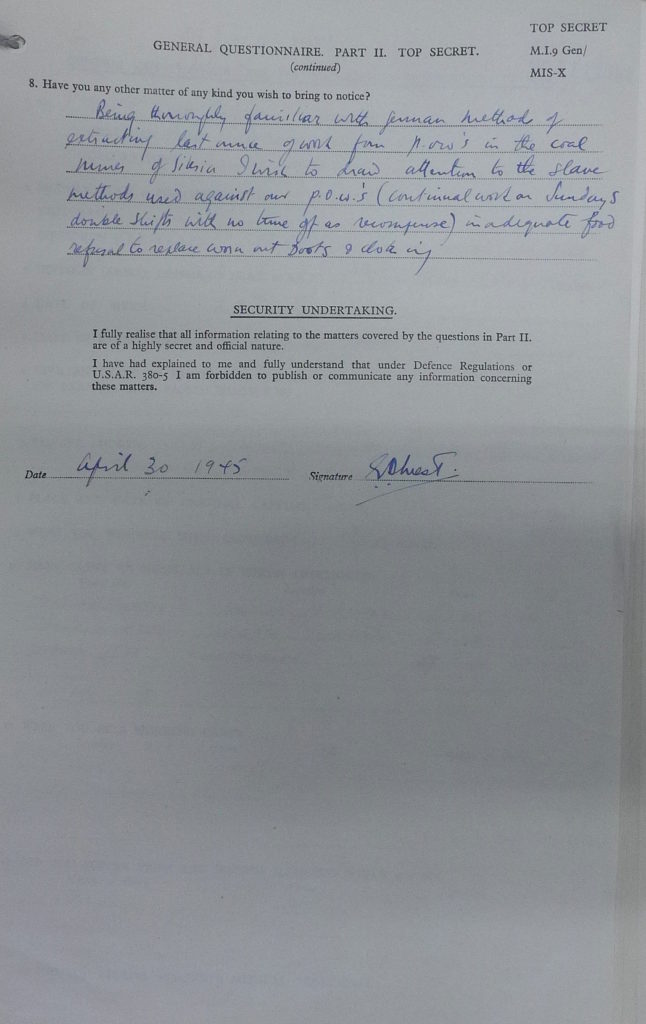 My fathers’ Liberation Questionnaire dated 30th April 1945. This was probably completed in a reception area either in Germany or Belgium.

On 5th July 1945, after V.E. Day but before the final defeat of the Japanese, Eric West was posted to 45th Division of the British Army, 203 Field Regiment, Royal Artillery.

On 7th September 1945, at the age of 26 years, he then transferred to the R.A.O.C. (Royal Army Ordnance Corps) and was based at POW Camp 167, Shady Lane, Stoughton, near Leicester, which held German POW’s and where his skill as an interpreter was used.

The entrance to 167 POW camp Shady Lane. It is now reclaimed as an Arboretum. No traces of the old POW camp remain. Some locals remember the camp and the German POWs who used to help in nearby farms and gardens.

Eric West was finally demobilised on 18th June 1946, having been promoted to Staff Sergeant.  It was while working at POW Camp 167 that Eric West decided to embark on a career in Medicine. He remained in the Reserves until his 40th birthday in 1959.

It says: ‘was a POW for 5 years….was promoted to S/Sgt Interpreter in which capacity he has given complete satisfaction having shown himself able to cope with both the linguistic and administrative sides of his work. He has also made good use of facilities available to fit himself for his proposed career in Medicine for which he appears to be excellently suited‘.

Gunner Eric Johnson’s journey was also though Czechoslovakia, he was also liberated by American forces and flown to Rheims before his repatriation to England at approximately the same time. Gunner Johnson was also transferred into the RAOC.

Captain Sirkett wrote to Mrs Sirkett on 9th May 1945 having been liberated by American forces and flown to Brussels, where he was looked after by Canadians.

Arrived at Brussels this evening- too full a day to put into words, but God bless you and as you know I am only waiting until I am able to be with you again- probably in a few hours- you will know how wonderful that seems.

We have had a wonderful reception here by the Canadians after being flown here by the Americans. I have been secretly in tears all day. ‘V’ Day too I hope you will all be having a celebration too.

What a pity I am unable to phone from here, but it an all wait until I see you. I feel I have so much before me – you + father + the aunts + then Gerald and the family. Love Paddy

Very sadly it appears that one 140th Regiment soldier died while still in captivity at the end of his Long March, having arrived in Southern Germany, towards the end of World War Two and after enduring three months of forced marching.

Gunner George Lucas, a 45-year-old married man from Shifnal, Shropshire, died on 22nd March 1945 at Stalag IXB, 30 miles to the east of Frankfurt and nine days before the camp was to be liberated by the American Army. This was a daring, behind the lines, humanitarian raid led by Lt Col Walter Fetterley of the 44th Infantry Division as conditions at this camp had deteriorated badly.

Gunner Lucas was reinterred to the the Durnbach Commonwealth War Cemetery in Bavaria in 1947.