The French army had managed to stall the German advance temporarily and so Macforce was disbanded.  New orders were given by Lord Gort to the commander of 145 Brigade, 46-year-old Brigadier Hon. Nigel Fitzroy Somerset, to proceed south from his position in Nomain (south of Lille) to Cassel and Hazebrouck.  This ad-hoc force, 145 Brigade under the command of Brigadier Nigel Somerset, was to form the ‘Somerforce‘.

The situation was by this stage very fluid, the order to create Somerforce at Cassel was given at 15:00 hrs on the 24th May, and had followed a quickly rescinded order delivered at 07:00 hrs on 24th May for Somerset’s 145 Brigade to head to Calais. 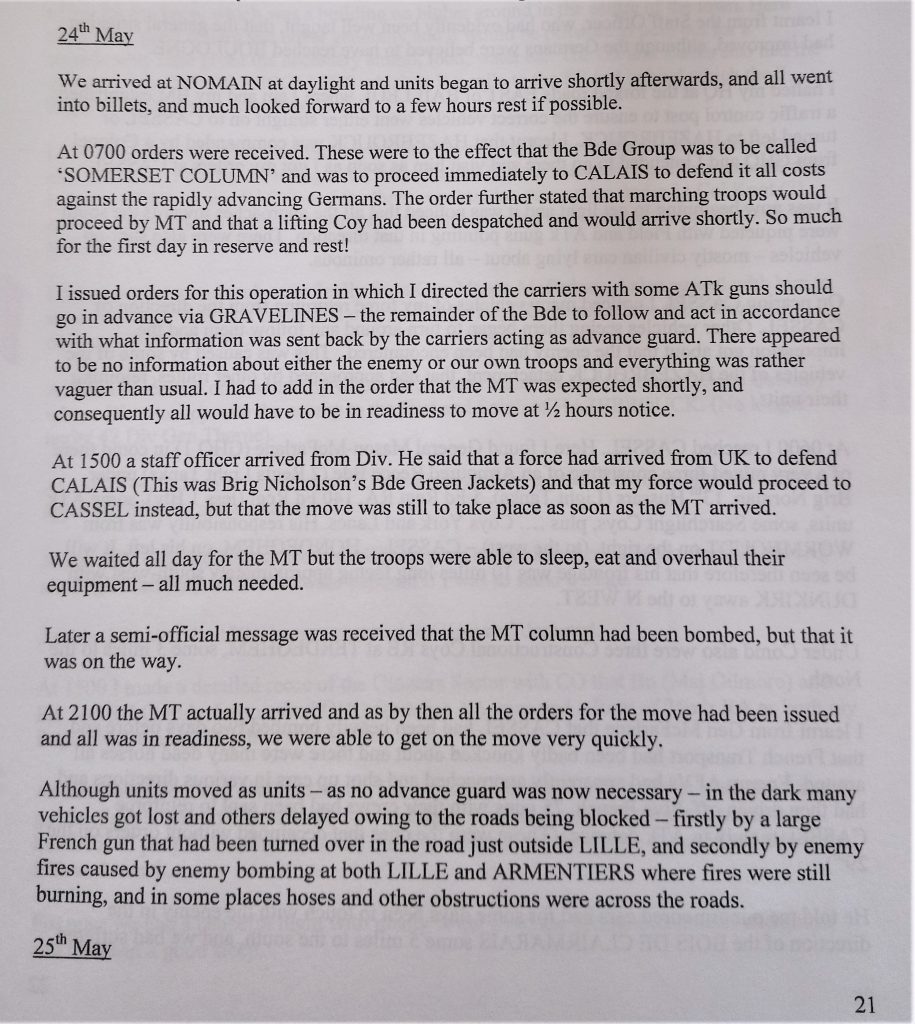 Unbeknown to its commanders at the time, Somerforce’s task was to hold Cassel at all costs in order to delay the German advance while the Operation Dynamo evacuation was underway at the beaches in Dunkirk.

The men and equipment of 367 Battery 140th Field Regiment moved Northwards along the D933 road from Nieppe forest, via Caestre, to Cassel. 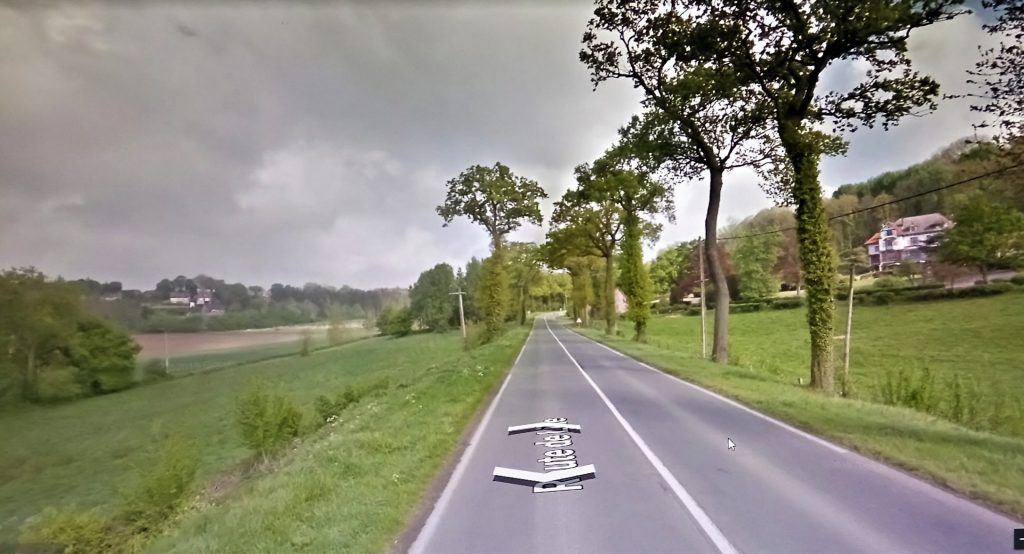 As they arrived, Brigadier Mason-Macfarlane, with a smattering of French anti-aircraft artillery, had been in command of the garrison.  Cassel had been heavily bombed with civilian and French army casualties and an itinerant civilian population that included many Belgian refugees.

The 140th Regiment’s War Diary describes the Regiment’s arrival at Cassel on 24th May and the dispositions of the troops.  The 140th Regiment’s 367 Battery would have been one of the first B.E.F. units to arrive at the town, and as the main German thrust appeared to be coming from the South West, the Regiment’s supply depot was set up away from the main garrison at the village of Eecke, a few miles along the D916/933 road near St -Sylvestre-Cappel.

Apparently, some annoyance was expressed by the other artillery units that, by arriving first, the 140th Regiment had been able to choose the best available gun positions.

Brigadier Nigel Somerset’s force, en route from Nomain and shortly to take over command at Cassel, arrived at 06:00hrs on the 25th May. 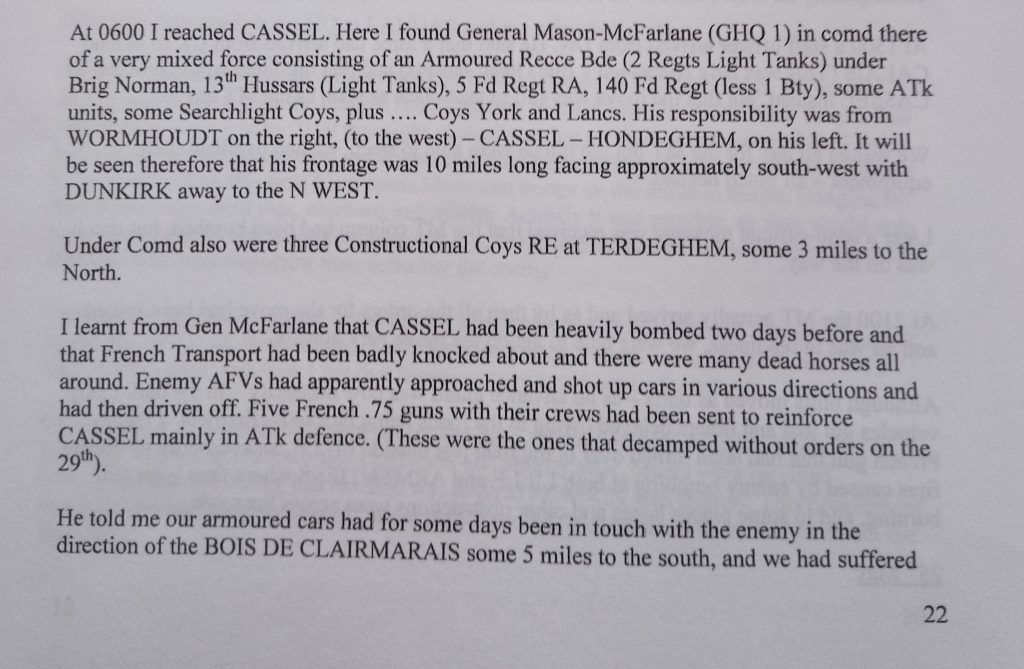 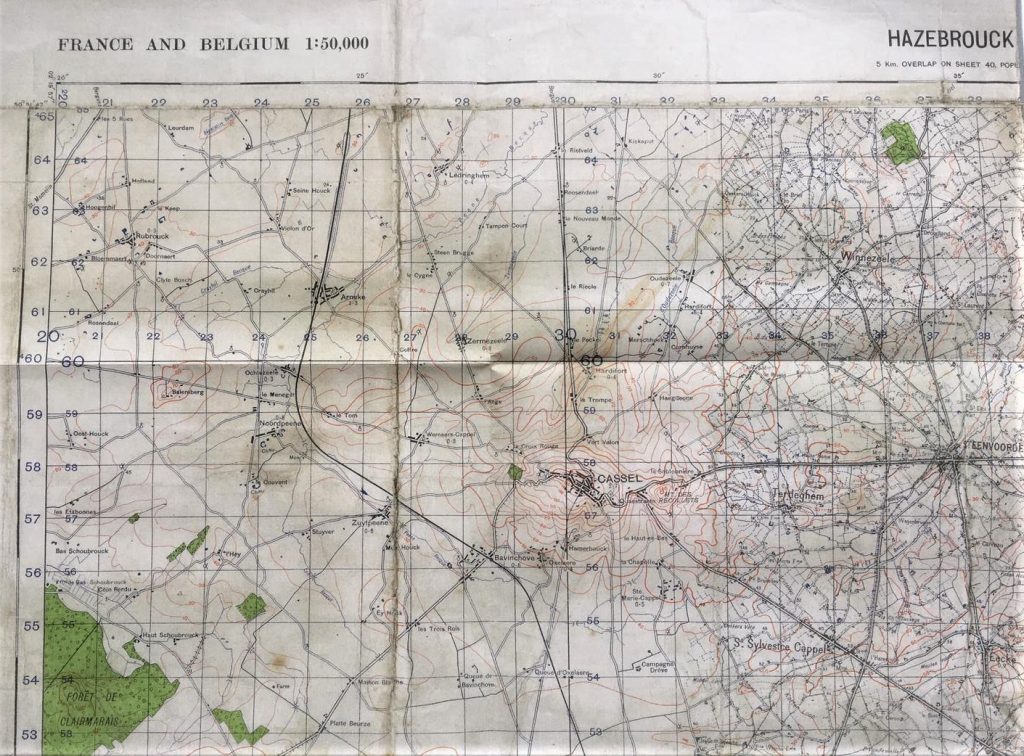 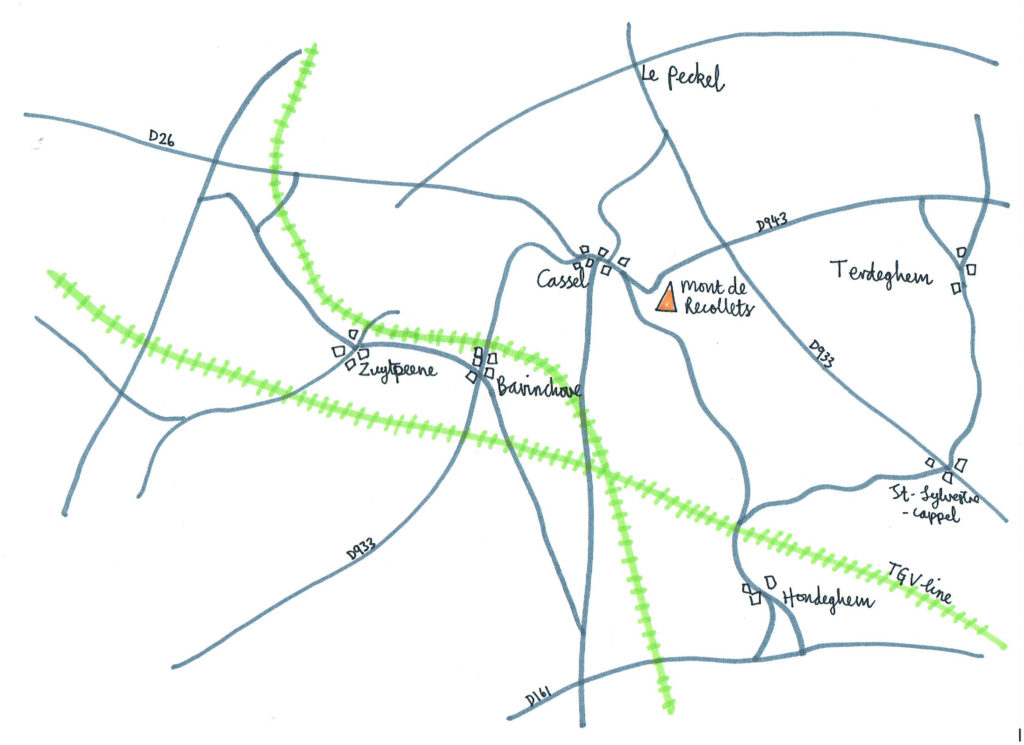 Sketch map of Cassel and surroundings

Regimental HQ was set up in the Chateau Masson on the D916 road, just to the South of the junction with the D948.  This house still stands and is now known as the Grande Maison Reception, an event and reception centre.  In 1940, it was also used as a Field Hospital, and some of the hospital equipment is still to be found on the upper floors. 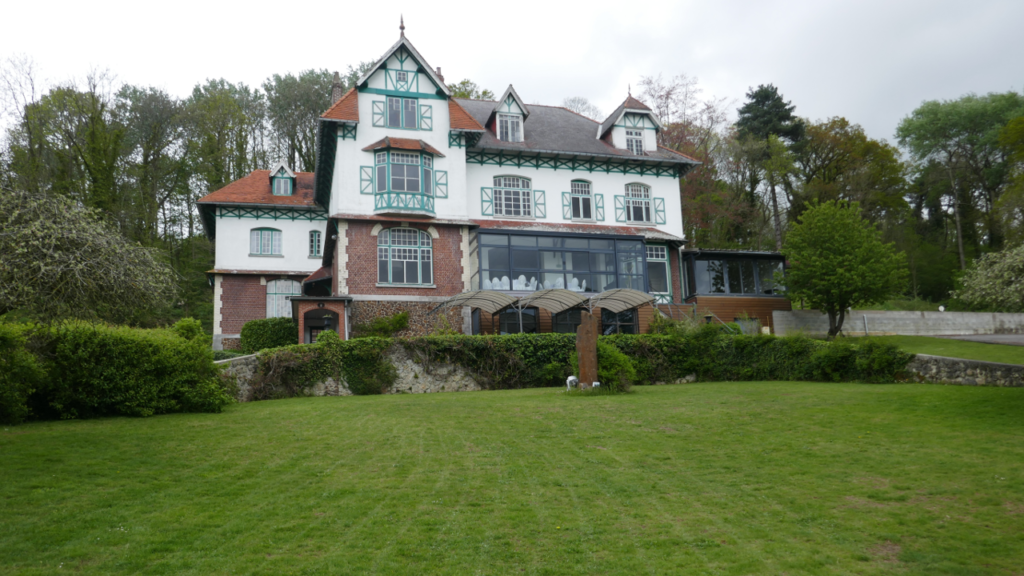 Regimental HQ at Chateau Masson on the approach road to the South-East of Cassel, this was over-run and HQ had to be re-sited in the town centre. 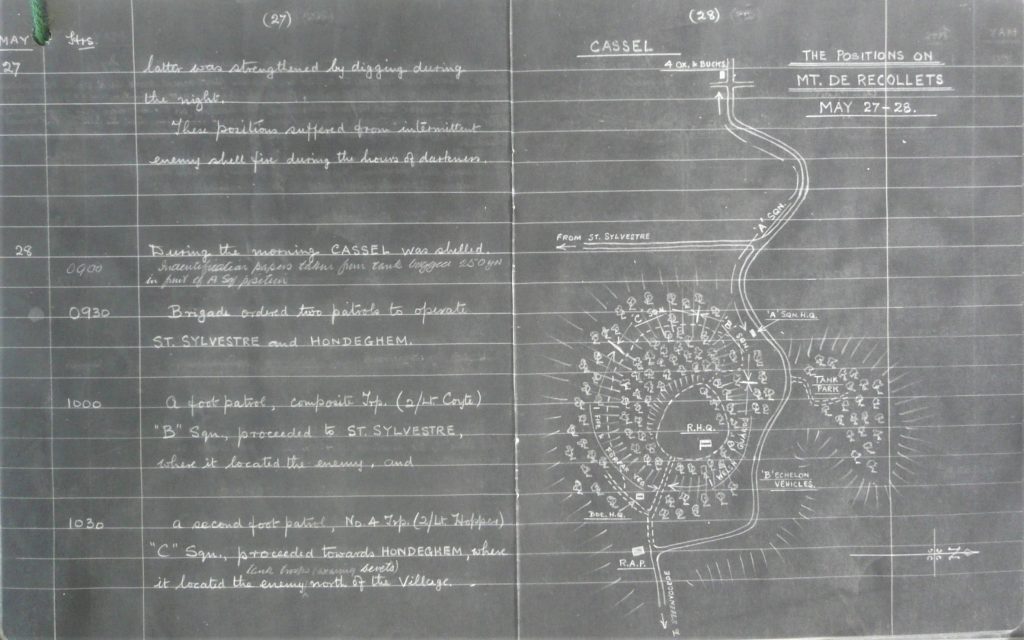 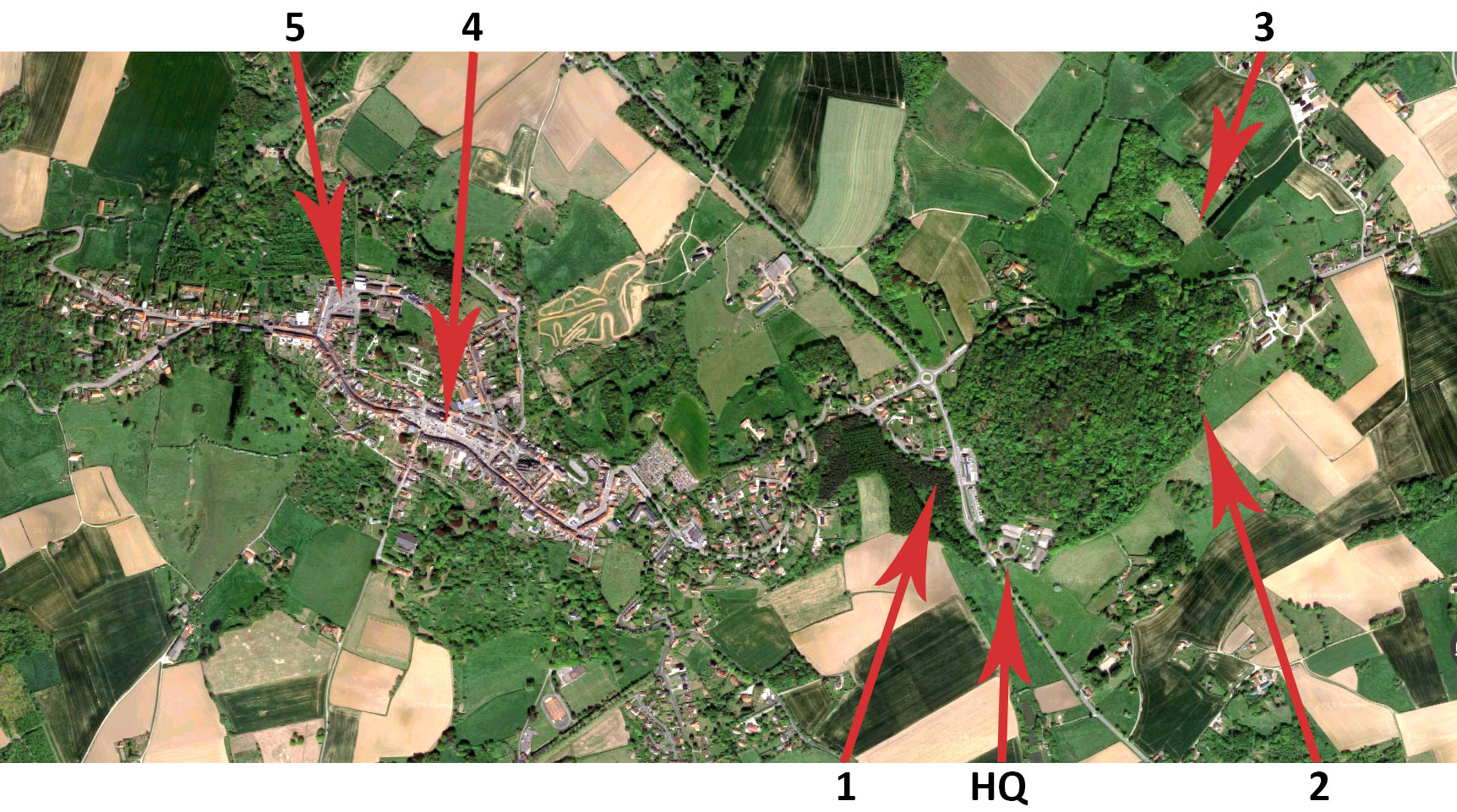 Satellite map of Cassel, courtesy of Guided Battlefield Tours Ltd, showing positions of Regimental Headquarters at Chateau Masson (marked HQ), and ‘F’ troop gun positions at HQ and at the D948 roadside – position (1), and two troops in the woodland towards the South – ‘D’ Troop (2) and North – ‘E’ Troop (3) of the wooded area representing the Mont des Recollets.

The Regiment subsequently moved their guns into Cassel town itself, including the Central Place (4) and the Place du Gen. Vandamme (5). 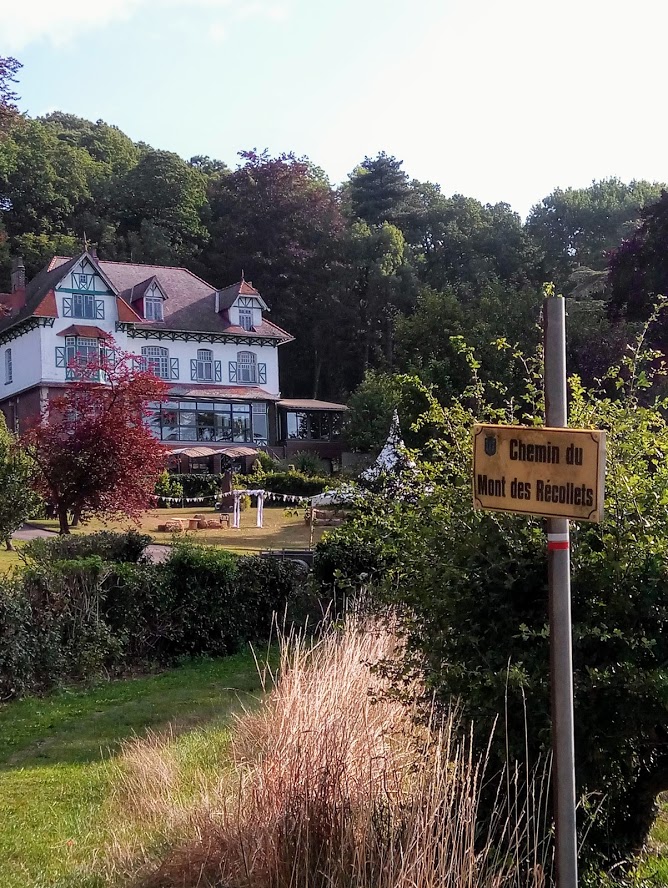 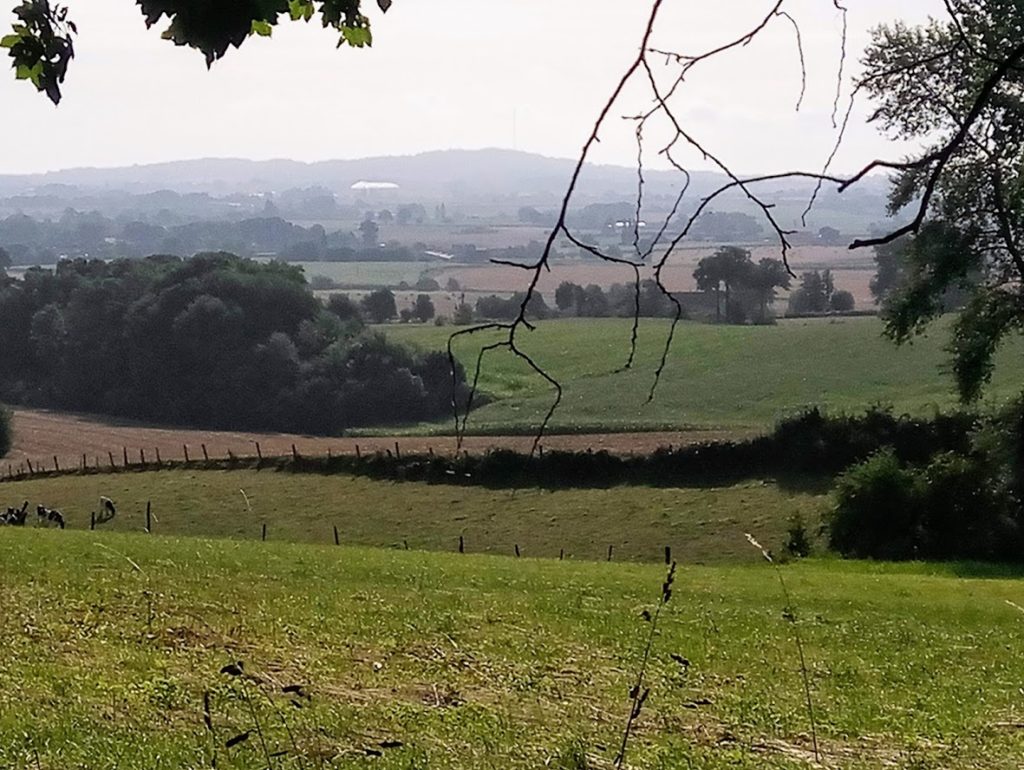 View from the Southernmost gun position looking to the South-East, Monts des Cats visible in the distance. I suspect this site was ‘D’ Troop and was most likely where my father Eric West was positioned. 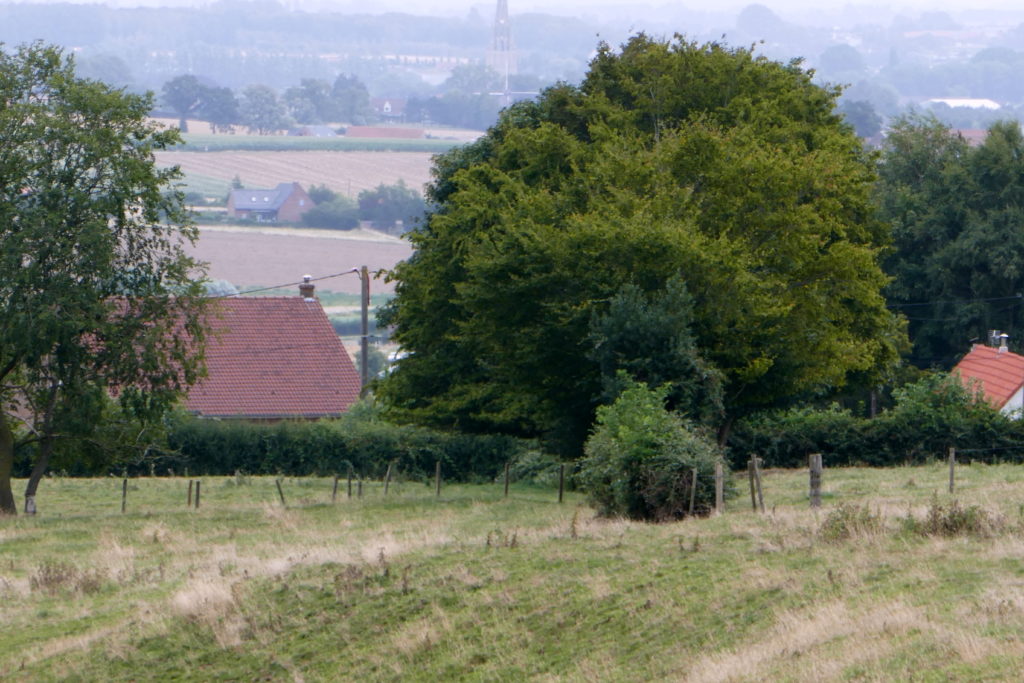 Somerset’s Cassel garrison consisted of two Infantry battalions, the 4th Oxford and Buckinghamshire Light Infantry (OBLI) and the 2nd Gloucestershire Regiment, who were to form the core of the defence of the town.  The Cassel garrison also consisted of the 143 Field Ambulance Unit, the East Yorkshire Yeomanry, two companies of machine gunners from the Cheshire Regiment, various Royal Engineers and Major Cartland’s 53rd (Queens Own Worcestershire Hussars) Anti-Tank Regiment.  Major Ronald Cartland was a serving Conservative Member of Parliament for a Birmingham constituency, and had been a supporter of Winston Churchill during the appeasement crisis of 1938-9.

Unaware of the whereabouts, and the proximity, of the German panzers Brigadier Somerset set about organising the rather disparate forces now under his command.  His War Diary describes the allocation of infantry and artillery units throughout Cassel and the surrounding 10 mile front. 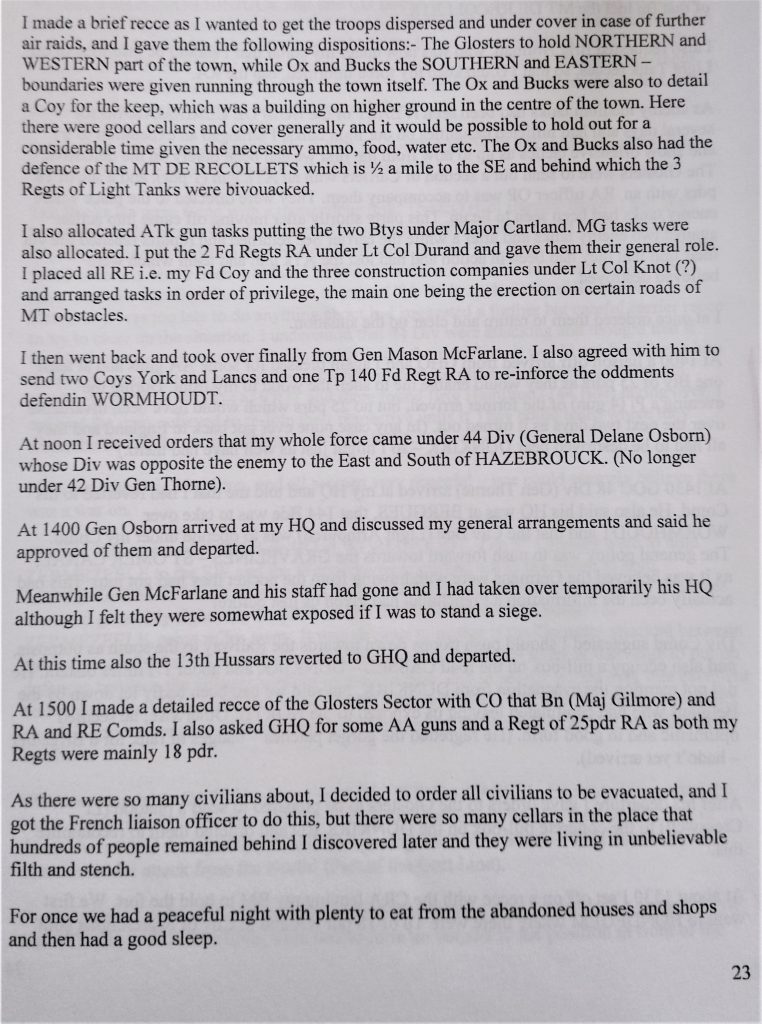 Somerset also made a decision to evacuate the remaining civilian population, who were suffering from a lack of food and living in considerable squalor under fire.  Suspicion remained about the possibility of ‘5th Columnists’ particularly among some of the Flemish refugee population, as referred to in the Gloucester Regiment’s War diary: – 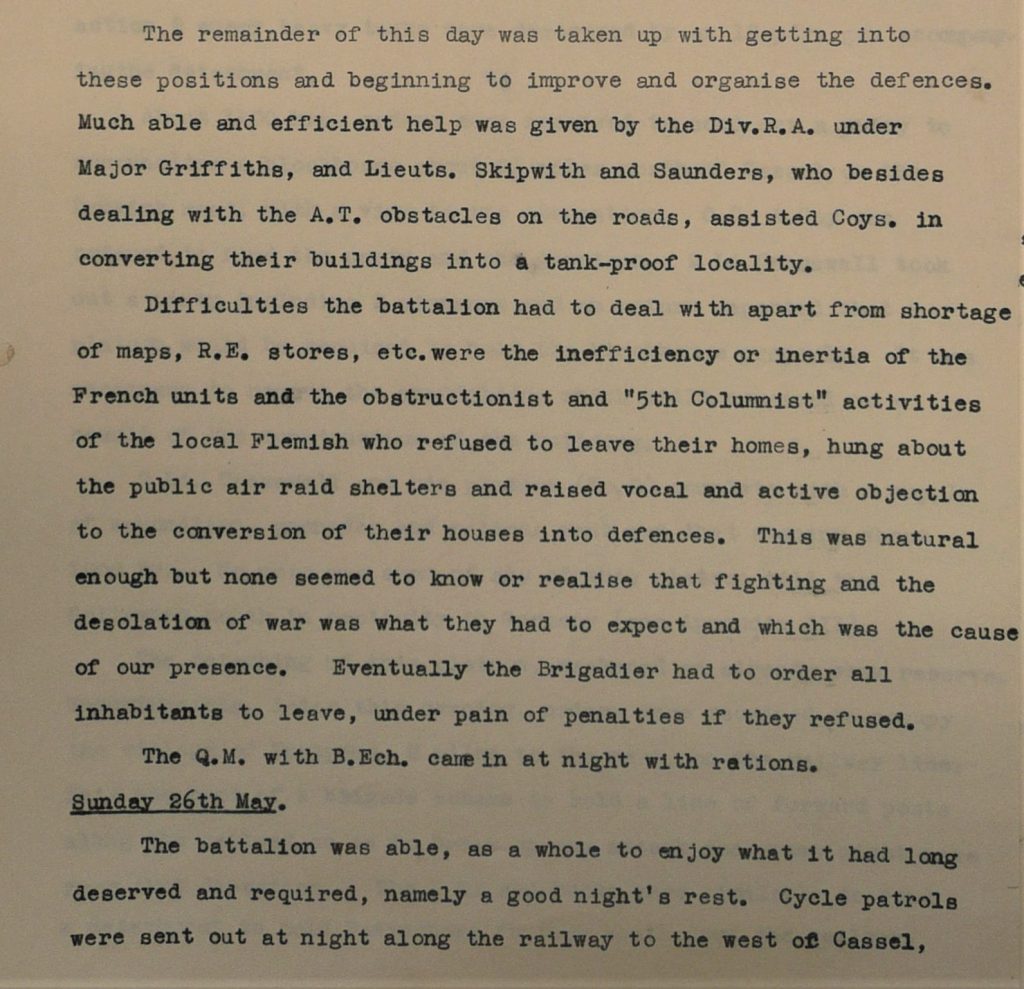 Fortunately the day before, 24th May 1940, after a British tank counter-attack at Arras that had made German commanders aware of the potential danger of outstripping their supply lines, Hitler had issued his ‘Halt Order’, thereby buying Somerset vital time to organise the defence.

British troops arriving at Cassel soon realised that the town had already suffered badly from aerial bombing.  Much of the town was badly damaged and the men were met with the grisly sight of a grimacing dead horse and dead French soldiers scattered across the cobbled road as they climbed the curving D933 road to the town centre, the bend on the road by the cemetery was dubbed the ‘Dead Horse Corner‘ 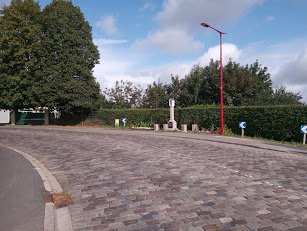 Cassel as a fortress

Cassel commands a hilltop position that straddles the D916 road, one of the main routes to Dunkirk.  Mont Cassel, at 250 foot, together with the neighbouring Mont des Recollets, is by far the highest and most prominent feature for miles around. During World War 1, the town had been successively the headquarters of Ferdinand Foch as commander of French armies in the North and of General Herbert Plumer as commander of the British Second Army. 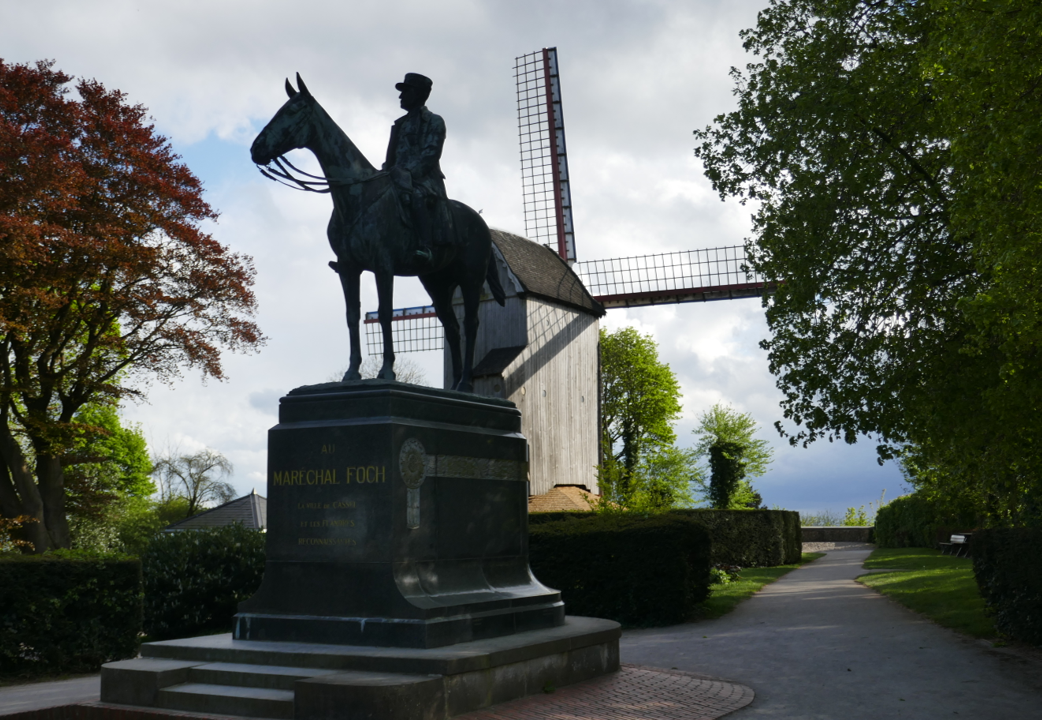 Statue of Marechal Foch on the summit of Mont Cassel

Cassel was rapidly made into a tank-proof fortress.  Positions (mainly in town houses and outbuildings) were strengthened, windows were blocked, curtains and glass removed, roads were barricaded, trenches dug, and sandbagged positions were created.  These preparations, and the damage to property, created friction with civilian residents who were eventually ordered to leave and evacuated by bus.  French machine guns and anti-tank weapons and detachments were utilized to assist in the defence.

Machine guns, however, were often hampered by lack of good fields of fire; while the 140th Regiments’ 18-pounders found themselves limited owing to difficulty achieving sufficient elevation owing to the terrain.

The town being divided approximately into two halves by a north-south grid line; the 4th Oxford and Bucks Light Infantry (OBLI) held the East of the D933/D218 junction; the 61st Gloucester Regiment held the Western sector, including the gentler slopes onto the Flanders plain. 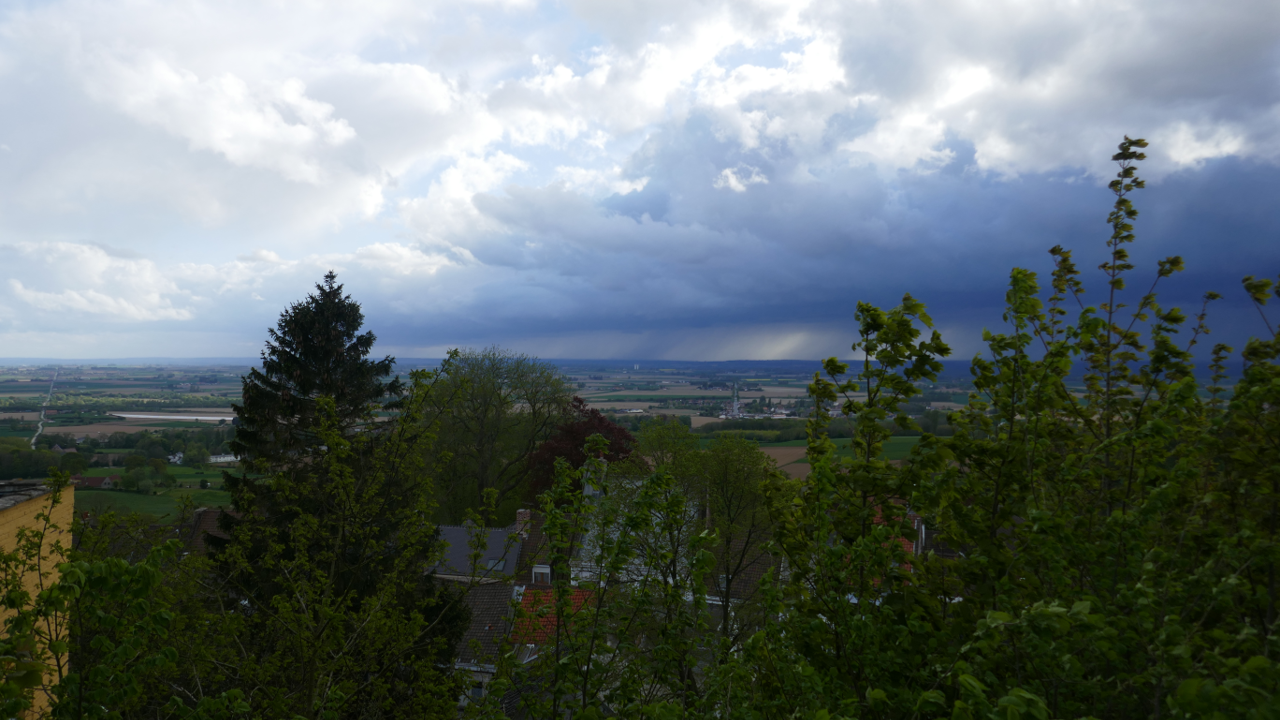 Summit of Mont Cassel looking North towards the coast and Dunkirk

Later, on the 26th May, No. 8 Platoon under 2/Lieut. R.W. Cresswell was sent to occupy a partially completed blockhouse at Le Pequel about two miles out of Cassel on the D916 road to Dunkirk. 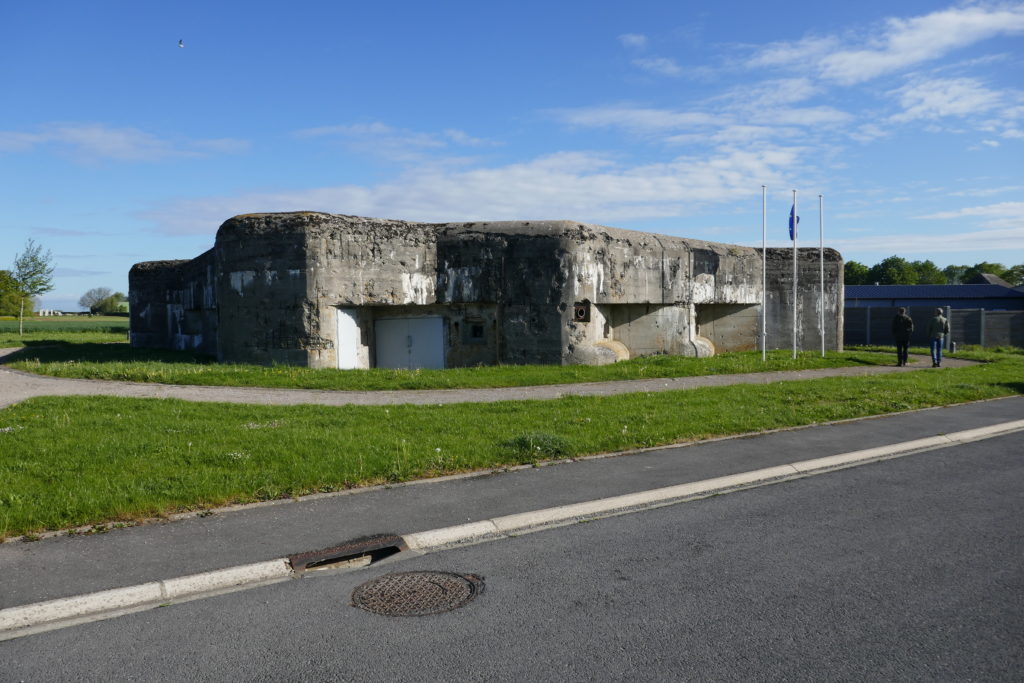 Lt Cresswell’s heroic defence of this isolated Bunker position has become part of the legend of the Dunkirk story and the rearguard action at Cassel.

The rest of “A” Company was sent to occupy the village of Zuytpene, on the railway line to the West of the town.  A company of the 4th Oxford and Bucks was similarly sent out to occupy Bavinchove, to the South of Cassel with a station and level crossing at the junction of the railway and the D933.

Calm before the storm

The day of 25th May was relatively quiet, reflecting the pause in the German advance following the 24th May Halt Order.  It provided an opportunity for the Somerforce to continue preparations to defend the town.  The whereabouts of the Germans were still unknown on 26th May and the day was largely engaged in reconnoitering the surrounding countryside. 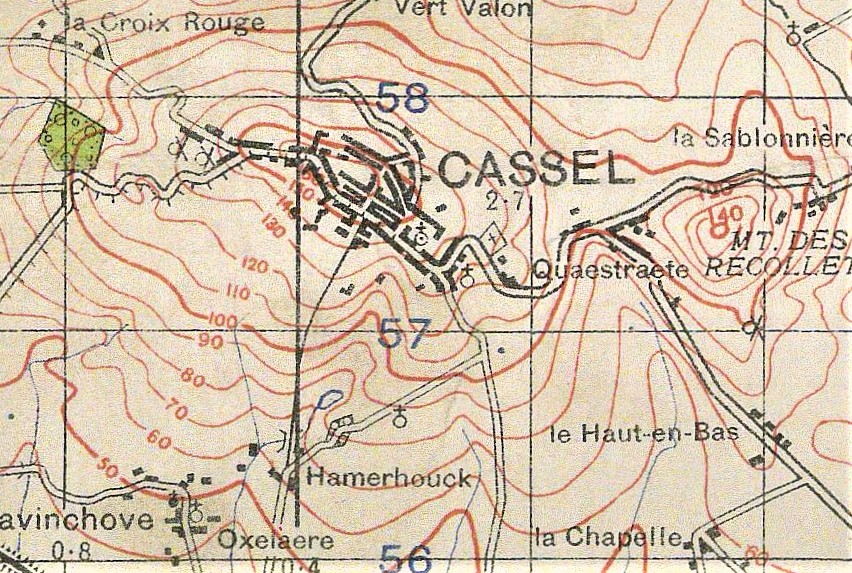 British Military map of Cassel 1940, with thanks to Barry Ross 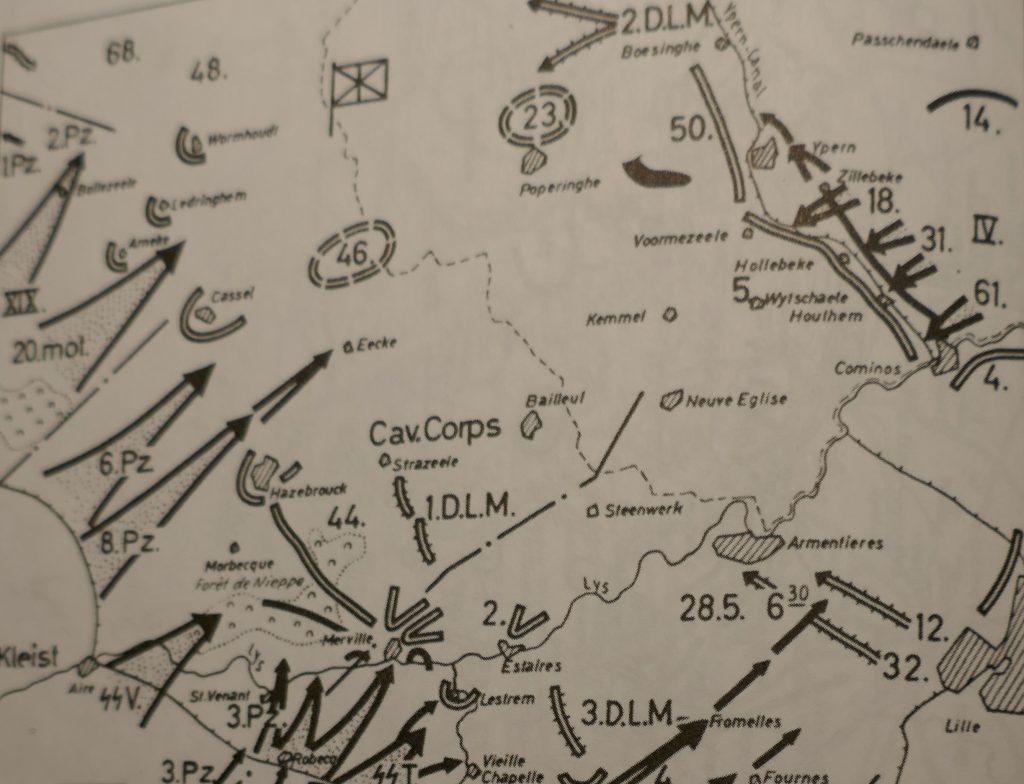 German situation map 26th May 1940. British fortifications at Cassel, which the Germans intend to circumvent by passing to the South (6th & 8th Panzer Army) and to the North. From ‘Dunkirk-German operations in France 1940‘ by Hans-Adolf Jacobsen

‘From Regimental H.Q. we could see much shelling and bombing activity in HAZEBROUKE. CASSEL was again heavily bombed. At the same time there was a big battle going on to the South. I cannot remember any movement of enemy Infantry and Tanks being reported during the day in the CASSEL area.’

‘This was a peaceful day. There were some deserted French 75 mm. guns in CASSEL for some reasons unknown’.