By the 26th May 1940, 367 Battery’s guns were ready, positioned at Chateau Masson (Regimental HQ), on the Mont St Recollets and at various sites around the perimeter of Cassel to face the expected German advance from the South-West.

On the 27th May, British cross-channel ferries began the evacuation of the first B.E.F. troops from Dunkirk harbour.  The Luftwaffe started intense bombing raids of Dunkirk, however 7,669 B.E.F troops were successfully evacuated. 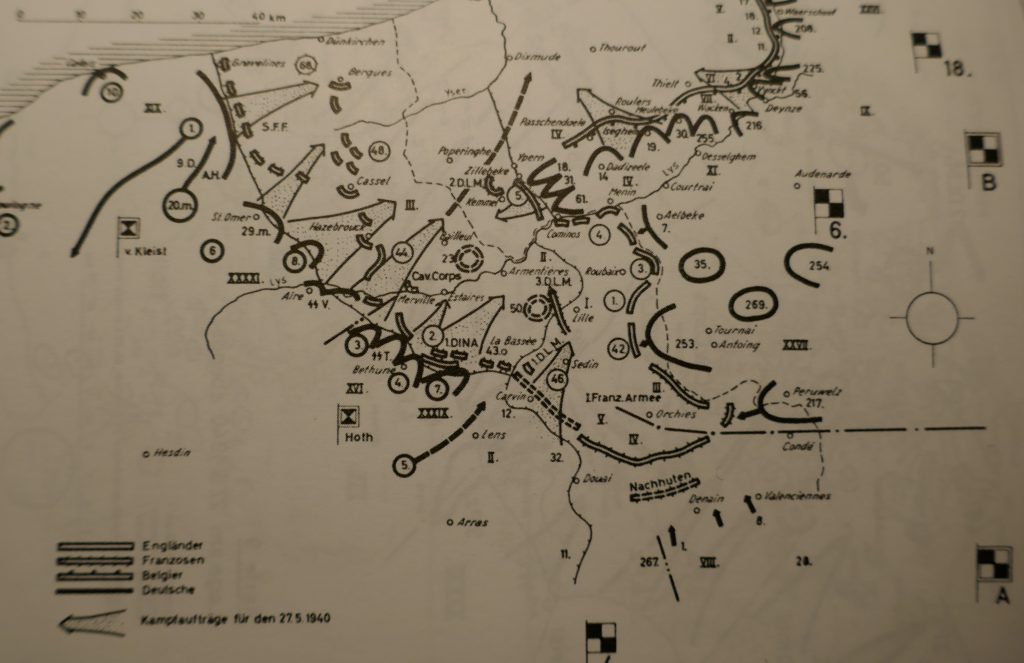 German positions on 27th May 1940. From ‘Dunkirk -German Operations in France 1940‘ by Hans-Adolf Jacobsen

Also on 27th May, the B.E.F’s situation deteriorated dramatically.  There had been numerous developments across the entire Flanders battlefield. The Belgian King Leopold III had announced his intention to surrender to German forces and as a result of the Belgian collapse, the British escape corridor to the North-east had suddenly became extremely vulnerable.

King Leopold’s announcement did not prevent a massacre of between 86-140 Belgian civilians that took place at the town Vinkt, near Ghent at the hands of regular German Army troops.

Also on this day, about 20 miles to the South of Cassel, at Le Paradis farm near Bethune, 97 men of the 2nd Norfolk Regiment suffered a massacre at the hands of SS troops.

In Cassel itself, early in the day and somewhat unwisely given the proximity to the front line, the British and French High Command held a high level meeting at the Hotel du Sauvage.  Lieutenant General Sir Ronald Adam represented the BEF and Général Bertrand Fagalade the French. 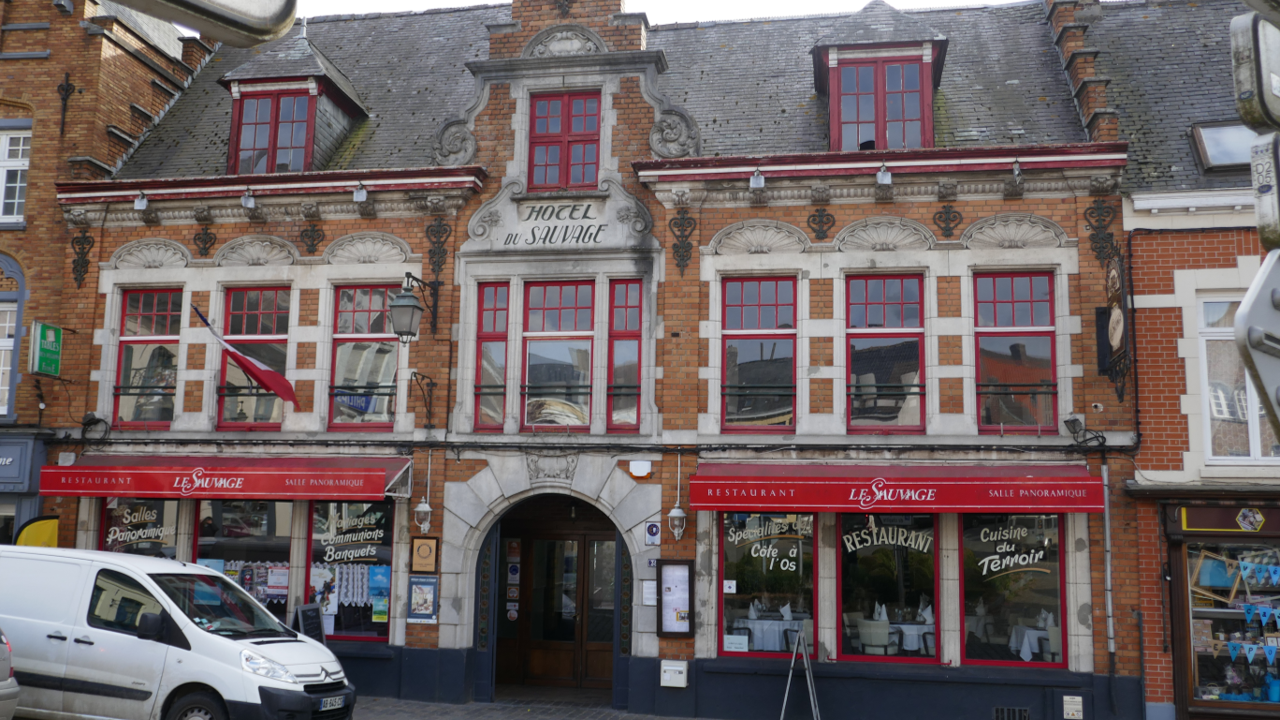 At the meeting the British first informed the French, in coded terms, of their intention to evacuate the entire B.E.F.  However, the meeting had to be terminated after less than an hour due to shellfire and the commanders had a lucky escape.

After heavy bombing from the air and continuous mortar fire throughout the morning, a major assault then began on the town from the South and South-east.  German tanks of the Sixth Panzer Division broke into the defences in a number of areas on the more gently sloping ground approaching Cassel but were eventually driven off.

There were heavy casualties, with D Company of the Oxford and Bucks reduced to less than 50 men.   The nearby ‘picket’ village of Zuytpeene was surrounded and eventually surrendered and Bavinchove was captured after heroic defence had taken place in both villages. 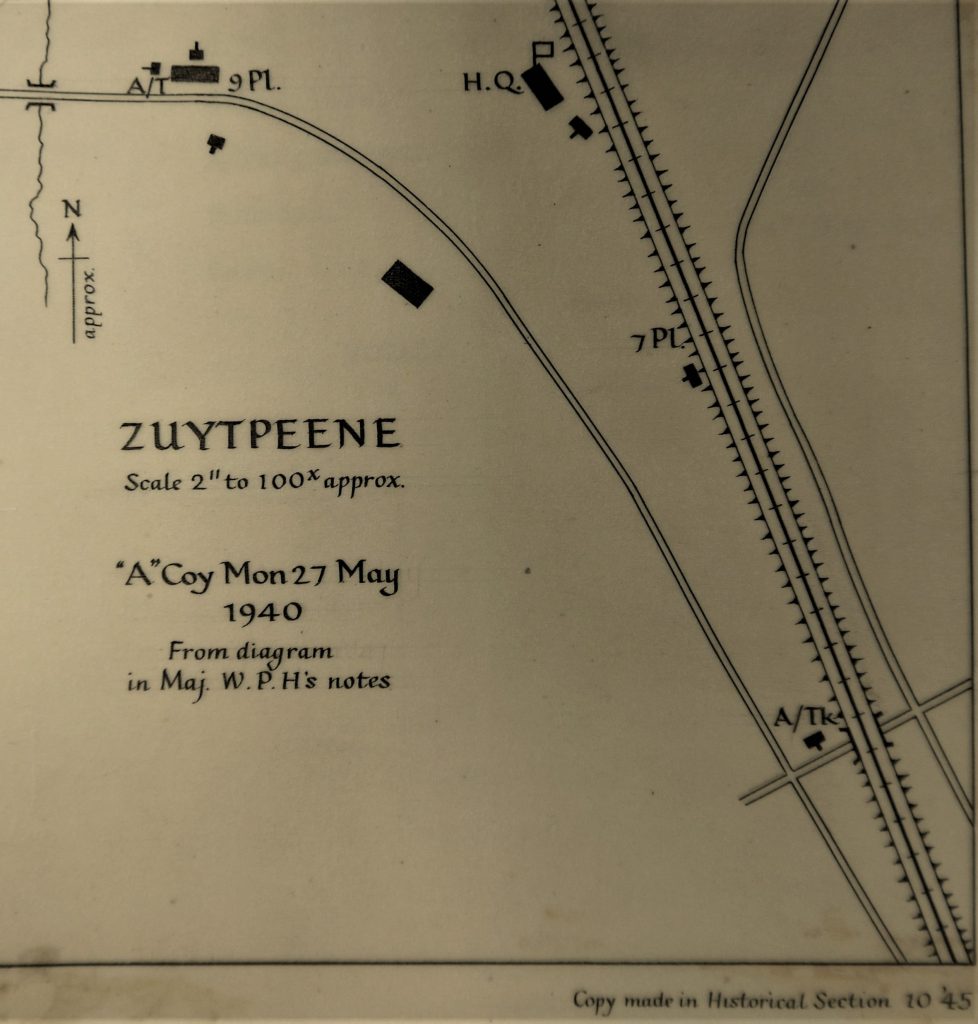 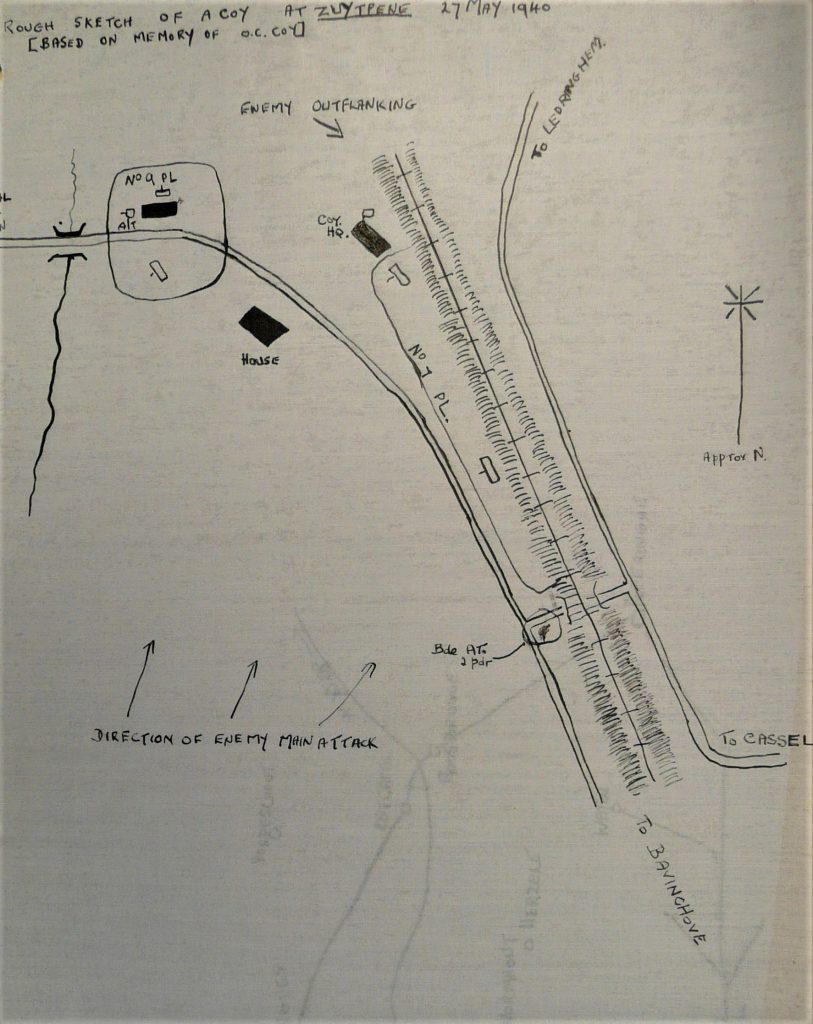 Glos. Regt. War Diary. Attack on Zuytpeene, with thanks to David Hineson

In the attack of 27th May, the Chateau Masson HQ, which was on lower ground the the East of Cassel, suddenly became part of the front line (‘FDL’) and a gun was placed on the road to act as an anti-tank defence. The Regiment was in action here and helped to knock out five tanks, while HQ personnel also helped to fight off German infantry in the first of the assaults on Cassel. 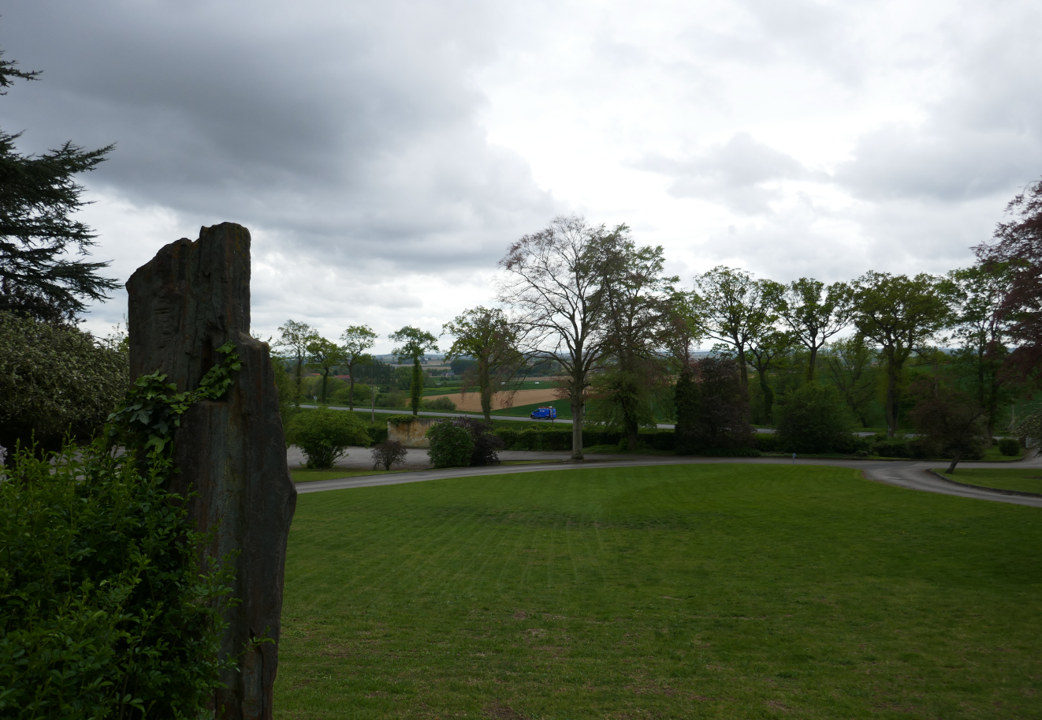 View from the frontage of Chateau Masson HQ looking towards the D916 Road, this area became part of the FDL (front line) and was eventually over-run by advancing German troops. 367 Battery claimed five panzer tanks destroyed during this engagement.

At around midday ‘F’ troop of the 140th Regiment, led by Captain Ronald Baxter with Lieutenant Jack May, Lieutenant Charles Bennett, Sergeant Harold Swindle and Bombardier Arthur Ross, were engaged in a short-range duel with German Panzer tanks that were attempting to advance Northwards along the line of the D916 road in the gap between Cassel and Mont des Recollets.

The engagement resulted in Sergeants Goodrum and Swindle’s deaths, and both Lieutenant May and Lieutenant Bennett were seriously injured.  Gunner Ernie Pilbeam later recounted that it was a premature explosion of a shell that had killed Goodrum and Swindle.  It had a faulty fuse and detonated immediately it left the gun muzzle.

Lt. Jack May was to escape at Dunkirk but died on 21st June 1940 of these, and subsequent, injuries.  Lt. Charles Bennett was captured on 30th May and spent the remainder of the war as a POW.  Sergeant Harry Swindle has an unknown grave and is commemorated at the Dunkirk Memorial.  Bombardier Arthur Ross was injured by rifle fire during the breakout on 30th May and died in captivity on 3rd June 1940. 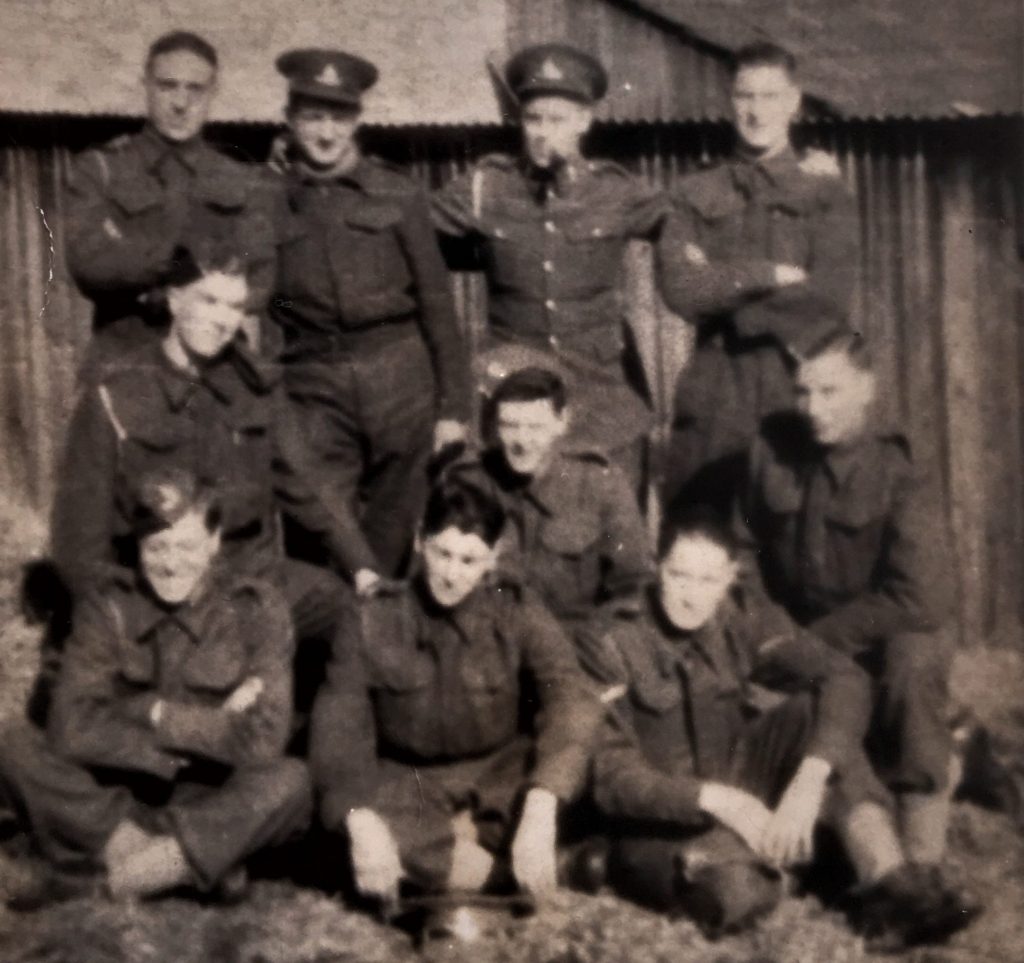 The War Diary comments that the Northern Troop, on the other side of the Mont des Recollets and commanded by Lt Col Odling, was unable to assist in the defence of the HQ and ‘F’ troop’s gun battery position.  Their guns were unable to elevate their fire sufficiently over the rising ground between the two positions. 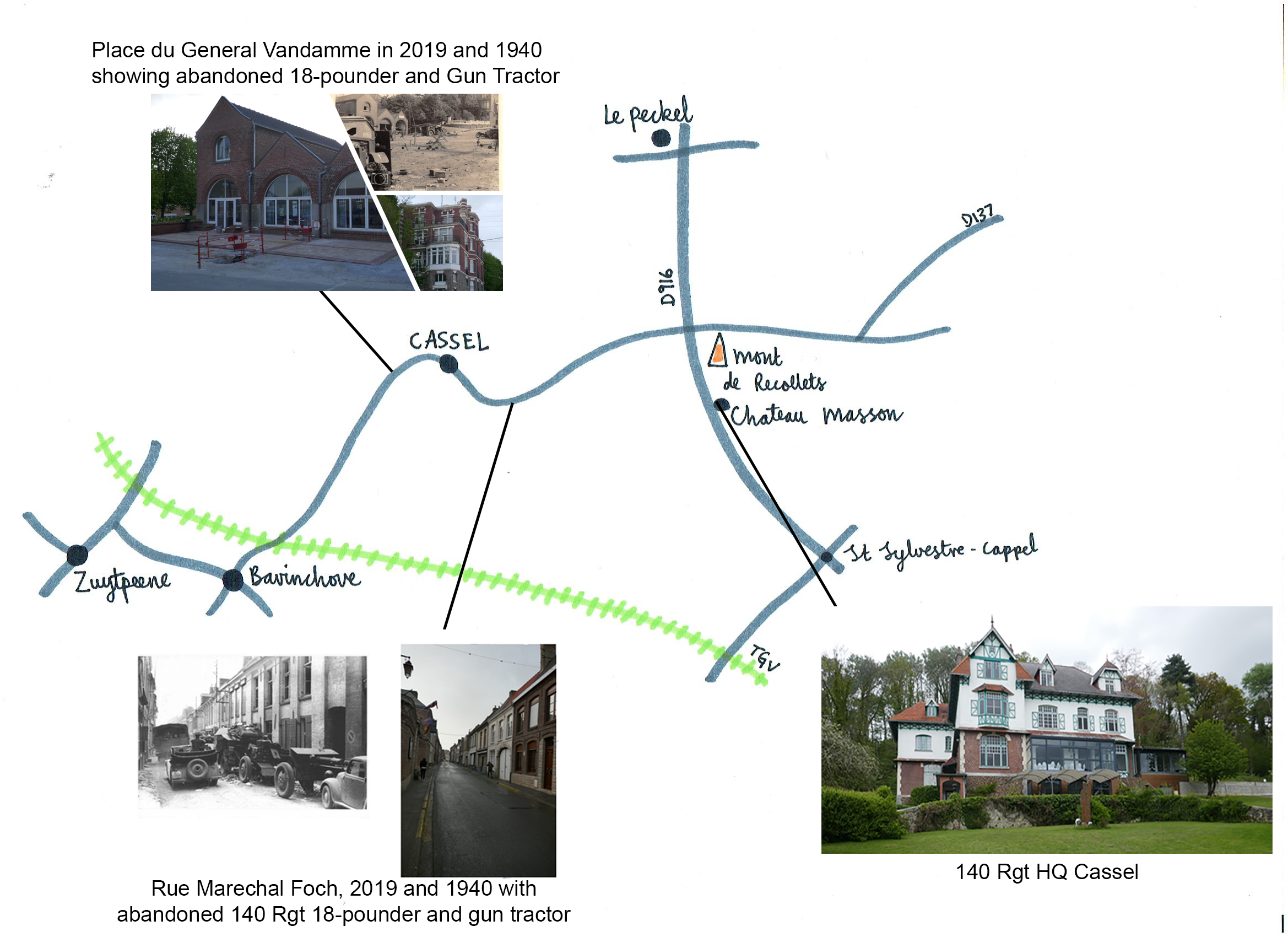 Brigadier Somerset describes the multiple German attacks of 27th May in his War Diary.  He refers to the Panzer attack on 140th Regiment’s HQ and states: ‘Heavy tanks came up under what cover they could get and opened fires with all weapons. They appeared to be trying to get a footing ion the col between Cassel and Mt. de Recollets. The fire was very accurate and continuous and their tanks were very daring- as a result many were knocked out. They imagined that we should bolt if they were persistent enough as had happened elsewhere.’ 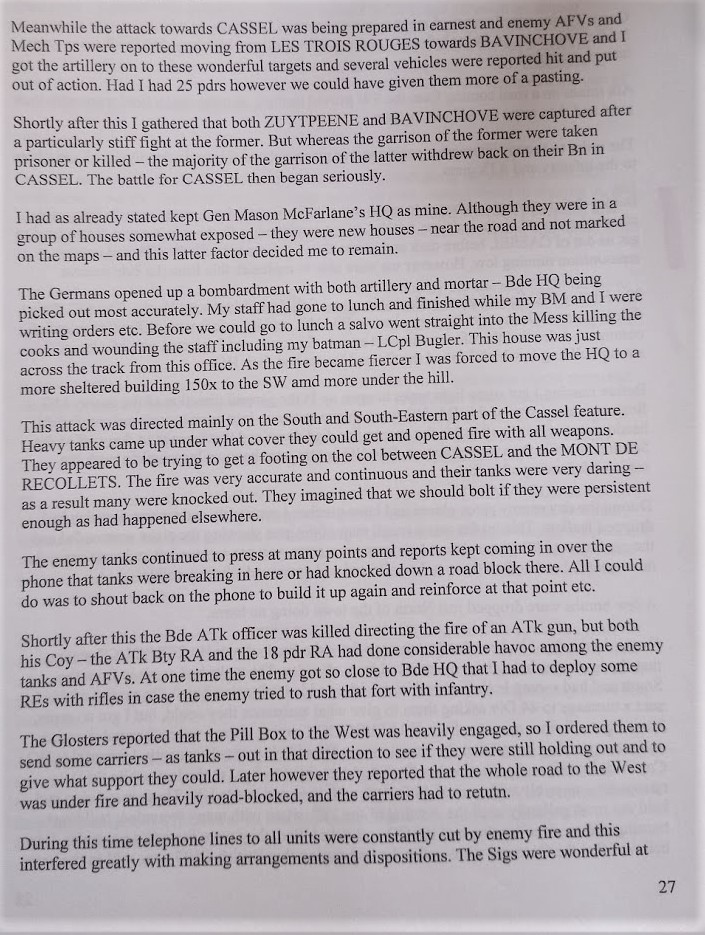 Somerset’s War Diary describing the events of 27th May 1940

Later in the day, Chateau Masson was eventually over-run and the HQ staff and southernmost gun troops had to relocate with Brigadier Somerset into the higher ground of the town centre.

Enemy attacks also dispersed the Regiments supply depot and transport based at the village of Eecke (about 5 miles to the East of Cassel) and by the morning of 28th May the Regiment had re-sited its guns into the garrison of Cassel town itself.

143rd Field Ambulance arrived in Cassel on 25th May.  Corporal Stanley Watson, age 46 years, of 143rd F.A. wrote about his experience, after his successful escape at Dunkirk. He described being under mortar, and possibly air attack, at a RAMC Dressing Station in Cassel.

Corporal Watson wrote: “I am one of six left. I was blown out of my dressing room, which was in a barn, at a place called ‘Cassel’ which was blown to dust, there [some] got badly wounded and I got away with a few splinters which are now finished” 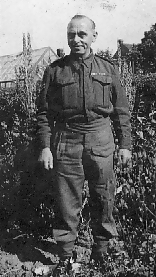 Corporal Stanley Watson, RAMC. July 1941. With thanks to Angus Watson

143 Field Ambulance produced an original sketch map, and chronology, of their  advance into Belgium on 12th May 1940, the route taken to Cassel via Steenvoorde and the 143 F.A’s escape at Dunkirk. 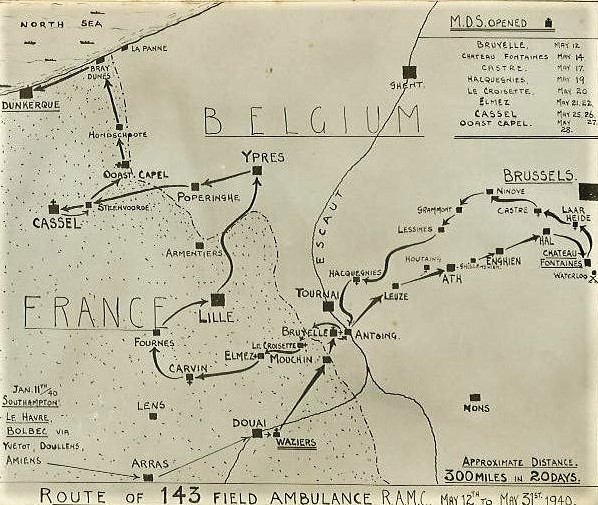 Sketch map of 143 Field Ambulance’s campaign 12th- 31st May 1940 including their route to Cassel on 25th May. With thanks to Angus Watson

Among the casualties treated by 143 Field Ambulance were a transport of 9th Sherwood Foresters whose bus had stopped in the Grand Place on 27th May and received a direct hit from a Stuka dive bomber.

Three Field Ambulance units of the 44th (Home Counties) Division were also positioned near to Cassel at the village of Eecke; their Field Ambulance HQ was in a Monastery in the nearby Mont Des Cats.

These three units, including Corporal Stanley Waldron of the 133 FA, were dispersed during the battles at Cassel and the majority of personnel of 131 &133 FA were captured by the Germans.

Corporal Waldron was to spend the years 1940-43 in Stalag VIIIB.  In 1943 Waldron was repatriated to provide medical support for other prisoners. 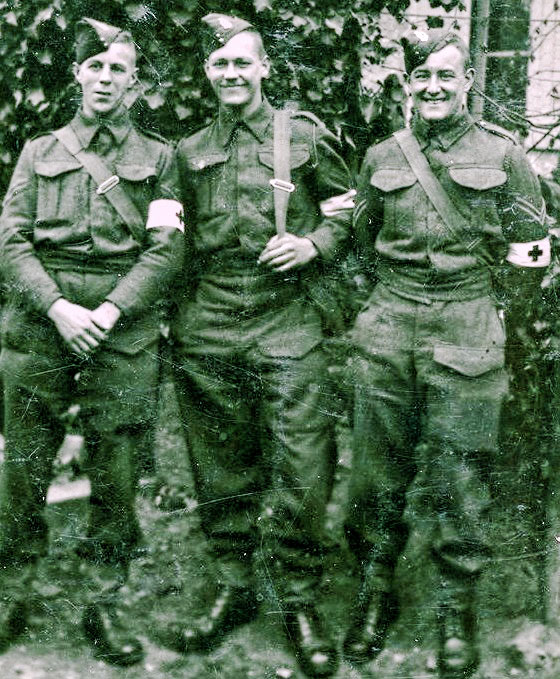 Corporals from 133 Field Ambulance. Stanley Waldron is on the left. With thanks to Malcolm Waldron

Major Christopherson’s War Diary, as ever understated, describes the 27th May as ‘a difficult and traumatic day’.

He describes how, during the course of that day, both his gun battery positions at Mont Des Recollets and the Regiments supply depot at Eecke had been overrun by German tanks.

‘In the morning the enemy attacked all along the front and broke through South of the Regimental positions. About 09.00 I personally was proceeding to EECKE where our wagon lines were situated but had only gone 200 yards when I was turned back with the information that enemy tanks were further down the road. On our front line the 2nd Glosters and 4th Ox Bucks repulsed the morning attack. Owing to a breakdown in communications and doubt as to where our troops were, we missed some fine targets although we did do a fair amount of shooting. Pressure was kept up all day by the enemy and at one time the enemy reached within 50 yards of the kind of wall that surrounds CASSEL.

At 14.00 hrs. I found Regimental H.Q. was in the F.D.L. [front line] and I had to form a post on the main CAESTRE road just outside the Regimental H.Q. with one 18-pounder covering the road [providing] Anti-tank defence and six Anti-tank rifles and Lewis Guns covering nearly 180°.

About 18.00 hrs. the Westernmost Troop and Boyes Rifles between them knocked out five tanks. The enemy entered the Officers’ Mess and took away the wireless, but although this was only 100 yards to the flank of the guns they did not attack.

Other parties from Regimental H.Q. formed a defensive line and helped the Battery to drive off an enemy Infantry attack.

During this day the Troop North of the wood [Mont des Recollets] could not fire on the attack as CASSEL Hill intervened and there was no enemy attack from the North-West, so the Troop Commander went to assist the other two Troop Commanders.

At 21.00 hrs. Regimental H.Q. and the two Troops South of the wood [Mont des Recollets] moved into CASSEL itself as the Infantry could no longer provide any protection for the guns, and Anti-Tank positions were taken up in CASSEL for all round defence.