The Battle of Cassel continues

Although there were no major infantry or tank assaults on Cassel on the morning of 28th May, there was heavy and continuous shelling.  German aircraft also dropped their iconic propaganda leaflets on the town (below) urging the defenders to surrender. 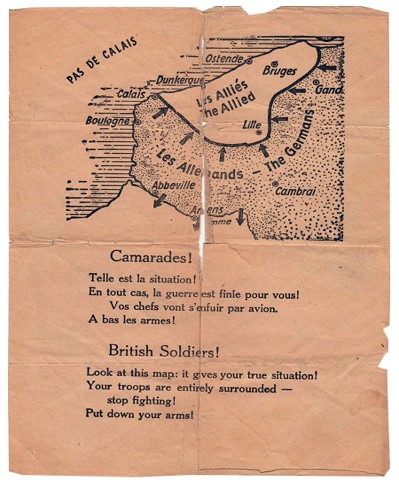 The shelling was causing problems with communications and delivery of supplies.  The concussion effect of exploding shells was repeatedly extinguishing the portable petrol stoves used for catering- these had to be replaced with improvised wood fires in cellars of abandoned town houses.

During the morning of 28th May, a battalion of Green Howards troops passed through the town en-route to Dunkirk.  Unfortunately the lorries carrying the troops halted in the Grand Place, despite the ongoing shelling and air attacks.  Two lorries of the convoy were hit by an air attack, resulting in considerable loss of life and injury, adding to the mayhem and chaos in the town centre.

A few miles to the North of Cassel, the British garrison at Wormhout was overrun and another massacre took place, at the hands of SS troops, resulting in the death of 90 men, mainly of the Royal Warwickshire Regiment.

At Dunkirk, another 17,804 B.E.F. troops were evacuated on the second day of Operation Dynamo.

By now the main German force had crossed the main road from Dunkirk to Cassel and 367 Battery’s northernmost troop was in action for a large part of the day defending the town.  The troop was positioned near to the modern Jardin des Mt Recollets.

The Regiment’s Commanding Officer, Lieut. Colonel C.J. Odling, was wounded here at about midnight 27th/28th May and thereafter Major Christopherson was put in command.  Lt-Col Odling  was incapacitated by his injury and unable to participate in the garrison’s breakout on 29th May.  He was subsequently captured in Cassel.

From 08:00 on the 28th May German infantry could be seen transported in troop carriers to the west of Cassel.  Low-level air attack preceded a tank attack at 10:00.

Troops A, B and C of Major Ronald Cartland’s 209 Battery, 53rd Worcester Regiment anti-tank artillery were posted to Cassel during 23rd-28th May.  They were equipped with the 2-pounder anti tank gun, which unlike the Boyes rifle, proved a highly successful anti-tank weapon in 1940 and probably accounted for over 100 German tank losses in this area.

One of these 2-pounder guns, positioned on the South East of Cassel, destroyed a panzer tank at ‘my campaign’ (see Cassel Aftermath images). 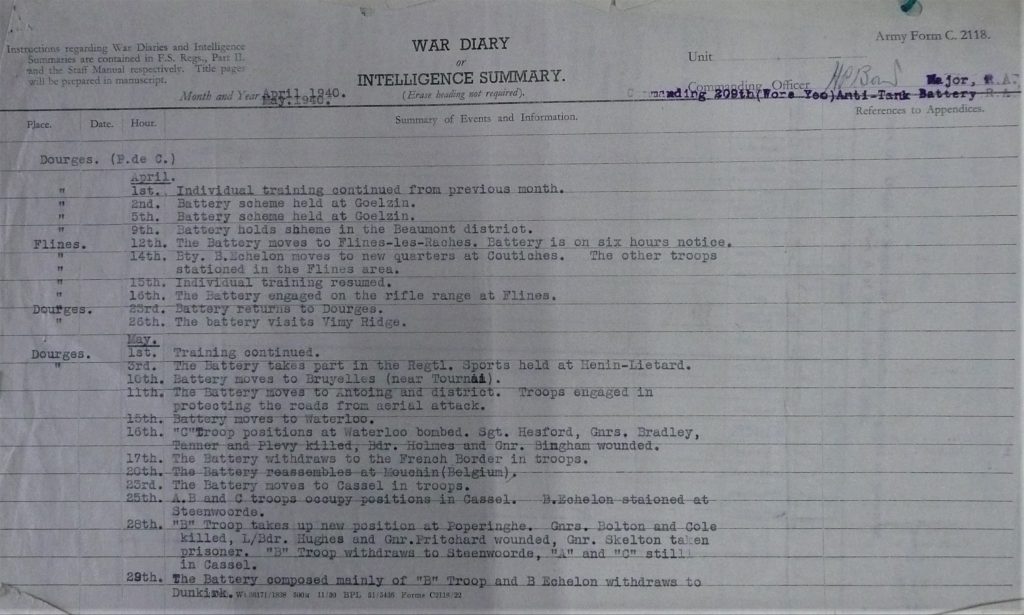 ‘C’ Troop of the 53rd Worcesters under Lieut. Bob Hutton-Squire, quickly destroyed three tanks.  By changing gun positions constantly to alternative sites, his Troop avoided casualties and managed to destroy further tanks.  Sadly, Lt Hutton-Squire was killed two days later, at the age of 31 years, during the breakout and while resisting capture.  Lt. Hutton-Squire is buried at Proven Churchyard, about 3 miles North-east of Watou. 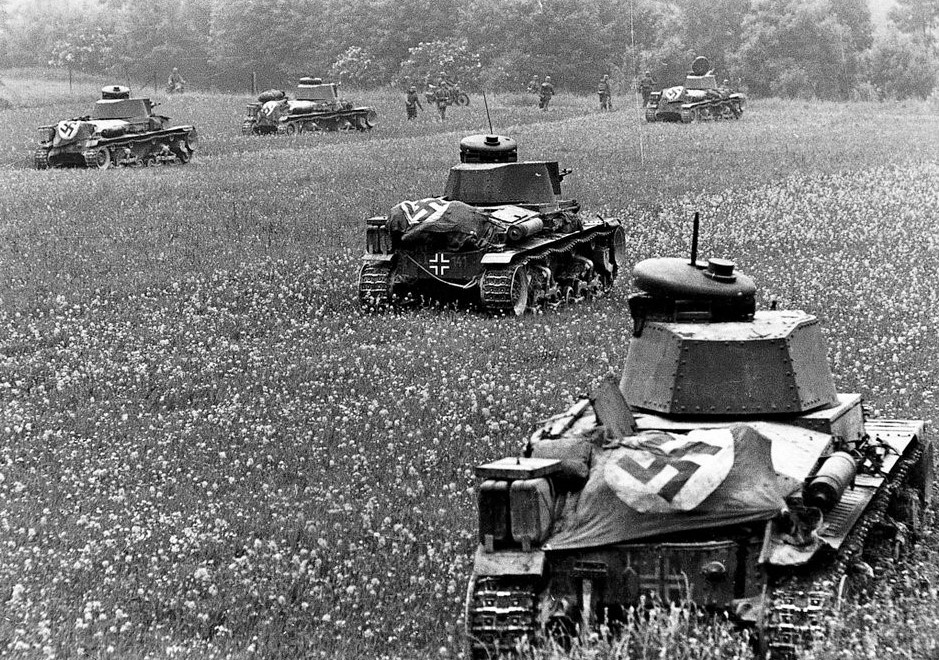 The German attack developed on a wide front, but the resistance of the British guns destroyed another 25 enemy tanks during the afternoon.  The German attack made some progress towards the D948 road down to Steenvoorde, but at 16:30 the attacks ceased.

Another 53rd Worcester Regiment anti-tank troop, commanded by Major Mercer arrived to reinforce the 209 Battery.  Mortaring and air attacks continued, but there was no general attack.  Major Mercer’s visit, just after mid-day, raised the hopes of the defenders that a British counter-attack might develop.

However no such action was planned and a decision had already been made by British HQ staff based at Dunkirk that the Cassel garrison should be evacuated. 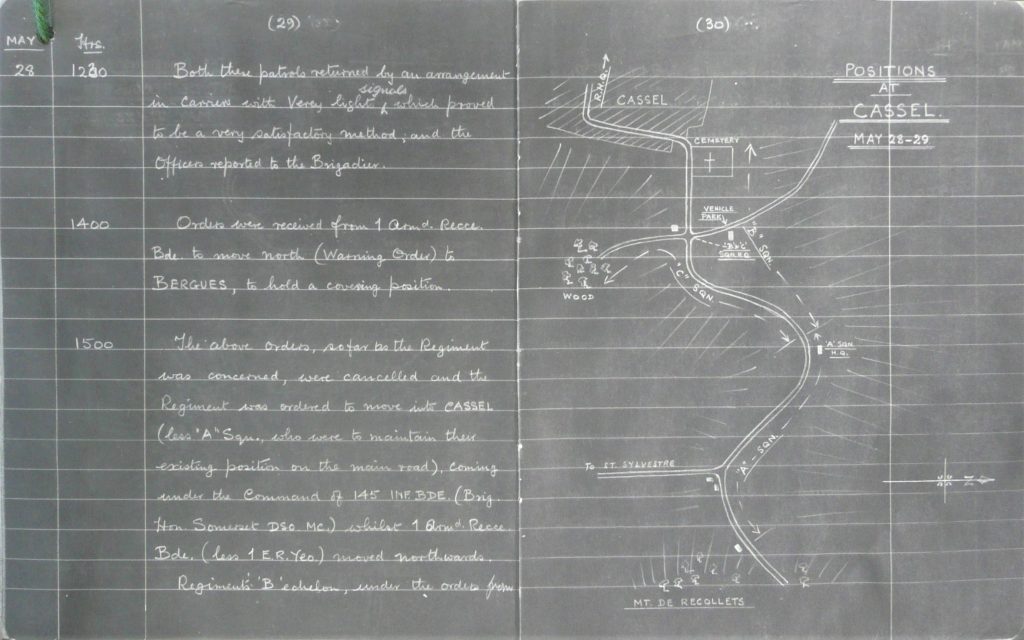 Sketch map from East Yorkshire Yeomanry War Diary showing the new E.Y.R. positions on 28-29th May 1940 as the Mont des Recollets position became untenable. North is orientated to the right.

‘The Brigade was ordered to hold defensive positions at Cassel and Hazebrouck at all costs, to protect the withdrawal of the rest of the British Expeditionary Force (B.E.F.). 1 Bucks were attacked in earnest on 27-28 May and suffered so many casualties that they had ceased to be an effective fighting force.

Their Battalion HQ and HQ Coy were surrounded and eventually overrun on the evening of the 28th. 4 Ox & Bucks and 2 Glosters were also being subjected to enemy attacks at Cassel from 27 May until 29 May, by which time the town was surrounded and the Germans were penetrating the area.

Withdrawal in daylight was impossible, but an evacuation during the evening of 29-30 May was attempted.

However, increasing difficulties in keeping contact during the night and continuing enemy attacks resulted in the majority of the remaining personnel being captured or killed before reaching Dunkirk.

‘The enemy carried out no attacks during this day. The Northernmost Troop fired continuously on enemy Troops seen digging in mortars N.W. of CASSEL. There was no other enemy movement seen during the day. The Commanding Officer, Lieut. Col. C.J. Odling, T.D., had been wounded about midnight 27th/28th May and I was therefore now in command. of the Regiment and I spent most of the day with the 145 Brigade Commander [Somerset].