By 30th May 1940 almost half of the personnel of the 140th Field Regiment had been captured or killed.  Only 14 officers and 287 men (out of a total of 700) returned to England to re-form the Regiment.  Although many of the men of 366 Battery were successfully evacuated, very few of 367 Battery escaped capture and most of the survivors of Cassel spent the remainder of the war as POW’s.

As the most senior surviving Officer, Major Brooks was promoted to Lieutenant-Colonel and tasked with reforming the Regiment.

‘Grand Party‘ describes the unexpectedly warm welcome that the returning 366 Battery received from members of the public at Dover and during the train journey to Kemble in Gloucestershire.

While in Gloucestershire, and after the ‘stiffest of whiskeys’, on Sunday 2nd June, the officers were visited by Queen Mary, who herself had been evacuated from London to nearby Badminton House. 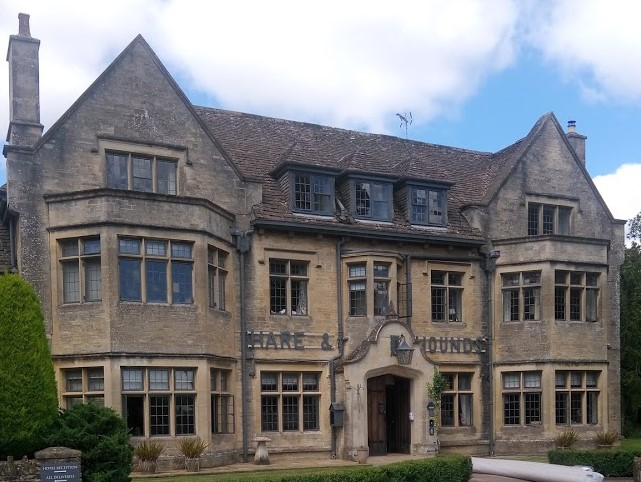 Hare And Hounds Inn, Tetbury, where 366 Battery Officers were billeted after Dunkirk.

During the Royal visit, news began to emerge about the losses that 367 Battery had sustained at Cassel and the fact that most had failed to reach the Dunkirk beachhead.

Two members of 366 Battery died of wounds sustained at Dunkirk shortly after their return to England.

The first task was restoration of morale.  I’m grateful to Martin Felstead for providing a hand-written memorandum addressed to the other surviving Officers. and dated 8th July 1940. 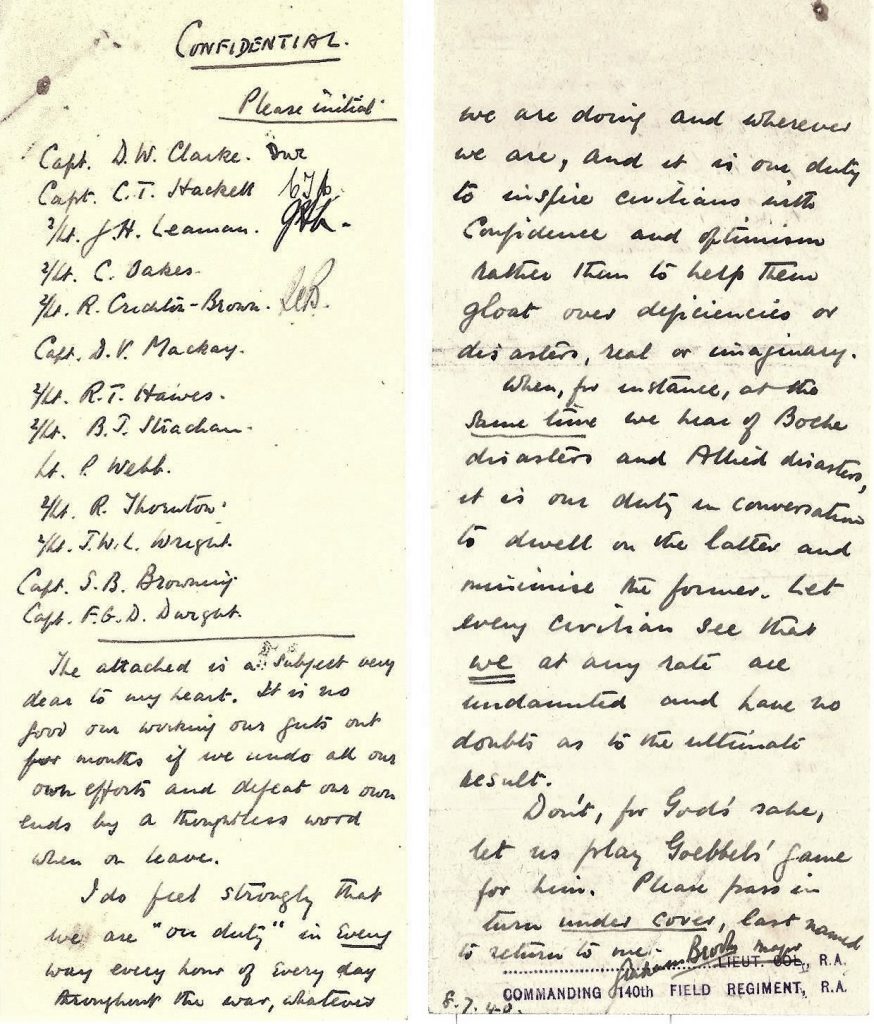 Lt Col Brooks’ Memorandum 8th July 1940. ‘Let every civilian see that we at any rate are undaunted and have no doubts as to the ultimate result. Don’t for God’s sake let us play Goebbels game for him. Please pass in turn under cover, last named to return to me’

After Dunkirk, the priority was the defence of the United Kingdom from the expected invasion and so, despite their recent trauma, there was urgent pressure for the Regiment to re-form.  In mid-June 1940 the men were concentrated away from the invasion front line to join Northern Command at Worksop in Nottinghamshire.  They moved to Sleaford, Lincolnshire on 28th June 1940 and then to Castor, Peterborough in October 1940 where they were re-equipped.

There is a reference in ‘Grand Party‘ to a Concert given at the Empire Theatre, Peterborough on 24th November 1940 by the men of the Regiment.  The original Empire Theatre was damaged by fire in the 1950’s and has now been replaced by the ‘New Theatre’ building on the Broadway, Peterborough. 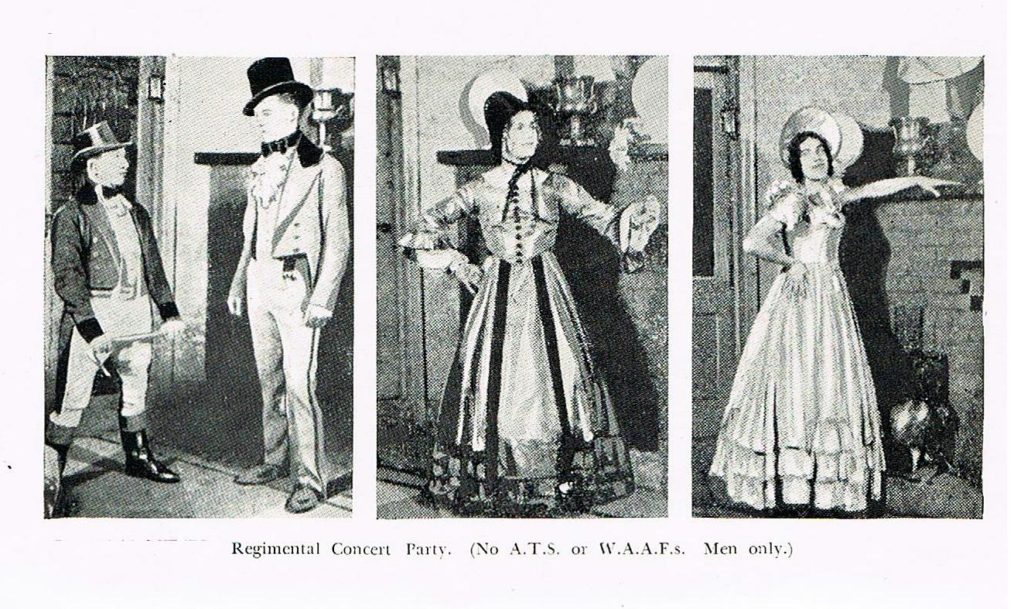 Some of the (all male) cast Regimental Concert Party, Peterborough Empire Theatre, November 1940.  From Grand Party. 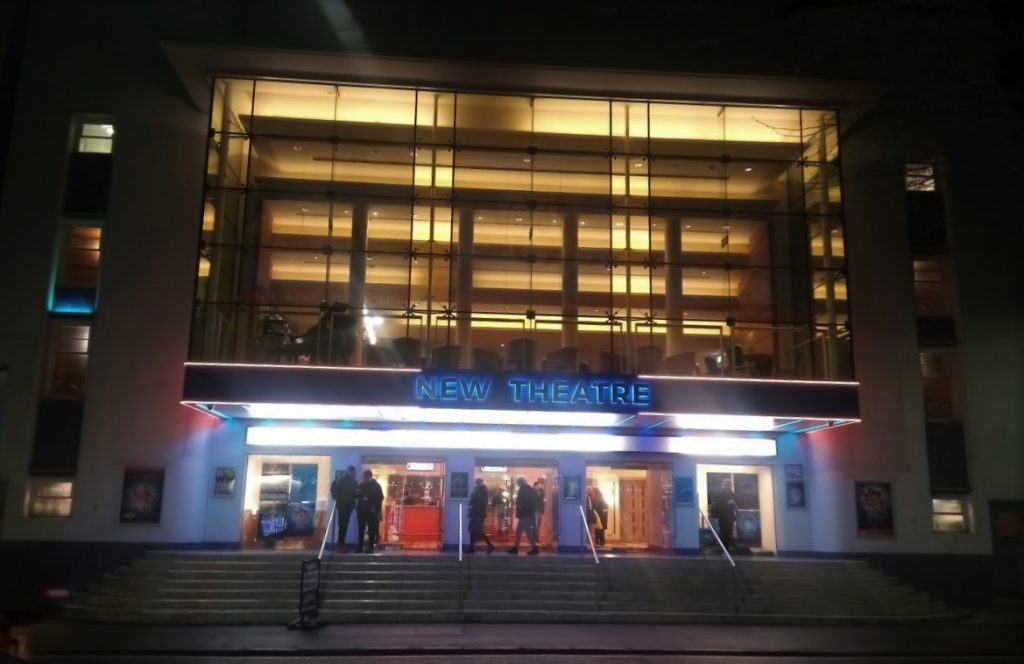 In December 1940, the 140th Regiment moved to re-join Southern command (5th Corps) and was based in Bournemouth under the command of  Lt. Colonel Graham Brooks. By this time the Regiment was equipped with 25-pounder Field guns, a derivative of the original 18-pounder weapon from their 1940 campaign.

The Regiment’s War Diary records various training exercises on the South coast during 1941, including Operation ‘Hotspur’.

In December 1941, after a period of ill-health absences where Major D.W. Clarke assumed temporary command, it appears that command of the Regiment was formally transferred from Lt. Col. Brooks to Lt. Col. T.F.K. Howard.

Brooks, suffering from the lung complications possibly related to his experiences at Dunkirk, was invalided out of the British Army.  His ‘Grand Party‘ book was written during this period. 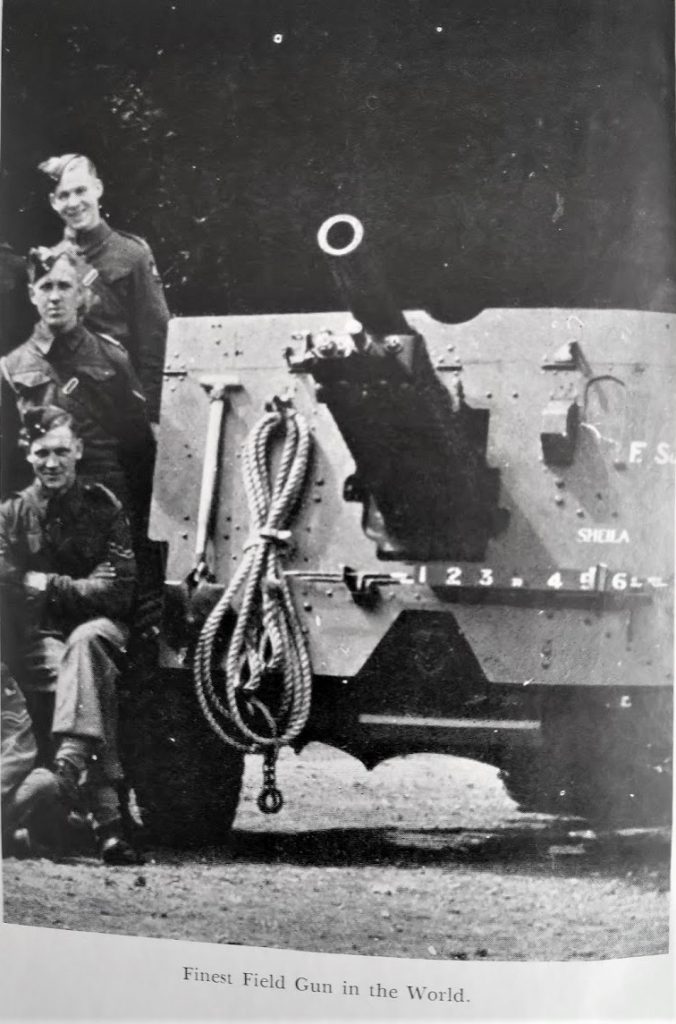 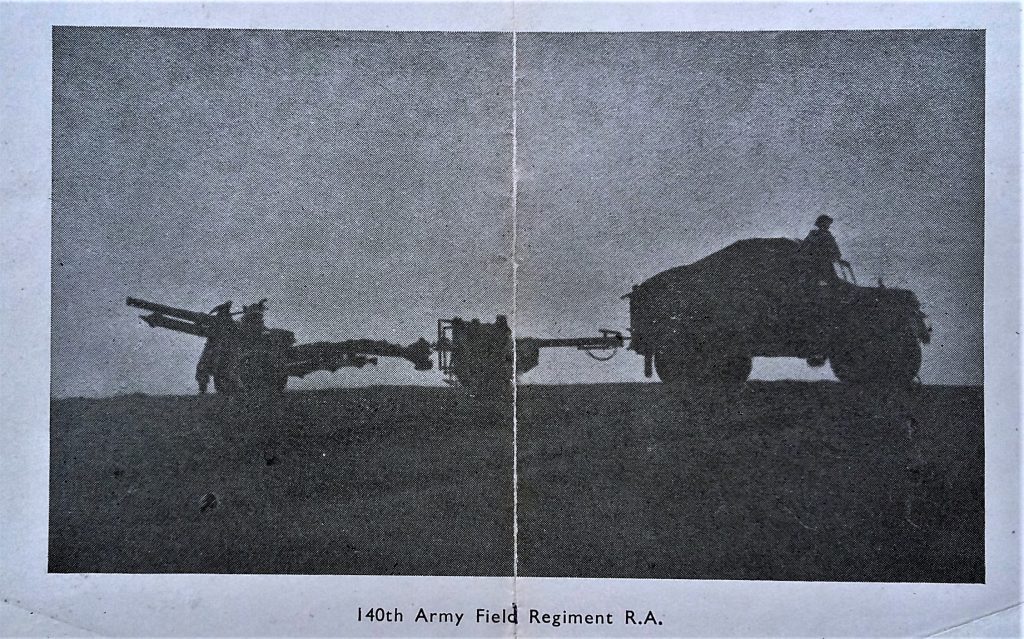 The re-formed 366 Battery, including Dunkirk survivors and new recruits, photographed in Devon in 1941.  Image from RA archives.

The newly equipped 366 Battery became operational in early 1941, and was based in Southern England until June 1941, when 366 Battery’s first wartime mission was to contribute as an independent force to the Allied military garrison in Iceland.

In January 1943, 178th Regiment sailed from Liverpool to India and from there, after acclimatisation and equipped with 3.7 inch Howitzers, took part in the Burma campaign.  After the Japanese defeat, the 178th Regiment RA remained in action in the Far East until 1946.

The few remaining men of the original 367 Battery were joined by 504 and 518 Batteries, they were equipped with 25-pounder field guns and this new force kept the designation 140th Field Regiment, R.A.

Officers in bold had served in Belgium & France in 1940. With thanks to Martin Felstead.

The Regiment went to Algeria in January 1943 as part of 2nd Army Group Royal Artillery (AGRA). The Regiment fought in the battles at Bou Arada in February 1943 and remained in North Africa until the end of the Allied campaign in May 1943. 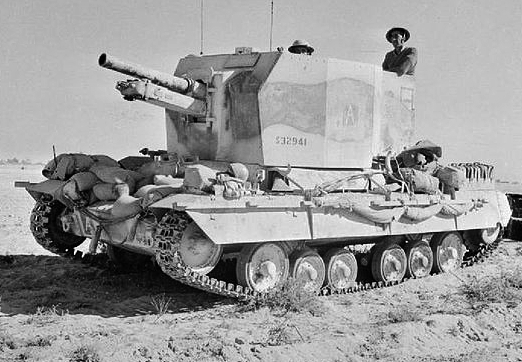 At the end of the North African campaign the Regiment was converted to a Medium Regiment with 4.5″ Guns, in the process losing 504 Battery to 75 Heavy Regiment. 140th Medium Regiment (367 & 518 Batteries) then landed in Italy in January 1944 and took part in most of the significant battles of the Italian Campaign.

In December 1944, five years after its formation in London as a Territorial unit, the 140th (5th London) Field Regiment, Royal Artillery was finally disbanded.

Martin Felstead has obtained a slightly ghostly looking post-war photograph of a 140th Regiment officers’ re-union dinner, taken at a London Hotel in 1949.  It’s possible that the ‘unknowns‘ at the top table were members of the Royal Horse Artillery, who had fought alongside them at Cassel and were also famous for the action of K Battery, RHA at nearby Hondeghem. 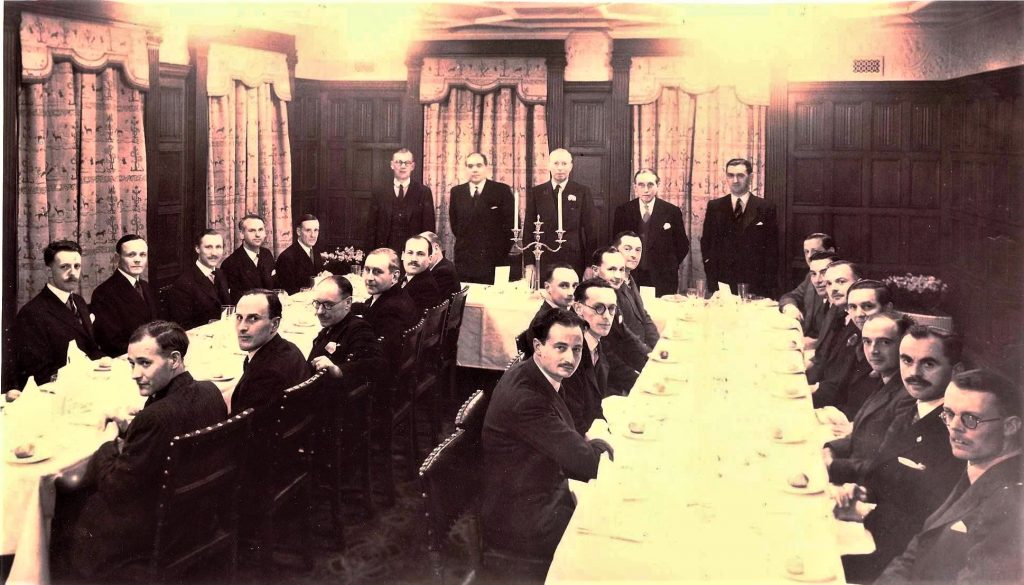 Officers of the Regiment re-united in London, 1949.

Right Table – Left side (nearest to furthest): unknown; V. Scott; A. Prior; W Fernie; A Lavender

A series of annual reunions took place in a room in a public house in London for the men in the Regiment until the 1990’s.  The annual reunions started in 1947 originally for members of 504 Battery.  Each year, on a Saturday evening in May around the time of the FA Cup Final, they would meet in a pub in London where they had an informal buffet style meal, some had travelled considerable distances to be there.

Francis Jones organised the 1947 meeting, a role he continued for a further 50 years until the 1990’s.  During the war, after his army training, Jones himself had been posted in 1944 from the UK to 504 Battery in Italy as part of 75 Heavy Regiment, and so he never actually served with the original 140th Regiment.

Although it wasn’t a formal club or association as such,  Jones maintained a contact list, managed the communications and collected the money.  He had been a school teacher in his post-war civilian life and was highly organised.  The reunions were later opened to all with any link to the 140th Regiment.  There was apparently a great sense of camaraderie.

Voluntary donations were sent in by men not able to attend and those that did show up paid on the day.  A small surplus fund had built up over time and Francis Jones was able to subsidise old comrades where necessary.

As the years passed, and the attendees aged, so the event was moved to a Saturday afternoon.  In the 1990’s the meetings were held in London at the Cock Tavern, Great Portland Street and it is here that Sergeant Frank Felstead, with  his son Martin, reconnected with his old comrades. 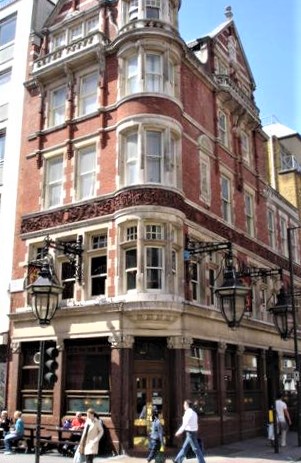 At the meetings, formal group photos were taken and copies of these pictures, along with a newsletter, was sent out to all on his mailing list later in the year.  As the years rolled by, sadly health issues became a larger part of the news.

When men died Jones and others would attend their funerals if possible.  Sadly, I was unaware of the existence of this group when organising the funeral for my father, Staff Sergeant Eric West R.A., R.A.O.C., in 1992.

‘A Short History of 140 Regiment and its Component Parts’

This document, summarising the many and various actions of the original 140th Regiment and its successors, was produced by one of the veterans of the Regiment for the Reunion meetings that took place in the early 1990’s.